Famous As: One of the Most Influential and Highest-Grossing Actresses of Hollywood
Born On: June 20, 1967
Born In: Honolulu, Hawaii, United States
Founder / Co Founder: Blossom Films
Age: 55 Years
One of the evergreen stars of Hollywood, Nicole Kidman is a famous Australian actress and film producer. Kidman shot to fame with her breakthrough roles in âDead Calmâ and âBangkok Hiltonâ. She gained global recognition through her roles in blockbusters such as âDays of Thunderâ, âBatman Foreverâ, âFar and Awayâ, âMoulin Rouge!â and âThe Hoursâ. Her endless list of accolades includes honors such as âAcademy Awardsâ, âAustralian Film Institute Awardsâ, âBAFTA Awardsâ, âGolden Globe Awardsâ, âMTV Movie Awardsâ, âSaturn Awardsâ along with several other nominations for various prestigious awards. Kidman also received a star on the âHollywood Walk of Fameâ and âSwedish Walk of Fameâ for her excellence in the field of acting. Many may not be aware of her credentials in the world of music. With her collaborations with the likes of Robin Williams and Ewan McGregor in hit singles such as âSomethin' Stupidâ and âCome What Mayâ, she rose to the top of U.K charts. Kidman represents UNICEF and UNIFEM since 1994 and 1996 respectively. Here is a compilation of quotes and sayings by the popular Australian diva which have been scanned from the vast sea of her work. Take a look at the most famous quotations and thoughts by Nicole Kidman that will inspire you to aim for stars.
Listed In:
Film & Theater Personalities
Actresses 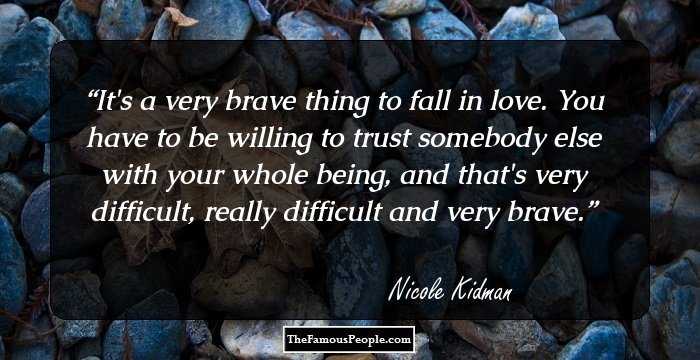 It's a very brave thing to fall in love. You have to be willing to trust somebody else with your whole being, and that's very difficult, really difficult and very brave. 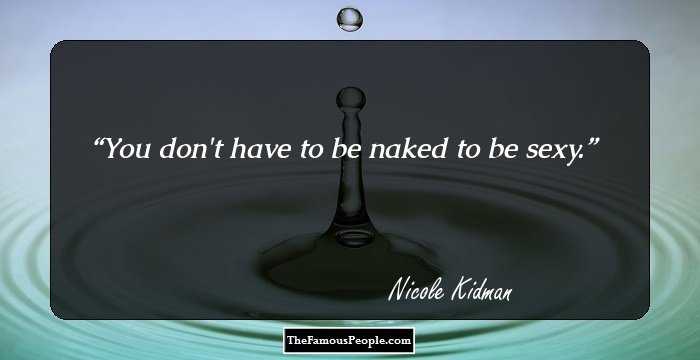 You don't have to be naked to be sexy. 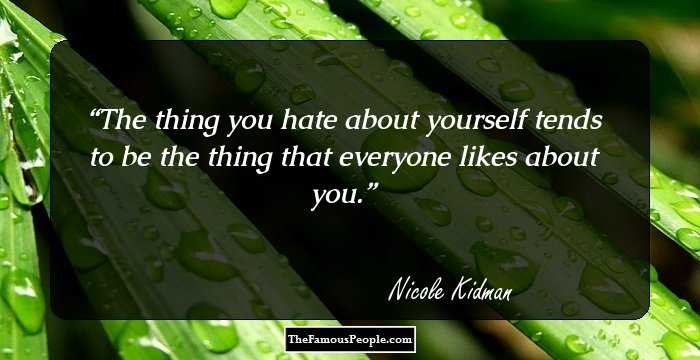 The thing you hate about yourself tends to be the thing that everyone likes about you.

You Yourself
Nicole Kidman 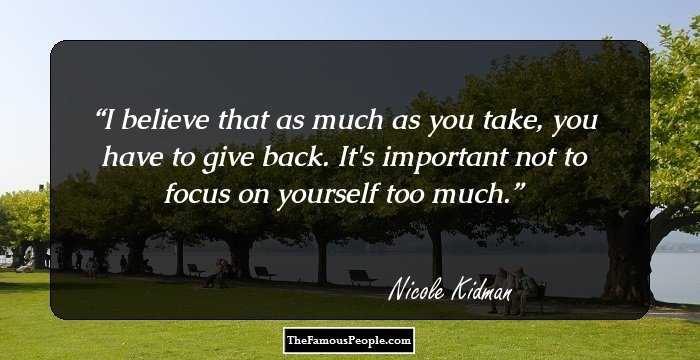 I believe that as much as you take, you have to give back. It's important not to focus on yourself too much.

You Yourself Believe I
Nicole Kidman 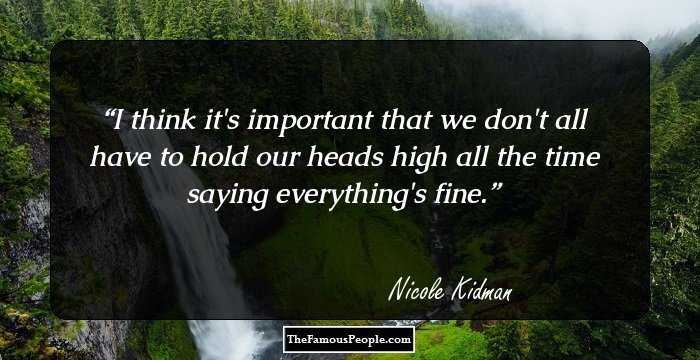 I think it's important that we don't all have to hold our heads high all the time saying everything's fine. 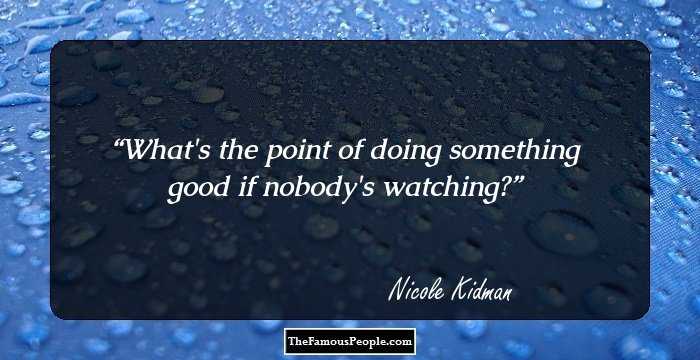 What's the point of doing something good if nobody's watching? 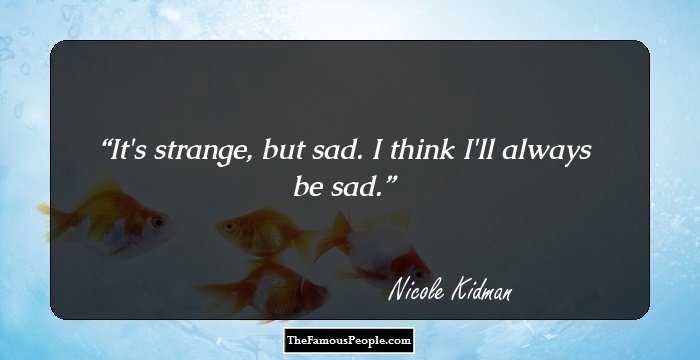 It's strange, but sad. I think I'll always be sad. 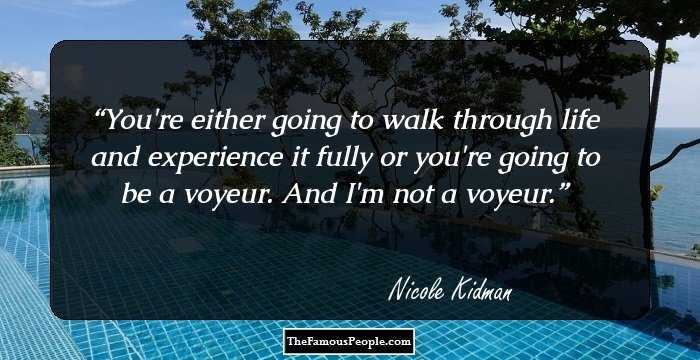 You're either going to walk through life and experience it fully or you're going to be a voyeur. And I'm not a voyeur. 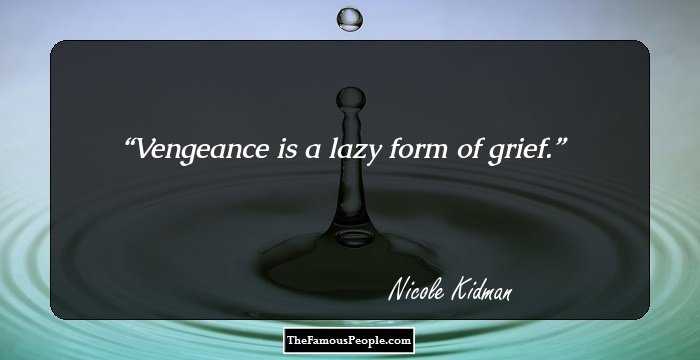 Vengeance is a lazy form of grief. 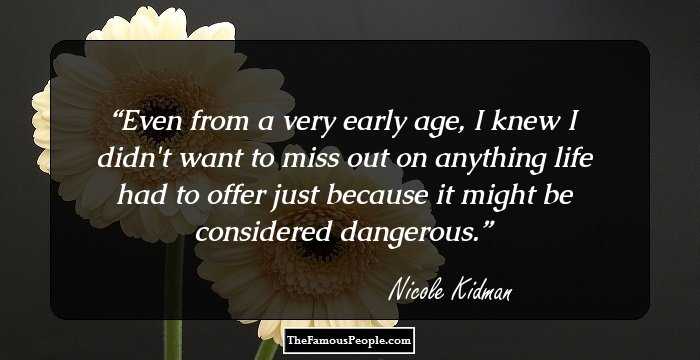 Even from a very early age, I knew I didn't want to miss out on anything life had to offer just because it might be considered dangerous.