Famous As: Actress and Singer Best Known for Playing 'Santana Lopez' on 'Glee (2009-2015)'
Born On: January 12, 1987
Died On: July 8, 2020
Born In: Valencia, Santa Clarita, California, United States
Died At Age: 33
Naya Rivera was a distinguished American singer, model, and actress. She began her career as a child actress and model, appearing in a number of national television commercials. At the age of four, she appeared in âThe Royal Family.â At the age of five, she bagged in a âYoung Artist Awardâ nomination. Her breakthrough came with âGlee,â for which she earned critical acclaim and was nominated for three âGrammy Awards.â âAt the Devilâs Doorâ marked her film debut. We bring to you a collection of quotes by Naya Rivera which have been excerpted from her songs, thoughts, movies, interviews, lyrics and dialogues. Scroll through some popular quotes by Naya Rivera on character, beauty, love, books, life, Instagram, time, people, passion, music, talent, etc.
Listed In:
Singers
Film & Theater Personalities
Actresses
Fashion 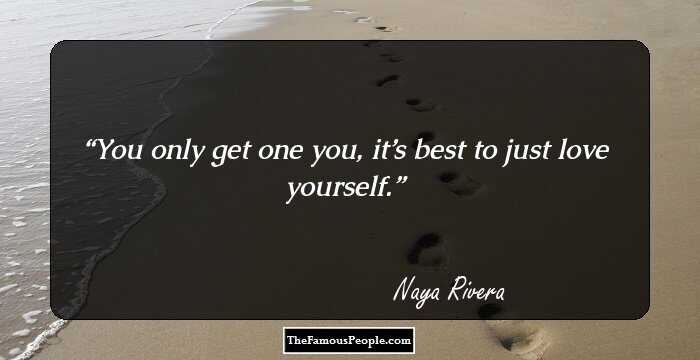 You only get one you, itâs best to just love yourself. 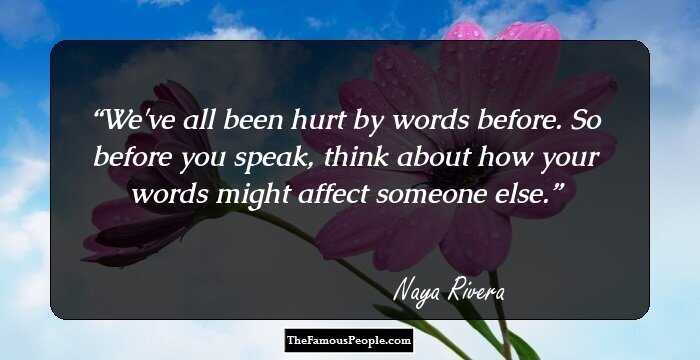 We've all been hurt by words before. So before you speak, think about how your words might affect someone else. 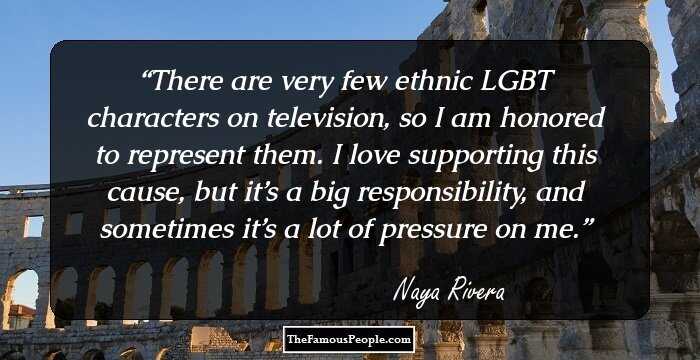 There are very few ethnic LGBT characters on television, so I am honored to represent them. I love supporting this cause, but itâs a big responsibility, and sometimes itâs a lot of pressure on me. 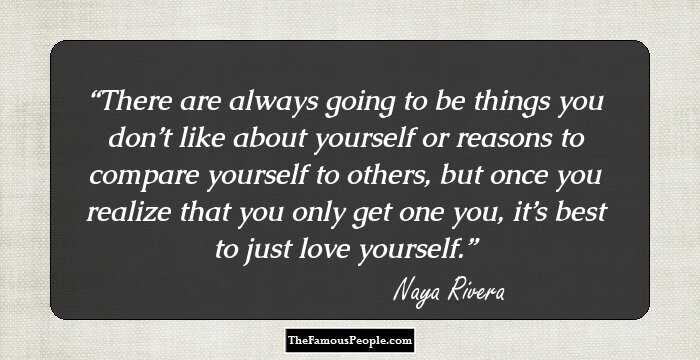 There are always going to be things you donât like about yourself or reasons to compare yourself to others, but once you realize that you only get one you, itâs best to just love yourself. 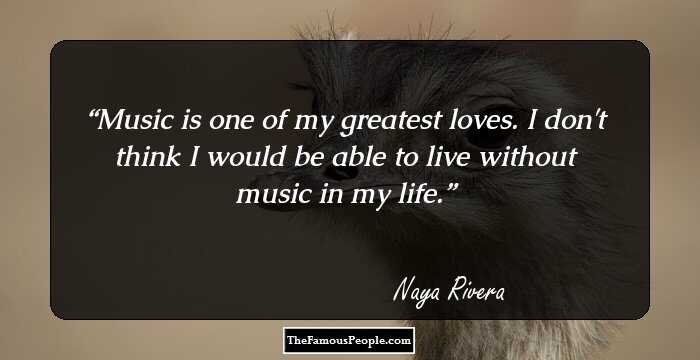 Music is one of my greatest loves. I don't think I would be able to live without music in my life. 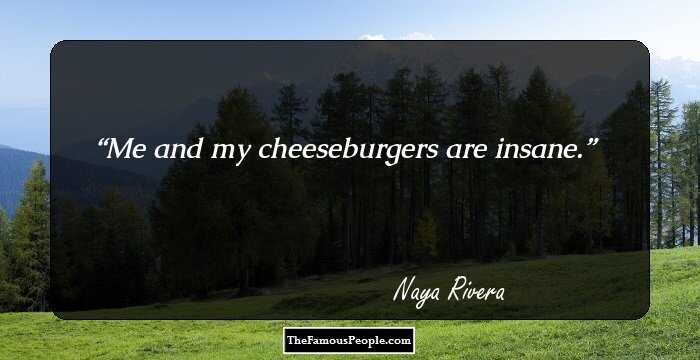 Me and my cheeseburgers are insane. 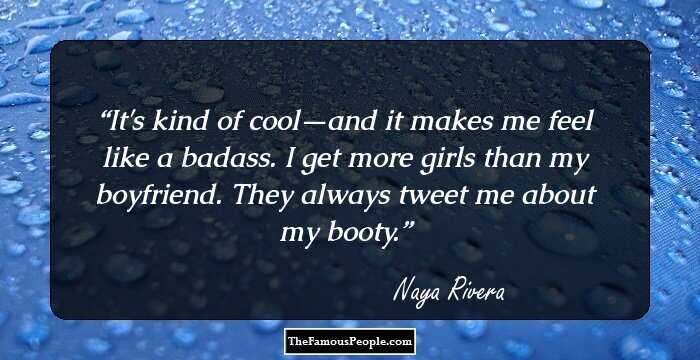 It's kind of coolâand it makes me feel like a badass. I get more girls than my boyfriend. They always tweet me about my booty. 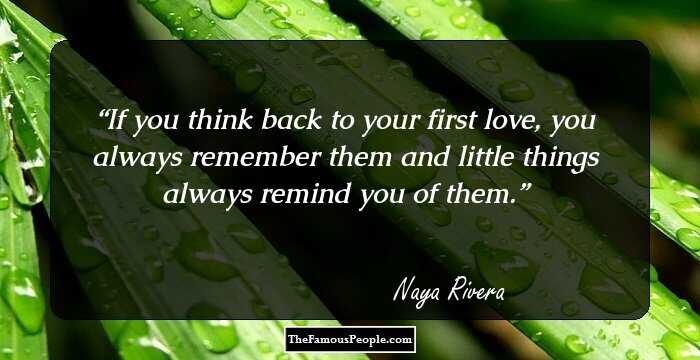 If you think back to your first love, you always remember them and little things always remind you of them. 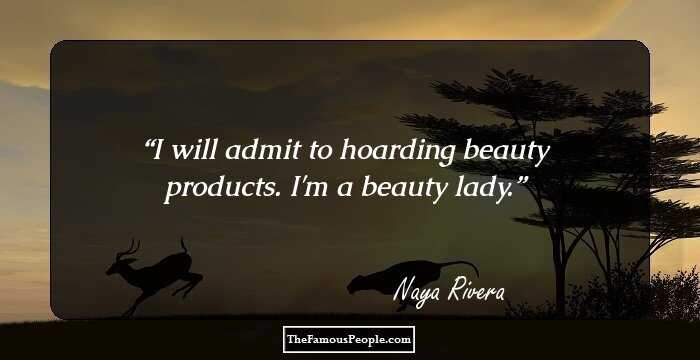 I will admit to hoarding beauty products. I'm a beauty lady. 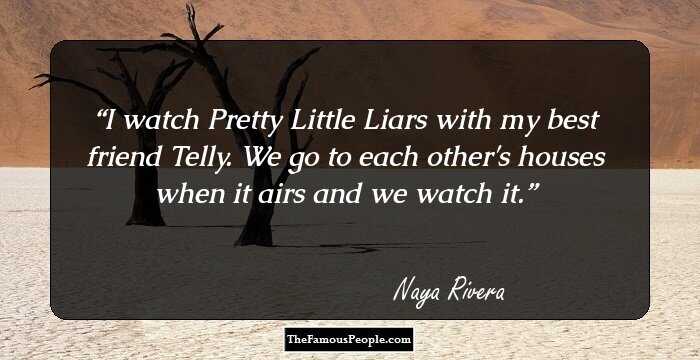 I watch Pretty Little Liars with my best friend Telly. We go to each other's houses when it airs and we watch it. 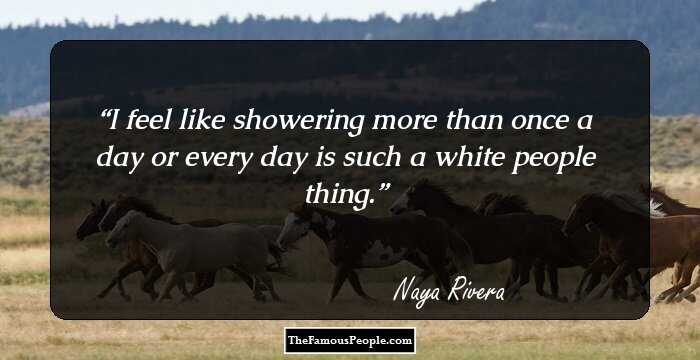 I feel like showering more than once a day or every day is such a white people thing. 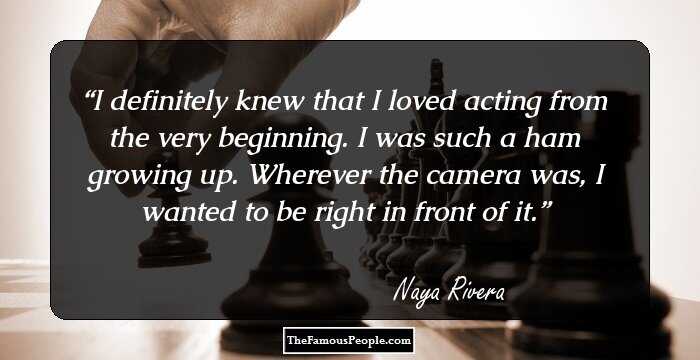 I definitely knew that I loved acting from the very beginning. I was such a ham growing up. Wherever the camera was, I wanted to be right in front of it. 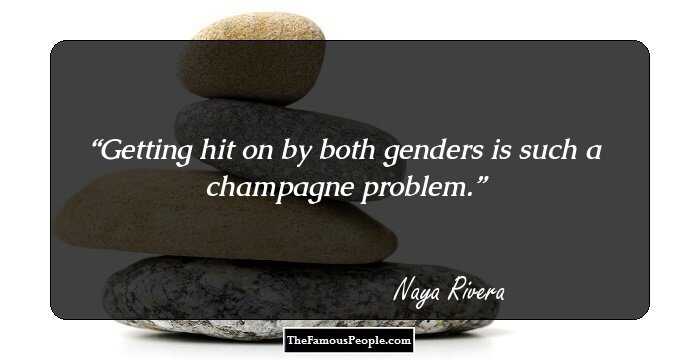 Getting hit on by both genders is such a champagne problem. 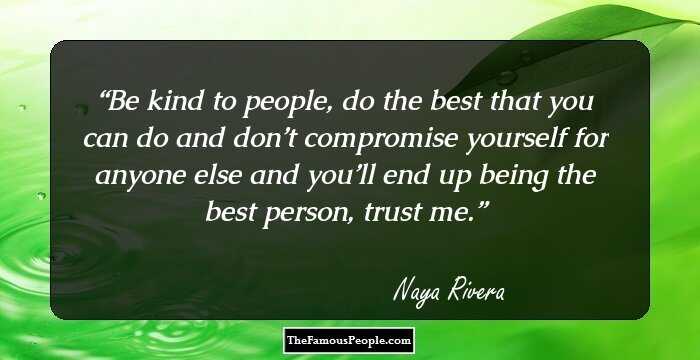 Be kind to people, do the best that you can do and donât compromise yourself for anyone else and youâll end up being the best person, trust me. 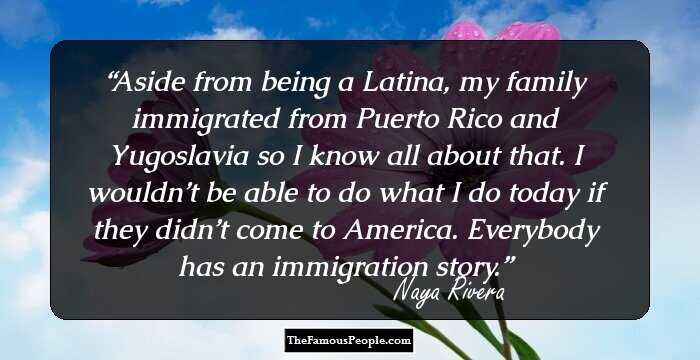 Aside from being a Latina, my family immigrated from Puerto Rico and Yugoslavia so I know all about that. I wouldnât be able to do what I do today if they didnât come to America. Everybody has an immigration story.

Going to regular public high school and working and auditioning was really, really tough. I never really fit in and hit the stride that all the other kids were on. Instead of going out and hanging out with my friends at that age, I remember being in my bedroom and putting on like a Christina Aguilera tape and just like belting. And seeing if I could hit every single note just like her.

Honestly, I never thought I'd actually be playing a teen lesbian. I didn't think it was going to go this far. But I'm glad that it did, because there have been a lot of fans who have expressed that they've been going through similar situations in their lives.

I can relate to girls with self esteem issues because growing up in this industry there is the side of you that is obsessed with perfection. You want to please everyone because if you don't, you won't get the job. There is always someone prettier, smarter, or a better actor that you. You start to nit-pick everything. That perfectionism kicks in and it can take over your life if you let it. You have to get comfortable with yourself. Then, if you get the job, it is an added bonus.

The day that I got the phone call to tell me that I booked âGleeâ I was shooting âCSI Miami.â I was playing this heroin addictâ¦Iâd been on a million auditions where I sang and looked exactly the same way and didnât do anything different. And so for this to be the one that popped it was just like what happened? It was the perfect timing and the perfect role for me. It was like everything came together.