Famous As: Prime Minister of Libya (1970-72)
Born On: June 7, 1942
Died On: October 20, 2011
Born In: Qasr Abu Hadi, Libya
Died At Age: 69
Colonel Gaddafi or Muammar Gaddafi was a well-known Libyan politician and revolutionary. From 1969 to 1977, he ruled Libya as âRevolutionary Chairmanâ then he switched to serve as the âBrotherly Leaderâ from 1977 to 2011. Since an early age, he showed the signs of becoming a revolutionary despite coming from an underprivileged family. âNational Transitional Councilâ was a result of Gaddafiâs increased dominance, violation of human rights, and support to international terrorism that eventually dethroned Gaddafi and led to his end. Following is a list of sayings and quotes by Muammar Gaddafi. Read through the thoughts and quotes by Muammar Gaddafi from his nearly four decades in power.
Listed In:
Leaders 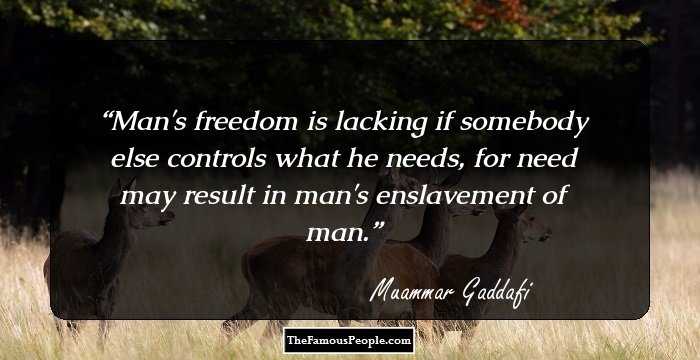 Man's freedom is lacking if somebody else controls what he needs, for need may result in man's enslavement of man. 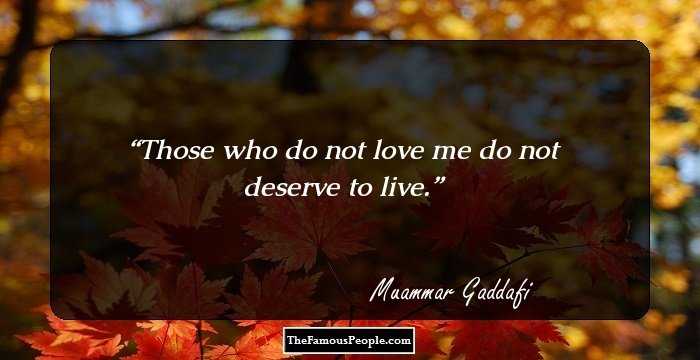 Those who do not love me do not deserve to live. 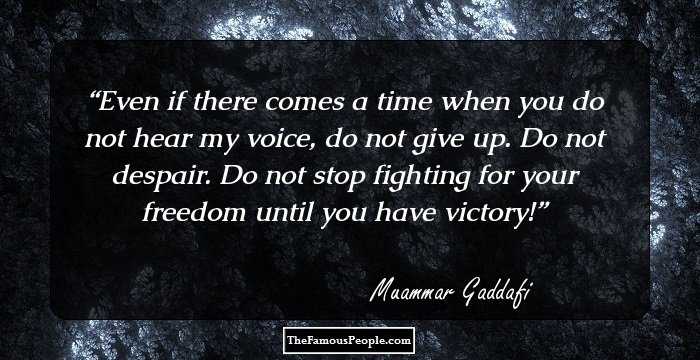 Even if there comes a time when you do not hear my voice, do not give up. Do not despair. Do not stop fighting for your freedom until you have victory! 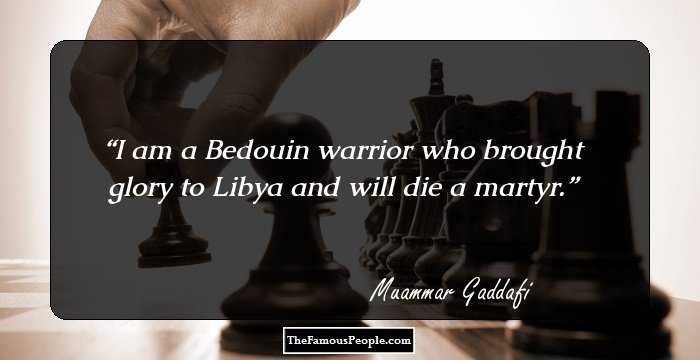 I am a Bedouin warrior who brought glory to Libya and will die a martyr. 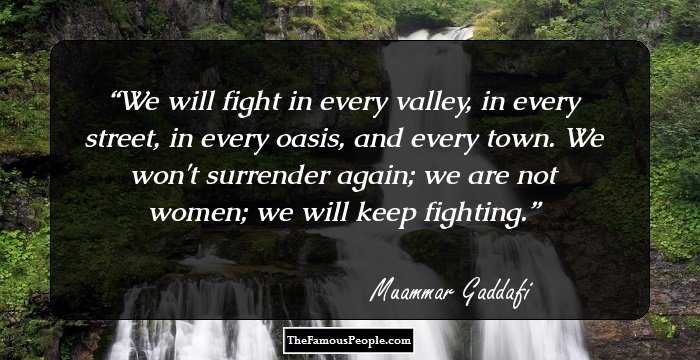 We will fight in every valley, in every street, in every oasis, and every town. We won't surrender again; we are not women; we will keep fighting. 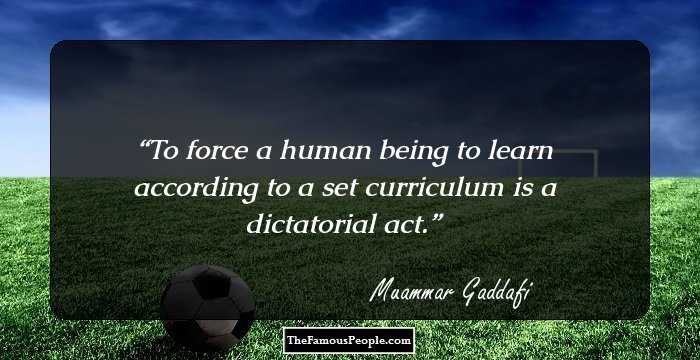 To force a human being to learn according to a set curriculum is a dictatorial act. 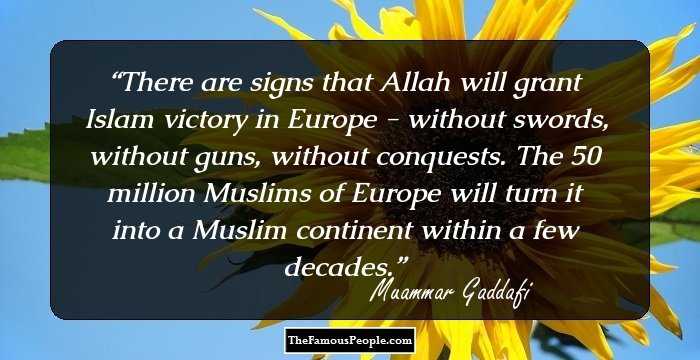 There are signs that Allah will grant Islam victory in Europe - without swords, without guns, without conquests. The 50 million Muslims of Europe will turn it into a Muslim continent within a few decades. 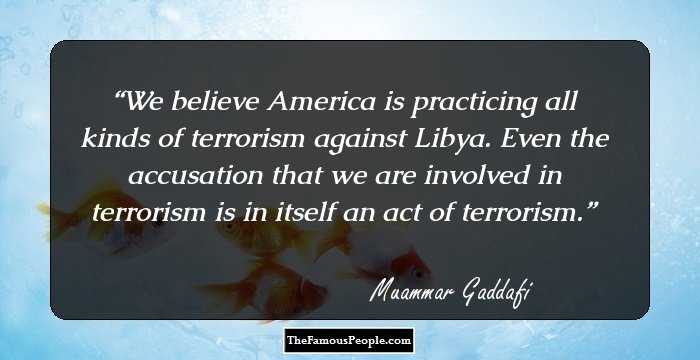 We believe America is practicing all kinds of terrorism against Libya. Even the accusation that we are involved in terrorism is in itself an act of terrorism. 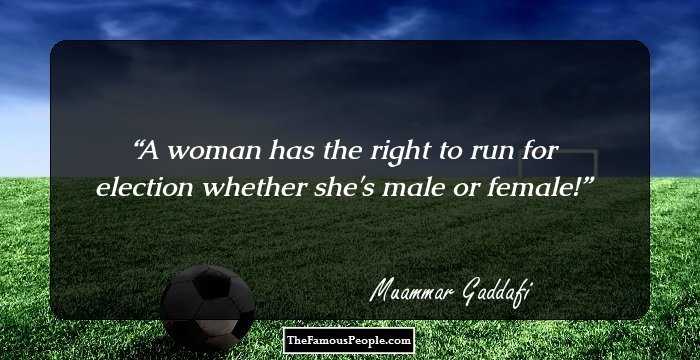 A woman has the right to run for election whether she's male or female! 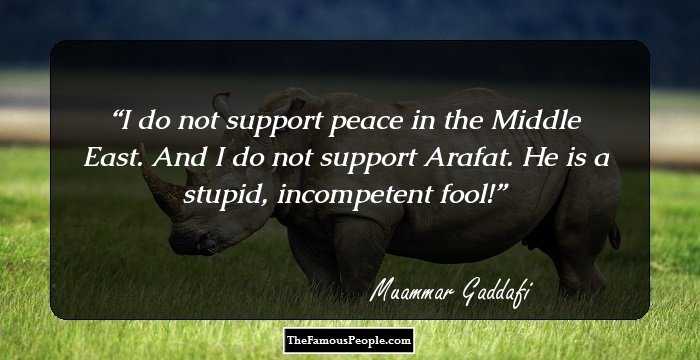 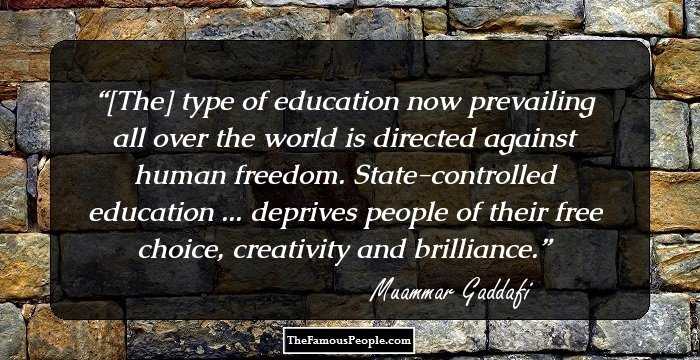 [The] type of education now prevailing all over the world is directed against human freedom. State-controlled education ... deprives people of their free choice, creativity and brilliance. 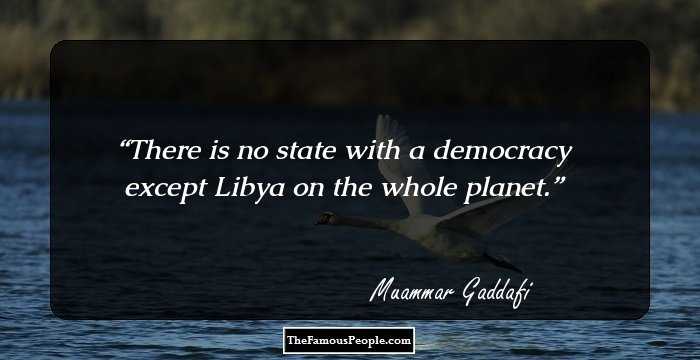 There is no state with a democracy except Libya on the whole planet. 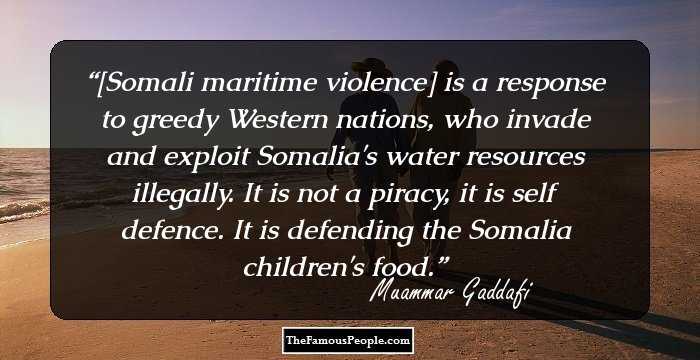 [Somali maritime violence] is a response to greedy Western nations, who invade and exploit Somalia's water resources illegally. It is not a piracy, it is self defence. It is defending the Somalia children's food. 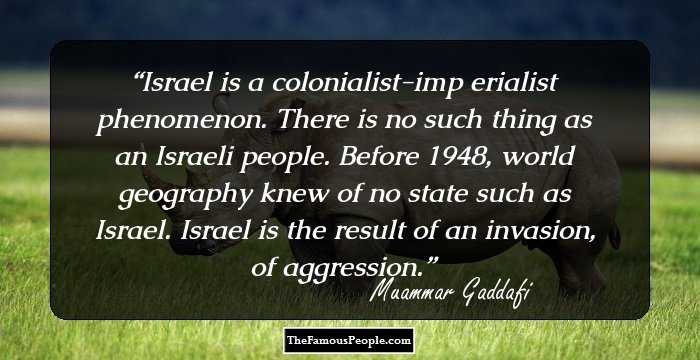 Israel is a colonialist-imp erialist phenomenon. There is no such thing as an Israeli people. Before 1948, world geography knew of no state such as Israel. Israel is the result of an invasion, of aggression. 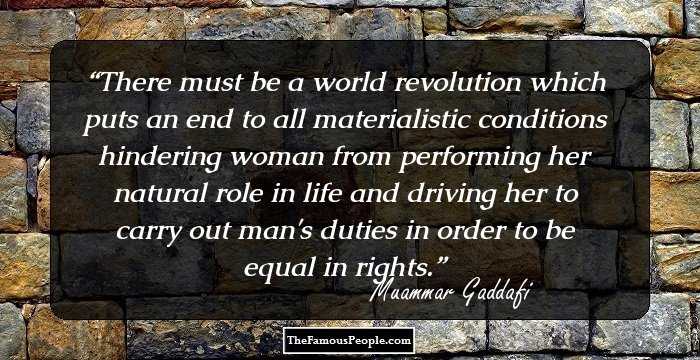 There must be a world revolution which puts an end to all materialistic conditions hindering woman from performing her natural role in life and driving her to carry out man's duties in order to be equal in rights. 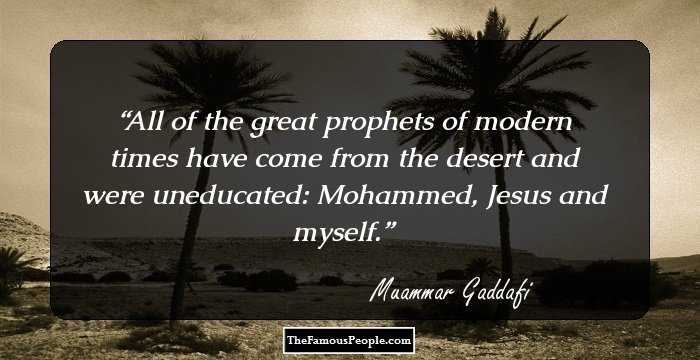 All of the great prophets of modern times have come from the desert and were uneducated: Mohammed, Jesus and myself. 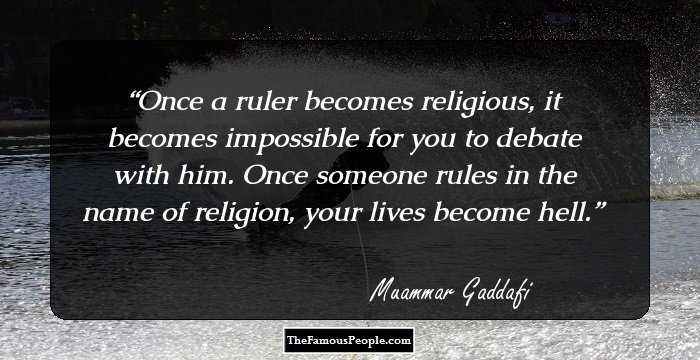 Once a ruler becomes religious, it becomes impossible for you to debate with him. Once someone rules in the name of religion, your lives become hell. 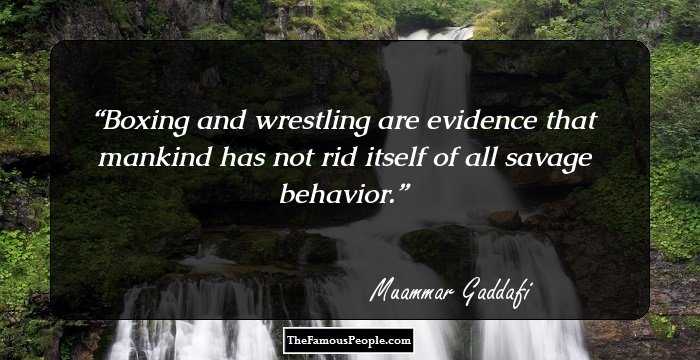 Boxing and wrestling are evidence that mankind has not rid itself of all savage behavior.

Americans are good people. They have no aggressions against us and they like us as we like them. They must know I don't hate them. I love them. I hear it is a complex society inside. Many Americans don't know about the outside world. The majority have no concern and no information about other people. They could not even find Africa on a map. I think Americans are good, but America will be taken over and destroyed from the inside by the Zionist lobby. The Americans do not see this. They are getting decadent. Zionists will use this to destroy them.

There are serious mistakes, among them the one saying that Jesus came as a messenger for other people other than the sons of Israel.... Christianity is not a faith for people in Africa, Asia, Europe and the Americas. Other people who are not sons of Israel have nothing to do with that religion.... It is a mistake that another religion exists alongside Islam. There is only one religion which is Islam after Mohammed.... All those believers who do not follow Islam are losers.

Let the free people of the world know that we could have bargained over and sold out our cause in return for a personal secure and stable life. We received many offers to this effect but we chose to be at the vanguard of the confrontation as a badge of duty and honour. 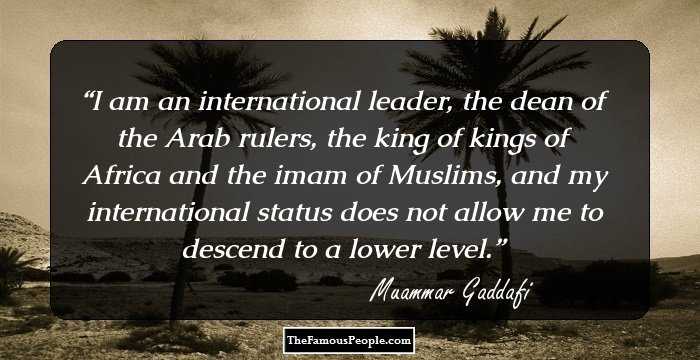 I am an international leader, the dean of the Arab rulers, the king of kings of Africa and the imam of Muslims, and my international status does not allow me to descend to a lower level.

During my term in AU, I will initiate an organised compensation claim for Africa and I will fight for a greater voice for Africa in the United Nations Security Council. If they do not want to live with us fairly, it is our planet and they can go to another planet.

I am defending the Jews to prevent them from becoming extinct, because they are doomed to become extinct if they continue this way.... I am convinced that the solution is to establish a democratic state for the Jews and the Palestinians, a state that will be called Palestine, Isratine, or whatever they want. This is the fundamental solution, or else the Jews will be annihilated in the future, because the Palestinians have [strategic] depth.

When everyone is part of the people's congress, what need is there for an opposition? Opposition to what? You oppose a government! If there is no government, and the people govern themselves on their own, what are they going to oppose? Something that isn't there? 16 Selected quotes by Marcus Gravey, The Proponent of The Pan-Africanism Movement