Louis Vuitton was a distinguished French fashion designer and businessman. Initially a box-maker and packer, Louis Vuitton later founded the iconic brand. Vuitton left his home at the age of 13 and walked 292-mile to reach Paris where he took an apprentice in the workshop of box-maker Monsieur Marechal. Within few years he gained the reputation amongst Parisâs elite and fashionable class. His fortunes rose when he was appointed as the trunk-maker to Empress EugÃ©nie de Montijo. This position opened an avenue to new class of royal and nonpareil clientele. We bring to you the most noteworthy quotes and thoughts by the maker of the worldâs most valuable luxury brand. Following is a collection of notable and well-known sayings and quotations by Louis Vuitton that will surely inspire you to follow your dreams. 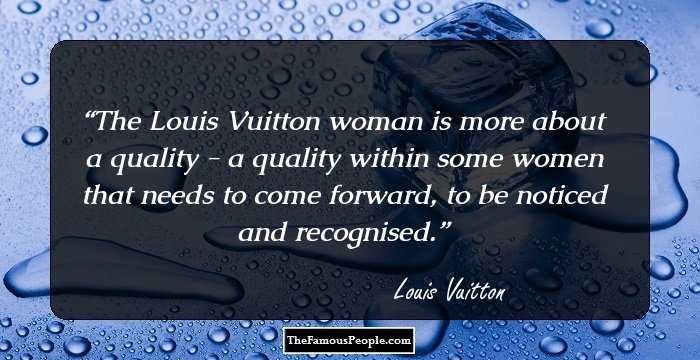 The Louis Vuitton woman is more about a quality - a quality within some women that needs to come forward, to be noticed and recognised. 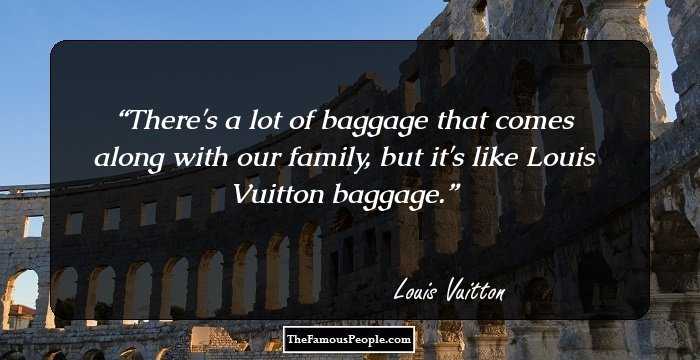 There's a lot of baggage that comes along with our family, but it's like Louis Vuitton baggage. 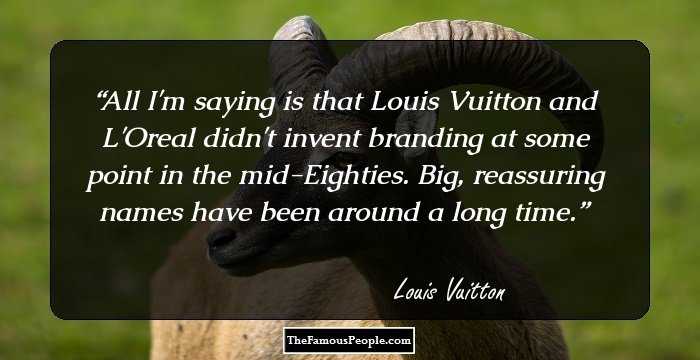 All I'm saying is that Louis Vuitton and L'Oreal didn't invent branding at some point in the mid-Eighties. Big, reassuring names have been around a long time. 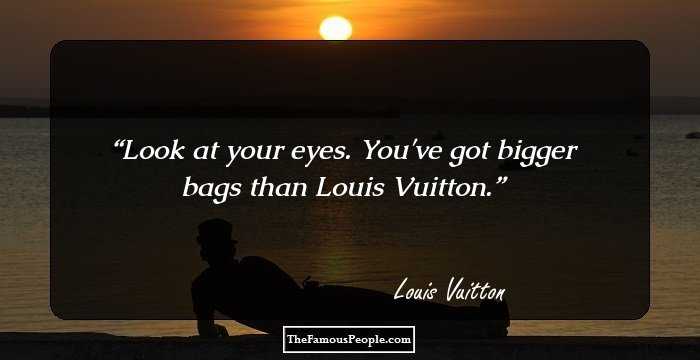 Look at your eyes. You've got bigger bags than Louis Vuitton. 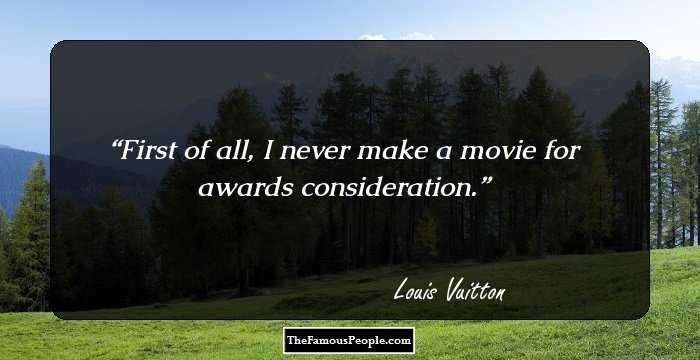 First of all, I never make a movie for awards consideration. 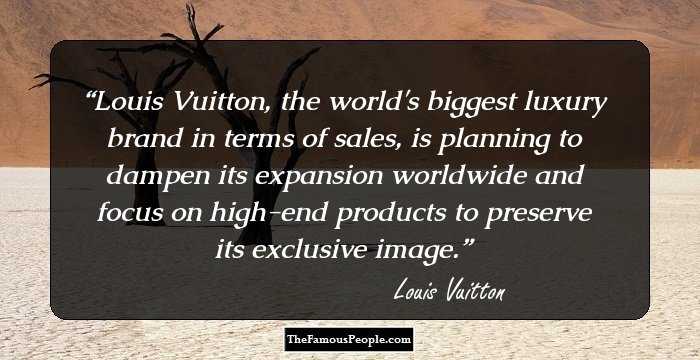 Louis Vuitton, the world's biggest luxury brand in terms of sales, is planning to dampen its expansion worldwide and focus on high-end products to preserve its exclusive image. 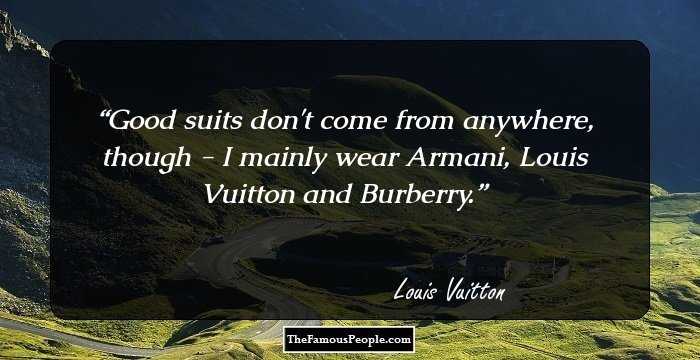 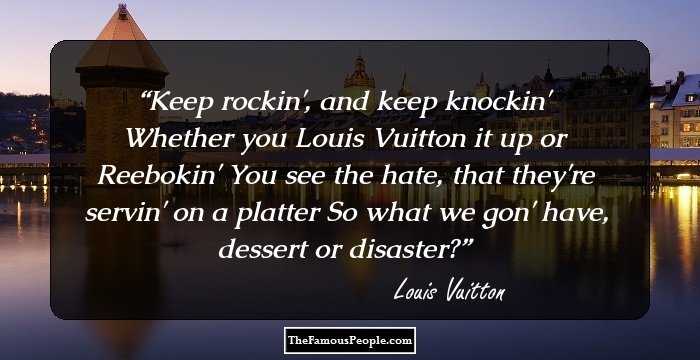 Keep rockin', and keep knockin' Whether you Louis Vuitton it up or Reebokin' You see the hate, that they're servin' on a platter So what we gon' have, dessert or disaster?

I used to have a fake Louis Vuitton bag because I thought it meant something in life. But now I realize that all the things in the world don't define you. It's what you stand for, what you're willing to do, how close to the truth you're willing to be in your life.

I'm very interested in fashion shows. For me they're at the center of everything. What happens on the side, that's the energy - it's fashion week - but fashion shows are at the heart of it. I function more like a stylist. I'm inspired, and then I try to find it on the street. What's great about a blog is that you can do completely crazy things like take the moustache shoes Marc Jacobs did for Louis Vuitton for spring and talk about what that has to do with moustaches. In fashion, what people are looking for is inspiration and new ideas all the time.

I don't think there is just one Louis Vuitton woman. That is why, for the fall/winter 2011 show, I loved the idea of lots of different characters - a wife, a mistress, a girlfriend - stepping out of the row of hotel elevators.

Everything comes back around. You never thought Louis Vuitton and Gucci and all that other stuff would come back. You know what I mean? And now it's one of the highest brands there is out. Everything just comes right back into circulation. Baggy jeans might come back out again. Might be a while, but they might.

I'm Kan, the Louis Vouitton don / Bought my mom purse, now she Louis Vuitton mom / Still might throw on a little low arm they want me to stop go on gon / They don't want me to shop and me spending that hard / Oh My God is that a Black card / I turned around and replied why yes, but I prefer the term African American Express

But give up my business? The same business I'd built from the ground up with my own two hands and designer Louis Vuittons? The same business for which I'd sacrificed blood, sweat, and tears? Well, maybe not sweat and tears, but there was blood. Lots of blood. Give it up? Not likely. Besides, what else would I do? I totally should've gone to Hogwarts when I had the chance.

I don't want to sound too silly or pretentious about this, but, you know, I love being in Paris. I love working at Louis Vuitton. I love fashion. That's why I do it. No one's forcing me to do this. And nobody forces anyone to buy it. It's a real love affair.

I have a passion for modern and contemporary art. I spend a lot of time in museums; I particularly like the Guggenheim, MoMA in New York or LACMA and the Getty Museum in Los Angeles, for example. I cannot wait for the Louis Vuitton Foundation to open. 20 Colonel Sanders Quotes To Fire Up The Entrepreneur In You