Brian Todd Collins, popular by moniker Kid Ink, is a popular American rapper, record producer, songwriter and singer. Ink drew inspiration from the music and work ethics of Swizz Beatz, Timbaland and Pharrell Williams and started composing beats when he was just 16. He also attended after school music programs in order to polish his craft. He produced soundtracks for Sean âDiddyâ Combs, Sean Kingston and Nipsey Hu$$le to name a few. At the age of 22, he started his career as a professional rapper. In 2010, he released his first official mixtape, âWorl Tourâ. His debut studio album âUp & Awayâ stood at number 2 position on the âUS Rap Albumsâ chart. The movie âFurious 7â featured his song âRide Outâ in their soundtrack. Here is the hip-hop quotes and sayings collection by the famous rapper which have been excerpted from his songs, writings, lyrics, work, thoughts, tweets and interviews. Presenting the quotes and thoughts by Kid Ink. 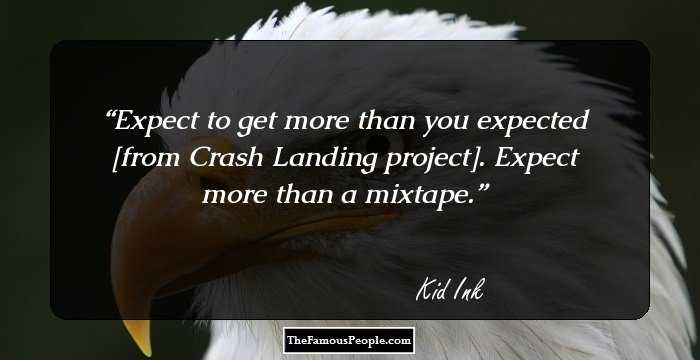 Expect to get more than you expected [from Crash Landing project]. Expect more than a mixtape. 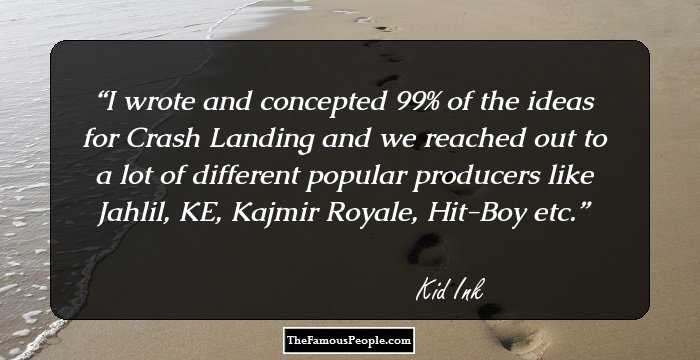 I wrote and concepted 99% of the ideas for Crash Landing and we reached out to a lot of different popular producers like Jahlil, KE, Kajmir Royale, Hit-Boy etc. 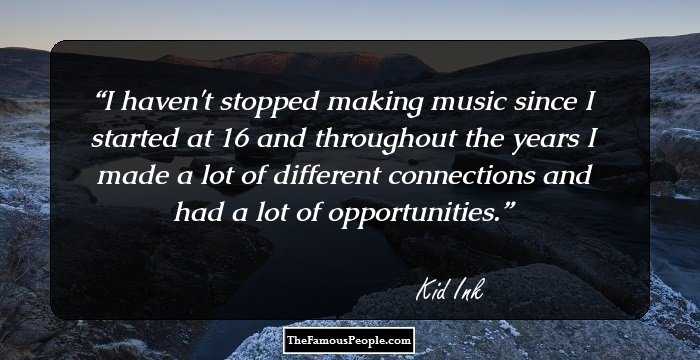 I haven't stopped making music since I started at 16 and throughout the years I made a lot of different connections and had a lot of opportunities. 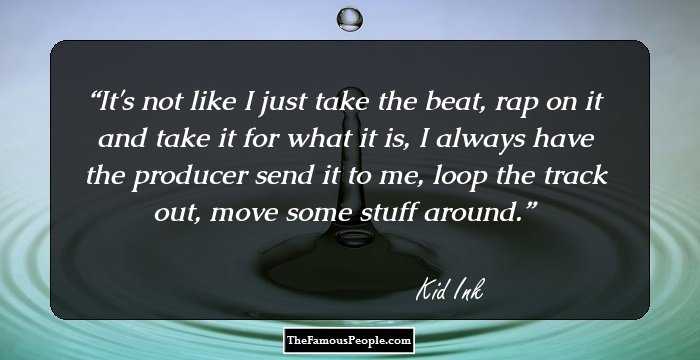 It's not like I just take the beat, rap on it and take it for what it is, I always have the producer send it to me, loop the track out, move some stuff around. 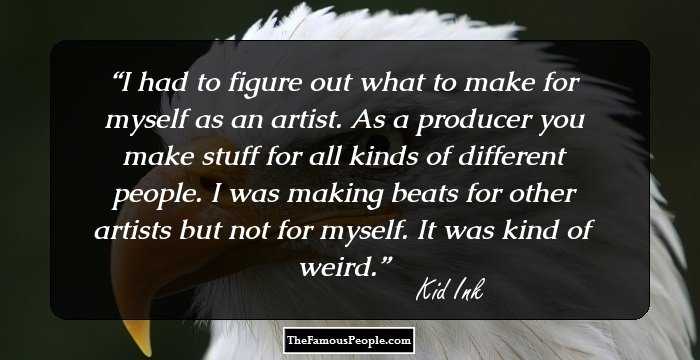 I had to figure out what to make for myself as an artist. As a producer you make stuff for all kinds of different people. I was making beats for other artists but not for myself. It was kind of weird.

You I
Kid Ink 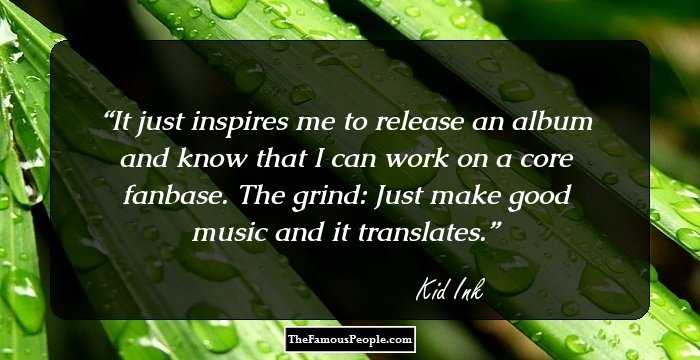 It just inspires me to release an album and know that I can work on a core fanbase. The grind: Just make good music and it translates.

Me Music I
Kid Ink 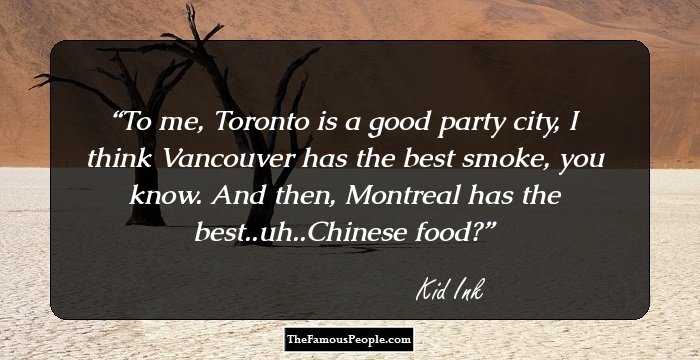 To me, Toronto is a good party city, I think Vancouver has the best smoke, you know. And then, Montreal has the best..uh..Chinese food?

You Me Think I
Kid Ink 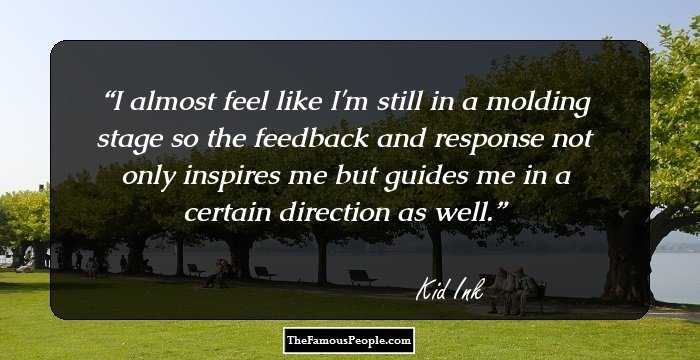 I almost feel like I'm still in a molding stage so the feedback and response not only inspires me but guides me in a certain direction as well. 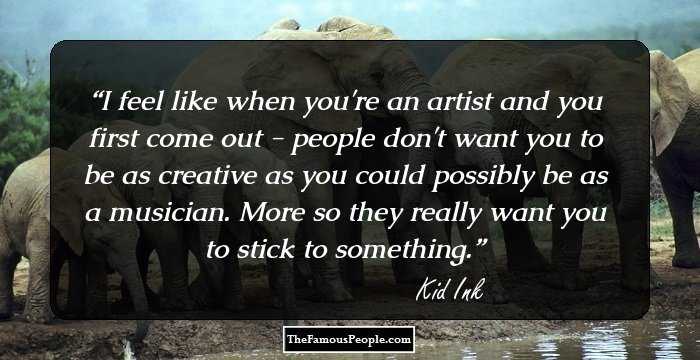 I feel like when you're an artist and you first come out - people don't want you to be as creative as you could possibly be as a musician. More so they really want you to stick to something. 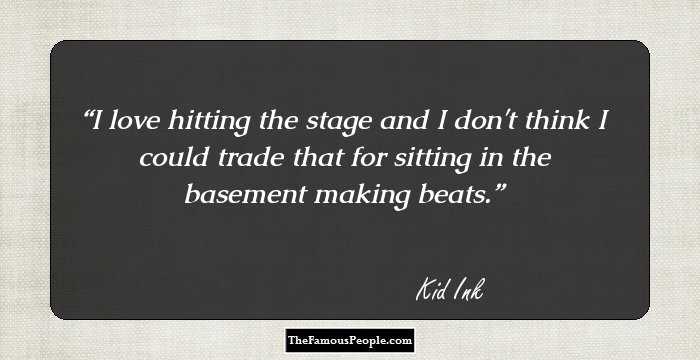 I love hitting the stage and I don't think I could trade that for sitting in the basement making beats. 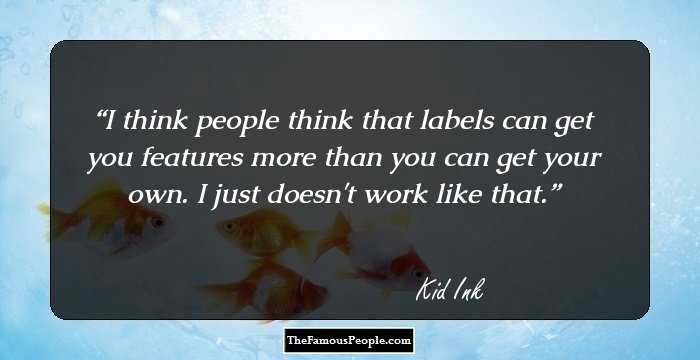 I think people think that labels can get you features more than you can get your own. I just doesn't work like that. 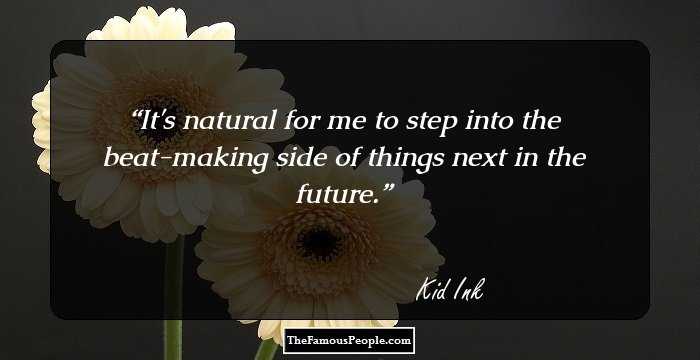 It's natural for me to step into the beat-making side of things next in the future. 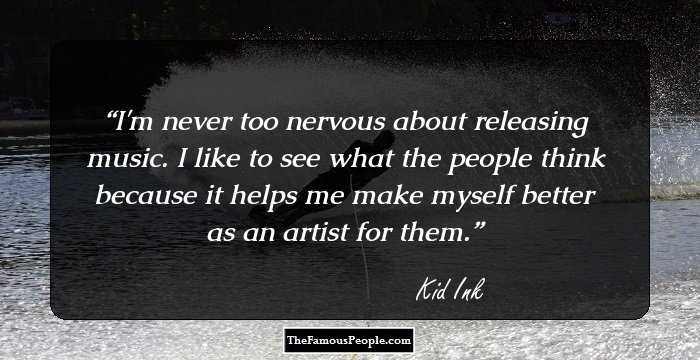 I'm never too nervous about releasing music. I like to see what the people think because it helps me make myself better as an artist for them. 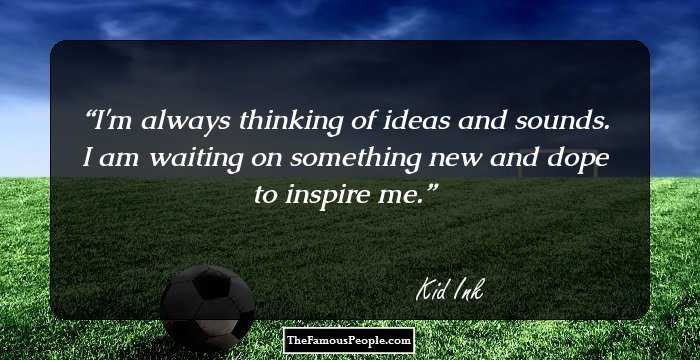 I'm always thinking of ideas and sounds. I am waiting on something new and dope to inspire me.

Me I
Kid Ink 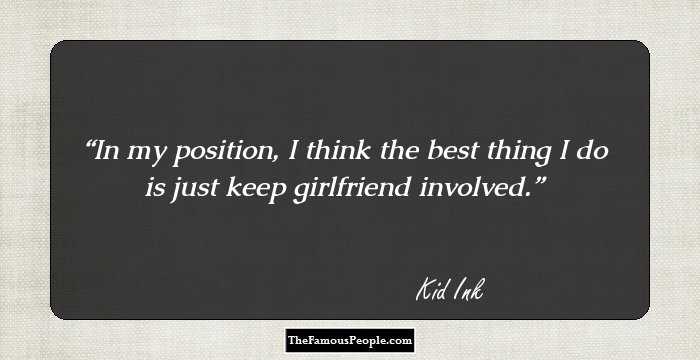 In my position, I think the best thing I do is just keep girlfriend involved. 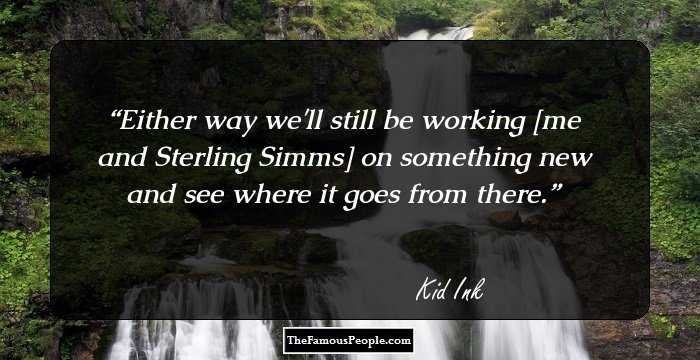 Either way we'll still be working [me and Sterling Simms] on something new and see where it goes from there. 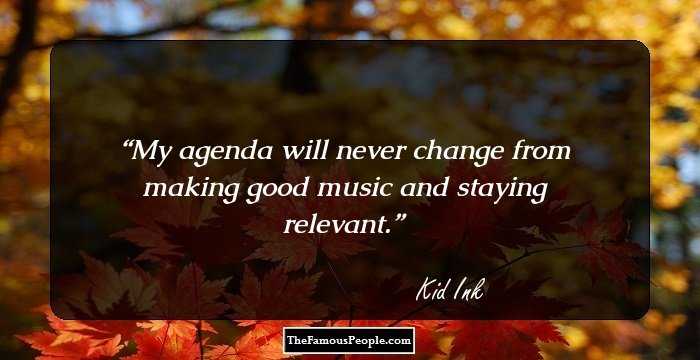 My agenda will never change from making good music and staying relevant. 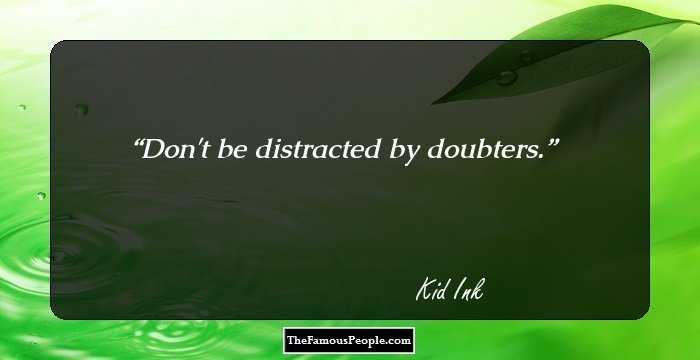 Don't be distracted by doubters. 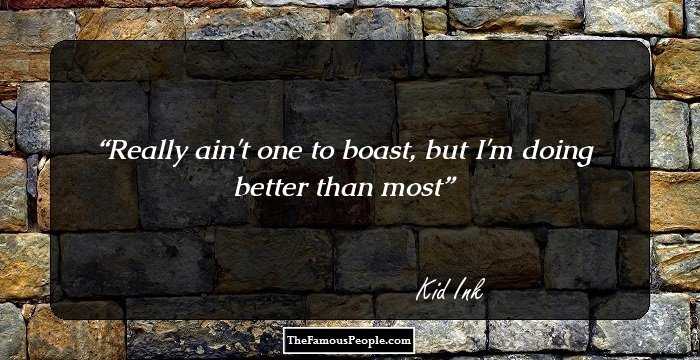 Really ain't one to boast, but I'm doing better than most 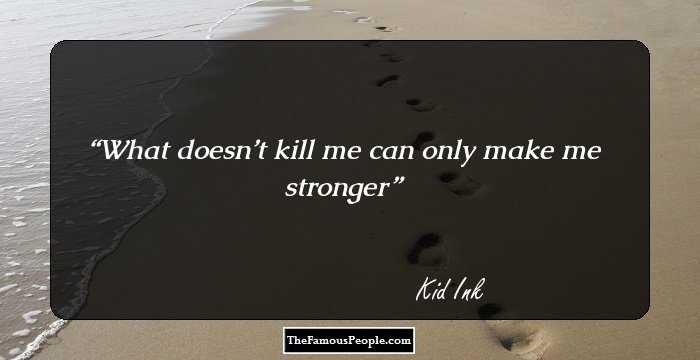 What doesnât kill me can only make me stronger

When I was first introduced to the music business, I learned how to make beats. All my friends rapped, but nobody made beats. So since I didn't do either at the time, I thought it would make more sense and I would be more valuable to the team as the in house producer.

It was a proud moment in giving me the confidence, that I was 'stamped' in the offices as much, you know, as I would get from the streets. To where it's like I'm getting the love from the streets and from the people in the building - and that's kinda dope.

I've seen people who don't have deals get features from people that labels can't even get features from, because you gotta show face and be in-tune with these guys who still have that independent mind set as far how you hustle yourself. Because they only really care at the end of the day about the dollas.

You Yourself
Kid Ink

I would describe my style for those who haven't listened to my music as definitely..up-tempo. I try to have something nice, something people could dance to. It's kind of hard though to describe my sound in one record because I think when I approach music I try to do something different every day. Do a different vibe.

To be comfortable in your skin was the biggest topic for me because I'm somebody who's always judged just by how I look. I wanted to get the message across that you don't have to hide yourself or be glamorous, just be you.

You Me Yourself I
Kid Ink

[DJ Ill Will] already knew I had the music talent prior to meeting him in person, I guess when he met me face to face he saw the potential on a marketing level and believed in the music I could create to back it up so we teamed up and the rest is history.

Me History Music I
Kid Ink

I try to be true to myself yet still at the same time look at comments and look at what the fans have to say and kind of put it in perspective. I'm never someone whose not open for opinion, I'm always just down to make it work and see how we can do things but at the end of the day I always want to make sure it represents me. It's really about just being humble and not selling yourself on being there already.

Me Never Time Yourself I
Kid Ink

I could always hold a melody, but I was never like, I'm going to be a singer. So I'm able to use that when I write. I'm actually playing the beat with my voice. Instead of thinking about coming up with melodies, it's like filling in the instruments. So sometimes it's better to have beats with less melodies in them, because then I can play more with my vocals.

I still let myself be a fan of music and that motivates me to want to be better than certain people or just getting the same love. Nothing is new under the sun so you cant be afraid to take things from others and try to flip them and make them your own at the end of the day.

You Me Love Music Trying I
Kid Ink

I tried to take some of the same records that were important to me on my album Full Speed that my fans really vibed with content-wise and just made sure that the production and actual sound was put together differently and wasn't rushed as much.

Me Together I
Kid Ink

The videos are sometimes the only way for people across the country and different places to see and hear the music. They may not get the same radio stations or they don't get the same TV channels, they don't have the same MTV that plays the same music. People will use to the Internet and that's why YouTube and stuff like that is so important. 100 Inspiring Quotes By Bob Dylan That Will Widen Your Horizon About Life.