Keith Olbermann is a well-known American writer and sports and political commentator. He spent two decades of his initial career in sports journalism. In the 1980s, he was a sports correspondent for CNN and local radio stations and television. He won the âBest Sportscaster Awardâ from the âCalifornia Associated Pressâ thrice. From 1998 to 2000, he served as the anchor and producer for âFox Sports Net.â We have curated some inspiring and insightful quotes and thoughts by Keith Olbermann. Let us browse through the collection of quotes by Keith Olbermann, which have been extracted from his interviews, public utterances, shows, thoughts, works, writings, and life. 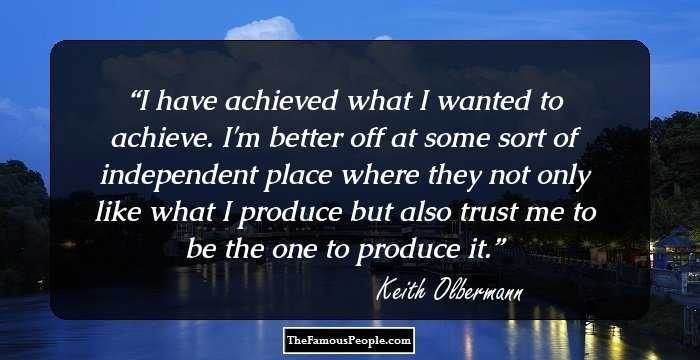 I have achieved what I wanted to achieve. I'm better off at some sort of independent place where they not only like what I produce but also trust me to be the one to produce it. 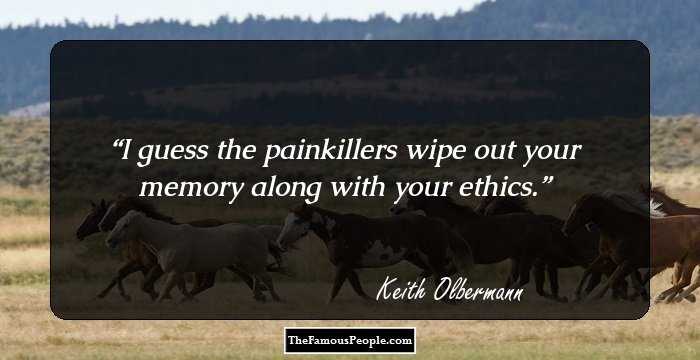 I guess the painkillers wipe out your memory along with your ethics. 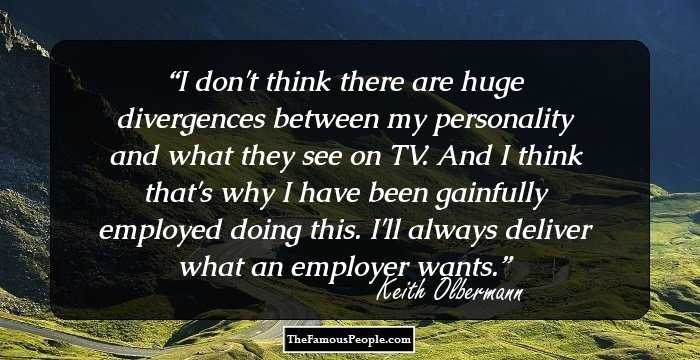 I don't think there are huge divergences between my personality and what they see on TV. And I think that's why I have been gainfully employed doing this. I'll always deliver what an employer wants. 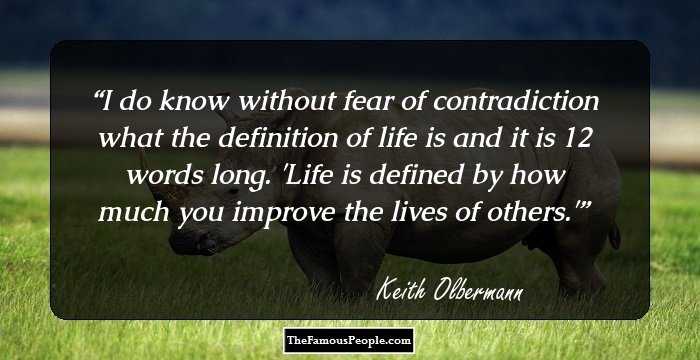 I do know without fear of contradiction what the definition of life is and it is 12 words long. 'Life is defined by how much you improve the lives of others.' 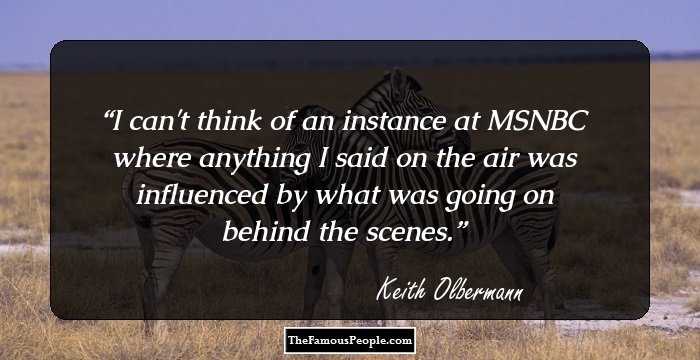 I can't think of an instance at MSNBC where anything I said on the air was influenced by what was going on behind the scenes. 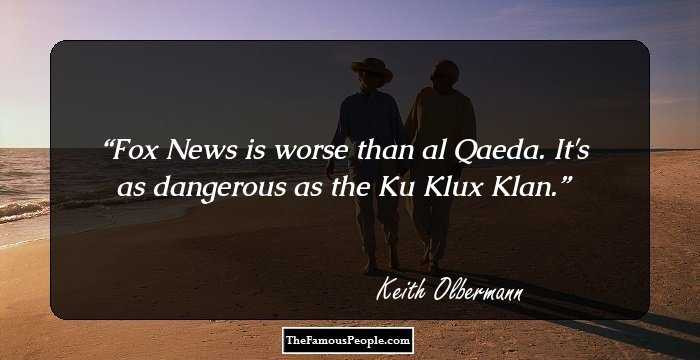 Fox News is worse than al Qaeda. It's as dangerous as the Ku Klux Klan. 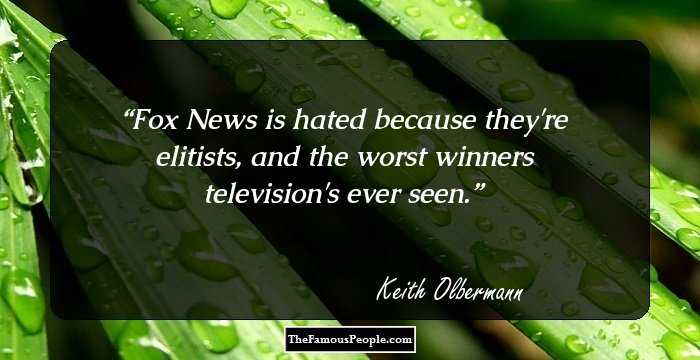 Fox News is hated because they're elitists, and the worst winners television's ever seen. 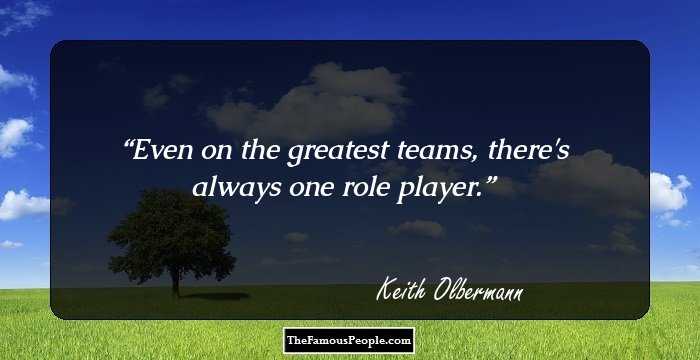 Even on the greatest teams, there's always one role player. 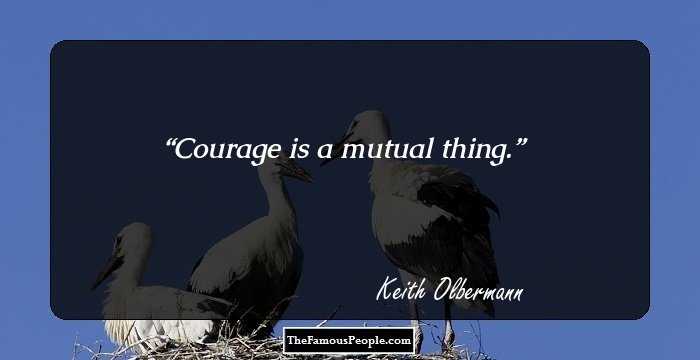 Courage is a mutual thing. 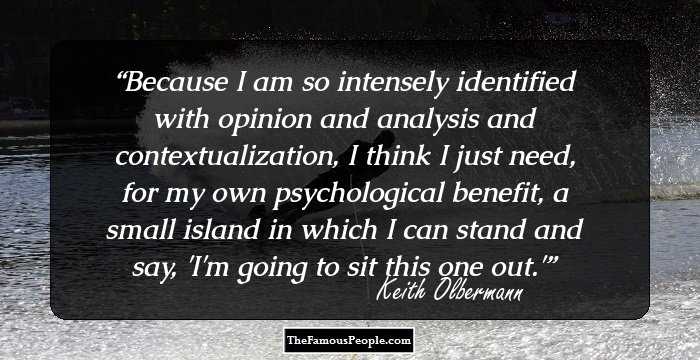 Because I am so intensely identified with opinion and analysis and contextualization, I think I just need, for my own psychological benefit, a small island in which I can stand and say, 'I'm going to sit this one out.' 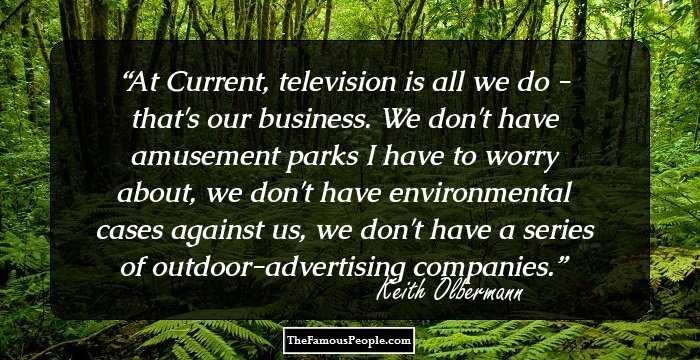 At Current, television is all we do - that's our business. We don't have amusement parks I have to worry about, we don't have environmental cases against us, we don't have a series of outdoor-advertising companies. 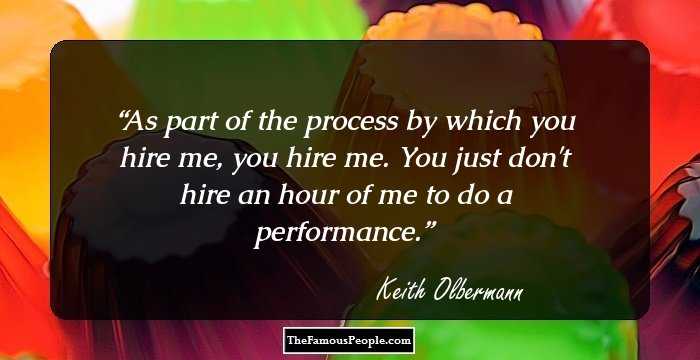 As part of the process by which you hire me, you hire me. You just don't hire an hour of me to do a performance. 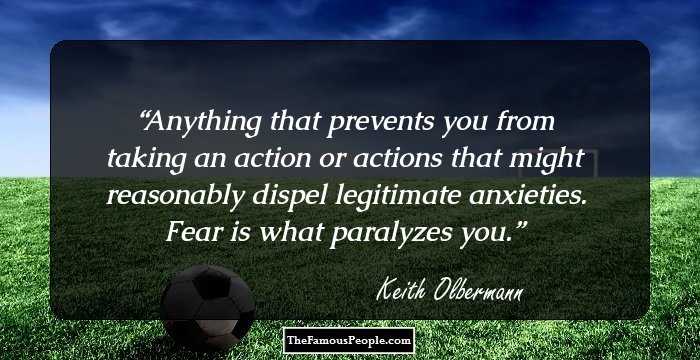 Anything that prevents you from taking an action or actions that might reasonably dispel legitimate anxieties. Fear is what paralyzes you. 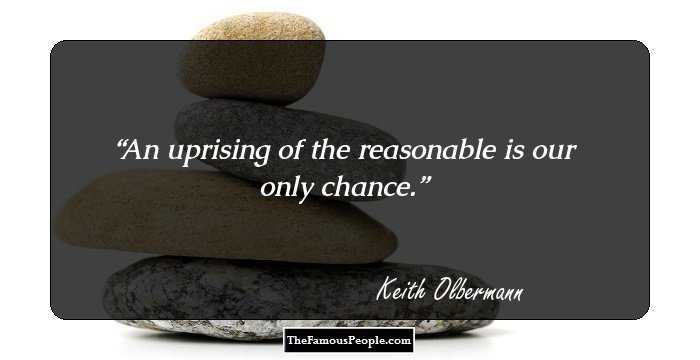 An uprising of the reasonable is our only chance. 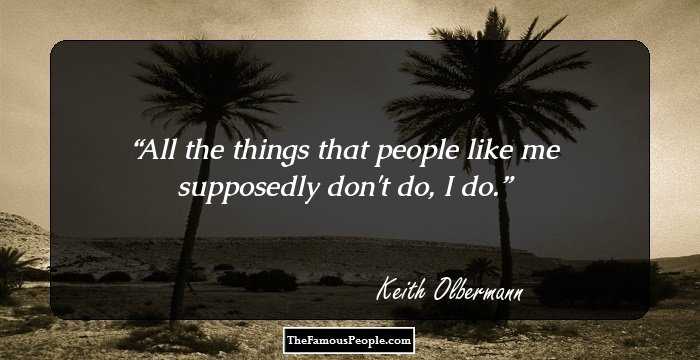 All the things that people like me supposedly don't do, I do. 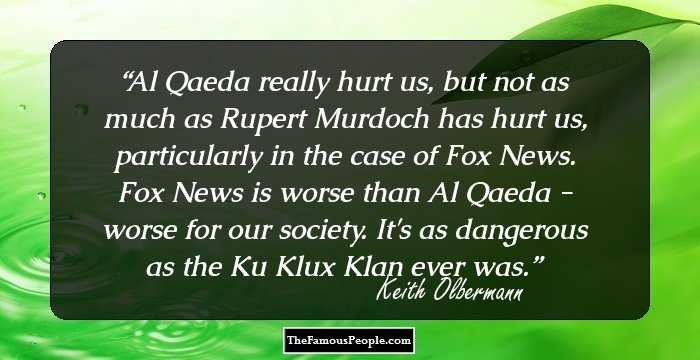 Al Qaeda really hurt us, but not as much as Rupert Murdoch has hurt us, particularly in the case of Fox News. Fox News is worse than Al Qaeda - worse for our society. It's as dangerous as the Ku Klux Klan ever was. 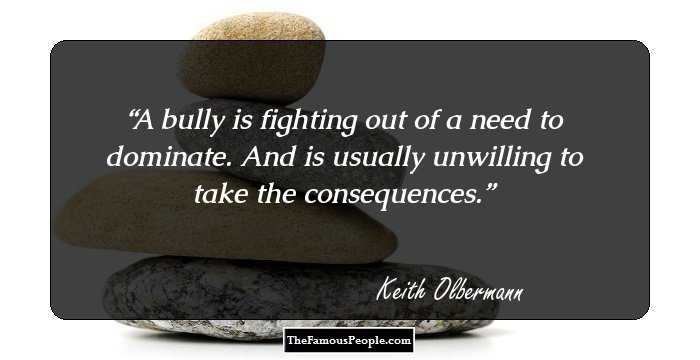 A bully is fighting out of a need to dominate. And is usually unwilling to take the consequences.

A past President, bullied and sandbagged by a monkey posing as a newscaster, finally lashed back....The nation's marketplace of ideas is being poisoned by a propaganda company so blatant that Tokyo Rose would've quit....As with all the other nefariousness and slime of this, our worst presidency since James Buchanan, he [President Bush] is having it done for him, by proxy. Thus, the sandbag effort by Fox News Friday afternoon.

Abraham Lincoln did not shoot John Wilkes Booth. Titanic did not sink a North Atlantic iceberg. And Fox News is neither fair nor balanced. These are simple historical facts intelligible to all adults, most children, and some of your more discerning domesticated animals. But not... to Bill O

And if Sarah Palin whose Web site put and today scrubbed bull's-eyes targets on 20 Representatives, including Gabby Giffords, does not repudiate her own part - however tangential - in amplifying violence and violent imagery in American politics, she must be dismissed from politics. She must be repudiated by the members of her own party. And if they fail to do so, each one of them must be judged to have silently defended this tactic that today proved so awfully foretelling. And they must in turn be dismissed by the responsible members of their own party.

Apparently, the people in the [George W.] Bush administration who wanted to confront me on this could not spell my name correctly. They wanted to send a series of emails thinking that perhaps MSNBC was perhaps favorable to the Bush administration. They thought that they could send me a series of questions or talking points to disprove Joe Wilson with.

As a final crash of self-indulgent nonsense, when the incontrovertible truth of your panoramic and murderous deceit has even begun to cost your political party seemingly perpetual congressional seats....When somebody asks you, sir, about the cooked books and faked threats you foisted on a sincere and frightened nation; when somebody asks you, sir, about your gallant, noble, self-abnegating sacrifice of your golf game so as to soothe the families of the war dead; this advice, Mr. Bush: Shut the hell up! Good night and good luck.

Good evening. A President who lied us into a war and, in so doing, needlessly killed 3,584 of our family and friends and neighbors; a President whose administration initially tried to destroy the first man to nail that lie; a President whose henchmen then ruined the career of the intelligence asset that was his wife when intelligence assets were never more essential to the viability of the Republic; a President like that has tonight freed from the prospect of prison the only man ever to come to trial for one of the component felonies in what may be the greatest crime of this young century.

Health care is, at its core, about improving the odds of life in its struggle against death. Of extending that game which we will all lose, each and every one of us unto eternity, extending it another year or month or second. 98 Margaret Mitchell Quotes That Are Worth Knowing 44 Motivational Quotes By Tom Wolfe, A Wordsmith Whose Words Will Live On Forever