Famous As: Tattoo Artist
Born On: March 8, 1982
Born In: Montemorelos, Mexico
Founder / Co Founder: High Voltage Tattoo
Age: 40 Years
Kat Von D is a renowned American tattoo artist, musician, entrepreneur and model famous for creating complex designs. She was inclined towards art since an early age and dropped out of school at the age of 16 to pursue her dream of being a tattoo artist. During her initial days, she worked for various tattoo studios which helped her land a job at the renowned television series called âMiami Inkâ but had to exit the show due to some rift. Although she failed at her first show but her prolific creativity encouraged her to open her own tattoo studio called âHigh Voltage Tattooâ at Hollywood. She turned the studio into a great success which helped her telecast her own TV series, âLA Inkâ, which showed tattoo stories of various customers. She even published her first tattoo book titled âHigh Voltage Tattooâ which turned out to be a best-seller. She became a well-known artist and inked various celebrities including âGreen Dayâ and âSebastian Bachâ. She has also established a reputation as an entrepreneur as she successfully runs a clothing line and a cosmetics line. She once held a âGuinness World Recordâ for making the most number of tattoos in a period of 24 hours. We present some of her most famous quotations and sayings which have been scanned from her books, writings, work and thoughts. Go through these quotes and thoughts by Kat which reflect her wisdom about life.
Listed In:
Quotes by Famous People
Fashion 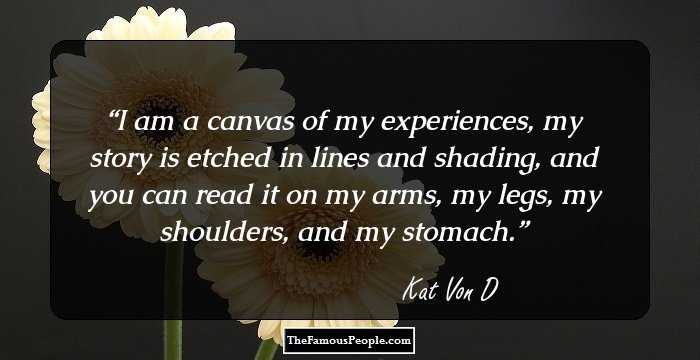 I am a canvas of my experiences, my story is etched in lines and shading, and you can read it on my arms, my legs, my shoulders, and my stomach.

You I
Kat Von D 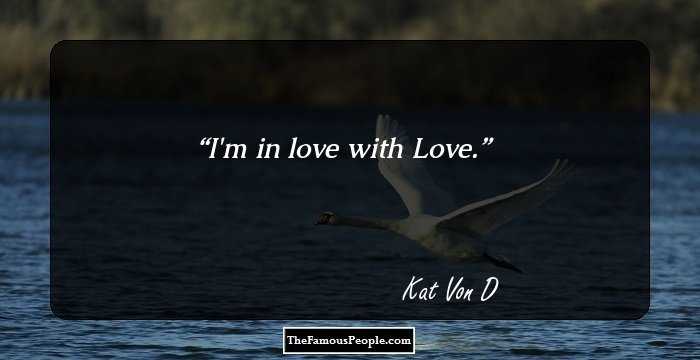 I'm in love with Love. 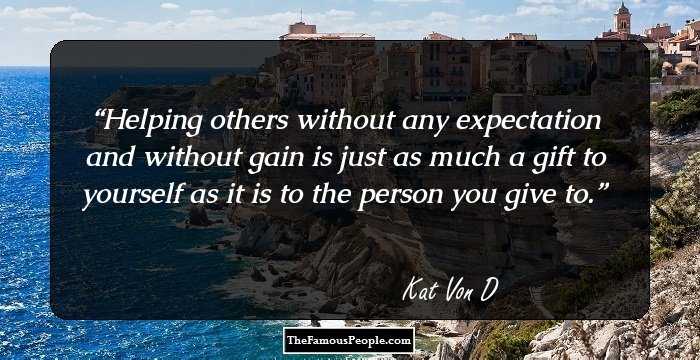 Helping others without any expectation and without gain is just as much a gift to yourself as it is to the person you give to.

You Yourself
Kat Von D 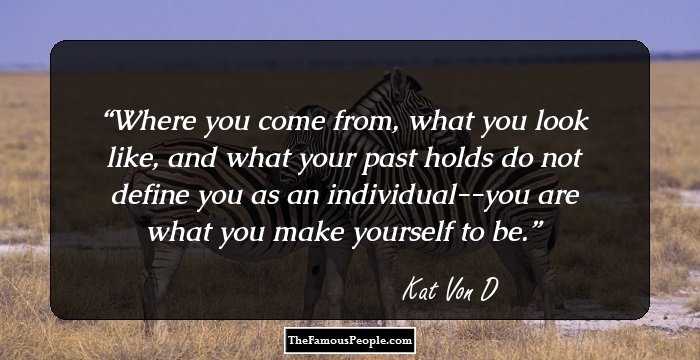 Where you come from, what you look like, and what your past holds do not define you as an individual--you are what you make yourself to be. 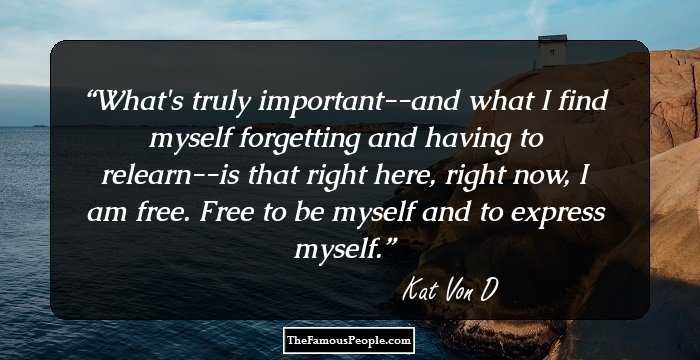 What's truly important--and what I find myself forgetting and having to relearn--is that right here, right now, I am free. Free to be myself and to express myself. 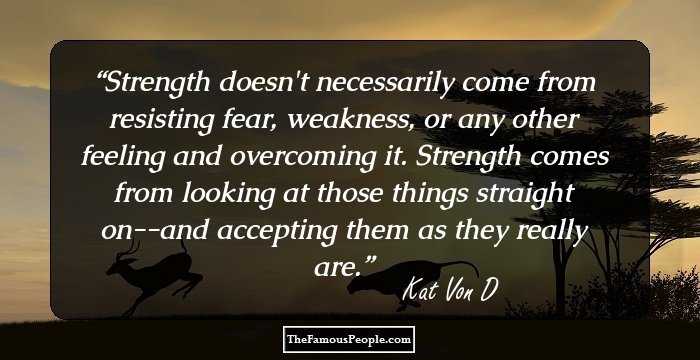 Strength doesn't necessarily come from resisting fear, weakness, or any other feeling and overcoming it. Strength comes from looking at those things straight on--and accepting them as they really are. 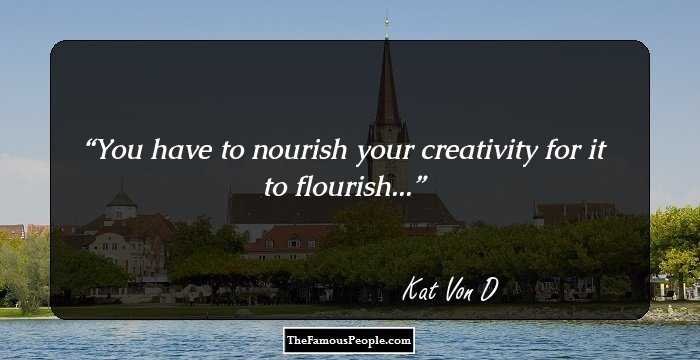 You have to nourish your creativity for it to flourish... 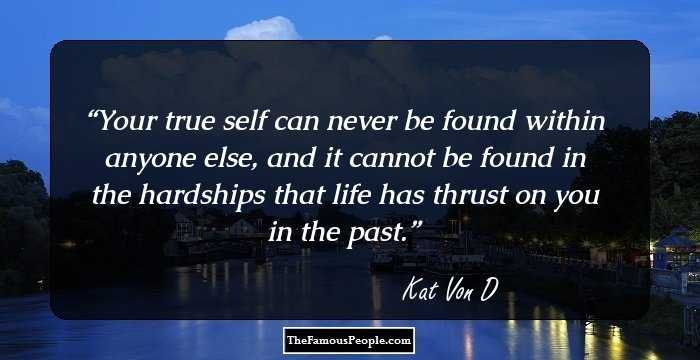 Your true self can never be found within anyone else, and it cannot be found in the hardships that life has thrust on you in the past. 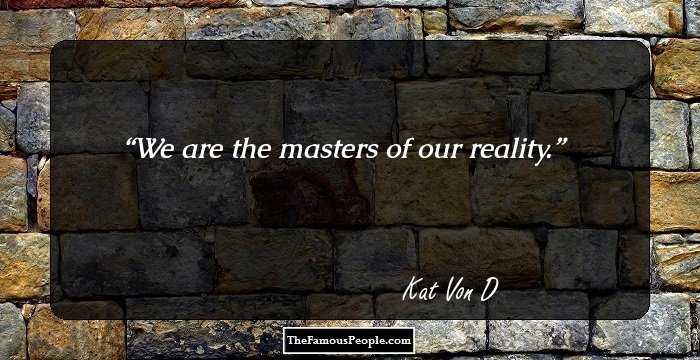 We are the masters of our reality. 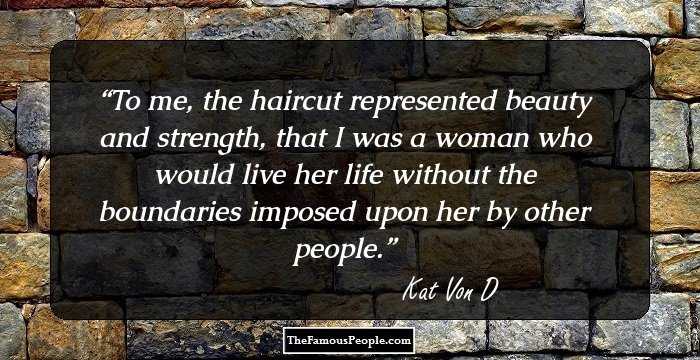 To me, the haircut represented beauty and strength, that I was a woman who would live her life without the boundaries imposed upon her by other people.

Life Me I
Kat Von D 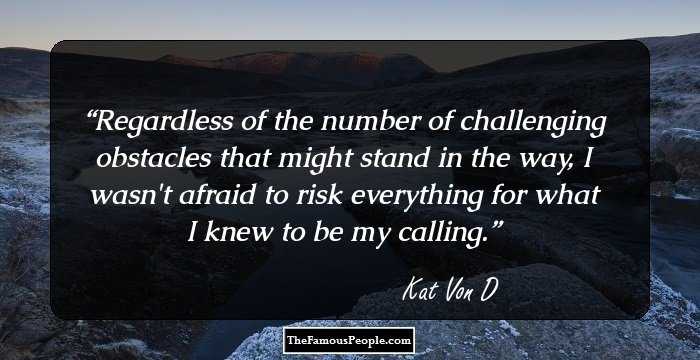 Regardless of the number of challenging obstacles that might stand in the way, I wasn't afraid to risk everything for what I knew to be my calling.