Famous As: Actress
Born On: June 21, 1921
Died On: June 7, 1965
Born In: New York City, New York, U.S.
Died At Age: 43
Judy Holliday was an American actress, singer, and comedian. She is best remembered for her âBroadwayâ as well as film performance as âBillie Dawnâ in âBorn Yesterdayâ in 1946 and 1950, respectively. She won an âAcademy Awardâ and a âGolden Globe Award for Best Actressâ for her performance in the film version. Judy started her entertainment career as a part of a nightclub act in 1938. She made her acting debut as an extra in the 1938 film âToo Much Johnson.â She had her first significant role in the 1944 film âWinged Victory.â Her performance as âDoris Attingerâ in the 1949 film âAdam's Ribâ won her a âGolden Globeâ nomination for Best Supporting Actress.â With time, she starred in many successful films, such as âPhffftâ (1954), âThe Solid Gold Cadillacâ (1956), and âBells Are Ringingâ (1960). Her 1957 film âFull of Lifeâ remains to be her least successful film. Check out some of Judy Hollidayâs quotes on friendship, New York, hard work, thinking, way, audience, smart, etc.
Listed In:
Film & Theater Personalities
Actresses 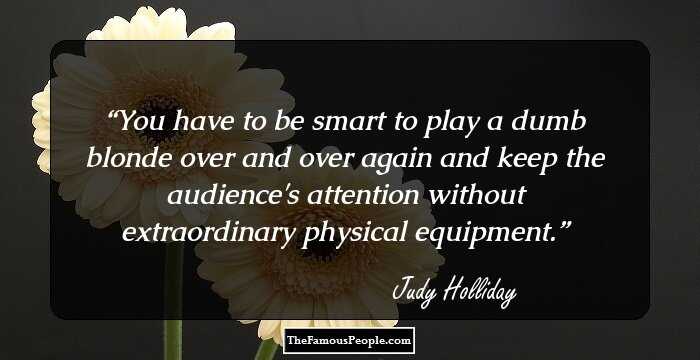 You have to be smart to play a dumb blonde over and over again and keep the audience's attention without extraordinary physical equipment. 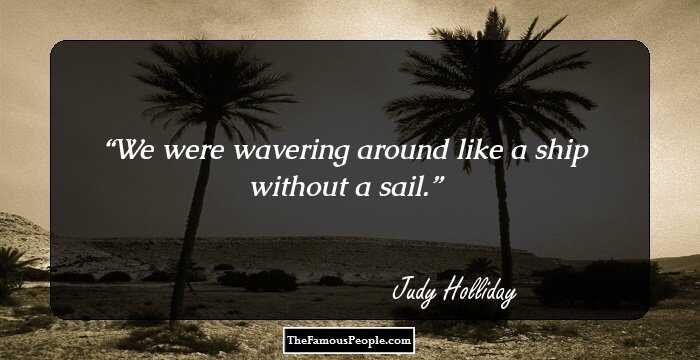 We were wavering around like a ship without a sail. 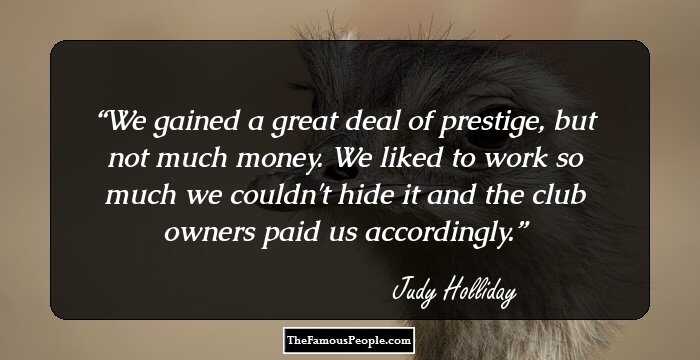 We gained a great deal of prestige, but not much money. We liked to work so much we couldn't hide it and the club owners paid us accordingly. 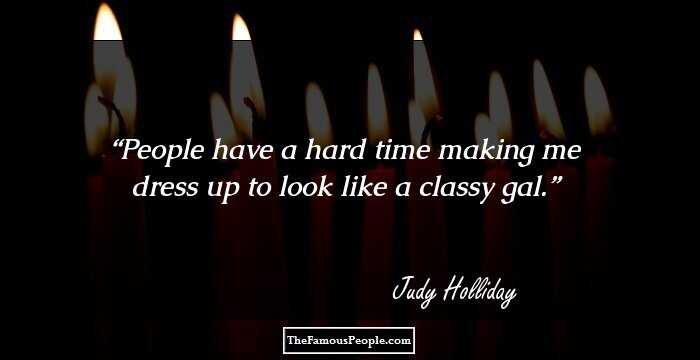 People have a hard time making me dress up to look like a classy gal. 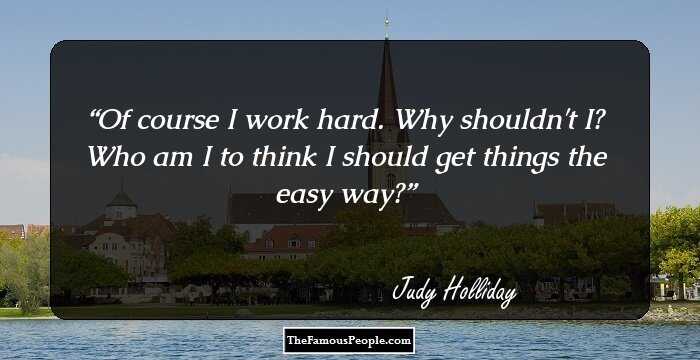 Of course I work hard. Why shouldn't I? Who am I to think I should get things the easy way? 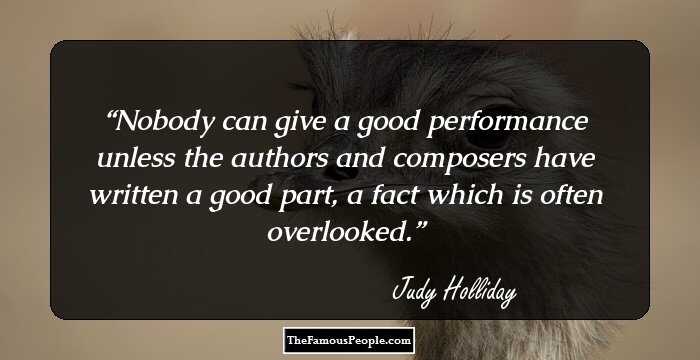 Nobody can give a good performance unless the authors and composers have written a good part, a fact which is often overlooked. 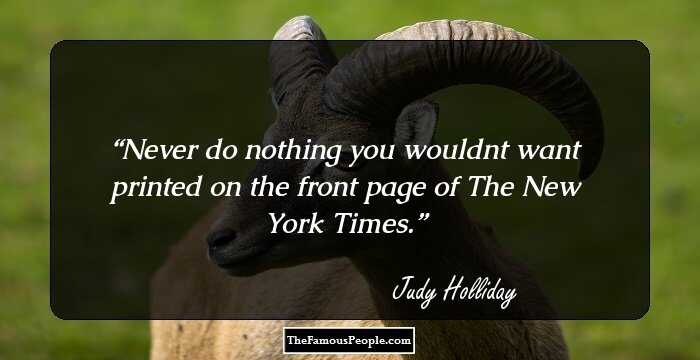 Never do nothing you wouldnt want printed on the front page of The New York Times. 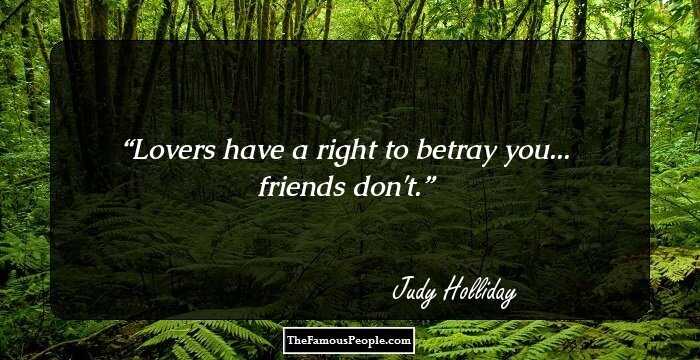 Lovers have a right to betray you... friends don't. 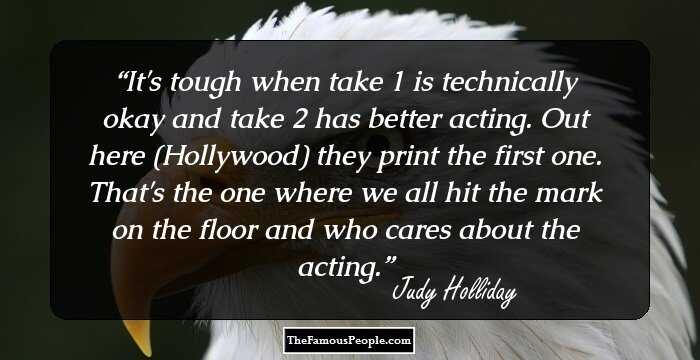 It's tough when take 1 is technically okay and take 2 has better acting. Out here (Hollywood) they print the first one. That's the one where we all hit the mark on the floor and who cares about the acting. 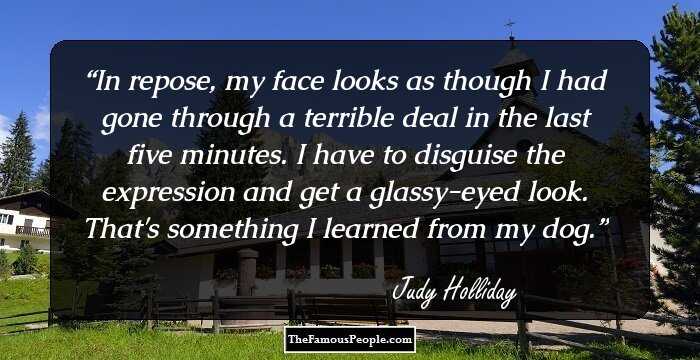 In repose, my face looks as though I had gone through a terrible deal in the last five minutes. I have to disguise the expression and get a glassy-eyed look. That's something I learned from my dog. 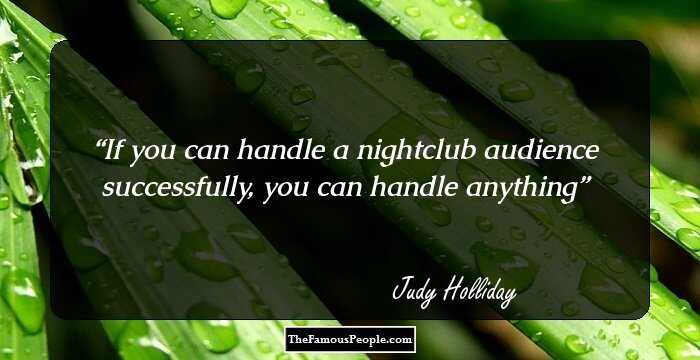 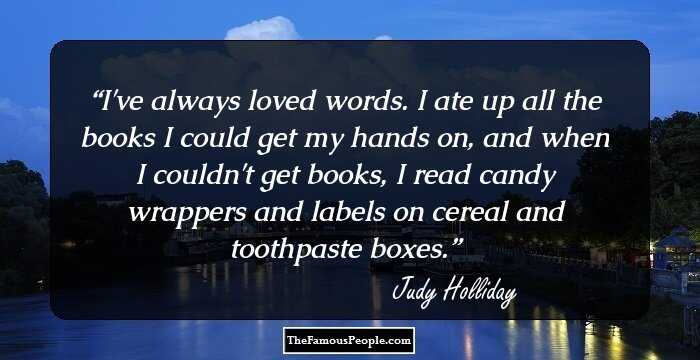 I've always loved words. I ate up all the books I could get my hands on, and when I couldn't get books, I read candy wrappers and labels on cereal and toothpaste boxes. 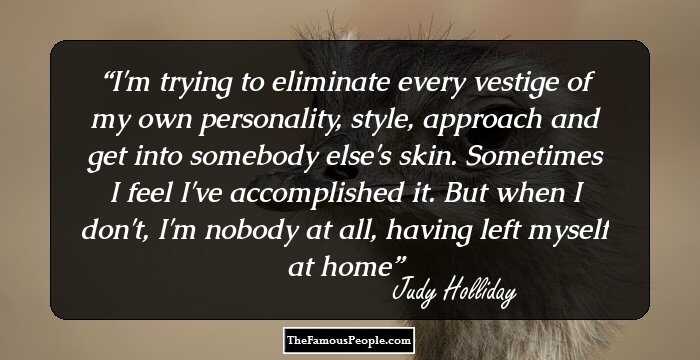 I'm trying to eliminate every vestige of my own personality, style, approach and get into somebody else's skin. Sometimes I feel I've accomplished it. But when I don't, I'm nobody at all, having left myself at home 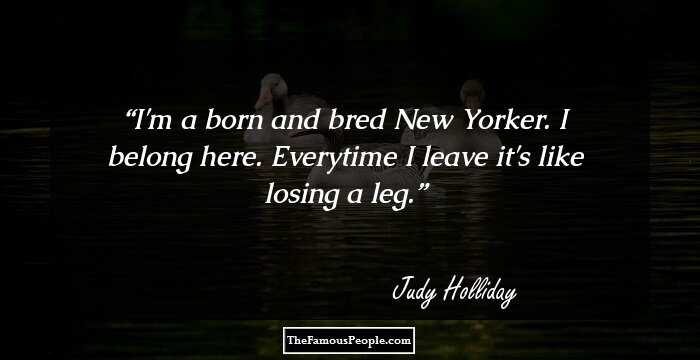 I'm a born and bred New Yorker. I belong here. Everytime I leave it's like losing a leg. 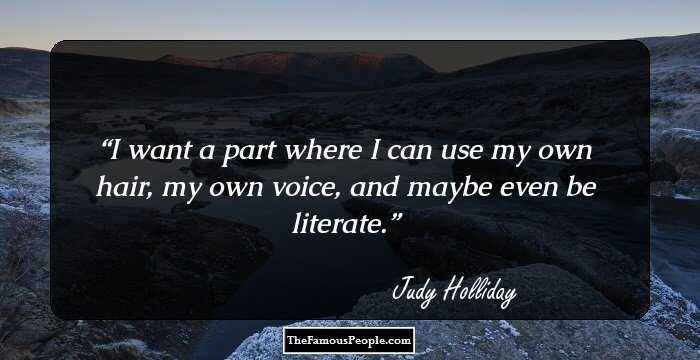 I want a part where I can use my own hair, my own voice, and maybe even be literate. 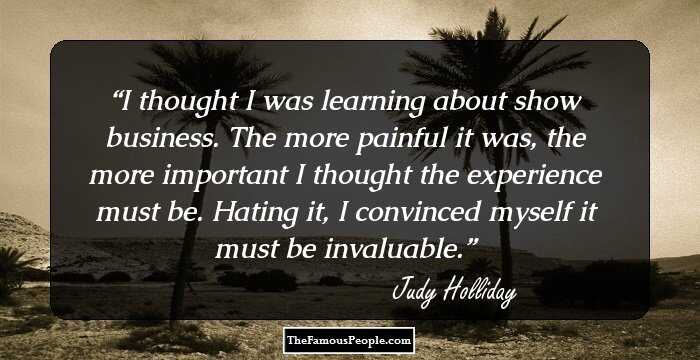 I thought I was learning about show business. The more painful it was, the more important I thought the experience must be. Hating it, I convinced myself it must be invaluable. 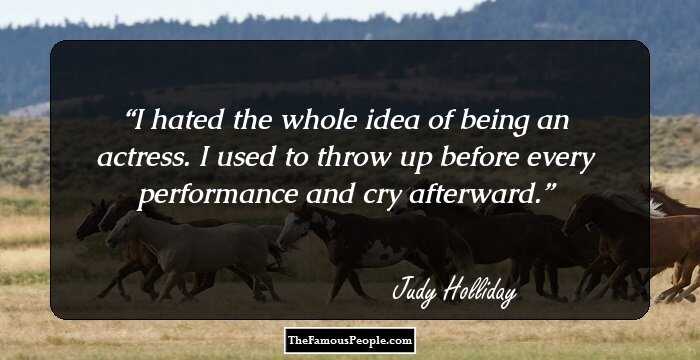 I hated the whole idea of being an actress. I used to throw up before every performance and cry afterward. 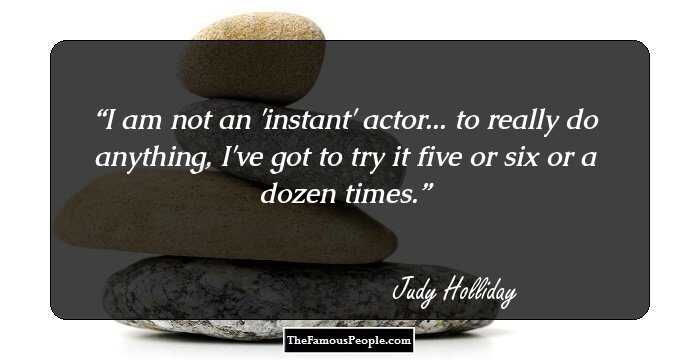 I am not an 'instant' actor... to really do anything, I've got to try it five or six or a dozen times. 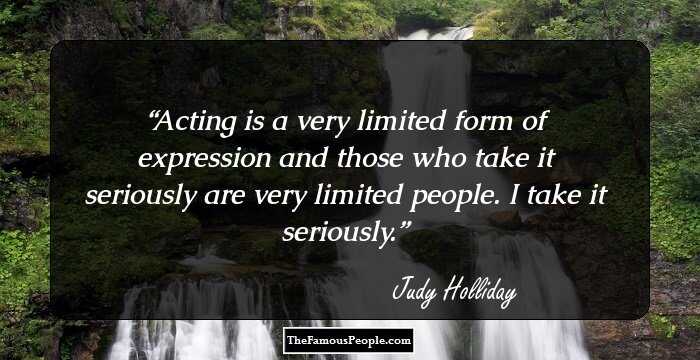 I am not a member of any organization listed by the Attorney General as subversive. In any instance where I lent my name in the past, it was certainly without knowledge that such an organization was subversive. I have always been essentially and foremost an American.

I get very nervous whenever I think about it. I've never done a serious play, and I have such awe of the woman - she's really my only idol. It's going to be a big stretch - certain people come out on stage and your face muscles automatically tense and you get ready to smile.

I suppose that if I could have quit, I would have, because in those days I never wanted to be an actress, the acting was something to do while I waited for a chance to study writing and directing. But I guess I was just meant to be an actress. Because, here I am.

I was bargaining for time away from Hollywood, and Columbia was bargaining for money. I got what I wanted and they got what they wanted. They knew I was so anxious to do Born Yesterday that I'd have done it for a dollar. They gave me the next best thing.