Famous As: Economist, Journalist
Born On: September 13, 1938
Age: 84 Years
Judith Martin, popularly known by her pseudonym Miss Manners, is an American author, journalist and etiquette authority, famous for scripting the âMiss Mannersâ series of novels. These etiquette tips and advices were published in form of newspaper columns, short-stories and essays. Her tips were vastly popular due to itheir simplicity which provided behavioral guidelines in laymanâs language. Some of the noted collections of her work include âMiss Manners' Guide to Excruciatingly Correct Behaviorâ, âMiss Manners on Weddingsâ and âMiss Manners: A Citizen's Guide to Civilityâ. Apart from the âMiss Mannersâ series, her other important works include âStyle and Substanceâ, âNo Vulgar Hotel: The Desire and Pursuit of Veniceâ and âGilbertâ. In 2005, Martins received the âNational Humanities Medalâ from President George W. Bush. Martin is also an active contributor for âwowOwowâ, which is a famous website for women where they can chit chat, gossip and talk about politics and culture. Here are some of most popular quotes from this living legend who gave us the âHeavy etiquette theoryâ, highlighting her thoughts on issues pertaining to responsibility, formality, rules, politeness and grace. Take a look at the most notable quotations and sayings by Judith Martin.
Listed In:
Intellectuals & Academics
Media Personalities 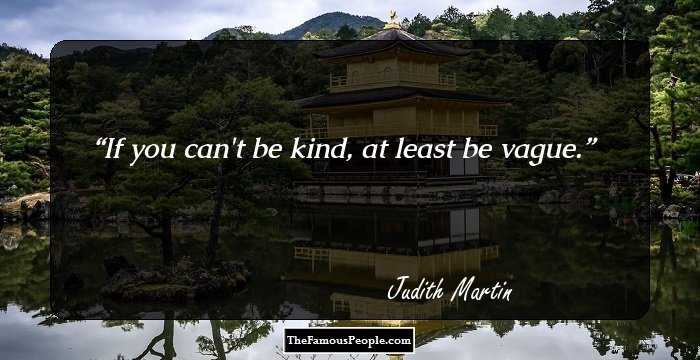 If you can't be kind, at least be vague. 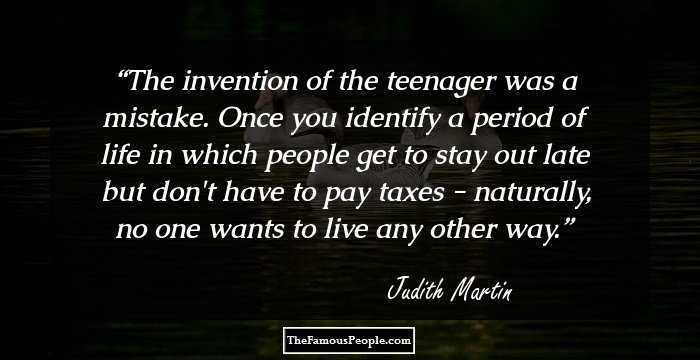 The invention of the teenager was a mistake. Once you identify a period of life in which people get to stay out late but don't have to pay taxes - naturally, no one wants to live any other way. 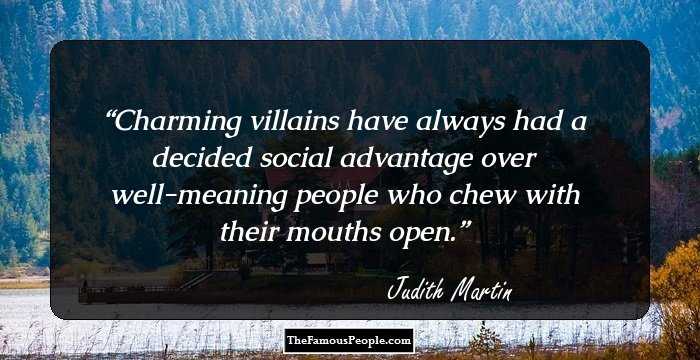 Charming villains have always had a decided social advantage over well-meaning people who chew with their mouths open. 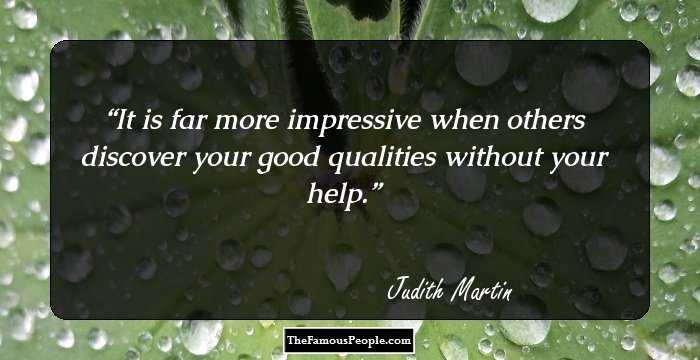 It is far more impressive when others discover your good qualities without your help. 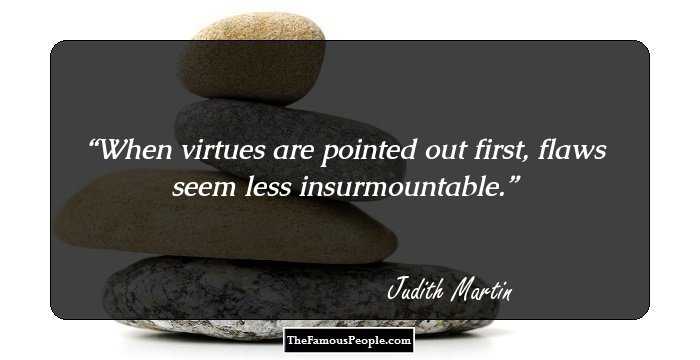 When virtues are pointed out first, flaws seem less insurmountable. 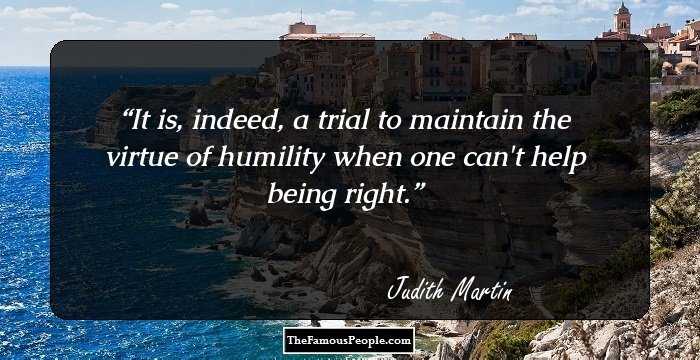 It is, indeed, a trial to maintain the virtue of humility when one can't help being right. 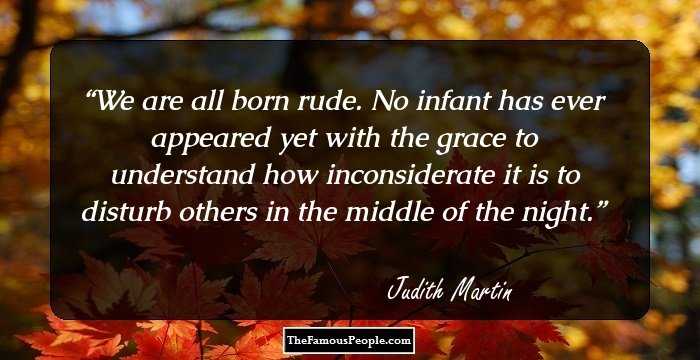 We are all born rude. No infant has ever appeared yet with the grace to understand how inconsiderate it is to disturb others in the middle of the night. 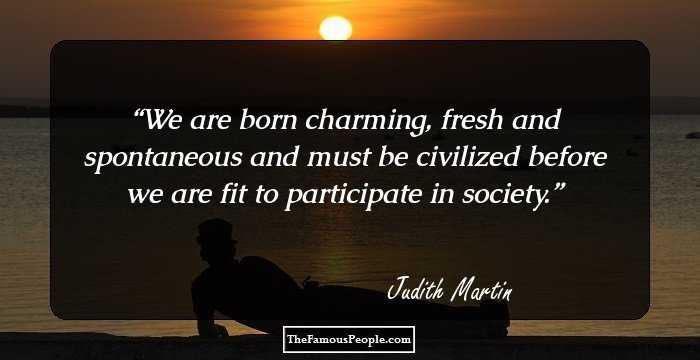 We are born charming, fresh and spontaneous and must be civilized before we are fit to participate in society. 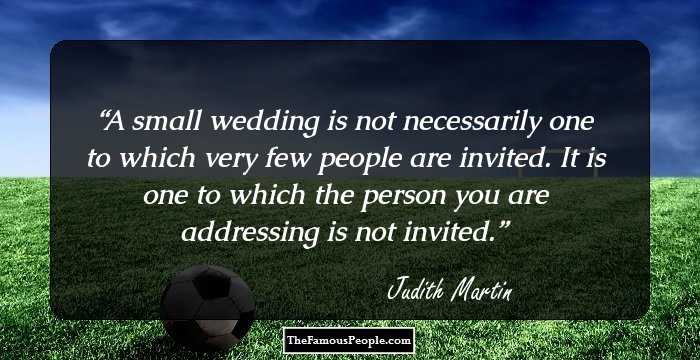 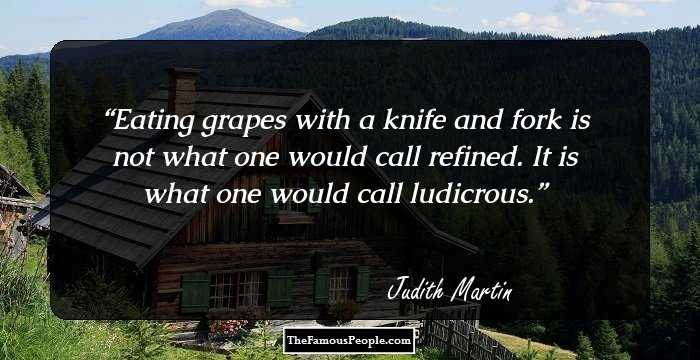 35 Notable Quotes By B. F. Skinner, The Most Influential Psychologist Of The 20th Century