Famous As: Known for an Often Humorous Style of Original Music That Has Elements of Protest and Social Commentary
Born On: October 10, 1946
Died On: April 7, 2020
Born In: Maywood, Illinois, United States
Founder / Co Founder: Oh Boy Records
Died At Age: 73

John Prine was a distinguished American country folk songwriter and singer. From the early 1970s till the time of his death he was active as a live performer, composer, and a recording artist. He was renowned for his humorous style of music that gave a glimpse of social commentary and protest. He was awarded the âGrammy Lifestyle Achievement Awardâ in 2020. He was also renowned for his entertaining lyrics about life, current events, love, melancholy tales from his life and social commentary. Take a look at the compilation of popular quotes by John Prine, which have been extracted from his songs, compositions, interviews, and lyrics. Go through the corpus of sayings by John Prine on music, serious, mistakes, people, philosophy, songwriting, wife, artist, work, joy, and more. 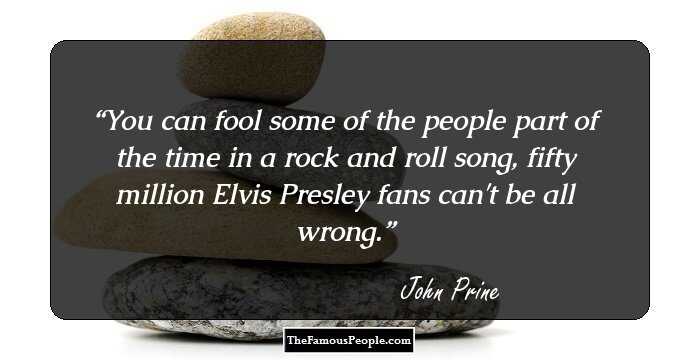 You can fool some of the people part of the time in a rock and roll song, fifty million Elvis Presley fans can't be all wrong. 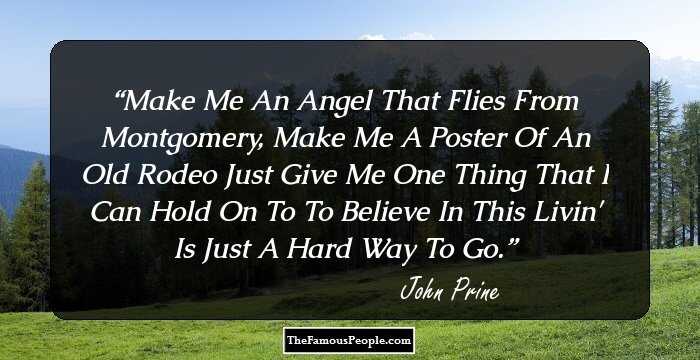 MAKE ME AN ANGEL THAT FLIES FROM MONTGOMERY, MAKE ME A POSTER OF AN OLD RODEO JUST GIVE ME ONE THING THAT I CAN HOLD ON TO TO BELIEVE IN THIS LIVIN' IS JUST A HARD WAY TO GO. 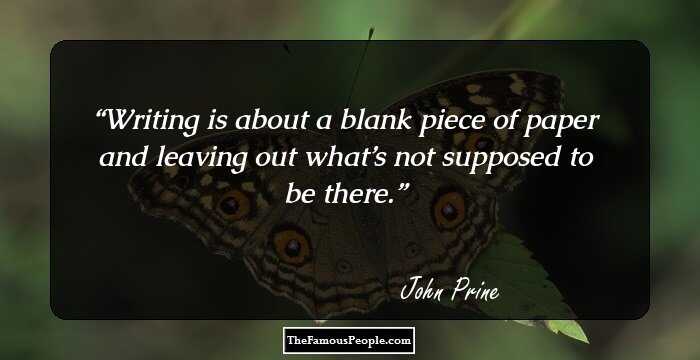 Writing is about a blank piece of paper and leaving out whatâs not supposed to be there. 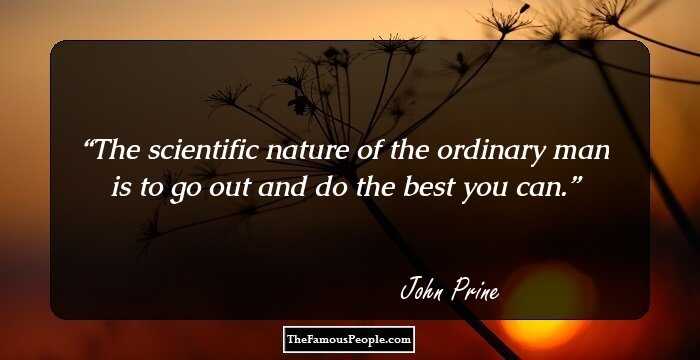 The scientific nature of the ordinary man is to go out and do the best you can. 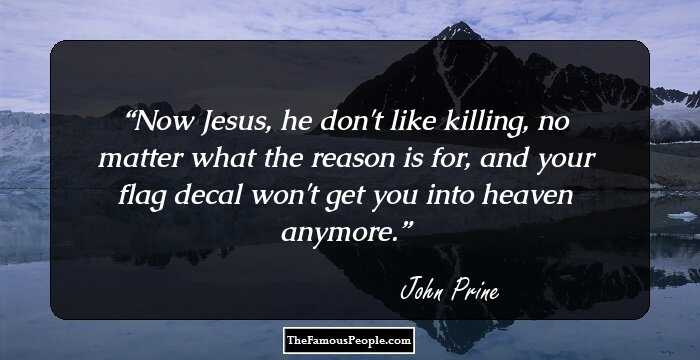 Now Jesus, he don't like killing, no matter what the reason is for, and your flag decal won't get you into heaven anymore. 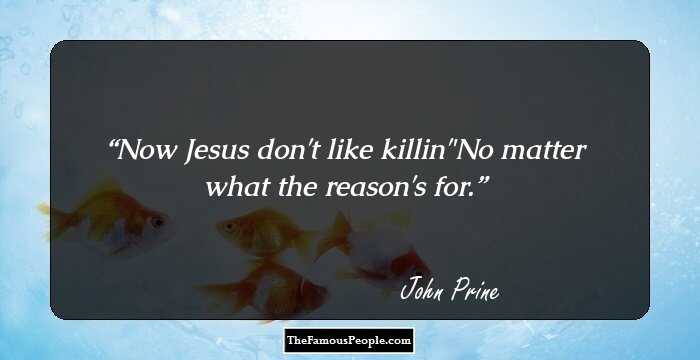 Now Jesus don't like killin'/No matter what the reason's for. 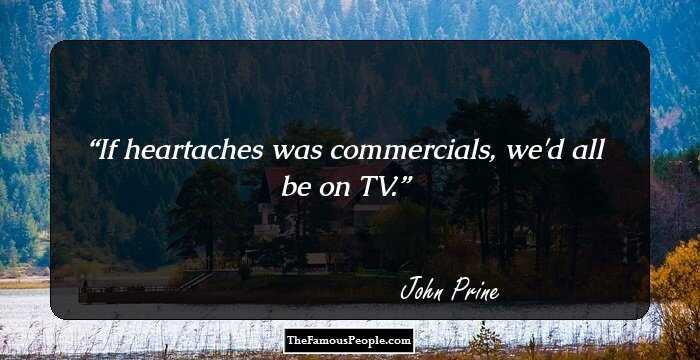 If heartaches was commercials, we'd all be on TV. 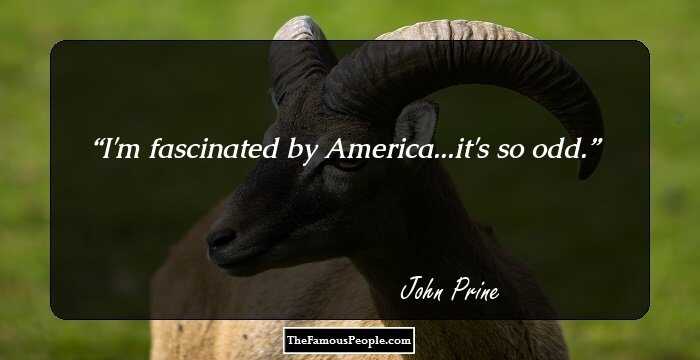 I'm fascinated by America...it's so odd. 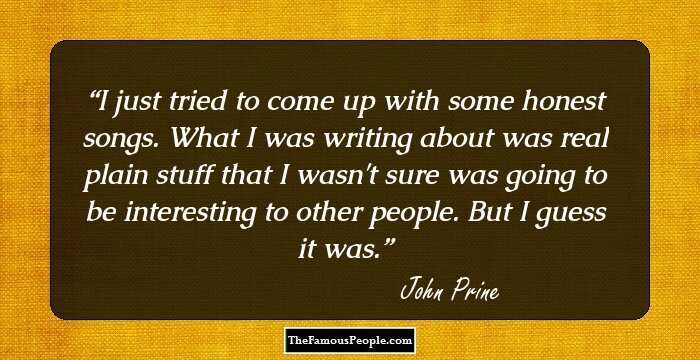 I just tried to come up with some honest songs. What I was writing about was real plain stuff that I wasn't sure was going to be interesting to other people. But I guess it was. 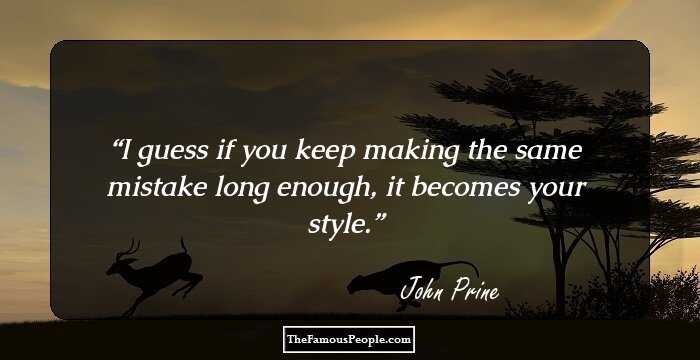 I guess if you keep making the same mistake long enough, it becomes your style. 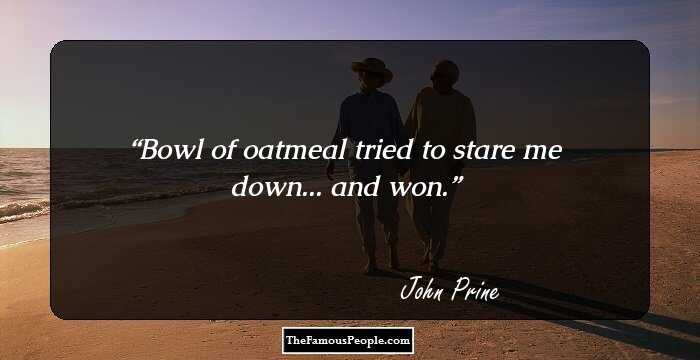 Bowl of oatmeal tried to stare me down... and won. 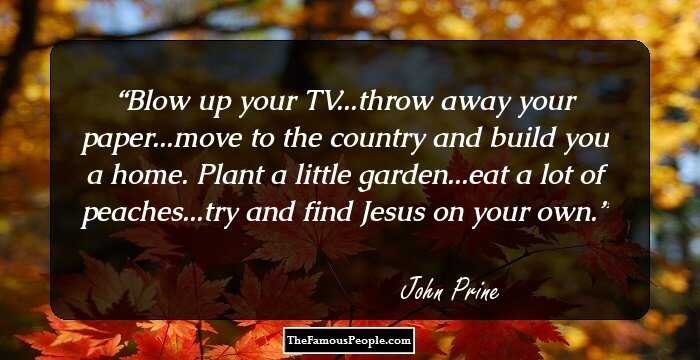 Blow up your TV...throw away your paper...move to the country and build you a home. Plant a little garden...eat a lot of peaches...try and find Jesus on your own. 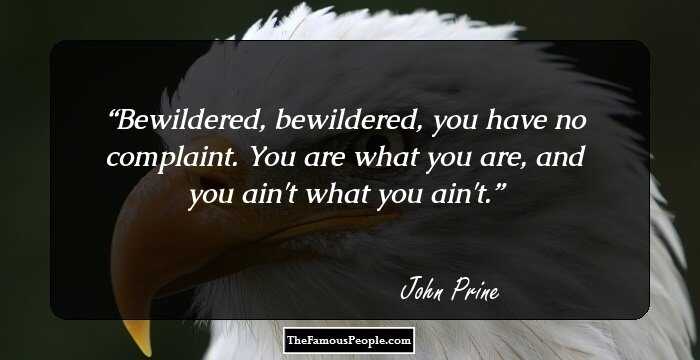 I guess what I always found funny was the human condition. There is a certain comedy and pathos to trouble and accidents. Like, when a driver has parked his car crookedly and then wonders why he has the bad luck of being hit.

I just tried to come up with some honest songs. What I was writing about was real plain stuff that I wasn't sure was going to be interesting to other people. But I guess it was...I've never had any discipline whatsoever. I just wait on a song like I was waiting for lightning to strike. And eventually-usually sometime around 3 in the morning-I'll have a good idea. By the time the sun comes up, hopefully, I'll have a decent song.

I think the more the listener can contribute to the song, the better; the more they become part of the song, and they fill in the blanks. Rather than tell them everything, you save your details for things that exist. Like what color the ashtray is. How far away the doorway was. So when you're talking about intangible things like emotions, the listener can fill in the blanks and you just draw the foundation.

Some of the songs come so fully, it's like they are pre-packaged. There have been a couple that came in the middle of the night. And I thought, jeez, I'll never forget that. And went back to sleep, and it was gone. You'll hear something years later that another songwriter that you respect writes, and you go, jeez, I think that was the remnants of that song that got sent to me.

The best way to write a song is to think of something else and then the song kind of creeps in. The beginning makes no sense whatsoever. It just, like, rhymes. And then all of a sudden I'll go into, I am an old woman named after my mother.