Famous As: Former Chief Justice
Born On: September 24, 1755
Died On: July 6, 1835
Born In: Germantown
Died At Age: 79
John Marshall was a distinguished American politician, who served as the fourth Chief Justice of the country. The United States constitutional law was laid on the basis of his court opinions. He is also said to be one of the brains behind the growth of the Supreme Court of the United States as an important institution along with executive and legislative. He also served in the United States House of Representatives and was the leader of the âFederalist Partyâ in Virginia. He had been a dominant figure in the justice system for more than three decades and is accredited with playing an important role in shaping and developing the countryâs legal system. Here is a collection of some notable and interesting quotes and sayings by John Marshall, which have been corralled from his verdicts, thoughts, opinions, works, writings, etc. Let us browse through the corpus of notable quotes and thoughts by John Marshall on communication, powerful, revolution, constitution, independence, trust, judges, nature, rights, destroy, legislative, government, liberty, equal, humanity and more.
Listed In:
Lawyers & Judges 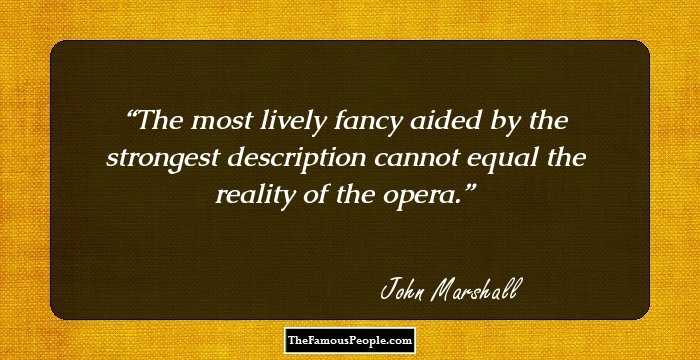 The most lively fancy aided by the strongest description cannot equal the reality of the opera. 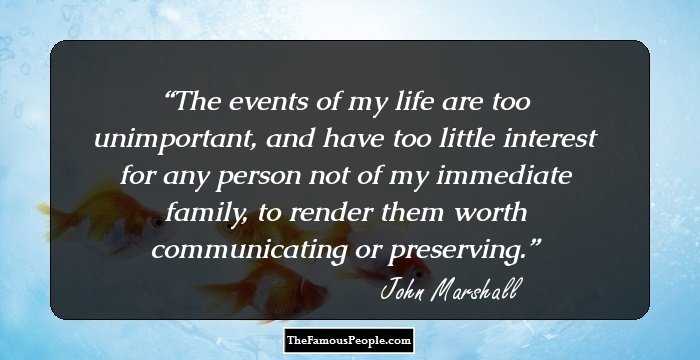 The events of my life are too unimportant, and have too little interest for any person not of my immediate family, to render them worth communicating or preserving. 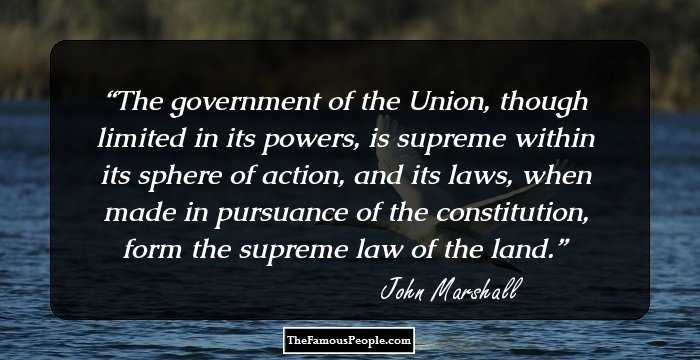 The government of the Union, though limited in its powers, is supreme within its sphere of action, and its laws, when made in pursuance of the constitution, form the supreme law of the land. 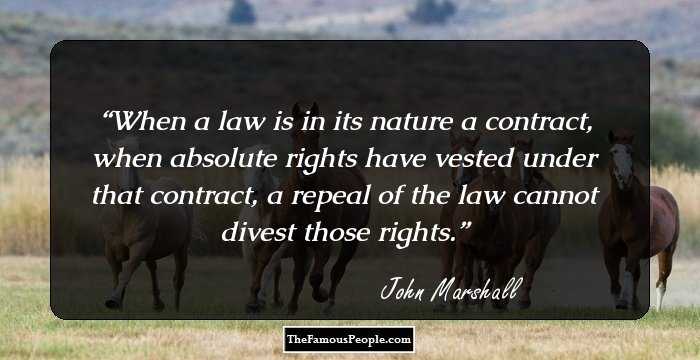 When a law is in its nature a contract, when absolute rights have vested under that contract, a repeal of the law cannot divest those rights. 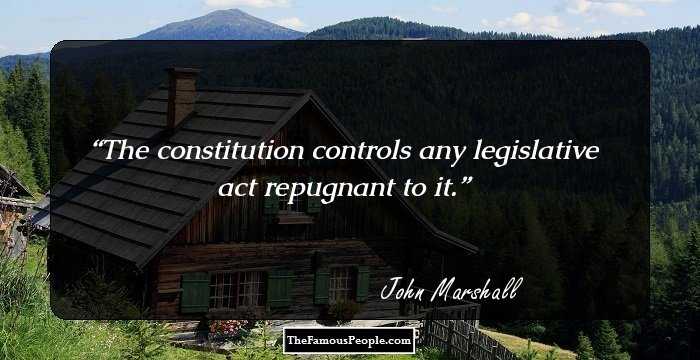 The constitution controls any legislative act repugnant to it. 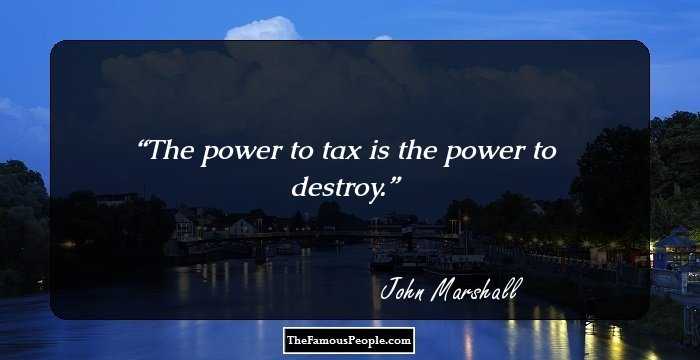 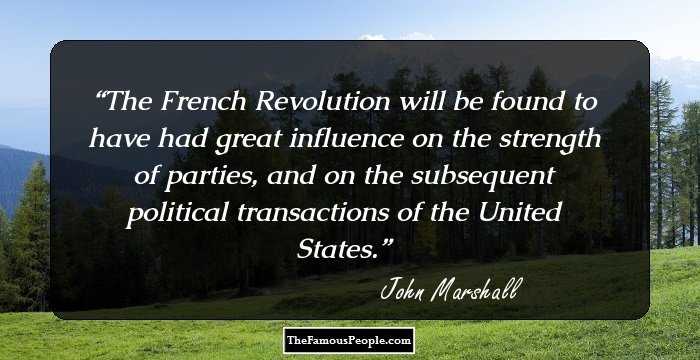 The French Revolution will be found to have had great influence on the strength of parties, and on the subsequent political transactions of the United States. 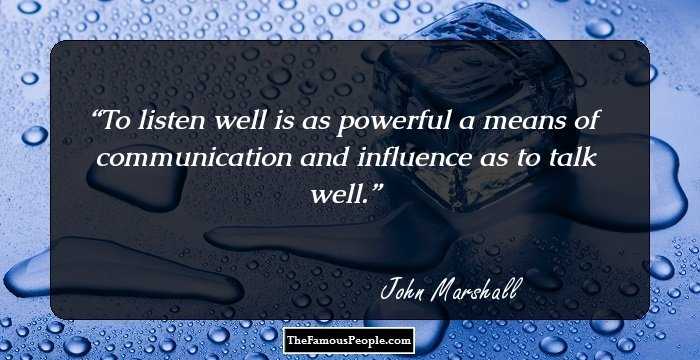 To listen well is as powerful a means of communication and influence as to talk well. 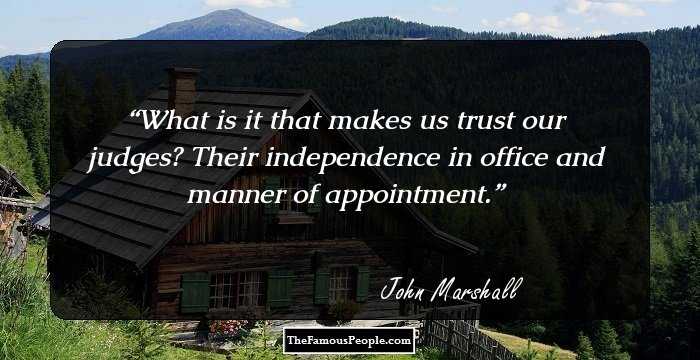 What is it that makes us trust our judges? Their independence in office and manner of appointment.

The constitution is either a superior paramount law, unchangeable by ordinary means, or it is on a level with ordinary legislative acts, alterable when the legislature shall please to alter it. It is emphatically the province and duty of the judicial department to say what the law is. This is the very essence of judicial duty.

When a law is in its nature a contract, when absolute rights have vested under that contract, a repeal of the law cannot divest those rights. The people can act only by their agents and, within the powers conferred upon them, their acts must be considered as the acts of the people.

The very essence of civil liberty certainly consists in the right of every individual to claim the protection of the laws, whenever he receives an injury. One of the first duties of government is to afford that protection.

I have always believed that national character... depends more on the female part of society than is generally imagined. Precepts from the lips of a beloved mother... sink deep in the heart, and make an impression which is seldom entirely effaced.

Paris presents one incessant round of amusement & dissipation but very little, I believe - even for its inhabitants of that society - which interests the heart. Every day, you may see something new, magnificent & beautiful; every night, you may see a spectacle which astonishes & enchants the imagination.

If the agency of the mother in forming the character of her children is, in truth, so considerable, as I think it - if she does so much toward making her son what she would wish him to be - how essential is it that she should be fitted for the beneficial performance of these important duties.

My father superintended the English part of my education, and to his care I am indebted for anything valuable which I may have acquired in my youth. He was my only intelligent companion, and was both a watchful parent and an affectionate friend.

I was born on the 24th of September 1755 in the county of Fauquier, at that time one of the frontier counties of Virginia. My father possessed scarcely any fortune and had received a very limited education - but was a man to whom nature had been bountiful, and who had assiduously improved her gifts.

During intervals of humanity, some disposition has been manifested to permit the return of those who have never offended, who have been banished by a terror which the government itself has reprobated, & to permit in case of arrestation, an investigation of the fact of emigration as well as of the identity of the person accus'd.