Famous As: Writer known for book Homecoming reached No. 1. During the 1980s and 1990s
Born On: June 29, 1933
Died On: May 8, 2016
Born In: Houston, Texas, United States
Died At Age: 82
John Elliot Bradshaw was a distinguished American author, educator, motivation speaker and counselor. Bradshaw was instrumental in bringing up tabooed topics such as addiction, recovery, codependency and its remedies with the assistance of spirituality. He was a propagator of the self-help movement and is accredited with publicizing concepts such as âdysfunctional familyâ and âwounded inner childâ. These concepts were brought to light through his books namely âBradshaw on the Family: A Revolutionary Way of Self Discoveryâ and âHomecoming: Reclaiming and Championing Your Inner Child and Family Secretsâ. Out of 6 books published by Bradshaw, 3 of them went on to become âNew York Timesâ best-sellers, which sold over 10 million copies and were published in 42 languages. He was nominated into the list of âThe 100 Most Influential Writers On Emotional Healthâ in the 20th Century. Apart from hosting numerous shows on the PBS network, Bradshaw made several appearances on popular shows such as Geraldo, Oprah, Dr. Ruth, Sally, Tom Snyder, Donahue, and many more. Here is a collection of some of the most enlightening quotes from this legendary educator, highlighting his thoughts and writings on issues pertaining to alcoholism, drug abuse, emotional and physical well being and spirituality. Read on the compilation of quotations and thoughts by John Bradshaw, the man who was often also referred as a theologian.
Listed In:
Writers
Quotes by Famous People 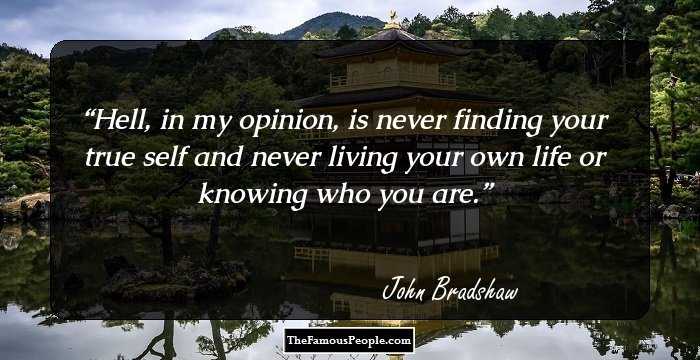 Hell, in my opinion, is never finding your true self and never living your own life or knowing who you are. 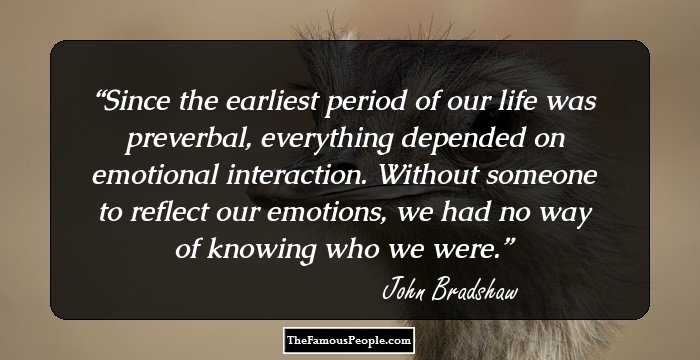 Since the earliest period of our life was preverbal, everything depended on emotional interaction. Without someone to reflect our emotions, we had no way of knowing who we were. 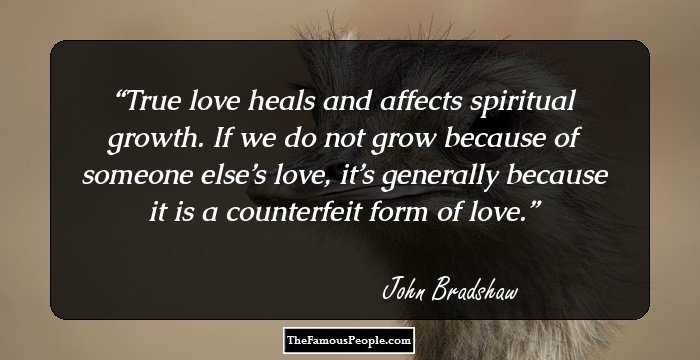 True love heals and affects spiritual growth. If we do not grow because of someone elseâs love, itâs generally because it is a counterfeit form of love. 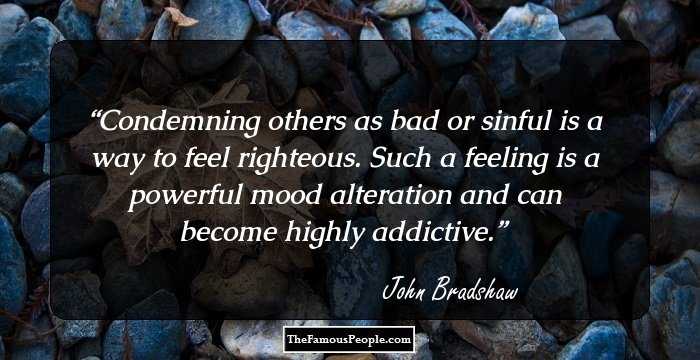 Condemning others as bad or sinful is a way to feel righteous. Such a feeling is a powerful mood alteration and can become highly addictive. 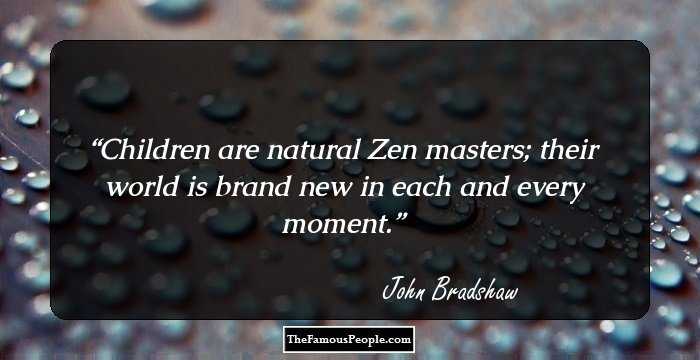 Children are natural Zen masters; their world is brand new in each and every moment. 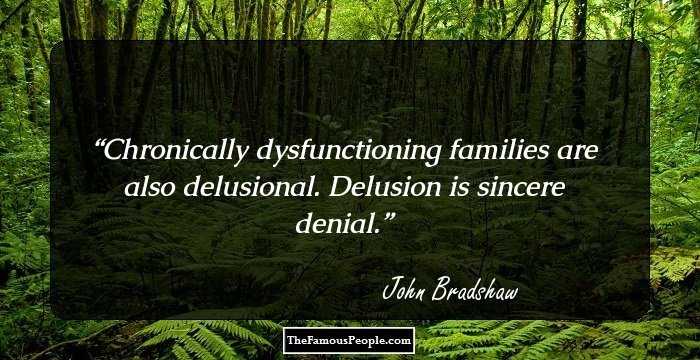 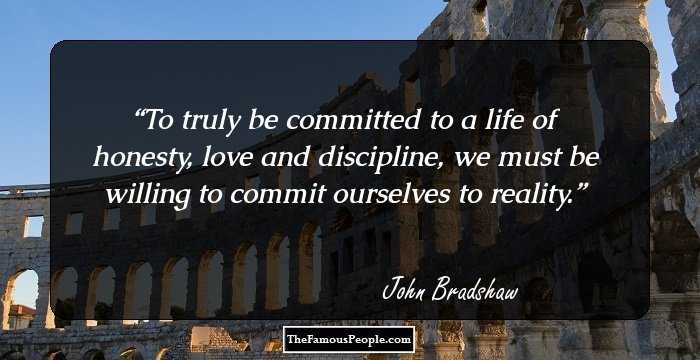 To truly be committed to a life of honesty, love and discipline, we must be willing to commit ourselves to reality. 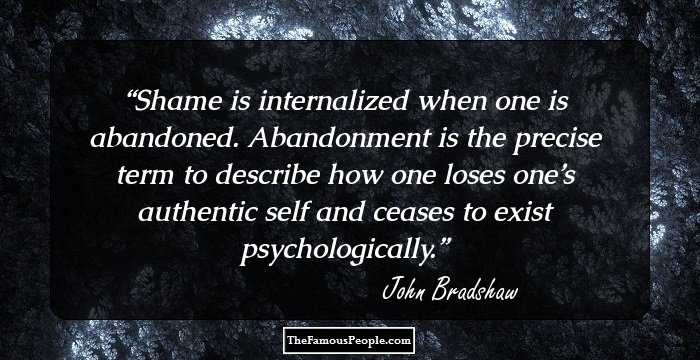 Shame is internalized when one is abandoned. Abandonment is the precise term to describe how one loses oneâs authentic self and ceases to exist psychologically. 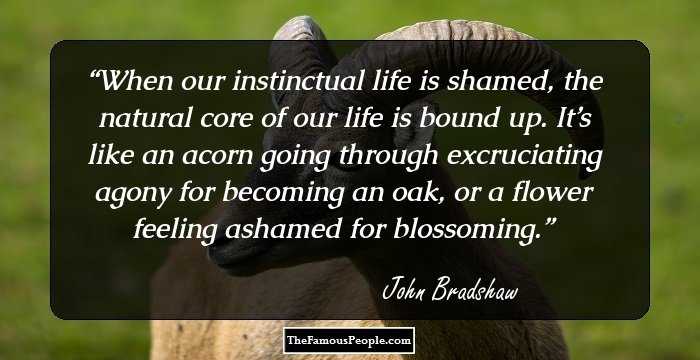 When our instinctual life is shamed, the natural core of our life is bound up. Itâs like an acorn going through excruciating agony for becoming an oak, or a flower feeling ashamed for blossoming. 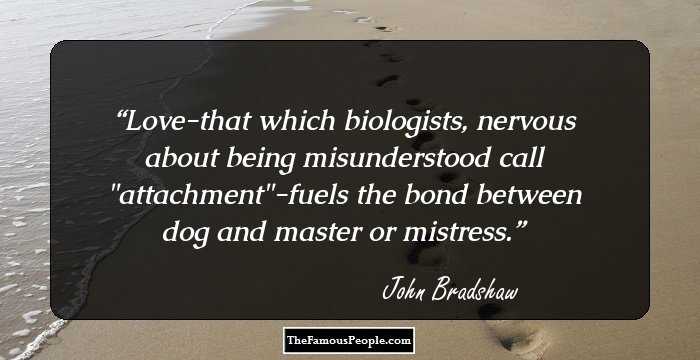 Love-that which biologists, nervous about being misunderstood call "attachment"-fuels the bond between dog and master or mistress. 98 Mario Puzo Quotes That Will Impress You Thoroughly 27 Top Ann Coulter Quotes That Show How Her Mind Thinks