Famous As: American Former Professional Football Wide Receiver
Born On: October 13, 1962
Born In: Starkville, Mississippi, United States
Age: 60 Years
Jerry Rice is a distinguished former American football wide receiver. He played a total of twenty seasons in the National Football League. He is accredited with reviving the face of football with his playing style and outstanding talent. He became the greatest wide receiver in the history of NFL. Renowned by the name âThe G.O.A.Tâ, he is an all-time NFL leader in yards, receptions and touchdown reception. He has also authored two books âGo Long: My Journey Beyond the Name and Fameâ and âRiceâ. He has also starred in a number of commercials and television shows. We have curated some popular sayings and quotes by the celebrated sportsman from his works, thoughts, books, writings, interviews, public utterances and life. Read through the compilation of quotes and thoughts by Jerry Rice both on-field and off-field.
Listed In:
Sportspersons 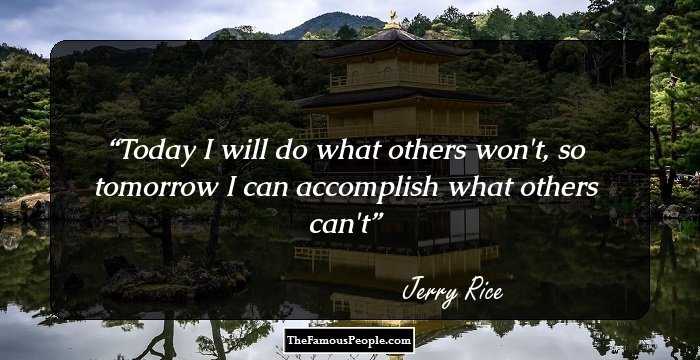 Will I
Jerry Rice

I think the thing about that was I was always willing to work; I was not the fastest or biggest player but I was determined to be the best football player I could be on the football field and I think I was able to accomplish that through hard work. 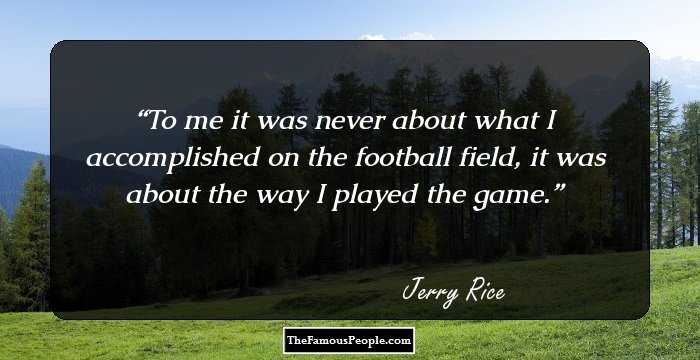 To me it was never about what I accomplished on the football field, it was about the way I played the game. 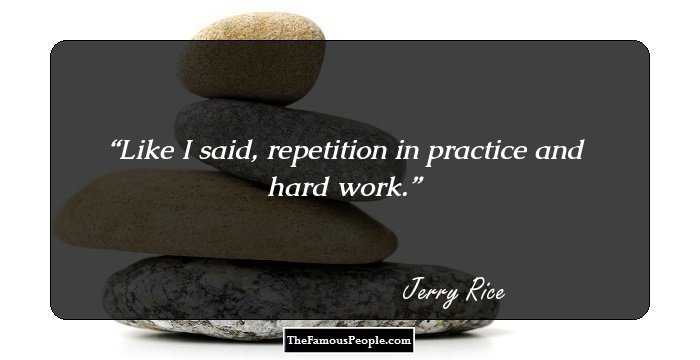 Like I said, repetition in practice and hard work. 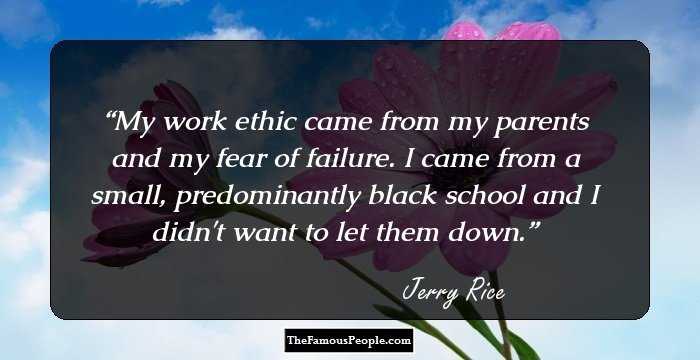 My work ethic came from my parents and my fear of failure. I came from a small, predominantly black school and I didn't want to let them down.

You know, I never looked down the road and said, 'Hey look, one day, the Hall of Fame.' It's always about playing each and every game 100 percent and I thank my teammates for getting me into the Hall because football is a team sport, not an individual sport.

Montana and I had a chemistry that was unbelievable. When I first came into the league he told me I added five years to his career, and I just think we complimented each other very well and were able to do some amazing things out on the football field.

If I should get selected into the Hall of Fame, I'd be able to say 'thank you' to all the legends that are in the Hall of Fame. And also say thank you to my teammates, and also to all the fans. It's going to be like a dream come true. 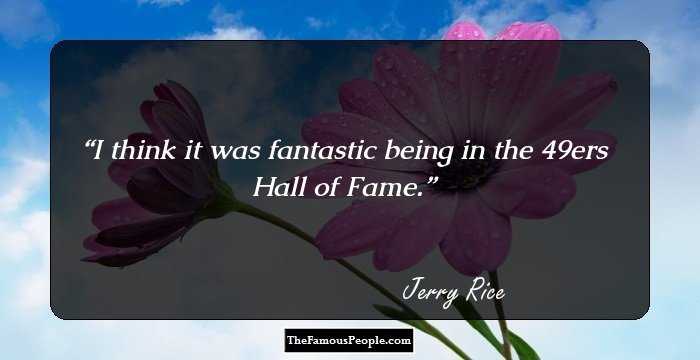 I think it was fantastic being in the 49ers Hall of Fame. 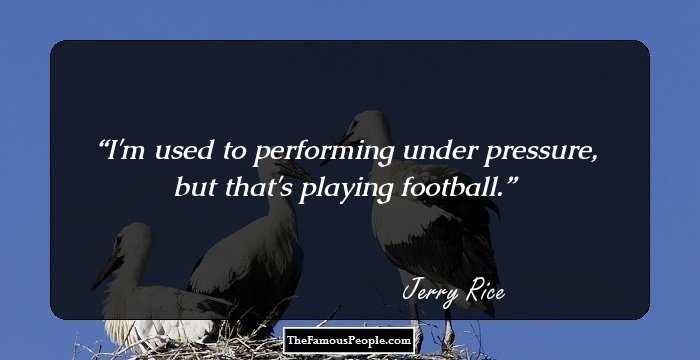 I'm used to performing under pressure, but that's playing football. 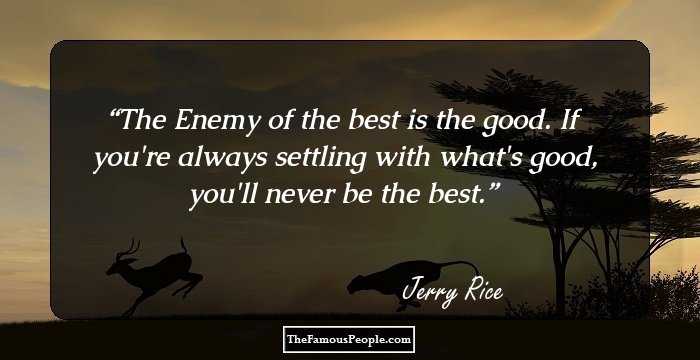 The Enemy of the best is the good. If you're always settling with what's good, you'll never be the best. 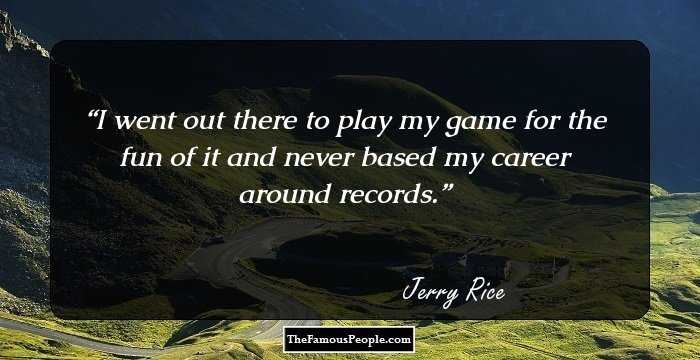 I went out there to play my game for the fun of it and never based my career around records. 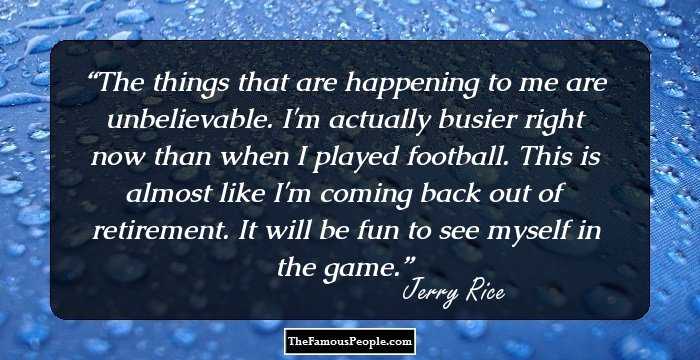 The things that are happening to me are unbelievable. I'm actually busier right now than when I played football. This is almost like I'm coming back out of retirement. It will be fun to see myself in the game. 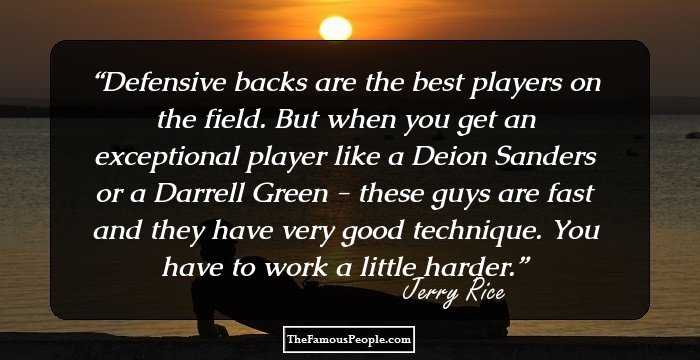 Defensive backs are the best players on the field. But when you get an exceptional player like a Deion Sanders or a Darrell Green - these guys are fast and they have very good technique. You have to work a little harder. 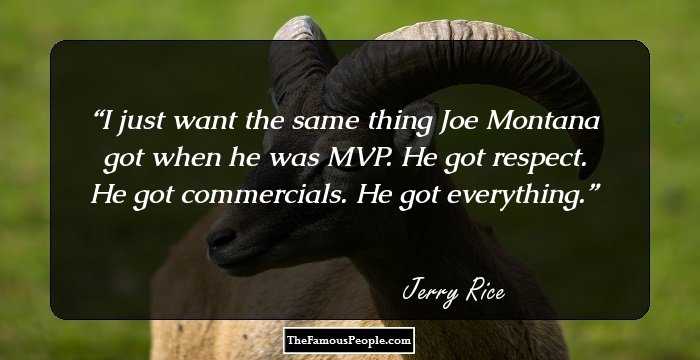 I just want the same thing Joe Montana got when he was MVP. He got respect. He got commercials. He got everything. 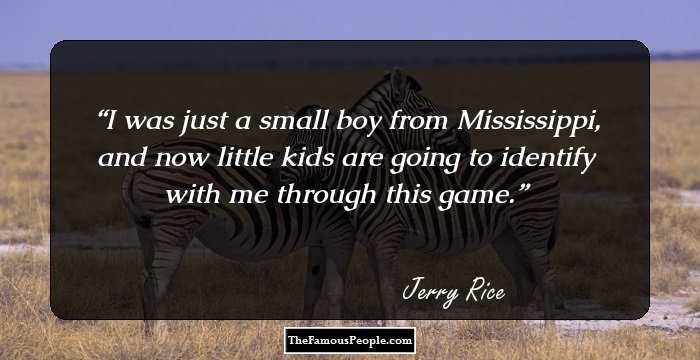 I was just a small boy from Mississippi, and now little kids are going to identify with me through this game. 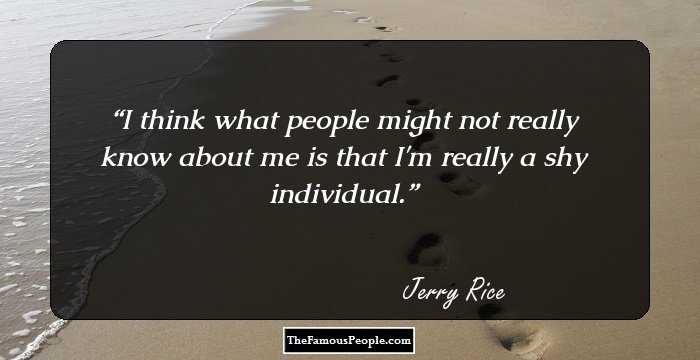 I think what people might not really know about me is that I'm really a shy individual.

I think I just went into a system that was willing to utilize me and gave me opportunities and I felt fortunate to be able to go to Oakland and put the silver and black on. I wanted to prove to everybody that I could still play.

I've grown over the years and I know how to adapt to situations, where I can go into a situation where there's a crowd of people and just take over. But pretty much I'm off to myself. And I'm totally committed to the game of football. That's why I've had so much success.

My agent said, 'Jerry, Dancing With the Stars - they want you on there.' I said, 'Ain't no way. I'm not going to do that.' Then he came back to me again, and he kept putting pressure on me. I said, 'All right, I'll give it a try.' 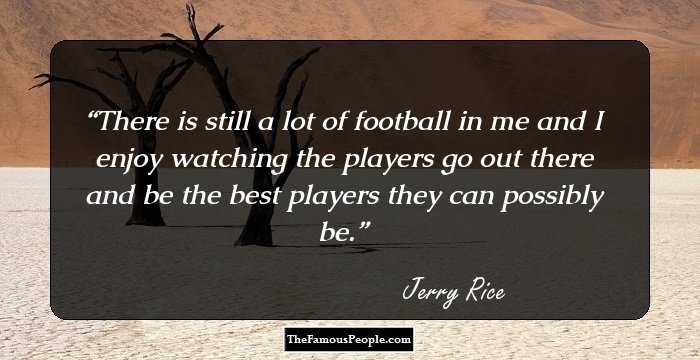 There is still a lot of football in me and I enjoy watching the players go out there and be the best players they can possibly be. 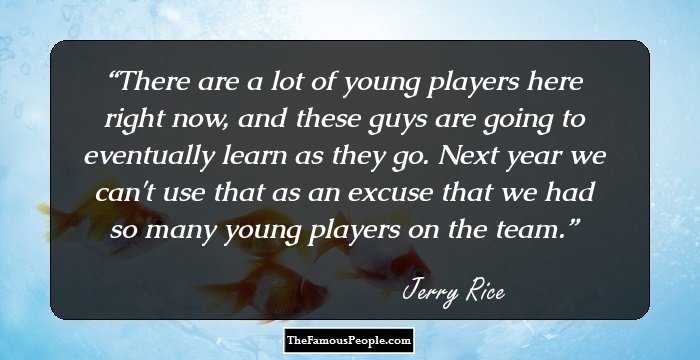 There are a lot of young players here right now, and these guys are going to eventually learn as they go. Next year we can't use that as an excuse that we had so many young players on the team. 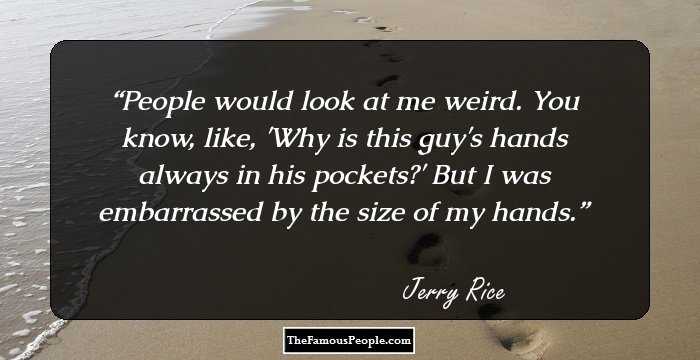 People would look at me weird. You know, like, 'Why is this guy's hands always in his pockets?' But I was embarrassed by the size of my hands. 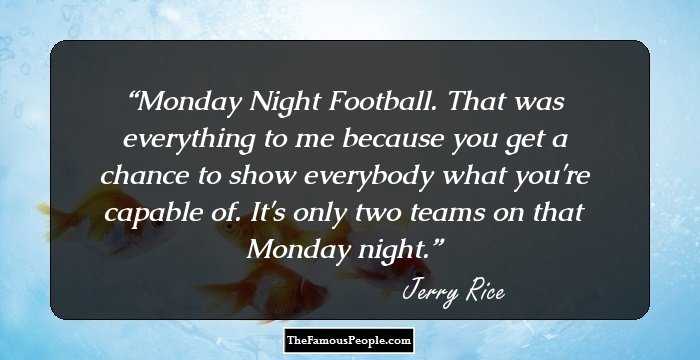 Monday Night Football. That was everything to me because you get a chance to show everybody what you're capable of. It's only two teams on that Monday night. 35 Joe Montana Quotes For Your Daily Dose of Inspiration 25 Great Quotes By Randy Savage For The Grapple Addicts