Famous As: Officer, Author, Journalist, Sport shooter, Writer
Born On: May 10, 1920
Died On: September 25, 2006
Born In: Los Angeles
Founder / Co Founder: American Pistol Institute (API)
Died At Age: 86
Jeff Cooper was an American Marine credited with creating the modern technique of handgun shooting. He is also renowned as an expert of history and use of small arms. He pursued his graduation from Stanford University in political science. In 1941, he received an endeavour in âUnited States Marine Corps (USMC). In 1976, âAmerican Pistol Institute (API)â located in Arizona was also founded by Cooper. Later it was named âThe Gunsite Academyâ. He took rifle and shotgun classes to military personnel and law enforcement agencies and civilians. Individuals and groups across the globe attended his on-site training. In 1992, he sold his firm. Following is a treasury of meaning, famous and popular quotes and sayings by Jeff Cooper which have been curated from his life, thoughts and works. Let us browse through the quotes and thoughts by Jeff Cooper on wise, man, smart, guitar, safety, hands, survive, momentum, change, family, citizen, police, department, development and more.
Listed In:
Writers
Quotes by Famous People
Media Personalities

The only acceptable response to the threat of lethal violence is immediate and savage counterattack. If you resist, you just may get killed. If you don't resist you almost certainly will get killed. It is a tough choice, but there is only one right answer. 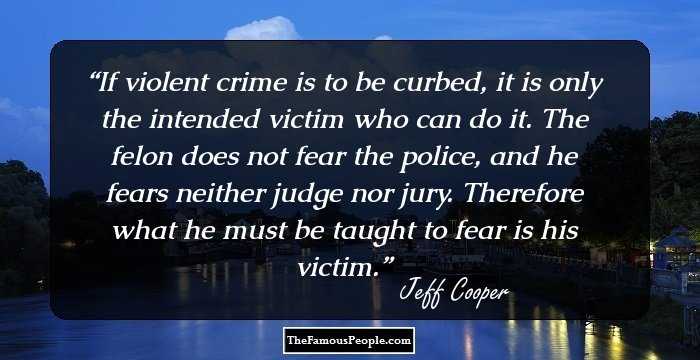 If violent crime is to be curbed, it is only the intended victim who can do it. The felon does not fear the police, and he fears neither judge nor jury. Therefore what he must be taught to fear is his victim. 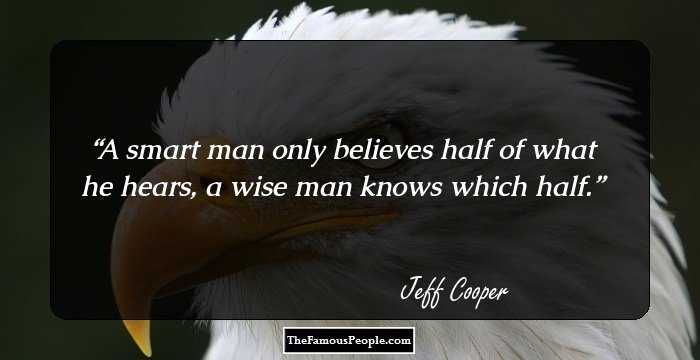 A smart man only believes half of what he hears, a wise man knows which half. 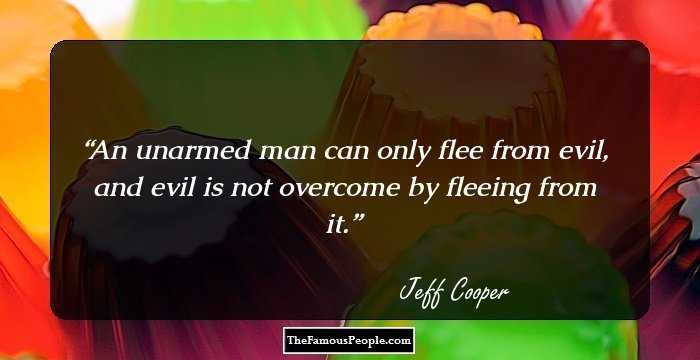 An unarmed man can only flee from evil, and evil is not overcome by fleeing from it. 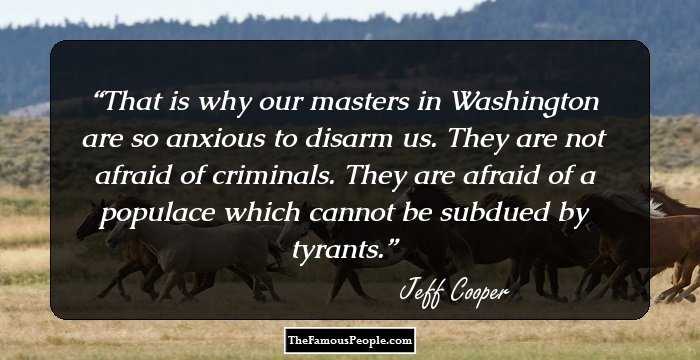 That is why our masters in Washington are so anxious to disarm us. They are not afraid of criminals. They are afraid of a populace which cannot be subdued by tyrants. 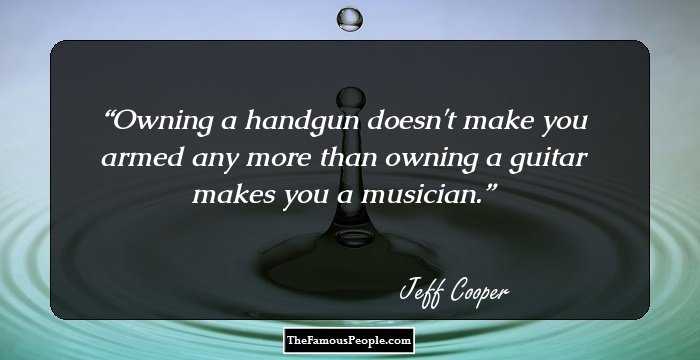 Owning a handgun doesn't make you armed any more than owning a guitar makes you a musician.

The rifle itself has no moral stature, since it has no will of its own. Naturally, it may be used by evil men for evil purposes, but there are more good men than evil, and while the latter cannot be persuaded to the path of righteousness by propaganda, they can certainly be corrected by good men with rifles. 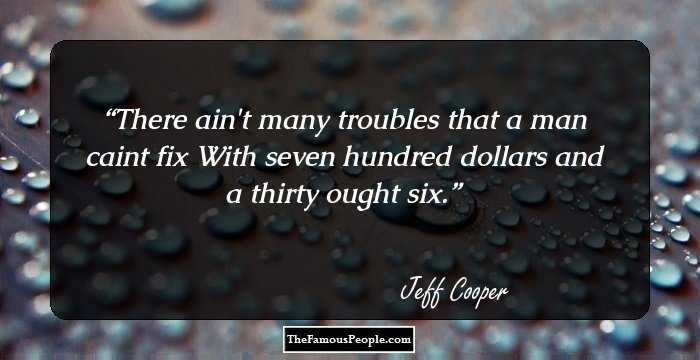 There ain't many troubles that a man caint fix With seven hundred dollars and a thirty ought six.

One bleeding-heart type asked me in a recent interview if I did not agree that 'violence begets violence.' I told him that it is my earnest endeavor to see that it does. I would like very much to ensure - and in some cases I have - that any man who offers violence to his fellow citizen begets a whole lot more in return than he can enjoy. 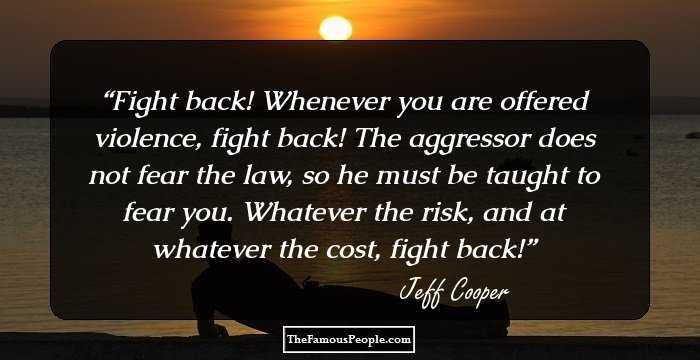 Fight back! Whenever you are offered violence, fight back! The aggressor does not fear the law, so he must be taught to fear you. Whatever the risk, and at whatever the cost, fight back! 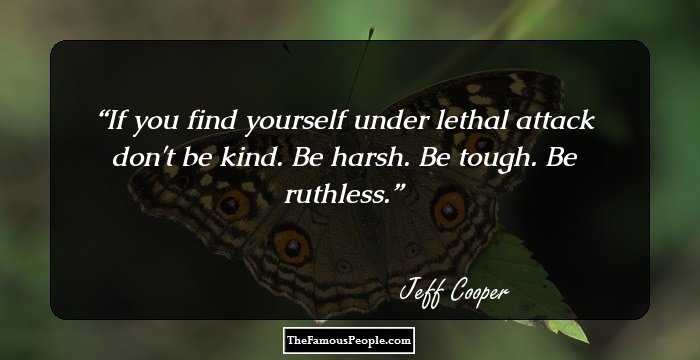 If you find yourself under lethal attack don't be kind. Be harsh. Be tough. Be ruthless.

According to Herodotus, the ancient Persians felt that what was necessary in the background of a young man entering adulthood was his ability to ride, shoot straight, and speak the truth. Perhaps we should now grant our college degrees to young men who measure up to that standard. 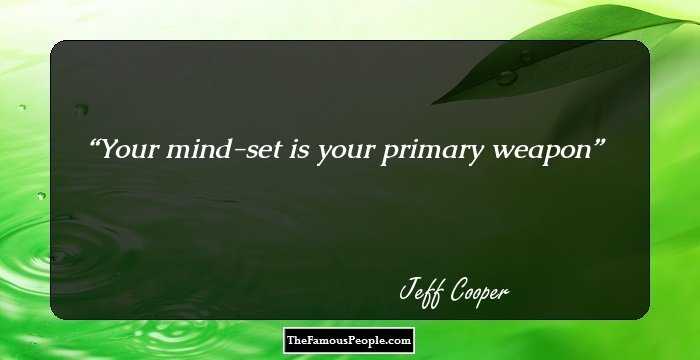 Your mind-set is your primary weapon

The police cannot protect the citizen at this stage of our development, and they cannot even protect themselves in many cases. It is up to the private citizen to protect himself and his family, and this is not only acceptable, but mandatory. 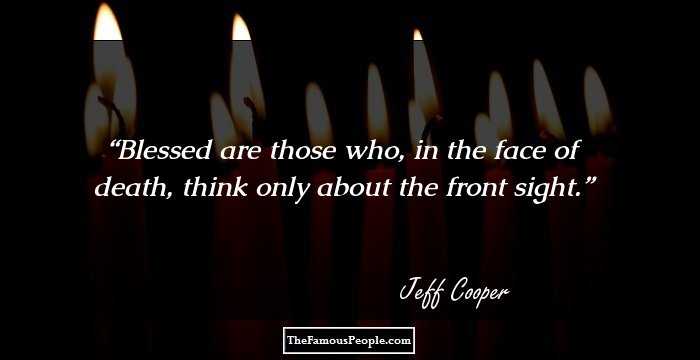 Blessed are those who, in the face of death, think only about the front sight. 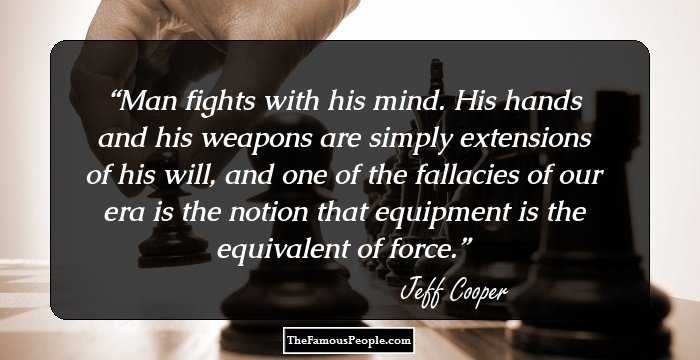 Man fights with his mind. His hands and his weapons are simply extensions of his will, and one of the fallacies of our era is the notion that equipment is the equivalent of force. 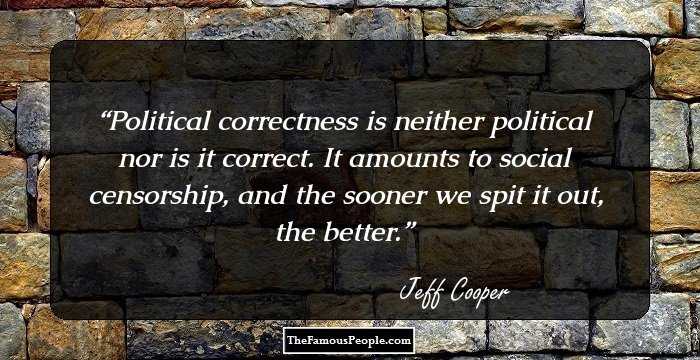 Political correctness is neither political nor is it correct. It amounts to social censorship, and the sooner we spit it out, the better.

One cannot legislate the maniacs off the street... these maniacs can only be shut down by an armed citizenry. Indeed bad things can happen in nations where the citizenry is armed, but not as bad as those which seem to be threatening our disarmed citizenry in this country at this time. 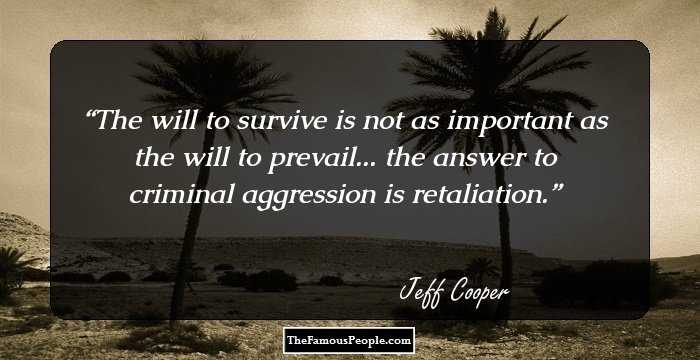 The will to survive is not as important as the will to prevail... the answer to criminal aggression is retaliation.

Observe your cat. It is difficult to surprise him. Why? Naturally his superior hearing is part of the answer, but not all of it. He moves well, using his senses fully. He is not preoccupied with irrelevancies. He's not thinking about his job or his image or his income tax. He is putting first things first, principally his physical security. Do likewise.

Not long ago it was easy to tell who the bad guys were. They carried Kalashnikovs. Now it is much more complicated, but one thing is sure - any man who covers his face and packs a gun is a legitimate target for any decent citizen. 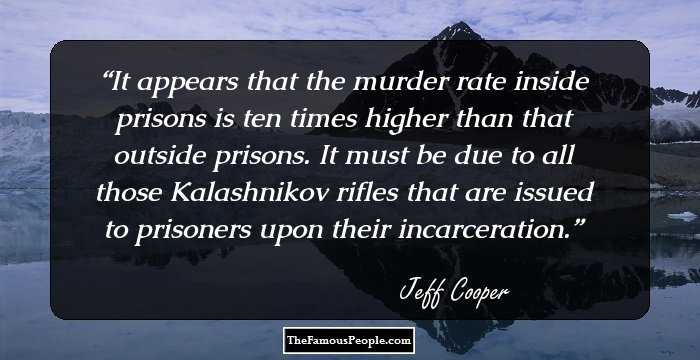 It appears that the murder rate inside prisons is ten times higher than that outside prisons. It must be due to all those Kalashnikov rifles that are issued to prisoners upon their incarceration.

Weapons compound man's power to achieve; they amplify the capabilities of both the good man and the bad, and to exactly the same degree, having no will of their own. Thus we must regard them as servants, not masters - and good servants to good men. Without them, man is diminished, and his opportunities to fulfill his destiny are lessened. An unarmed man can only flee from evil, and evil is not overcome by fleeing from it.

One correspondent, who is into psychology, notes that in his experience people who are hoplophobes are nearly always nutty in other ways, too. Hoplophobia [fear of guns], of course, is not simply an attitude but rather an aberration in which the sufferer clings to an idea which he himself knows to be unsound, such as the idea that inanimate instruments have a will of their own or that lawbreakers abide by the law.

The consensus is that no more than five to ten people in a hundred who die by gunfire in Los Angeles are any loss to society. These people fight small wars amongst themselves. It would seem a valid social service to keep them well-supplied with ammunition. 10 Suze Orman Quotes That Will Give You Financial Wisdom