Jared Harris is an English actor. He earned a Primetime Emmy Award nomination for his performance in âMad Men.â For his role in âChernoby!,â he earned a âPrimetime Emmy Awardâ nomination and bagged in the âBritish Academy Television Award.â Some of his notable film and television credits include âThe Crown,â âThe Expanse,â âThe Terror,â âFringe,â âLincoln,â âThe Curious Case of Benjamin Button,â âAllied,â âSherlock Homes: A Game of Shadowsâ and many more. We have rounded some famous quotes by Jared Harris on business, children, love, character, drama, school, evil, challenges, imagination, need, energy, violence, will, acceptance, work, history, happiness, etc. 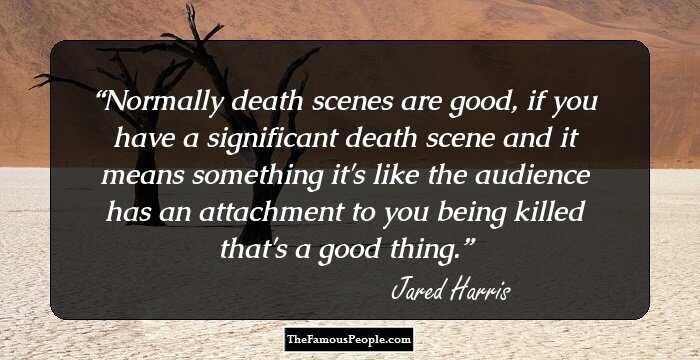 Normally death scenes are good, if you have a significant death scene and it means something it's like the audience has an attachment to you being killed that's a good thing. 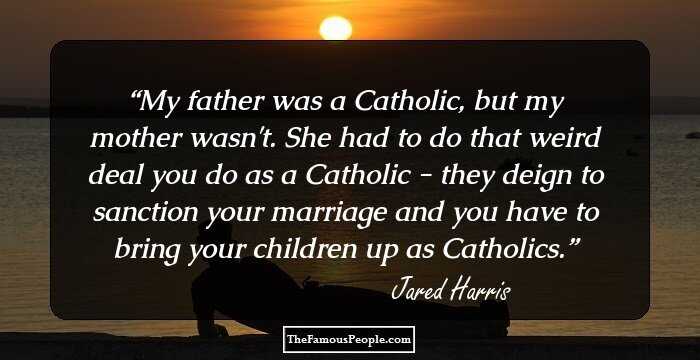 My father was a Catholic, but my mother wasn't. She had to do that weird deal you do as a Catholic - they deign to sanction your marriage and you have to bring your children up as Catholics. 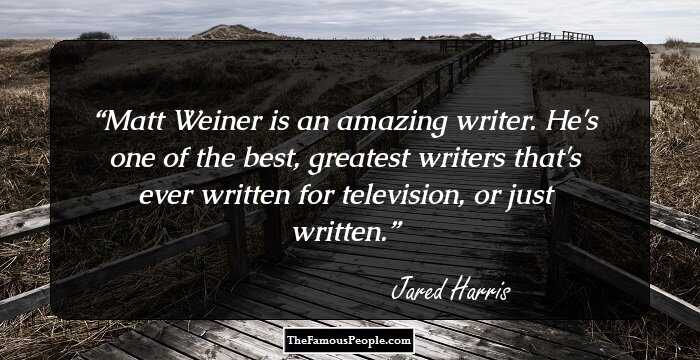 Matt Weiner is an amazing writer. He's one of the best, greatest writers that's ever written for television, or just written. 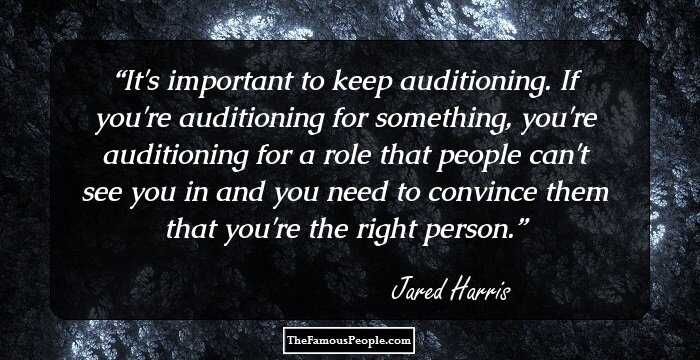 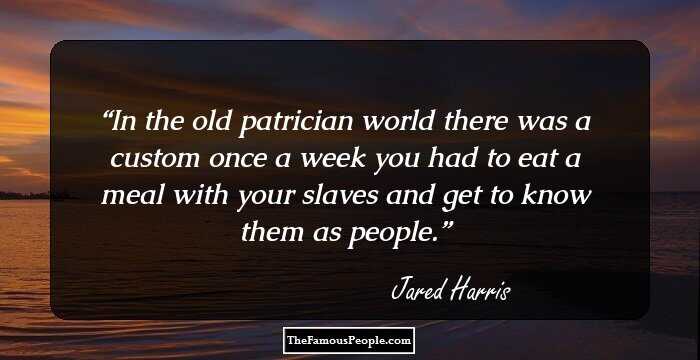 In the old patrician world there was a custom once a week you had to eat a meal with your slaves and get to know them as people. 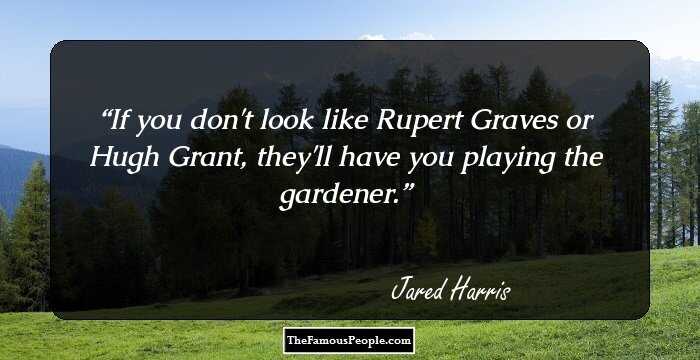 If you don't look like Rupert Graves or Hugh Grant, they'll have you playing the gardener. 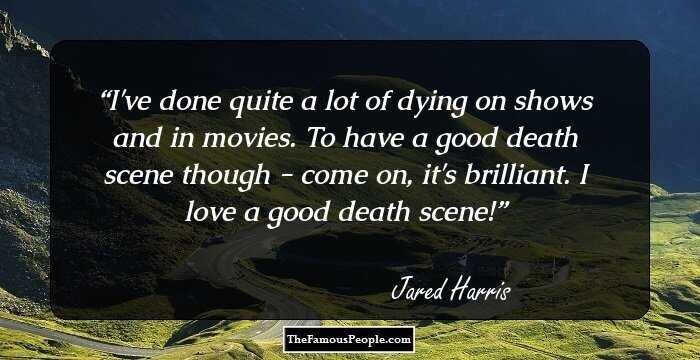 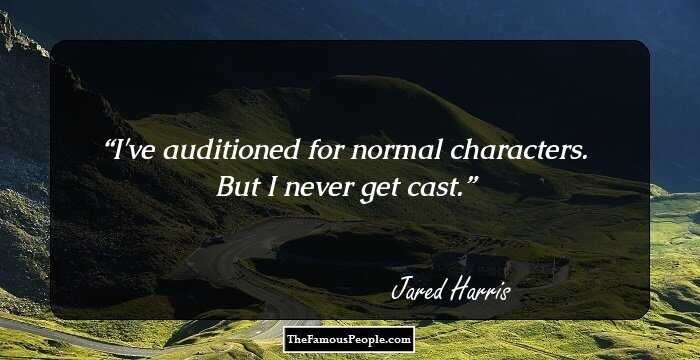 I've auditioned for normal characters. But I never get cast. 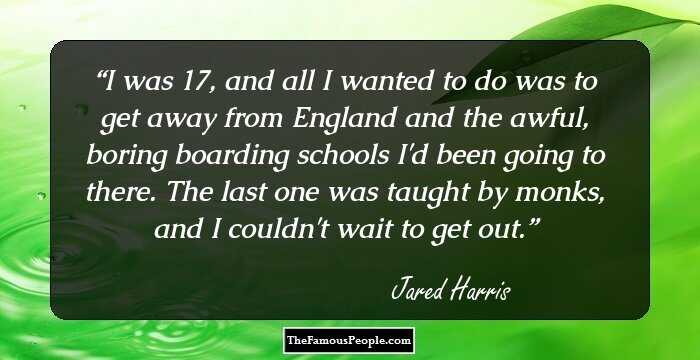 I was 17, and all I wanted to do was to get away from England and the awful, boring boarding schools I'd been going to there. The last one was taught by monks, and I couldn't wait to get out. 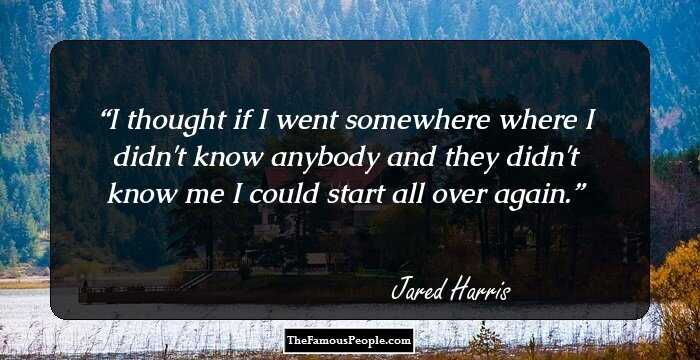 I thought if I went somewhere where I didn't know anybody and they didn't know me I could start all over again. 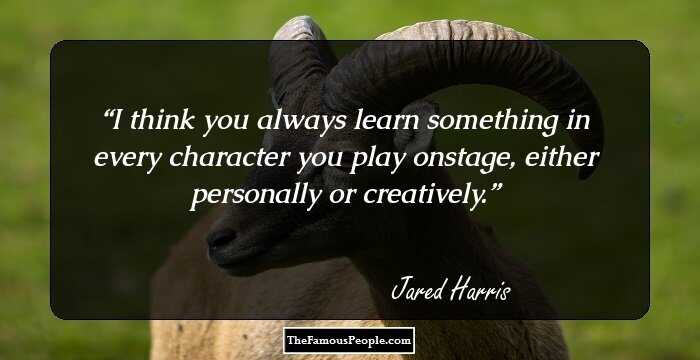 I think you always learn something in every character you play onstage, either personally or creatively. 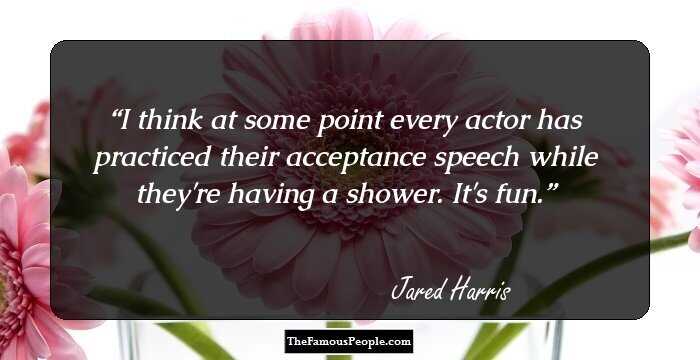 I think at some point every actor has practiced their acceptance speech while they're having a shower. It's fun. 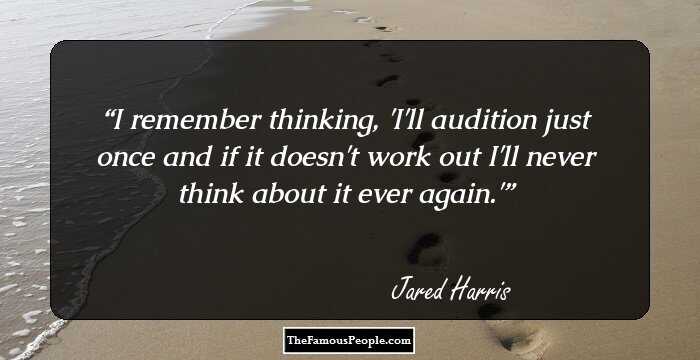 I remember thinking, 'I'll audition just once and if it doesn't work out I'll never think about it ever again.' 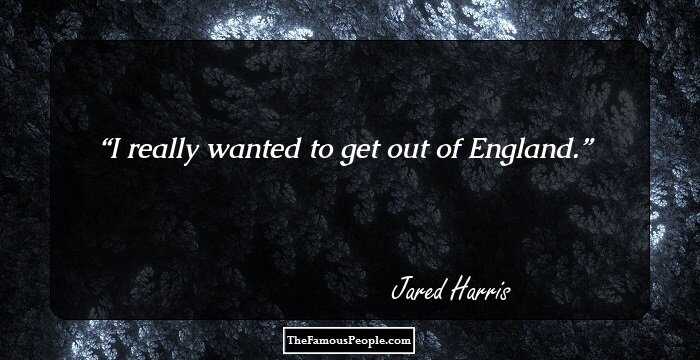 I really wanted to get out of England. 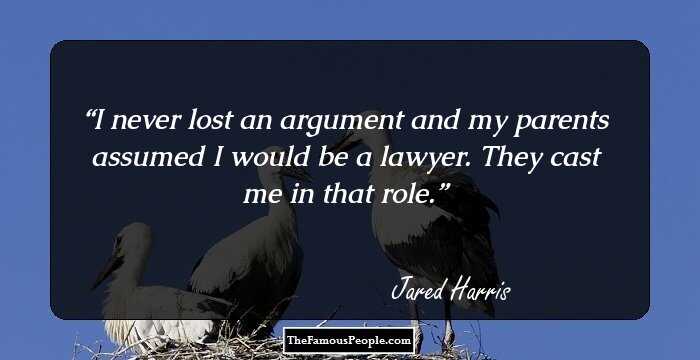 I never lost an argument and my parents assumed I would be a lawyer. They cast me in that role. 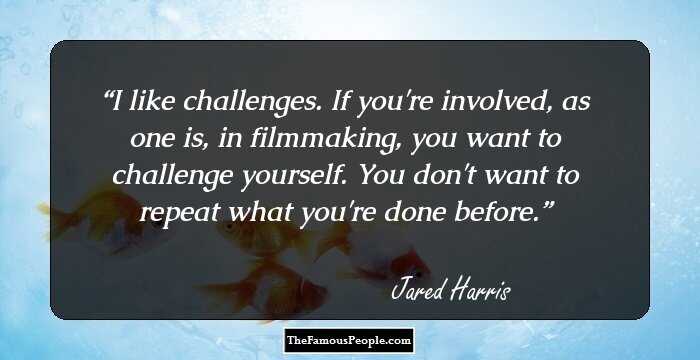 I like challenges. If you're involved, as one is, in filmmaking, you want to challenge yourself. You don't want to repeat what you're done before. 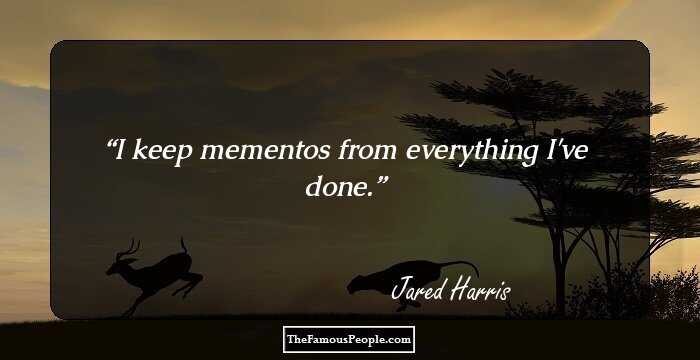 I keep mementos from everything I've done. 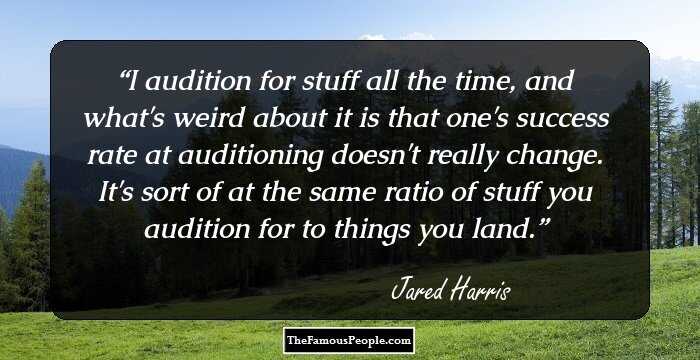 I audition for stuff all the time, and what's weird about it is that one's success rate at auditioning doesn't really change. It's sort of at the same ratio of stuff you audition for to things you land.

I like the adrenaline of live performance, whatever that is, appearing in front of an audience of any kind, whether it's one or a hundred or a thousand. It gives you a buzz of adrenaline, its exciting. The thing about that is that you want to make those nerves work for you in terms of an energy that's appropriate for the part and the performance, and not to distract the people who are watching so that they become nervous for you.

I wasn't aware of my dad being an actor when I was young. I remember there was an Australian children's entertainer on television called Ralph Harris and when I'd say my father was an actor, kids would say, you know, 'oh, is he Ralph Harris?' And I had to say no and then they would lose interest.

If you want to do your version, go off and write it. You bring your knowledge to it, and you can use that to shape it and color it, but it's someone else's version of that character. You're not actually playing the real person.

Marriages had different meanings back then than they do now, they were used to cement agreements between families, business deals and things like that. The idea of marriages being arranged for love is some sort of modern idea, really.

Often in films there's more of allowing the actors to make the dialogue fit better in their own. Also, you get to a location and the geography is different, so the lines don't line up the right way, so you do have to change stuff.