Irrfan Khan was an illustrious Indian actor who worked in Hindi cinema as well as in American and British films. His career spanned over three decades and he won various awards and accolades for his phenomenal performances, including an âAsian Film Award,â four âFilmfare Awards,â and a âNational Film Award.â He was also a recipient of the âPadma Shri Award,â Indiaâs fourth highest civilian honour, in 2011. Some of his popular works include âPaan Singh Tomar,â âLife in a...Metro,â âMaqbool,â âTalvaar,â âThe Namesake,â âSlumdog Millionaire,â âHindi Medium,â âLife of Pie,â âHaider,â âJurassic World,â and many more. We have curated some famous quotes by Irrfan Khan, which have been amassed from his movies, thoughts, dialogues and interviews. Let us browse through the collection of some interesting quotes by Irrfan Khan. 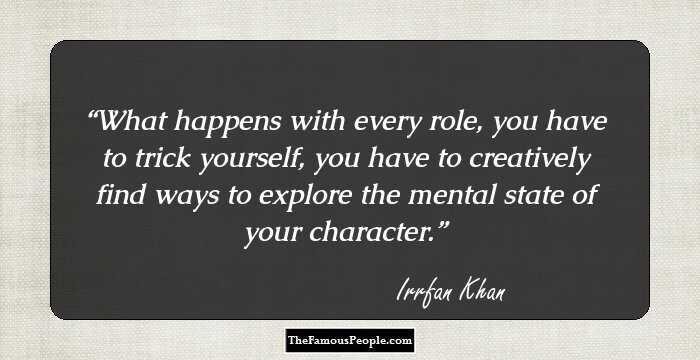 What happens with every role, you have to trick yourself, you have to creatively find ways to explore the mental state of your character. 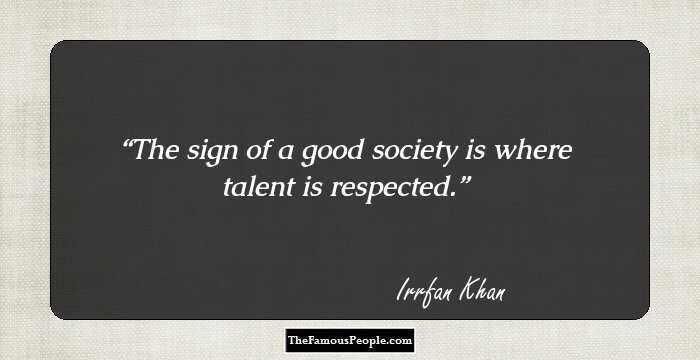 The sign of a good society is where talent is respected. 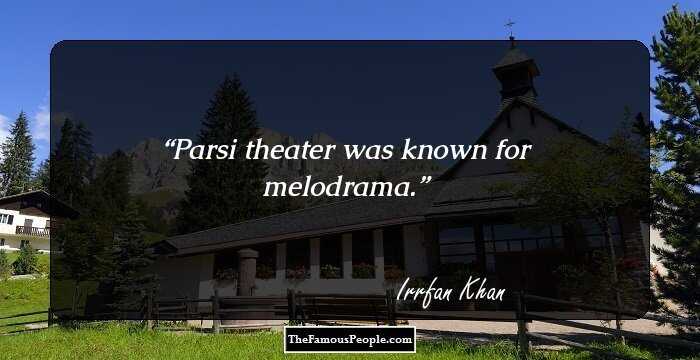 Parsi theater was known for melodrama. 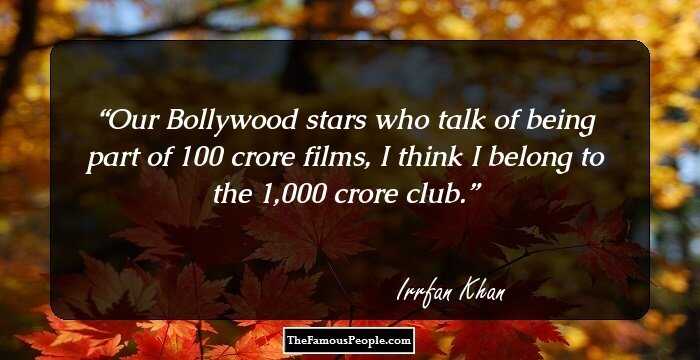 Our Bollywood stars who talk of being part of 100 crore films, I think I belong to the 1,000 crore club. 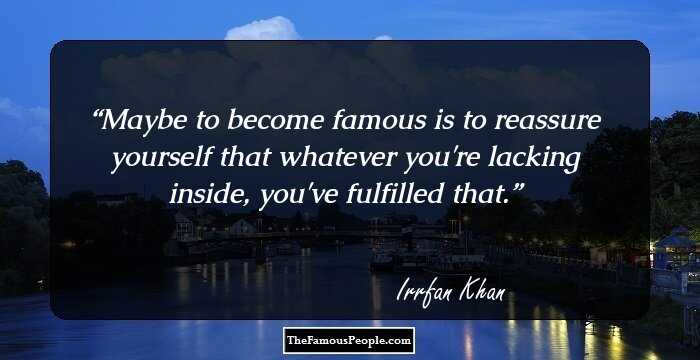 Maybe to become famous is to reassure yourself that whatever you're lacking inside, you've fulfilled that. 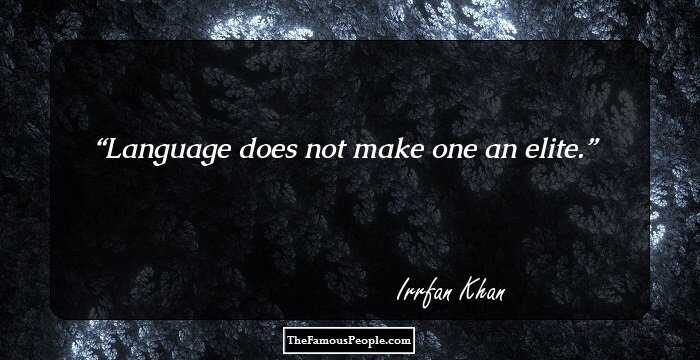 Language does not make one an elite. 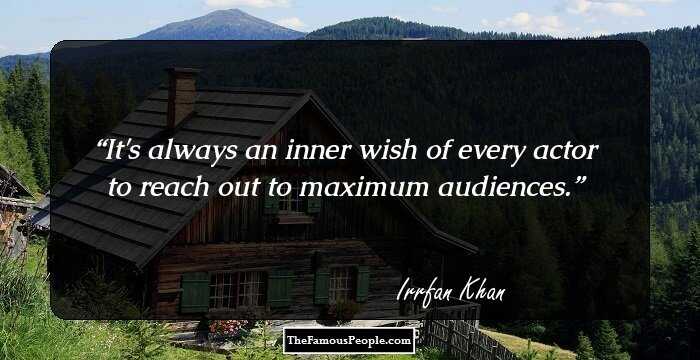 It's always an inner wish of every actor to reach out to maximum audiences. 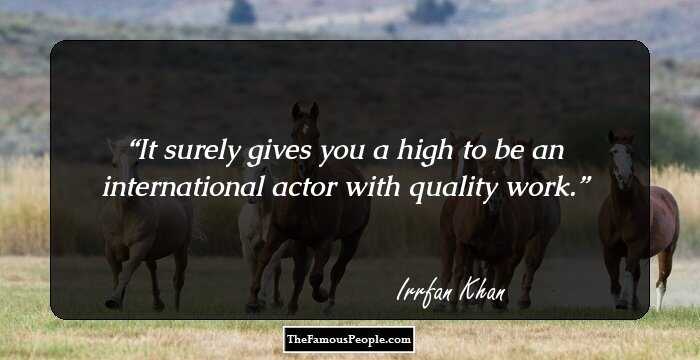 It surely gives you a high to be an international actor with quality work. 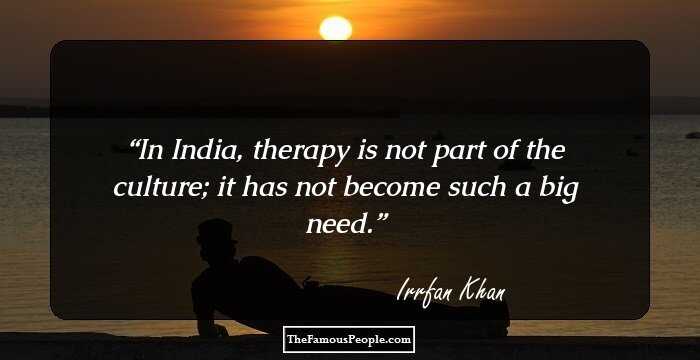 In India, therapy is not part of the culture; it has not become such a big need. 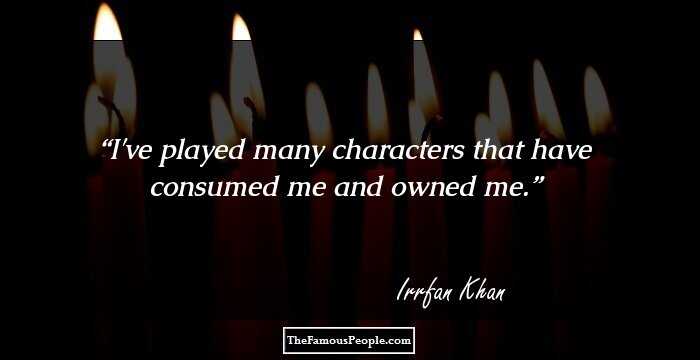 I've played many characters that have consumed me and owned me. 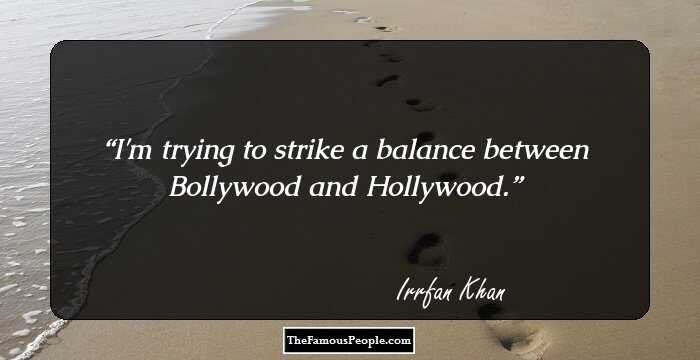 I'm trying to strike a balance between Bollywood and Hollywood. 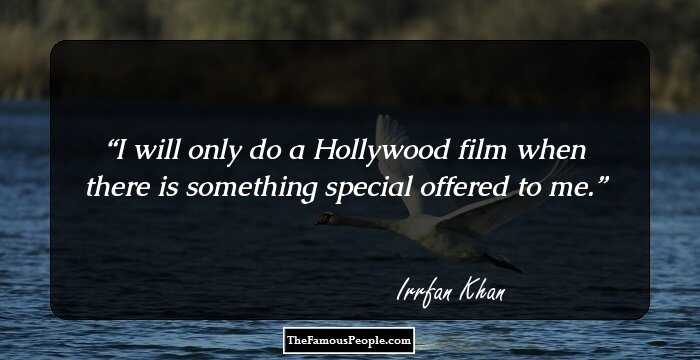 I will only do a Hollywood film when there is something special offered to me. 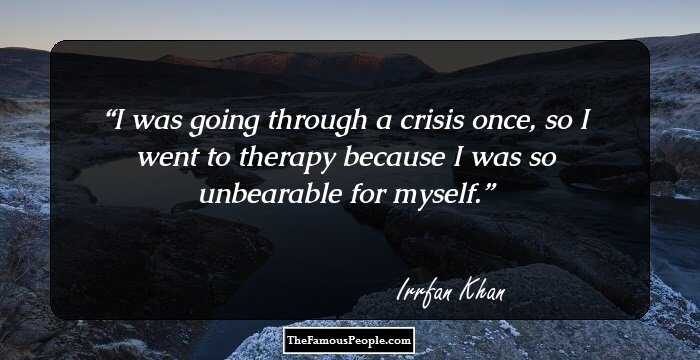 I was going through a crisis once, so I went to therapy because I was so unbearable for myself. 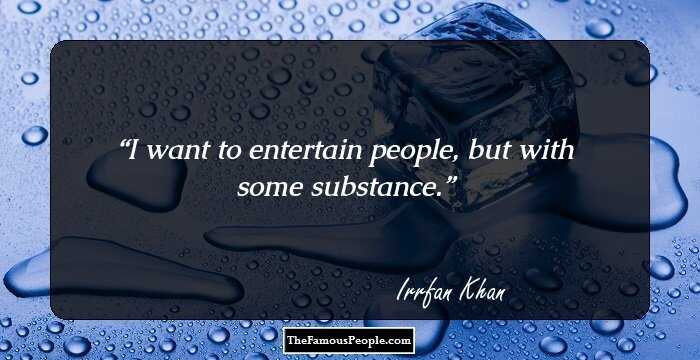 I want to entertain people, but with some substance. 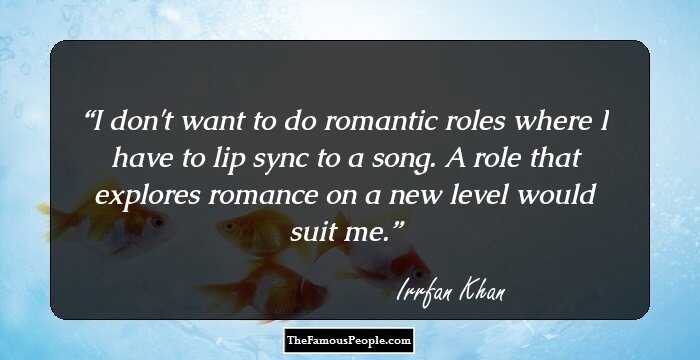 I don't want to do romantic roles where I have to lip sync to a song. A role that explores romance on a new level would suit me. 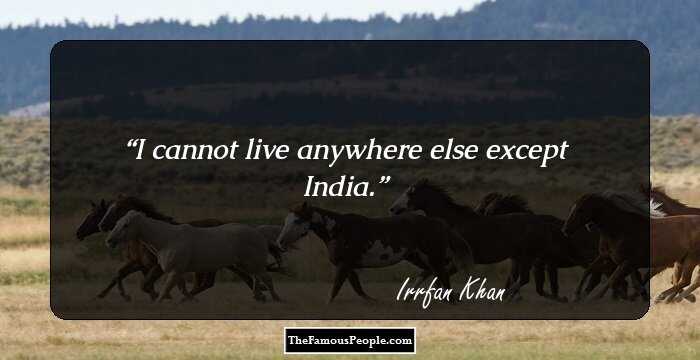 I cannot live anywhere else except India. 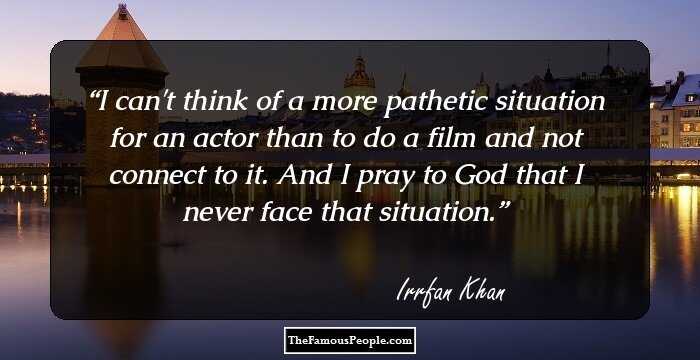 I can't think of a more pathetic situation for an actor than to do a film and not connect to it. And I pray to God that I never face that situation. 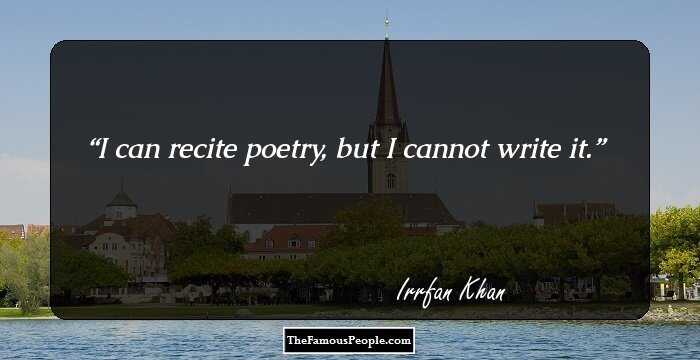 I can recite poetry, but I cannot write it. 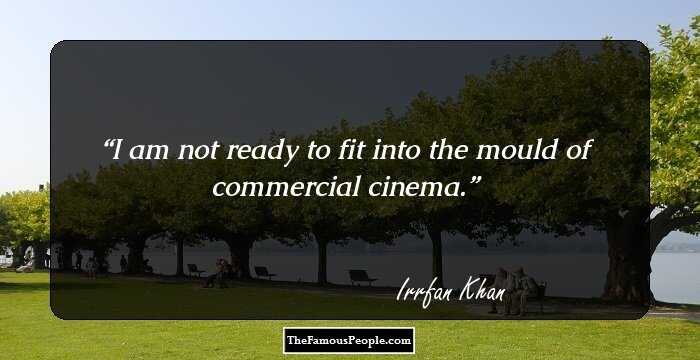 I am not ready to fit into the mould of commercial cinema. 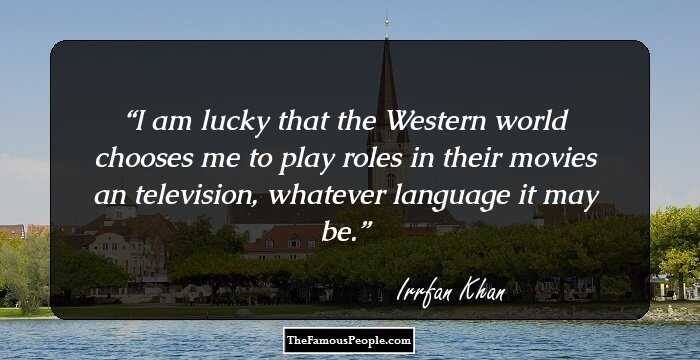 I am lucky that the Western world chooses me to play roles in their movies an television, whatever language it may be. 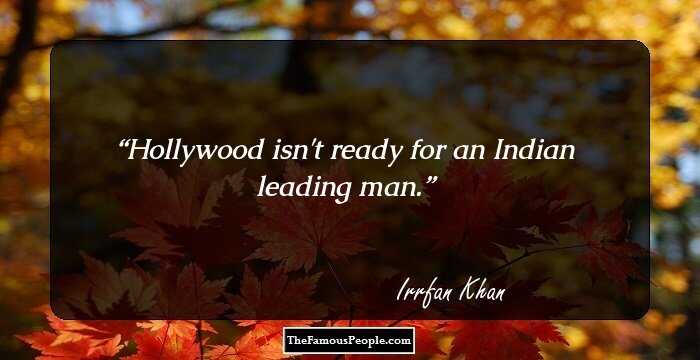 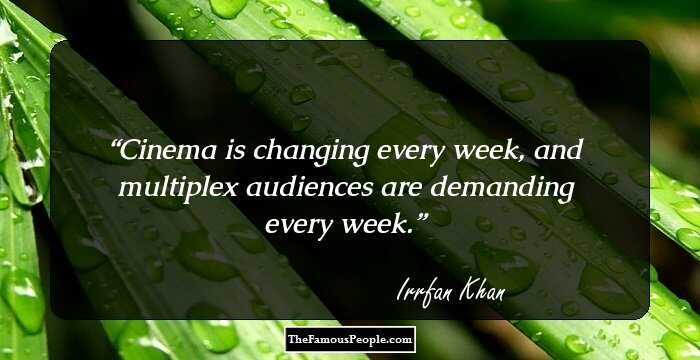 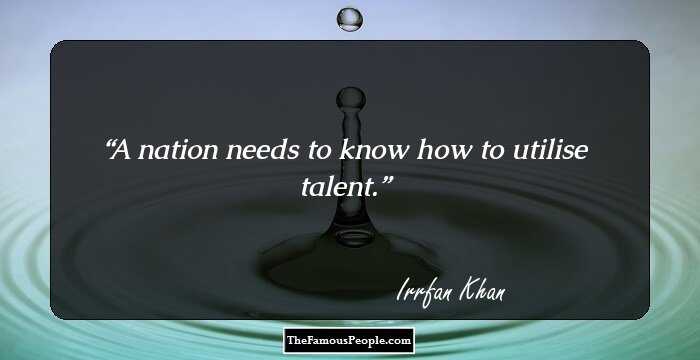 A nation needs to know how to utilise talent. 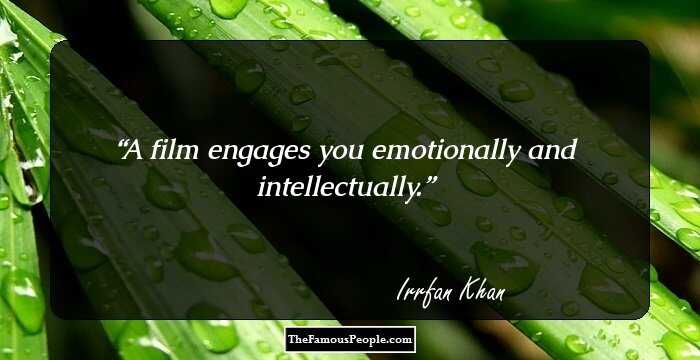 A film engages you emotionally and intellectually.