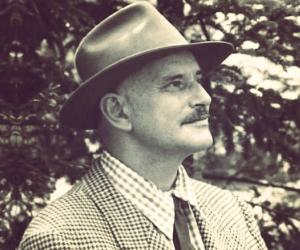 Henry Beston was a renowned American writer and naturalist. Beston started his career by teaching at the âUniversity of Lyonâ. He later joined Harvard as an Assistant Professor of English. In the year 1915, Beston joined the âFrench Armyâ. He penned down his experiences while serving in âle Bois le Pretreâ and at the âBattle of Verdunâ in his first book, âA Volunteer Poiluâ, which was released in 1918. Shortly after that, he became a press representative of the âU.S Navyâ. After World War I, he began writing fairytales. âThe Outermost Houseâ is considered to be his best work till date. He is acknowledged as one of the fathers of modern environmental movement. âFull Speed Aheadâ, âThe Starlight Wonder Bookâ, âThe Sons of Kaiâ, âFive Bears and Mirandaâ and âThe Tree That Runawayâ are a few of his other notable works. His sense of compassion and love for his environment, animals and nature are reflected in his work, thoughts and views. Following are some famous thoughts and quotes by Henry Beston that will make you love and admire the greatest gifts to mankind by God, Nature, a bit more. 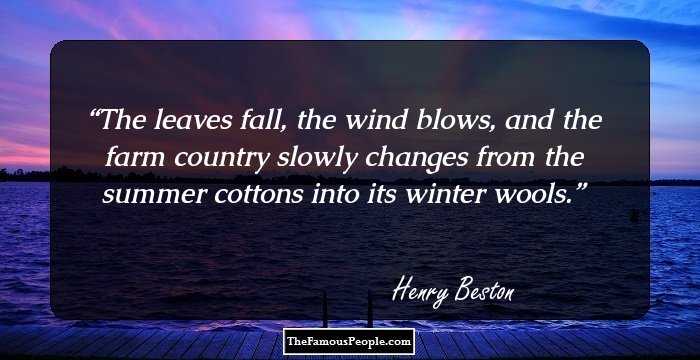 The leaves fall, the wind blows, and the farm country slowly changes from the summer cottons into its winter wools. 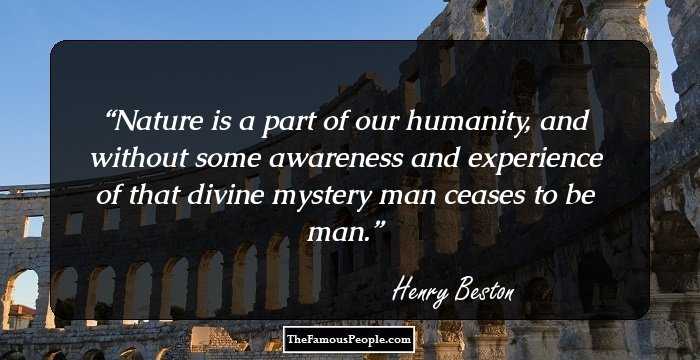 Nature is a part of our humanity, and without some awareness and experience of that divine mystery man ceases to be man.

We patronize the animals for their incompleteness, for their tragic fate of having taken form so far below ourselves. And therein we err, and greatly err. For the animal shall not be measured by man. In a world older and more complete than ours, they are more finished and complete, gifted with extensions of the senses we have lost or never attained, living by voices we shall never hear. They are not brethren, they are not underlings; they are other Nations, caught with ourselves in the net of life and time. 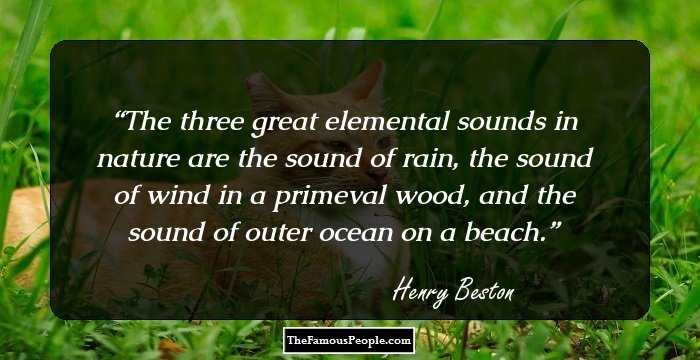 The creatures with whom we share the planet and whom, in our arrogance, we wrongly patronize for being lesser forms, they are not brethren, they are not underlings, they are other nations, caught with ourselves in the net of life and time, fellow prisoners of the splendour and travail of the Earth. 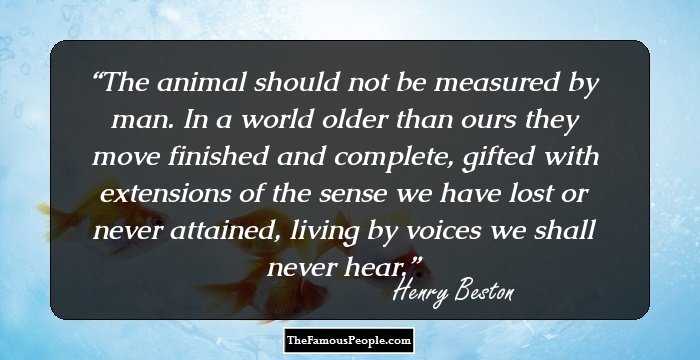 The animal should not be measured by man. In a world older than ours they move finished and complete, gifted with extensions of the sense we have lost or never attained, living by voices we shall never hear. 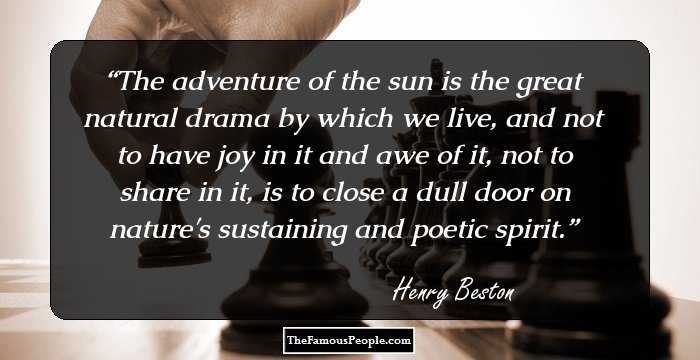 The adventure of the sun is the great natural drama by which we live, and not to have joy in it and awe of it, not to share in it, is to close a dull door on nature's sustaining and poetic spirit. 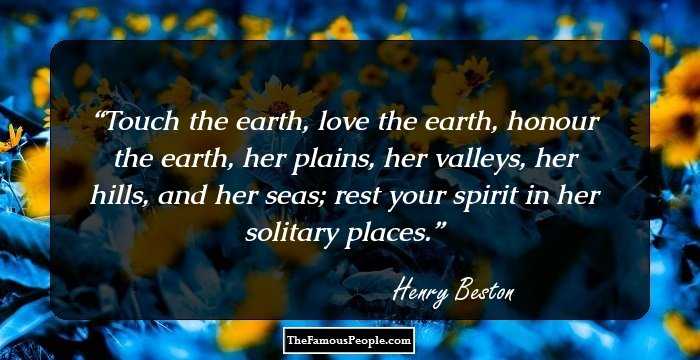 Touch the earth, love the earth, honour the earth, her plains, her valleys, her hills, and her seas; rest your spirit in her solitary places.

Hold your hands out over the earth as over a flame. To all who love her, who open to her the doors of their veins, she gives of her strength, sustaining them with her own measureless tremor of dark life. Touch the earth, love the earth, honor the earth, her plains, her valleys, her hills, and her seas; rest your spirit in her solitary places. For the gifts of life are the earth's and they are given to all, and they are the songs of birds at daybreak, Orion and the Bear, and dawn seen over ocean from the beach.

The world today is sick to its thin blood for lack of elemental things, for fire before the hands, for water welling from the earth, for air, for the dear earth itself underfoot. In my world of beach and june these elemental presences lived and had their being...

Our civilization has fallen out of touch with night. With lights, we drive the holiness and beauty of night back to the forests and the sea; the little villages, the crossroads even, will have none of it. Are modern folk, perhaps, afraid of night? Do they fear that vast serenity, the mystery of infinite space, the austerity of stars? 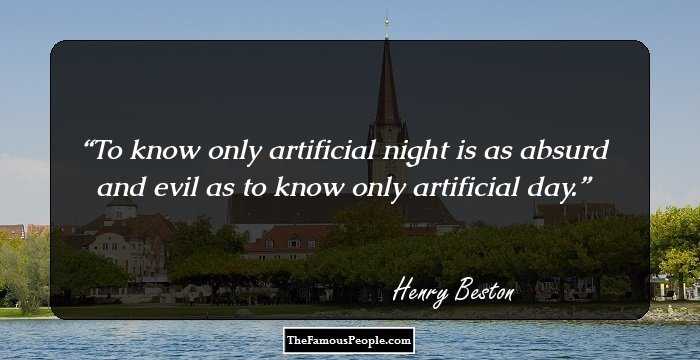 We of the age of the machines, having delivered ourselves of nocturnal enemies, now have a dislike of night itself. With lights and ever more lights, we drive the holiness and beauty of night back to the forests and the sea. 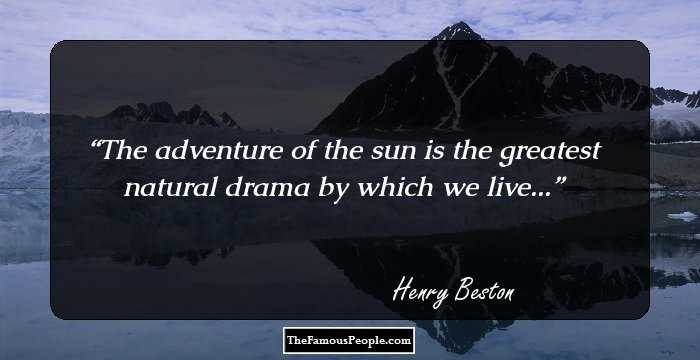 The adventure of the sun is the greatest natural drama by which we live... 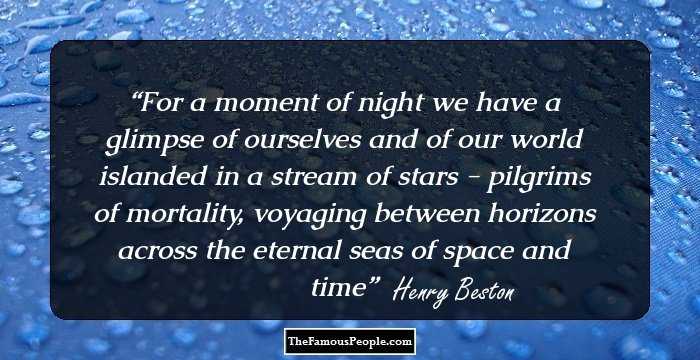 For a moment of night we have a glimpse of ourselves and of our world islanded in a stream of stars - pilgrims of mortality, voyaging between horizons across the eternal seas of space and time 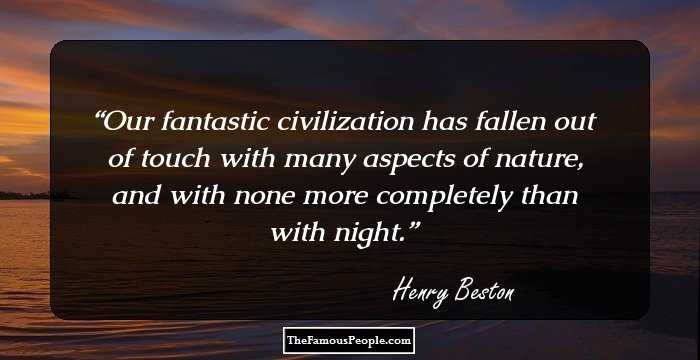 Our fantastic civilization has fallen out of touch with many aspects of nature, and with none more completely than with night. 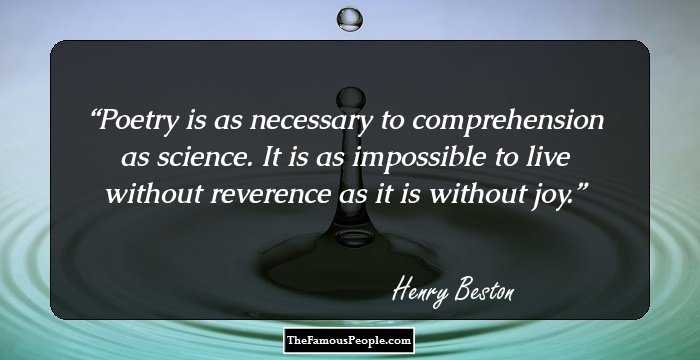 Poetry is as necessary to comprehension as science. It is as impossible to live without reverence as it is without joy.

Learn to reverence night and to put away the vulgar fear of it, for, with the banishment of night from the experience of man, there vanishes as well a religious emotion, a poetic mood, which gives depth to the adventure of humanity. 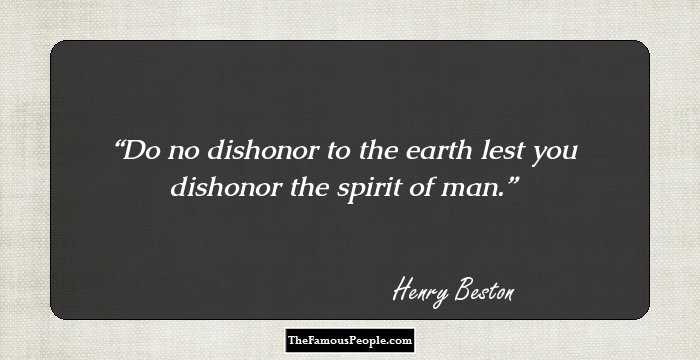 Do no dishonor to the earth lest you dishonor the spirit of man.

Expect Nature to answer to your human values as to come into your house and sit in a chair. The economy of nature, its checks and balances, its measurements of competing life - all this is its great marvel and has an ethic of its own.

Poor body, time and the long years were the first tailors to teach you the merciless use of clothes. Though some scold today because you are too much seen, to my mind, you are not seen fully enough or often enough when you are beautiful. 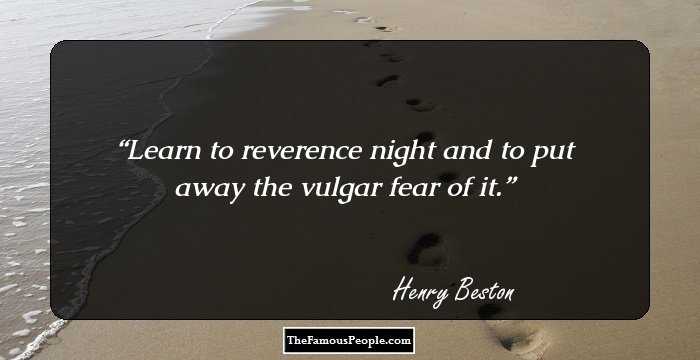 Learn to reverence night and to put away the vulgar fear of it. 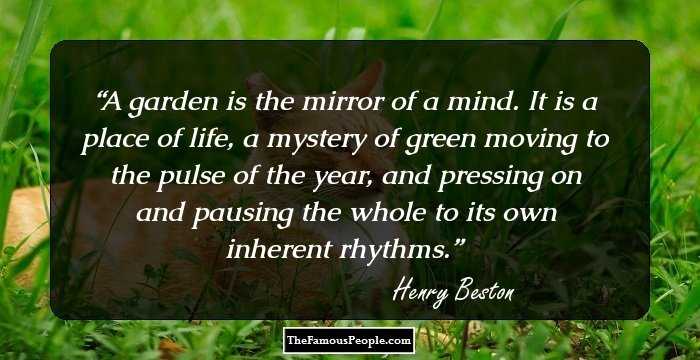 A garden is the mirror of a mind. It is a place of life, a mystery of green moving to the pulse of the year, and pressing on and pausing the whole to its own inherent rhythms. 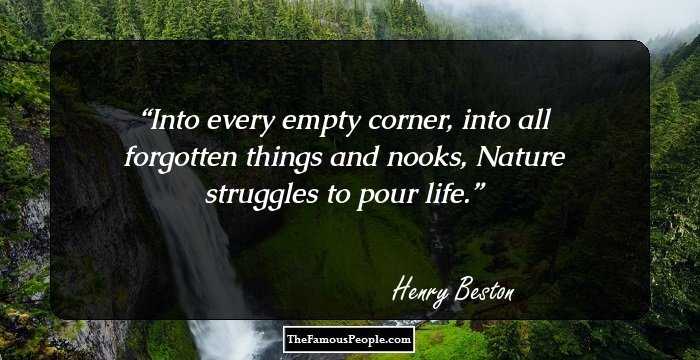 Into every empty corner, into all forgotten things and nooks, Nature struggles to pour life. 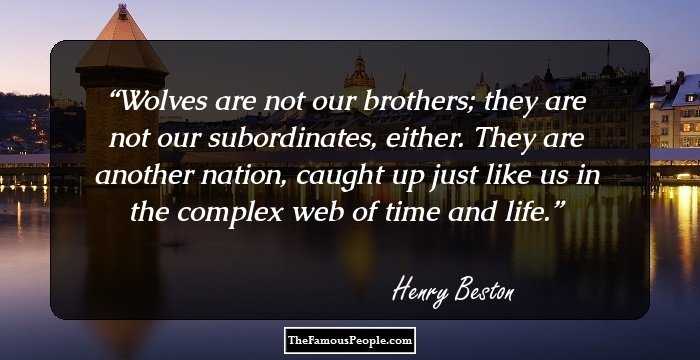 Wolves are not our brothers; they are not our subordinates, either. They are another nation, caught up just like us in the complex web of time and life. 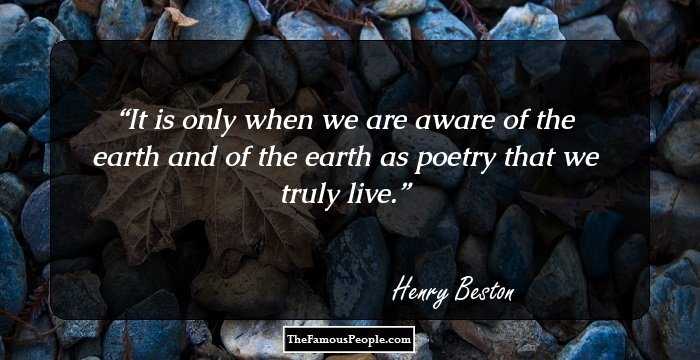 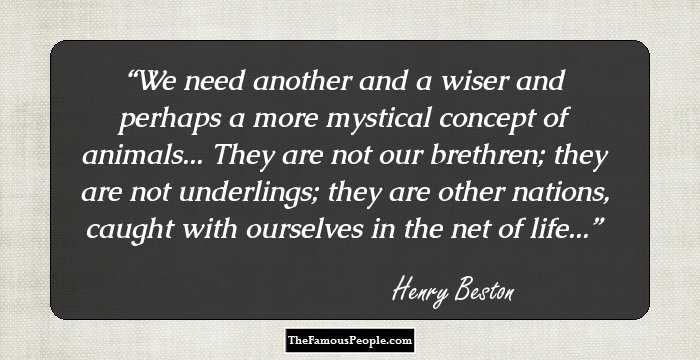 We need another and a wiser and perhaps a more mystical concept of animals... They are not our brethren; they are not underlings; they are other nations, caught with ourselves in the net of life...