Famous As: Former Emperor of Ethiopia (1930 - 1936, 1941 - 1974)
Born On: July 23, 1892
Died On: August 27, 1975
Born In: Ejersa Goro, Ethiopia
Founder / Co Founder: Organisation of African Unity
Died At Age: 83
Haile Selassie was a distinguished Ethiopian emperor and regent. He was a member of Solomonic Dynasty and also founded and served as the Chairperson of the Organization of African Unity. He became a prominent political figure and played a pivotal role in shaping the Ethiopian government. His progressive policies were well-received by people and soon he became the emperor. He also became the first Ethiopian ruler who travelled across the world. The Rastafarian religion considers him as a messiah who had the power to unify the African races. We bring to you a corpus of quotes and sayings by the renowned rule which have been curated from his life, speeches, thoughts and works. Following are some popular quotes and sayings by Haile Selassie that will give you a glimpse of his political mind.
Listed In:
Historical Personalities 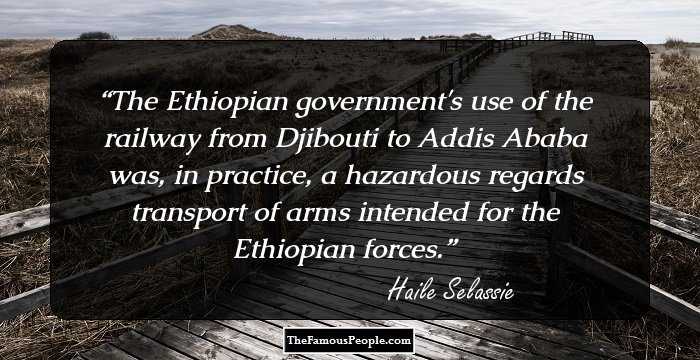 The Ethiopian government's use of the railway from Djibouti to Addis Ababa was, in practice, a hazardous regards transport of arms intended for the Ethiopian forces. 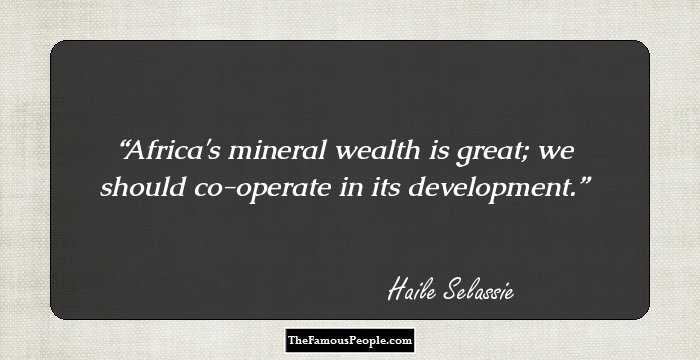 Africa's mineral wealth is great; we should co-operate in its development. 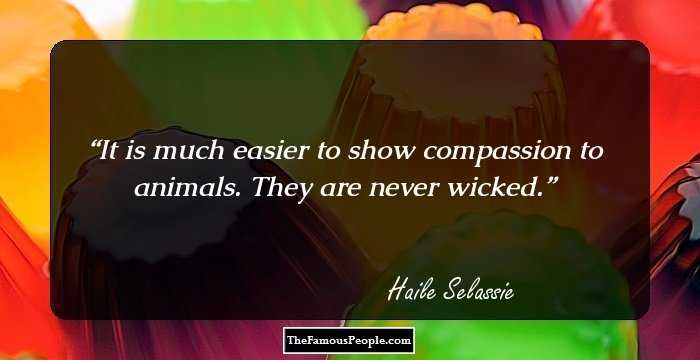 It is much easier to show compassion to animals. They are never wicked. 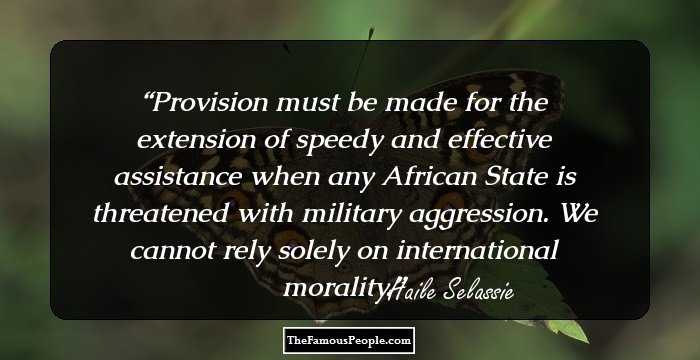 Provision must be made for the extension of speedy and effective assistance when any African State is threatened with military aggression. We cannot rely solely on international morality. 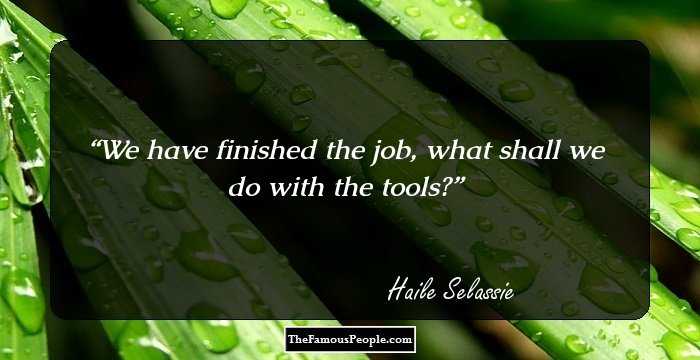 We have finished the job, what shall we do with the tools? 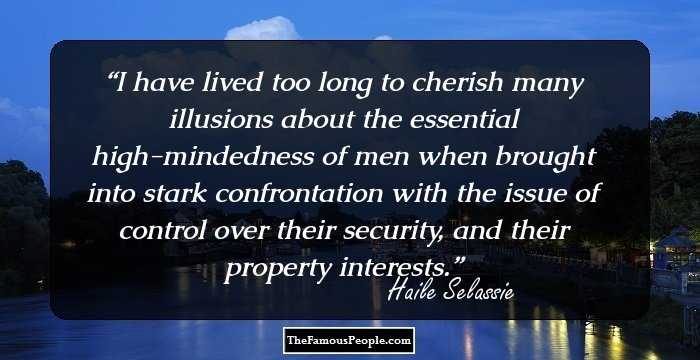 I have lived too long to cherish many illusions about the essential high-mindedness of men when brought into stark confrontation with the issue of control over their security, and their property interests.

Outside the kingdom of the Lord there is no nation which is greater than any other. God and history will remember your judgment. 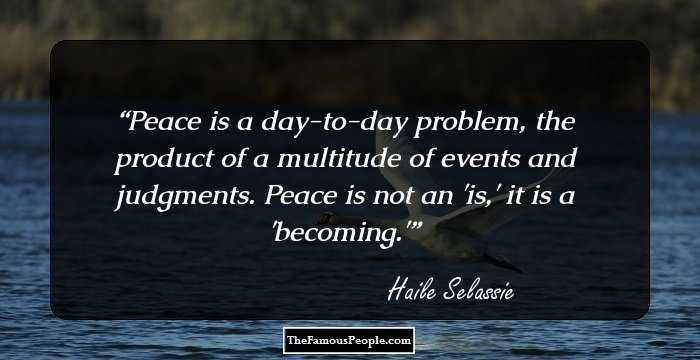 Peace is a day-to-day problem, the product of a multitude of events and judgments. Peace is not an 'is,' it is a 'becoming.' 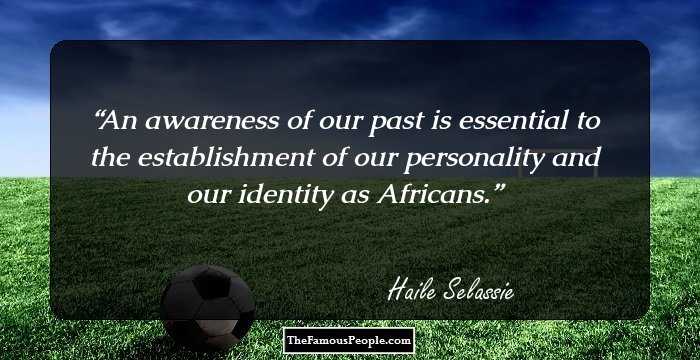 An awareness of our past is essential to the establishment of our personality and our identity as Africans. 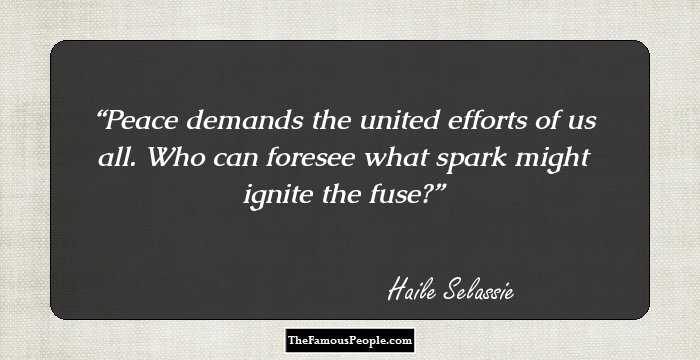 Peace demands the united efforts of us all. Who can foresee what spark might ignite the fuse? 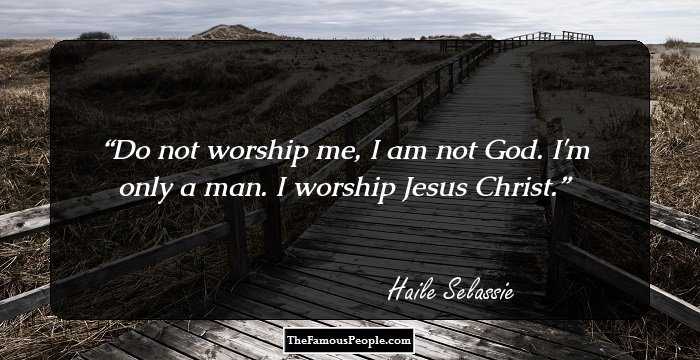 Do not worship me, I am not God. I'm only a man. I worship Jesus Christ.

Me God I
Haile Selassie 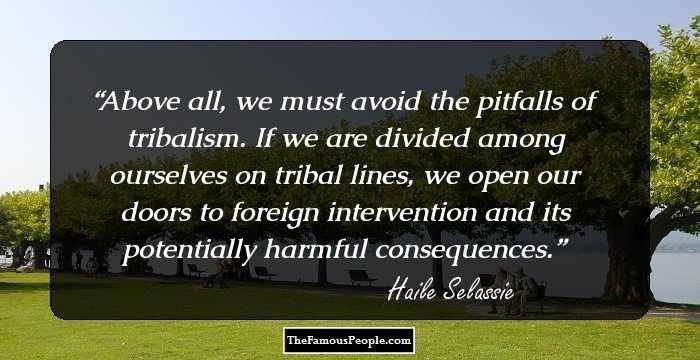 Above all, we must avoid the pitfalls of tribalism. If we are divided among ourselves on tribal lines, we open our doors to foreign intervention and its potentially harmful consequences.

We must become bigger than we have been: more courageous, greater in spirit, larger in outlook. We must become members of a new race, overcoming petty prejudice, owing our ultimate allegiance not to nations but to our fellow men within the human community.

Throughout history, it has been the inaction of those who could have acted; the indifference of those who should have known better; the silence of the voice of justice when it mattered most; that has made it possible for evil to triumph.

History teaches us that unity is strength, and cautions us to submerge and overcome our differences in the quest for common goals, to strive, with all our combined strength, for the path to true African brotherhood and unity.

The Charter of the United Nations expresses the noblest aspirations of man: abjuration of force in the settlement of disputes between states; the assurance of human rights and fundamental freedoms for all without distinction as to race, sex, language or religion; the safeguarding of international peace and security.

Africa shares with Asia a common background of colonialism, of exploitation, of discrimination, of oppression. At Bandung, African and Asian States dedicated themselves to the liberation of their two continents from foreign domination and affirmed the right of all nations to develop in their own way, free of any external interference.

If a strong government finds that it can, with impunity, destroy a weak people, then the hour has struck for that weak people to appeal to the League of Nations to give its judgment in all freedom. God and history will remember your judgment.

The preservation of peace and the guaranteeing of man's basic freedoms and rights require courage and eternal vigilance: courage to speak and act - and if necessary, to suffer and die - for truth and justice; eternal vigilance, that the least transgression of international morality shall not go undetected and unremedied.

We all wish to live. We all seek a world in which men are freed of the burdens of ignorance, poverty, hunger and disease. And we shall all be hard-pressed to escape the deadly rain of nuclear fall-out should catastrophe overtake us.

Thousands of years ago, civilizations flourished in Africa which suffer not at all by comparison with those of other continents. In those centuries, Africans were politically free and economically independent. Their social patterns were their own and their cultures truly indigenous.

The nations of Africa, as is true of every continent of the world, from time to time dispute among themselves. These quarrels must be confined to this continent and quarantined from the contamination of non-African interference.

This world was not created piecemeal. Africa was born no later and no earlier than any other geographical area on this globe. Africans, no more and no less than other men, possess all human attributes, talents and deficiencies, virtues and faults.

We have before us the examples of the U.S.A. and the U.S.S.R. We must remember how long these required to achieve their union. When a solid foundation is laid, if the mason is able and his materials good, a strong house can be built.

The commentators of 1963 speak, in discussing Africa, of the Monrovia States, the Brazzaville Group, the Casablanca Powers, of these and many more. Let us put an end to these terms. What we require is a single African organisation through which Africa's single voice may be heard, within which Africa's problems may be studied and resolved.