26 Guy Ritchie Quotes For Those Who Love Thrillers

Famous As: Producer and Director Known for His Crime and Action Films
Born On: September 10, 1968
Born In: Hertfordshire, England, United Kingdom
Age: 54 Years
Guy Ritchie is a celebrated English filmmaker, producer, screenwriter and director who is renowned for making crime films. In the middle of 90s he quit his secondary school and got an entry level job in the film industry. Thereafter, he slowly started his career by directing commercials and music videos. Some of his notable movies include, âLove, Stock And Two Smoking Barrelsâ, âSherlock Holmesâ, âSnatchâ, âSherlock Homes: A Game of Shadowsâ and âRevolverâ amongst various others. Ritchie specialises in crime thrillers and suspense films. His works evolve around lower class misfits and blue collar hooligans. Some popular quotable quotes and sayings by Guy Ritchie have been curated from his movies, writings, dialogues, films, thoughts, work and life which are sure to inspire you. Take a look at the famous quotes and thoughts by Guy Ritchie on realize, point, stronger, suspense, mind, enemy, writings, motivated, world, understand, interesting, pleasure, violence, movies, death and more.
Listed In:
Film & Theater Personalities 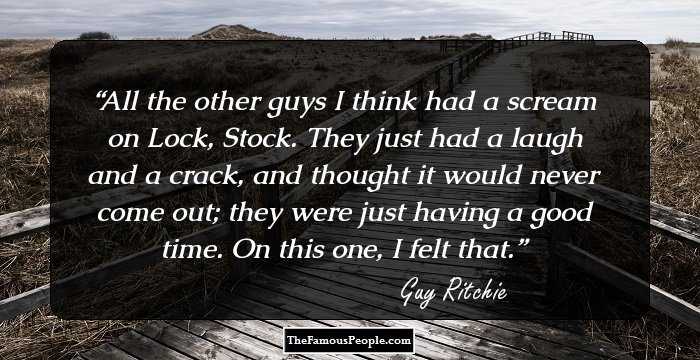 All the other guys I think had a scream on Lock, Stock. They just had a laugh and a crack, and thought it would never come out; they were just having a good time. On this one, I felt that. 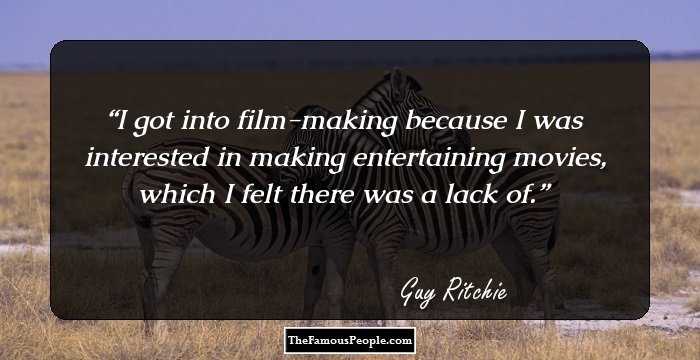 I got into film-making because I was interested in making entertaining movies, which I felt there was a lack of. 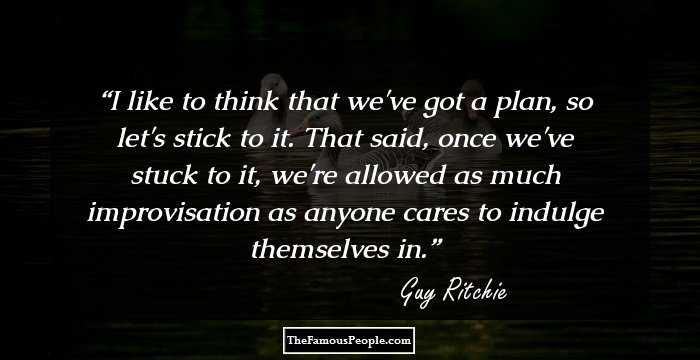 I like to think that we've got a plan, so let's stick to it. That said, once we've stuck to it, we're allowed as much improvisation as anyone cares to indulge themselves in. 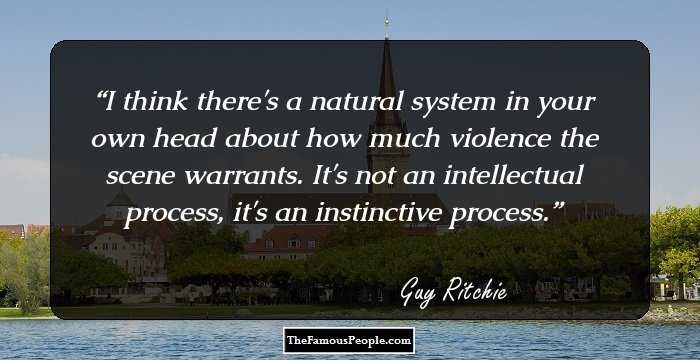 I think there's a natural system in your own head about how much violence the scene warrants. It's not an intellectual process, it's an instinctive process. 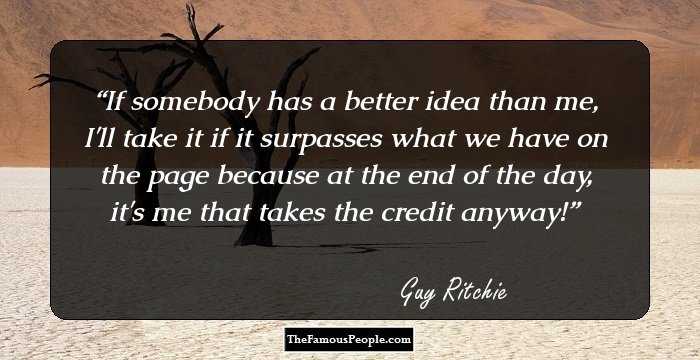 If somebody has a better idea than me, I'll take it if it surpasses what we have on the page because at the end of the day, it's me that takes the credit anyway! 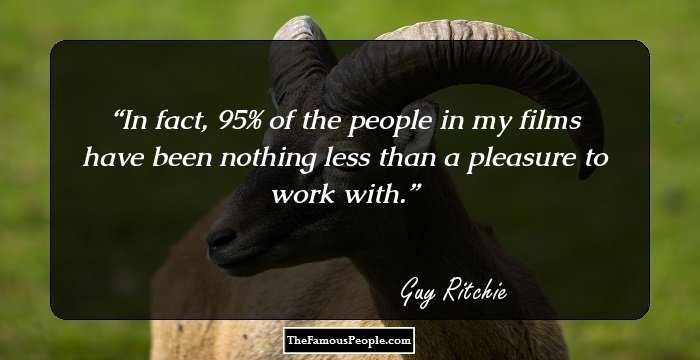 In fact, 95% of the people in my films have been nothing less than a pleasure to work with. 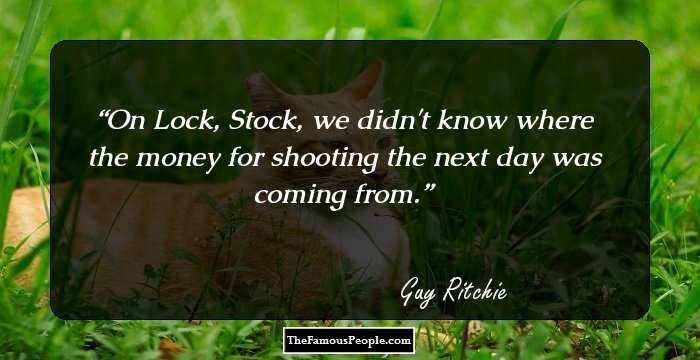 On Lock, Stock, we didn't know where the money for shooting the next day was coming from. 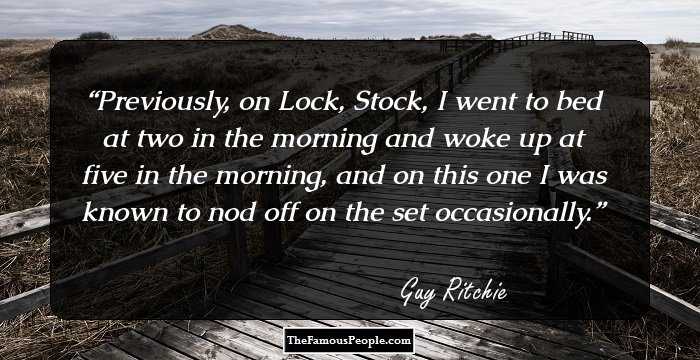 Previously, on Lock, Stock, I went to bed at two in the morning and woke up at five in the morning, and on this one I was known to nod off on the set occasionally. 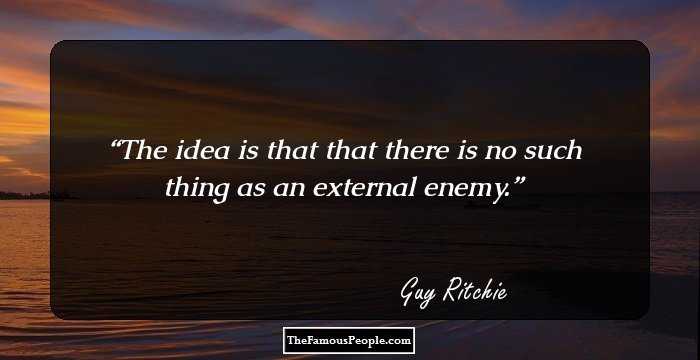 The idea is that that there is no such thing as an external enemy. 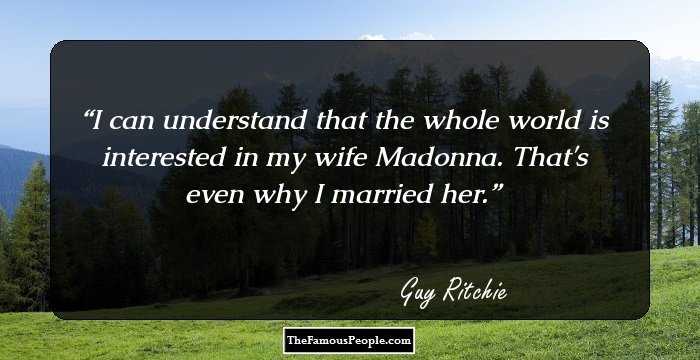 I can understand that the whole world is interested in my wife Madonna. That's even why I married her. 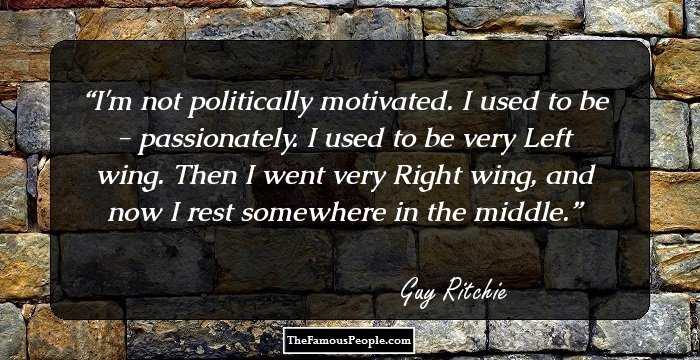 I'm not politically motivated. I used to be - passionately. I used to be very Left wing. Then I went very Right wing, and now I rest somewhere in the middle. 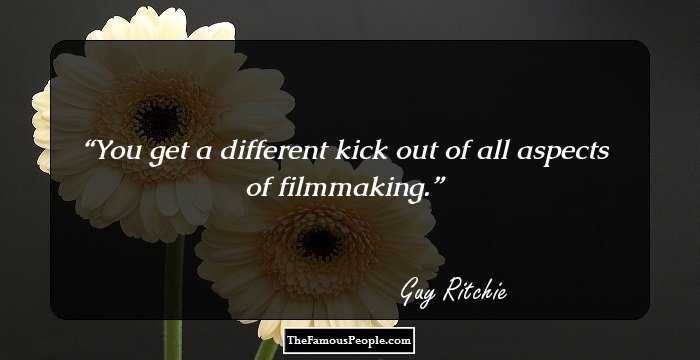 You get a different kick out of all aspects of filmmaking. 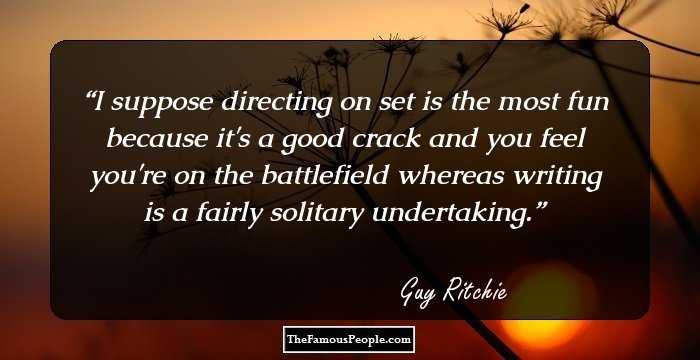 I suppose directing on set is the most fun because it's a good crack and you feel you're on the battlefield whereas writing is a fairly solitary undertaking. 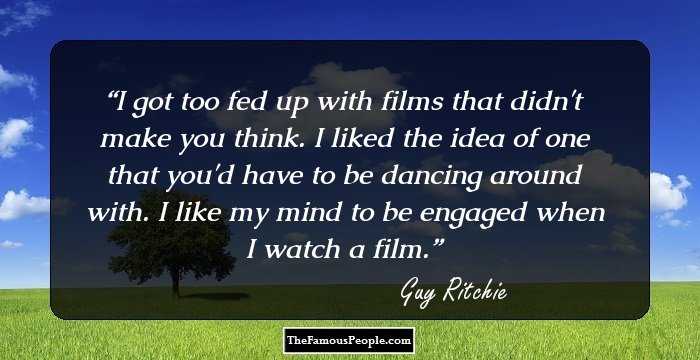 I got too fed up with films that didn't make you think. I liked the idea of one that you'd have to be dancing around with. I like my mind to be engaged when I watch a film. 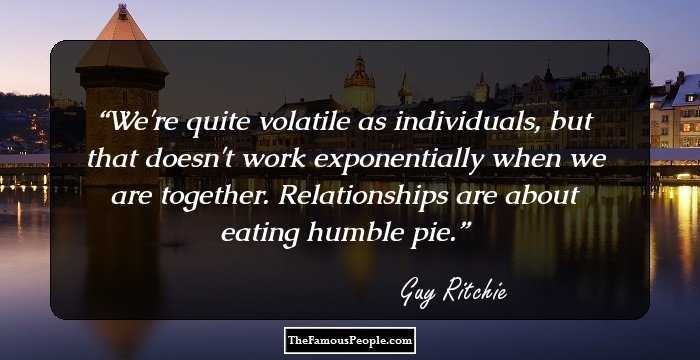 We're quite volatile as individuals, but that doesn't work exponentially when we are together. Relationships are about eating humble pie. 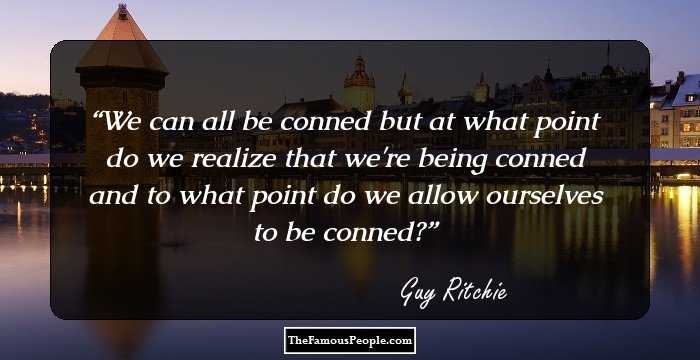 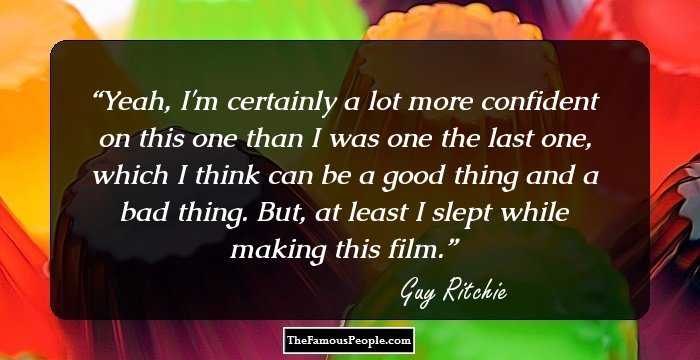 Yeah, I'm certainly a lot more confident on this one than I was one the last one, which I think can be a good thing and a bad thing. But, at least I slept while making this film. 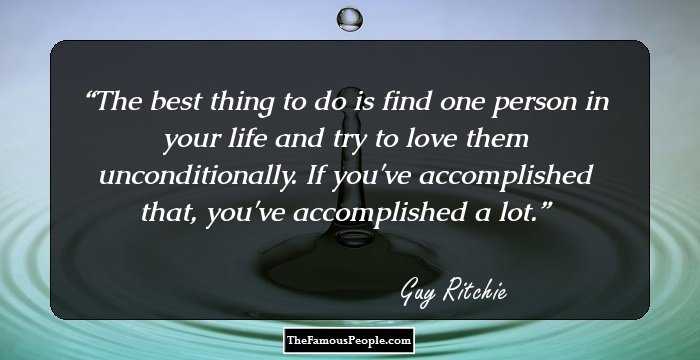 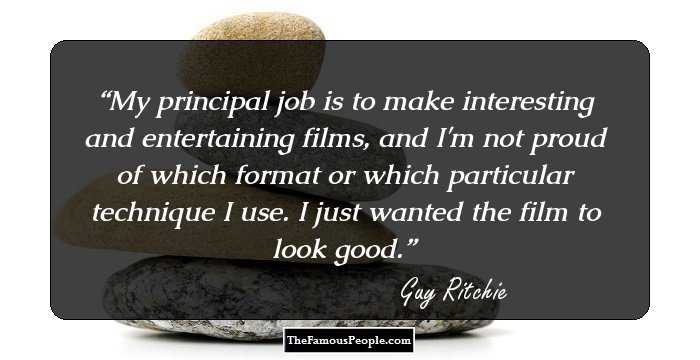 My principal job is to make interesting and entertaining films, and I'm not proud of which format or which particular technique I use. I just wanted the film to look good. 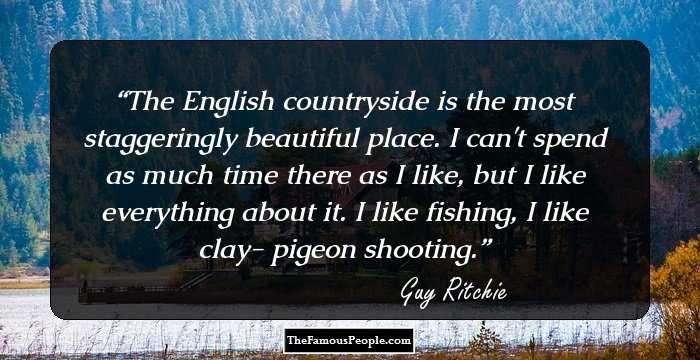 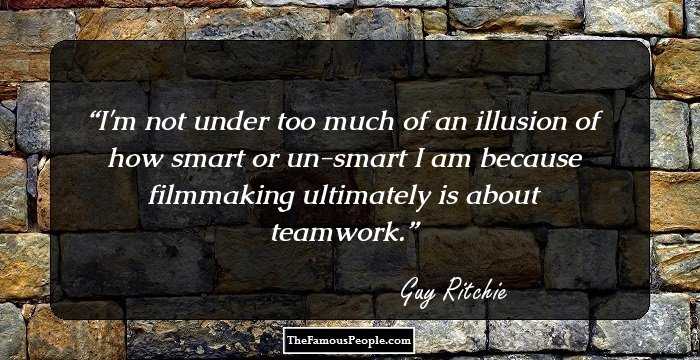 I'm not under too much of an illusion of how smart or un-smart I am because filmmaking ultimately is about teamwork.

I am not involved in any 'issues' because it's too sensitive for me - or my wife - to get involved. Every time we express an opinion it becomes a whole thing in itself. And the whole purpose of living in the countryside was to get away from hundreds of people. My wife fell off a horse, and suddenly there are hundreds of people around.

It's about not letting the internal enemy, the real enemy, have his way because the more he does the stronger he becomes. The film's about the devastating results that can manifest from the internal enemy being unbridled and allowed to unleash chaos.

Well, what I try to do is throw as much mud on the wall as I possibly can and just see what sticks, what shines as quirky or more interesting that the others, and I try to cling onto that one, somehow join a link from there to there.

They're all based on factual characters. Well, a good amount of them. That's why I was attracted to this genre anyways, because these characters are so large and cartoonish, they're like caricatures, I just felt that there had to be a film made about them.

Jake Green isn't just Jake Green. Jake represents all of us. The colour green is the central column of the spectrum and the name Jake has all sorts of numerical values. All things come back to him within the film's world of cons and games. 120 Interesting Quotes By Simon Cowell, The Man Who Is Renowned For His Zingers