Famous As: Actress
Born On: November 8, 1972
Born In: Deep River, Connecticut, United States
Age: 50 Years
Gretchen Mol is an American actress and model, best known for her role as âGillian Darmodyâ in the TV series âBoardwalk Empireâ (2010â2014). She started her acting career as a theatre artist at âSummer Stock Theatre.â Her most popular play is âThe Shape of Thingsâ (2001) in which she performed as âJennyâ and reprised the role in its film adaptation. She made her screen debut in the 1996 film âGirl 6.â She made her TV debut in an episode of the miniseries âDead Man's Walk.â She played important roles in shows such as âLife on Marsâ (2008-09), âMozart in the Jungleâ (2015), âChanceâ (2016), and âNightflyersâ (2018). She also worked in a several films, including âThe Thirteenth Floorâ (1999), âThe Notorious Bettie Pageâ (2005), and âManchester by the Seaâ (2016). Here is a compilation ofÂ Gretchen Mol quotes on energy, opinion, people, children, character, worry, etc.
Listed In:
Film & Theater Personalities
Actresses 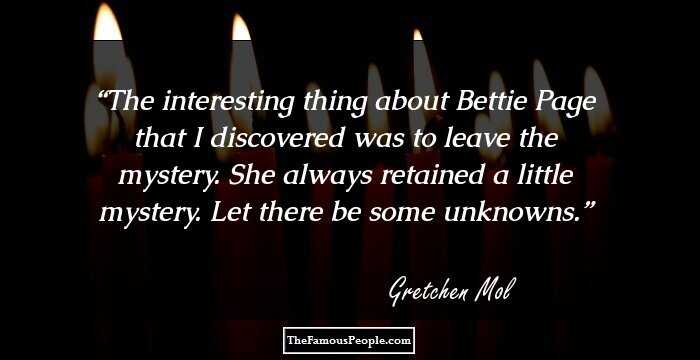 The interesting thing about Bettie Page that I discovered was to leave the mystery. She always retained a little mystery. Let there be some unknowns. 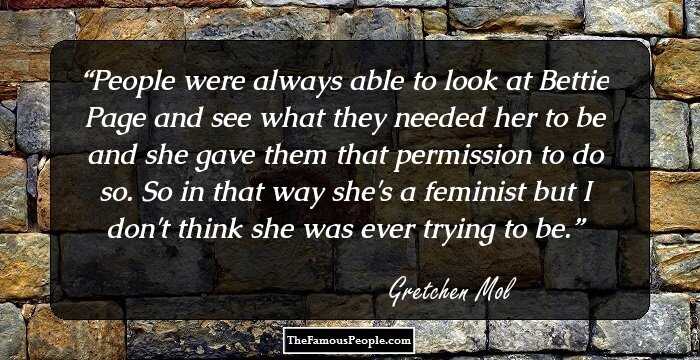 People were always able to look at Bettie Page and see what they needed her to be and she gave them that permission to do so. So in that way she's a feminist but I don't think she was ever trying to be. 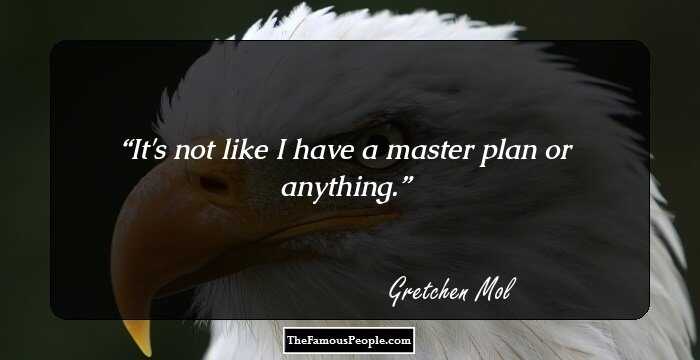 It's not like I have a master plan or anything. 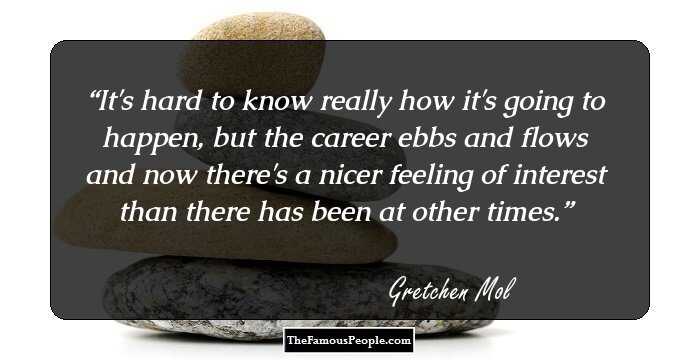 It's hard to know really how it's going to happen, but the career ebbs and flows and now there's a nicer feeling of interest than there has been at other times. 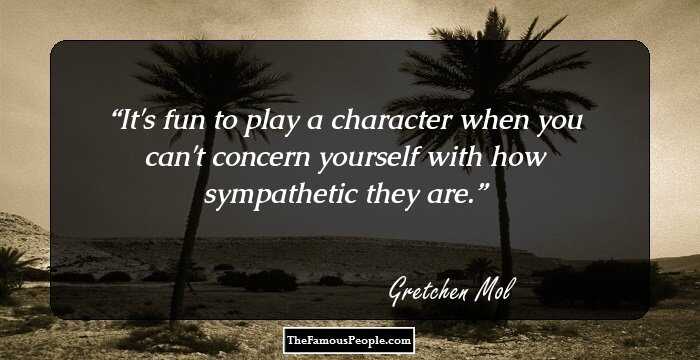 It's fun to play a character when you can't concern yourself with how sympathetic they are. 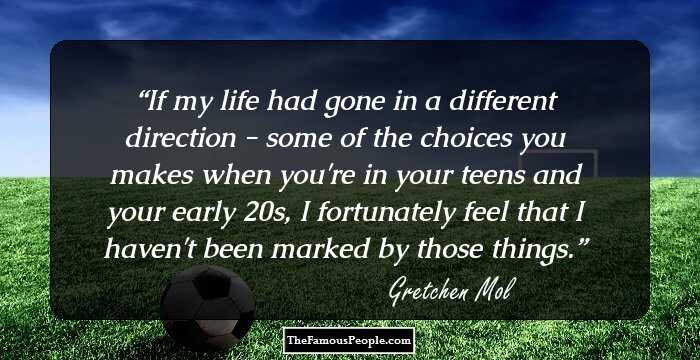 If my life had gone in a different direction - some of the choices you makes when you're in your teens and your early 20s, I fortunately feel that I haven't been marked by those things. 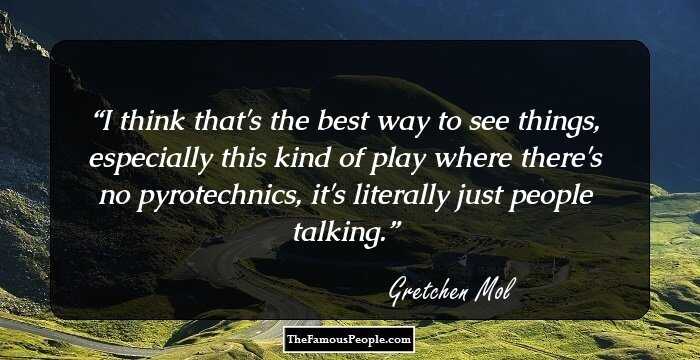 I think that's the best way to see things, especially this kind of play where there's no pyrotechnics, it's literally just people talking. 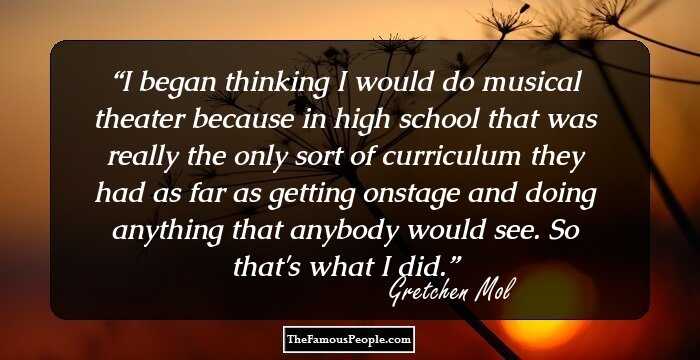 I began thinking I would do musical theater because in high school that was really the only sort of curriculum they had as far as getting onstage and doing anything that anybody would see. So that's what I did. 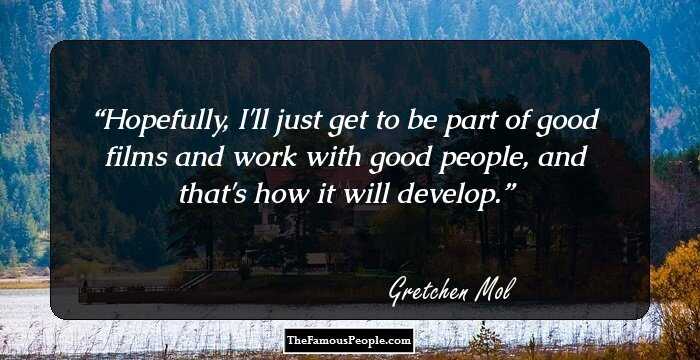 Hopefully, I'll just get to be part of good films and work with good people, and that's how it will develop. 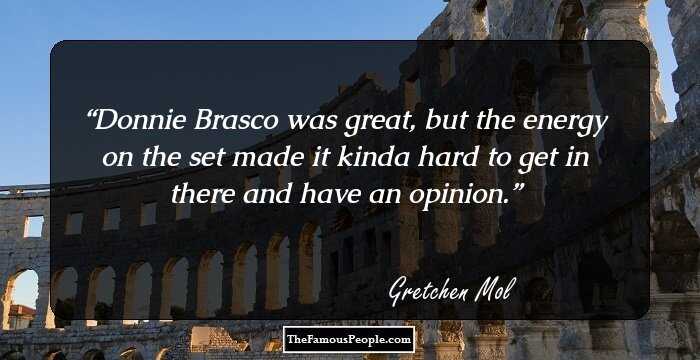 Donnie Brasco was great, but the energy on the set made it kinda hard to get in there and have an opinion.

I focused on where she was from of course, her voice and her history, her relationship with God - her religion. This was probably the strongest relationship she has had, really. She never seemed to maintain close relationships with husbands.

I'm pretty low-maintenance, but I like my time to myself, and once you have a child, you have to fight for it. I remember the first long bath I took [after Ptolemy's birth] was such a moment. Because a lot of the time you're in the shower, and if that baby cries, you've got to turn off the water and go!

In a way I'd say it's maybe more satisfying to do a play, because there is a beginning, middle, and end. But I also really enjoy the television experience, because there's a certain part of it that you have to let go of and trust in that process.

The first people that have the information are the hair and makeup ladies and the wardrobe people, because they often have to plan out the clothes: the things that are gonna get bloody, and the different kinds of gunshot wounds they're gonna have to do. They often have more of a preparation, more time, than we do. You can definitely feel on set the actors trying to get that information, and they're of sworn to secrecy.

The process with the play, obviously, it belongs to you by the time you're stepping on stage in front of that audience for the first time. You can change it by just a look or things you're not even conscious of, but it's such a full immersion.

The thing about being a parent it puts priorities in order. Thank God, you're not totally focused on yourself anymore. You get to put your energy out, as opposed to worrying all the time about your own stuff. It's such a relief, but when you think about it, it's like an extension of you. It's like a safer way; you feel less indulgent about it, but they are extensions of yourself, and I think you're freer to love them so unconditionally. That, we're not able to do with our own selves.