Famous As: Italian Politician, Activist and Champion of the Movement for Italian Unity
Born On: June 22, 1805
Died On: March 10, 1872
Born In: Genoa, Italy
Died At Age: 66
Giuseppe Mazzini was an Italian politician, propagandist, journalist, activist , and revolutionary, who worked for the unification of Italy. It was largely due to his efforts that brought about an independent and unified Italy, which till then was divided into several separate states, dominated by foreign powers. He was also intrumental in helping the modern European movement for democracy in a republican state and his thoughts and beliefs had a deep influence on the Italian and European republican movements. His thoughts also influenced the Constitution of Italy, and many politicians of a later period, including Woodrow Wilson and David Lloyd George, Gandhi, Savarkar, David Ben-Gurion, Golda Meir, Sun Yat-sen, and Jawaharlal Nehru. We have compiled some interesting quotes byÂ Giuseppe Mazzini on nation, democracy, unification, republicanism, Italy, life, God, nationalism, education, duties, country, truth, inspiration, ideas, honour, mother, etc.
Listed In:
Activists
Leaders 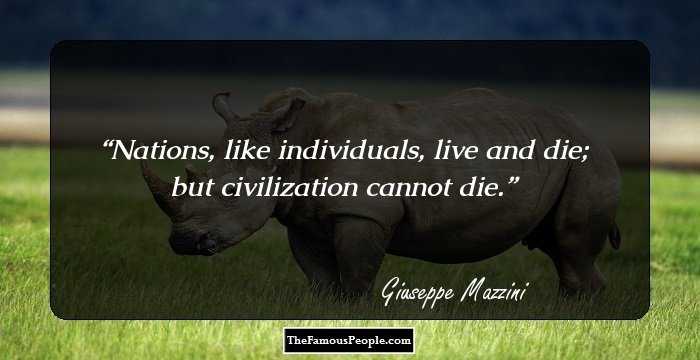 Nations, like individuals, live and die; but civilization cannot die.

The Family is the Country of the heart. There is an angel in the Family who, by the mysterious influence of grace, of sweetness, and of love, renders the fulfillment of duties less wearisome, sorrows less bitter. The only pure joys unmixed with sadness which it is given to man to taste upon earth are, thanks to this angel, the joys of the Family. 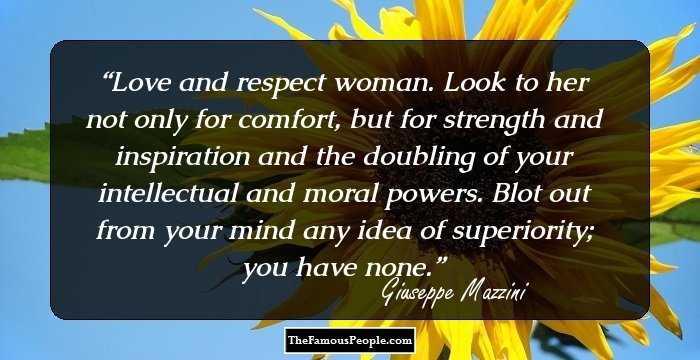 Love and respect woman. Look to her not only for comfort, but for strength and inspiration and the doubling of your intellectual and moral powers. Blot out from your mind any idea of superiority; you have none. 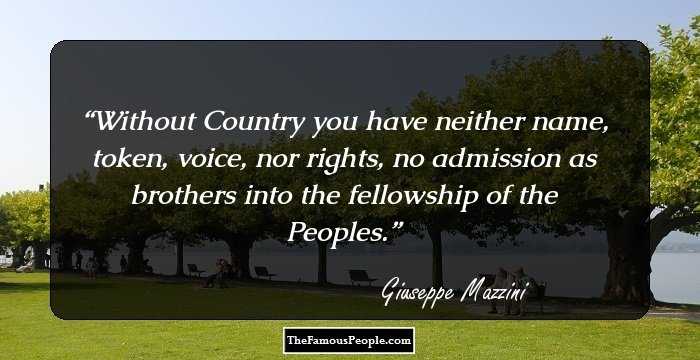 Without Country you have neither name, token, voice, nor rights, no admission as brothers into the fellowship of the Peoples.

Love your country. Your country is the land where your parents sleep, where is spoken that language in which the chosen of your heart, blushing, whispered the first word of love; it is the home that God has given you that by striving to perfect yourselves therein you may prepare to ascend to him.

The mother's first kiss teaches the child love; the first holy kiss of the woman he loves teaches man hope and faith in life; and love and faith create a desire for perfection and the power of reaching towards it step by step; create the future, in short, of which the living symbol is the child, link between us and the generations to come. 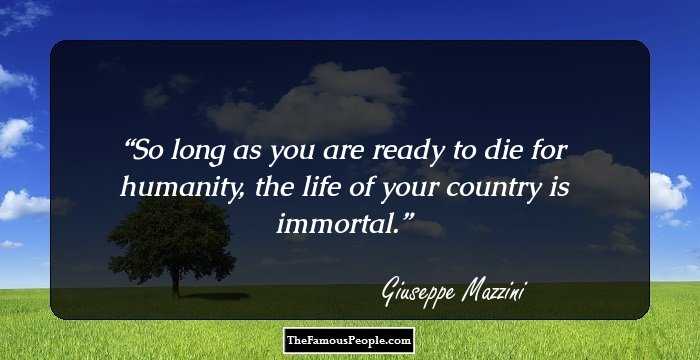 So long as you are ready to die for humanity, the life of your country is immortal. 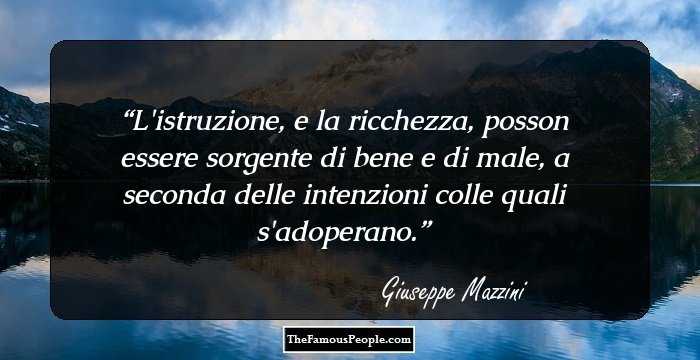 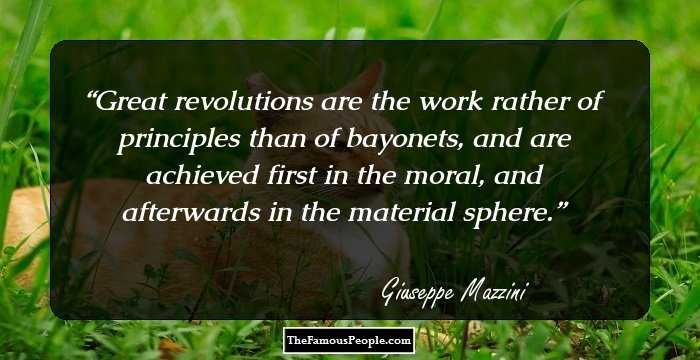 Great revolutions are the work rather of principles than of bayonets, and are achieved first in the moral, and afterwards in the material sphere.

We form an association of brothers in all points of the globe ... yet there is one unseen that can hardly be felt, yet it weighs on us. Whence comes it? Where is it? No one knows ... or at least no one tells. This association is secret even to us the veterans of the Secret Societies. 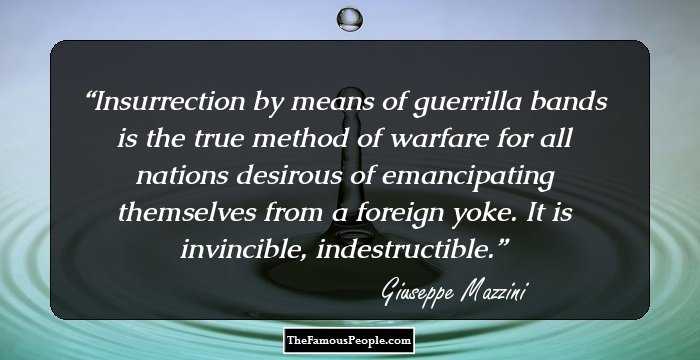 Insurrection by means of guerrilla bands is the true method of warfare for all nations desirous of emancipating themselves from a foreign yoke. It is invincible, indestructible. 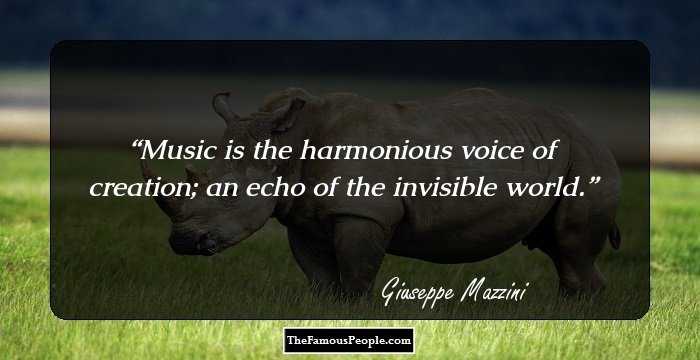 Music is the harmonious voice of creation; an echo of the invisible world. 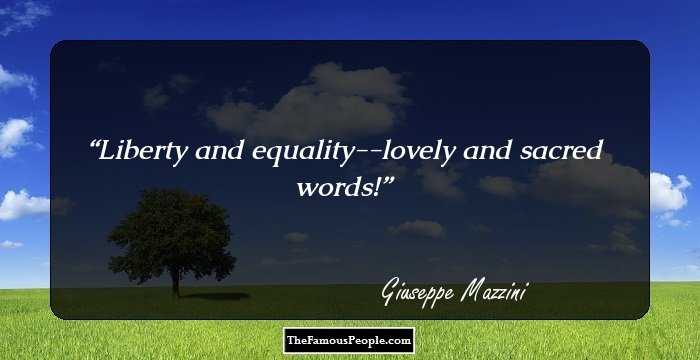 Liberty and equality--lovely and sacred words! 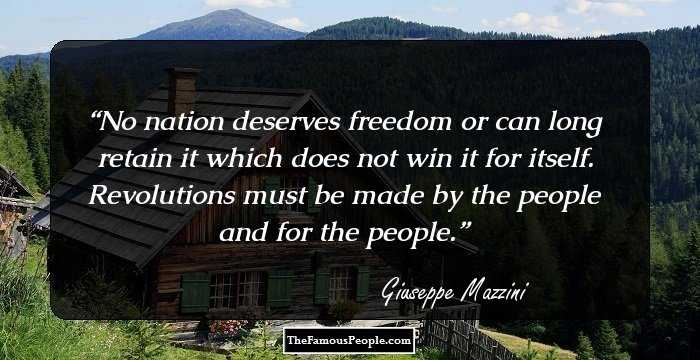 No nation deserves freedom or can long retain it which does not win it for itself. Revolutions must be made by the people and for the people. 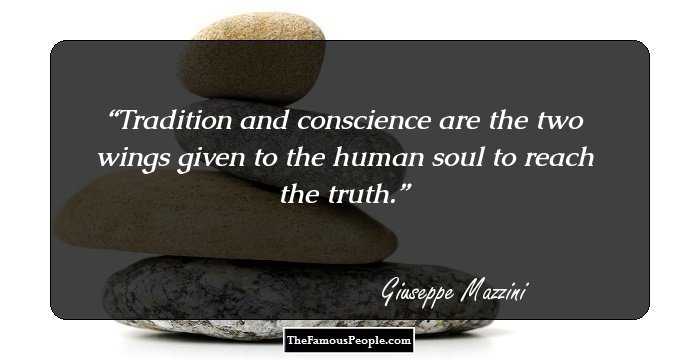 Tradition and conscience are the two wings given to the human soul to reach the truth.

A Country is not a mere territory; the particular territory is only its foundation. The Country is the idea which rises upon that foundation; it is the sentiment of love, the sense of fellowship which binds together all the sons of that territory.

O my Brothers! love your Country. Our Country is our home, the home which God has given us, placing therein a numerous family which we love and are loved by, and with which we have a more intimate and quicker communion of feeling and thought than with others; a family which by its concentration upon a given spot, and by the homogeneous nature of its elements, is destined for a special kind of activity. 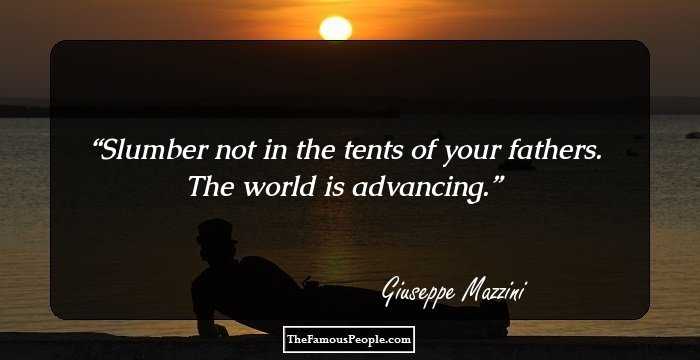 Slumber not in the tents of your fathers. The world is advancing. 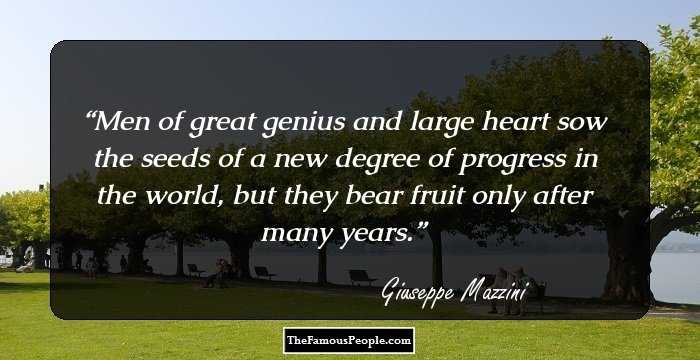 Men of great genius and large heart sow the seeds of a new degree of progress in the world, but they bear fruit only after many years. 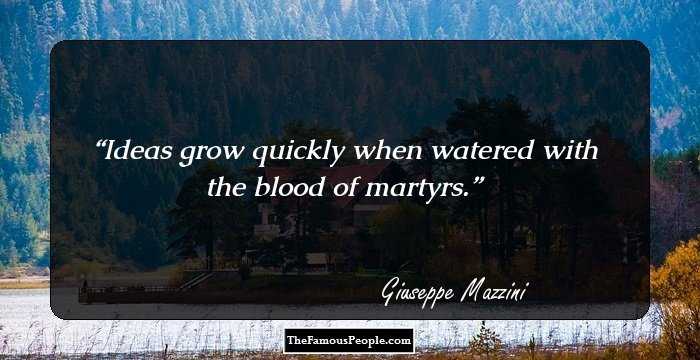 Ideas grow quickly when watered with the blood of martyrs. 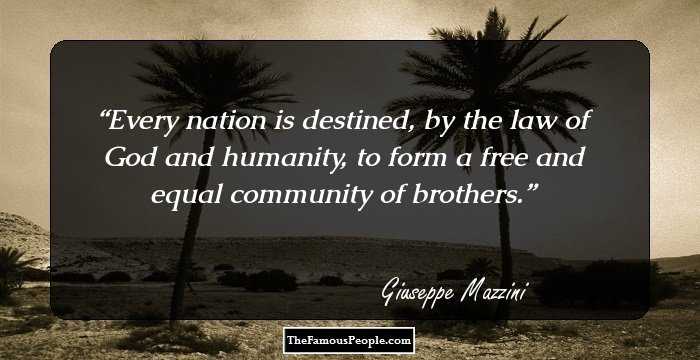 Every nation is destined, by the law of God and humanity, to form a free and equal community of brothers. 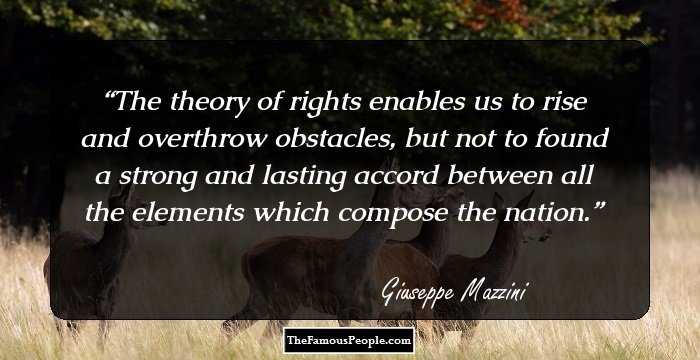 The theory of rights enables us to rise and overthrow obstacles, but not to found a strong and lasting accord between all the elements which compose the nation. 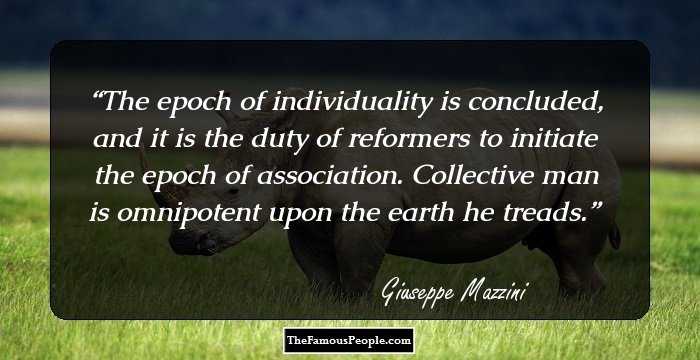 The epoch of individuality is concluded, and it is the duty of reformers to initiate the epoch of association. Collective man is omnipotent upon the earth he treads. 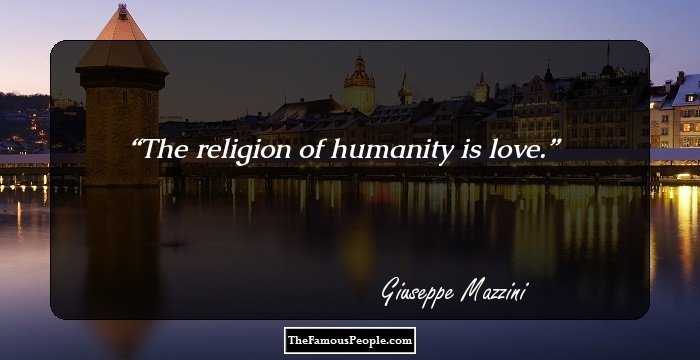 The religion of humanity is love. 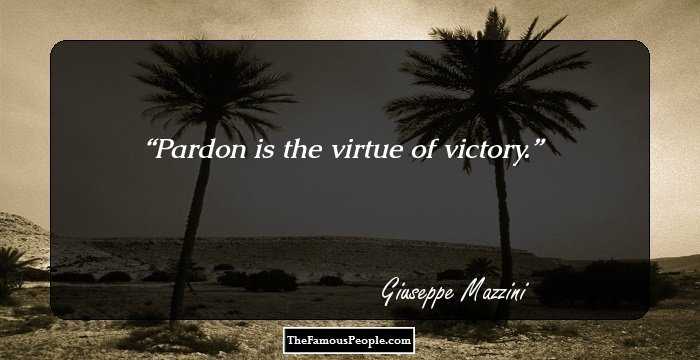 Pardon is the virtue of victory. 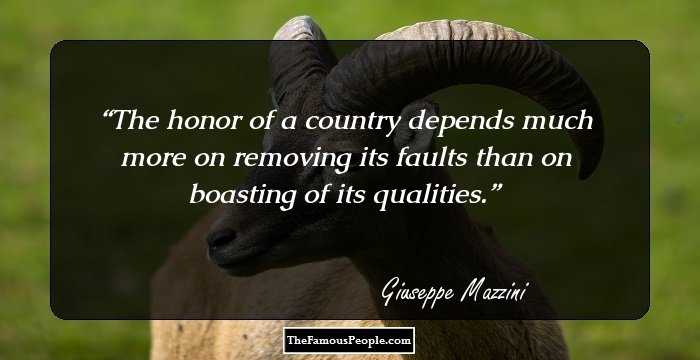 The honor of a country depends much more on removing its faults than on boasting of its qualities. 240 Notable Quotes By Bernie Sanders That You Can Count On