Famous As: Actor
Born On: March 31, 1971
Born In: Perth, Scotland
Age: 51 Years
Ewan McGregor is an acclaimed Scottish actor known for his roles in the âStar Wars Prequel Trilogyâ. He was interested in acting since an early age and enrolled in the âGuildhall School of Music and Dramaâ to further sharpen his talent. He debuted in his acting career with a significant role in a musical comedy titled âLipstick on Your Collarâ which also brought him roles in a couple of television mini-series. This was followed by his first notable role in âShallow Graveâ which was appreciated by the masses and was honored with various awards. This fame and popularity paved his path to the big screen where he debuted with âTrainspottingâ which marked the beginning of his successful career. He further went on to play prominent roles in various successful movies including âStar Wars Episode I: The Phantom Menaceâ. During this period he even proved his mettle in theaters as well as television shows to enhance his reputation as an actor. This encouraged him to become the co-owner of the production company called âNatural Nylonâ. He has been honored with a couple of awards including the BAFTA Awards for his role in âTrainspottingâ. Here is a compilation of quotes and thoughts by the renowned actor which has been excerpted from his work, life, thought, dialogues and interviews. Read on the most famous and quoted sayings and quotes by Ewan McGregor.
Listed In:
Actors
Film & Theater Personalities 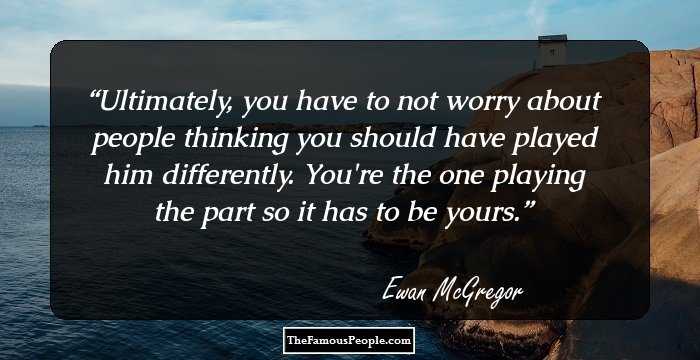 Ultimately, you have to not worry about people thinking you should have played him differently. You're the one playing the part so it has to be yours. 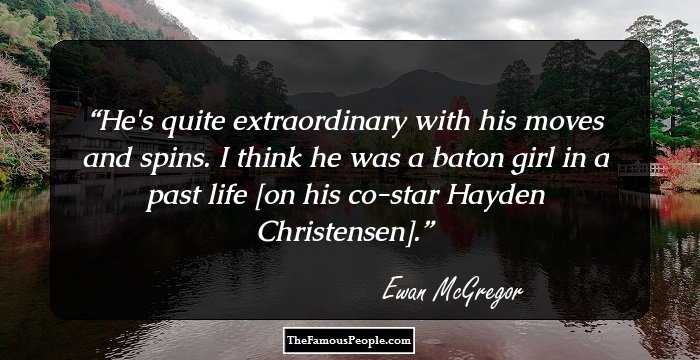 He`s quite extraordinary with his moves and spins. I think he was a baton girl in a past life [on his co-star Hayden Christensen].

Life Think Past I
Ewan McGregor 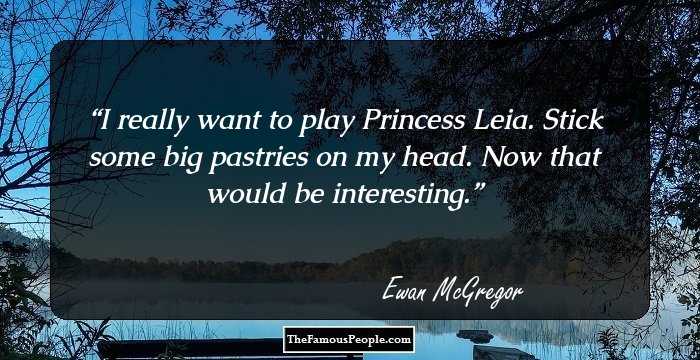 I really want to play Princess Leia. Stick some big pastries on my head. Now that would be interesting. 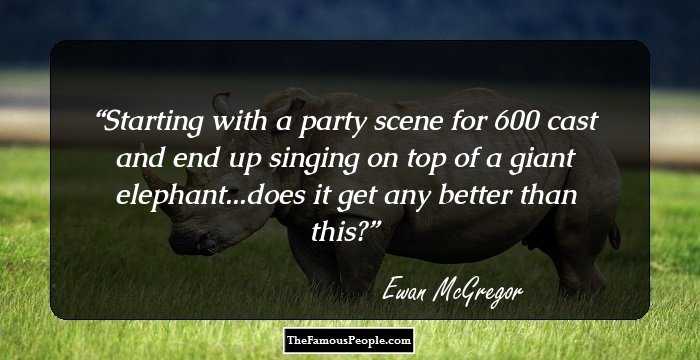 Starting with a party scene for 600 cast and end up singing on top of a giant elephant...does it get any better than this? 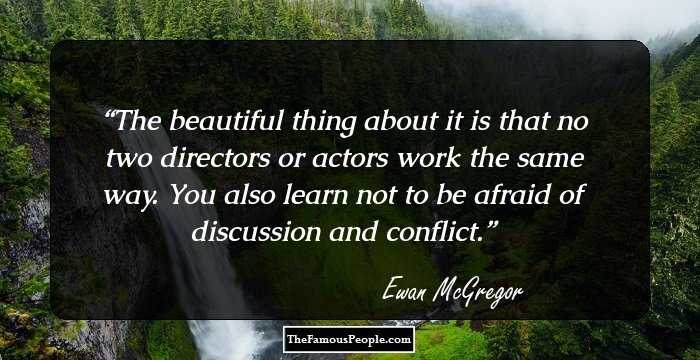 The beautiful thing about it is that no two directors or actors work the same way. You also learn not to be afraid of discussion and conflict. 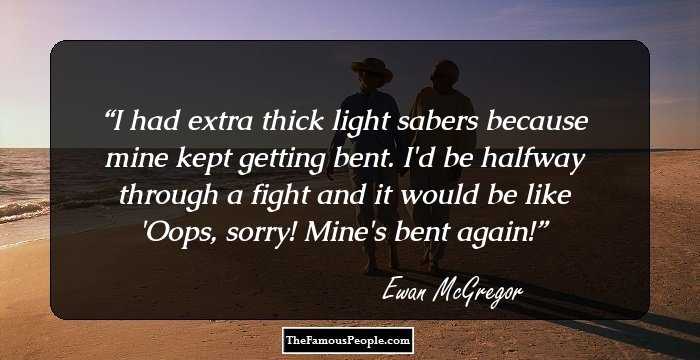 I had extra thick light sabers because mine kept getting bent. I'd be halfway through a fight and it would be like 'Oops, sorry! Mine's bent again! 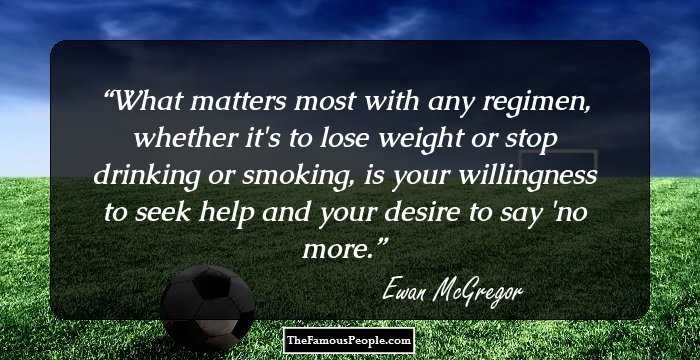 What matters most with any regimen, whether it's to lose weight or stop drinking or smoking, is your willingness to seek help and your desire to say 'no more. 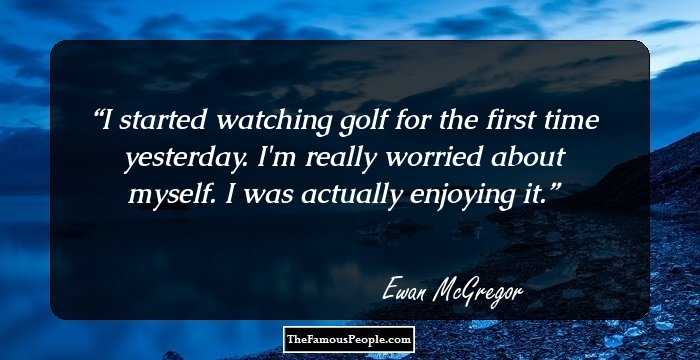 I started watching golf for the first time yesterday. I`m really worried about myself. I was actually enjoying it. 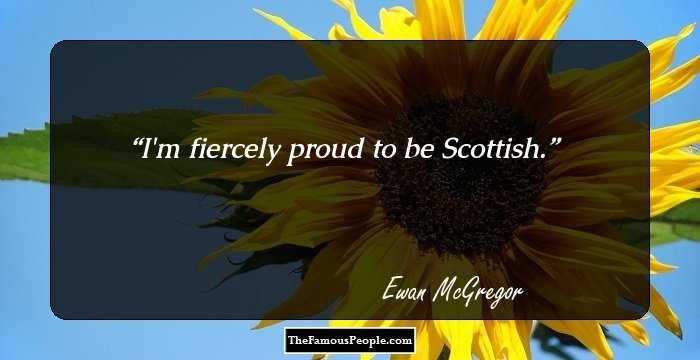 I'm fiercely proud to be Scottish. 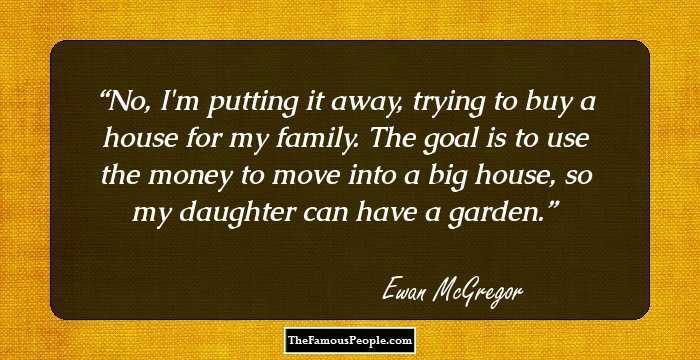 No, I`m putting it away, trying to buy a house for my family. The goal is to use the money to move into a big house, so my daughter can have a garden. 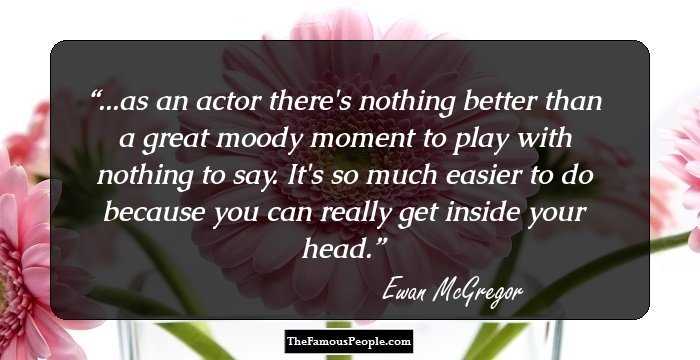 ...as an actor there`s nothing better than a great moody moment to play with nothing to say. It`s so much easier to do because you can really get inside your head. 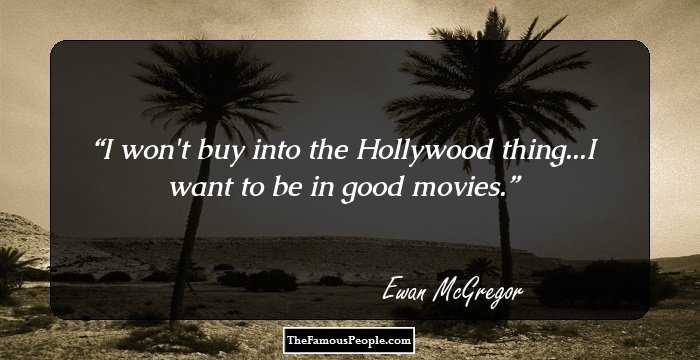 I won`t buy into the Hollywood thing...I want to be in good movies. 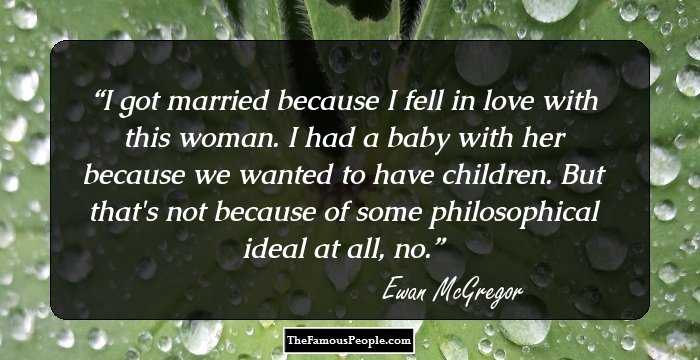 I got married because I fell in love with this woman. I had a baby with her because we wanted to have children. But that's not because of some philosophical ideal at all, no.