Famous As: American Astronomer Who is Regarded as the Leading Observational Cosmologist of the 20th Century
Born On: November 20, 1889
Died On: September 28, 1953
Born In: Marshfield, Missouri, United States
Died At Age: 63
Edwin Powell Hubble was a distinguished American astronomer who played a pivotal role in establishing the fields of observational cosmology and extragalactic astronomy. Hubble is considered to be one of the most important and greatest astronomers of all time. His researches, thoughts and discoveries also included the objects that were previously considered to be the clouds of dust and gases, but were in reality galaxies beyond the âMilky Wayâ. The âHubble Space Telescopeâ was named in his honour and a model of the same was prominently exhibited in his hometown. We have rounded some famous, popular, inspiring and motivating quotes and sayings by Edwin Powell Hubble which have been excerpted from his writings, thoughts, researches, discoveries, works and life. Read through the quotes and thoughts by Edwin Powell Hubble which are till date quoted widely.
Listed In:
Scientists 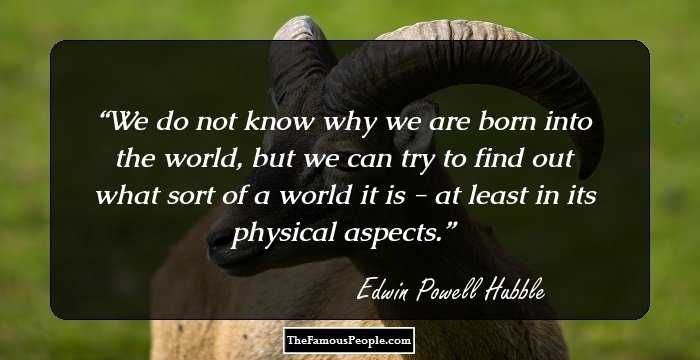 We do not know why we are born into the world, but we can try to find out what sort of a world it is - at least in its physical aspects. 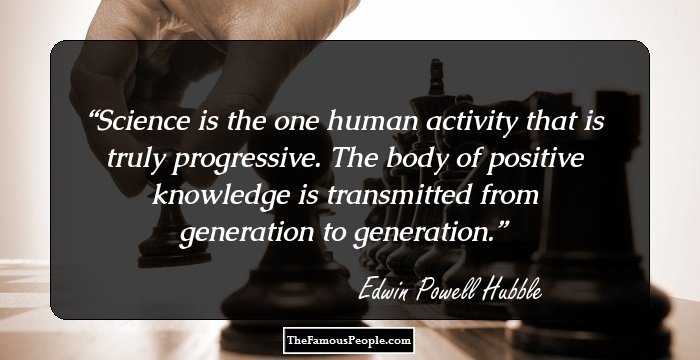 Science is the one human activity that is truly progressive. The body of positive knowledge is transmitted from generation to generation. 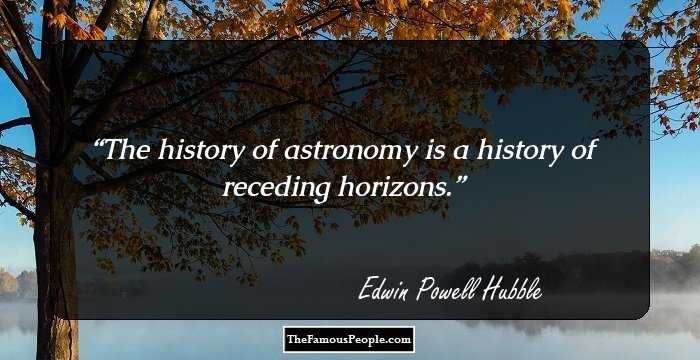 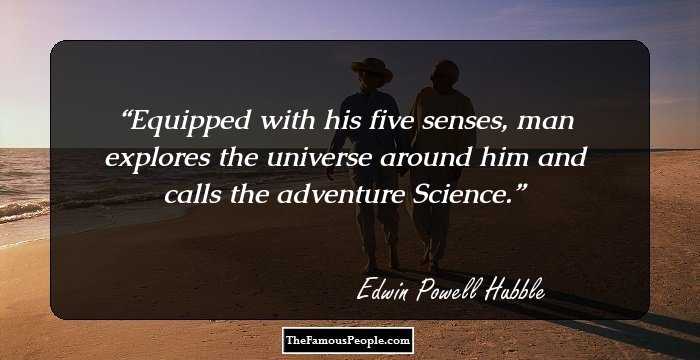 Equipped with his five senses, man explores the universe around him and calls the adventure Science. 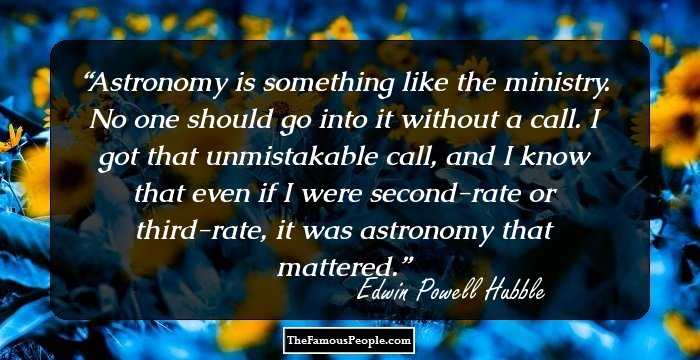 Astronomy is something like the ministry. No one should go into it without a call. I got that unmistakable call, and I know that even if I were second-rate or third-rate, it was astronomy that mattered. 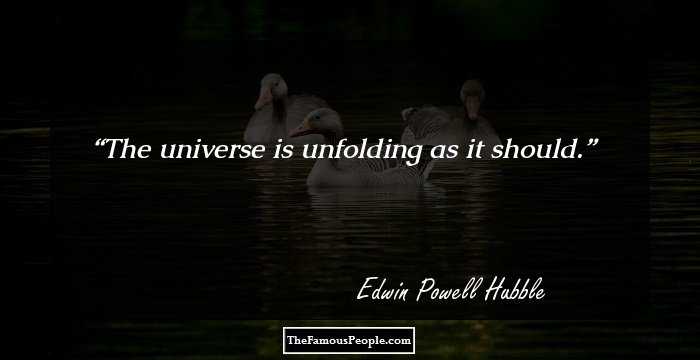 The universe is unfolding as it should. 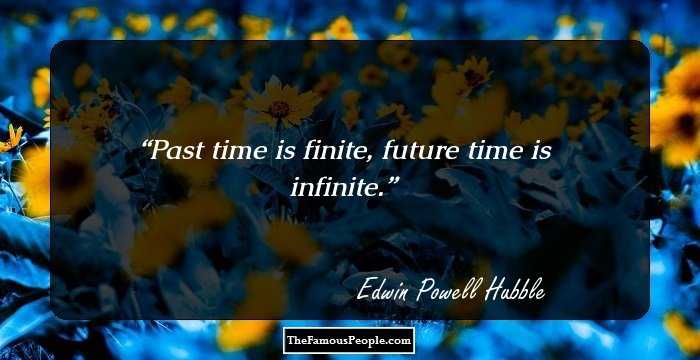 Past time is finite, future time is infinite. 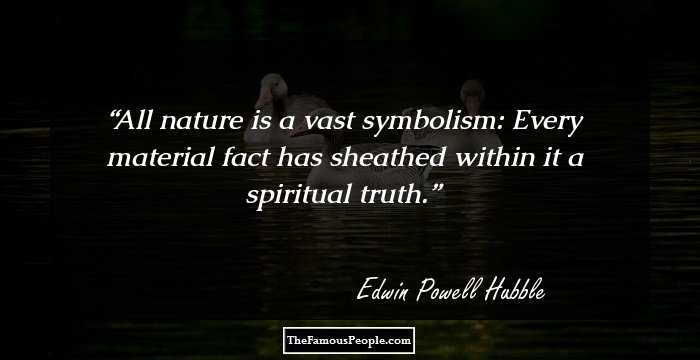 All nature is a vast symbolism: Every material fact has sheathed within it a spiritual truth. 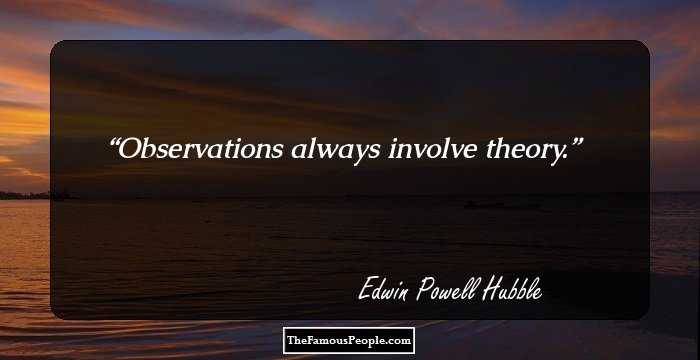 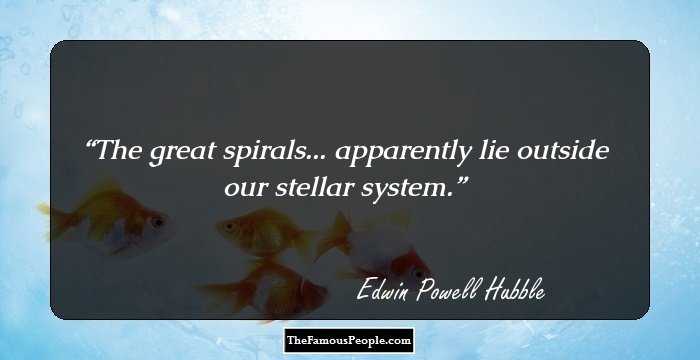 The great spirals... apparently lie outside our stellar system. 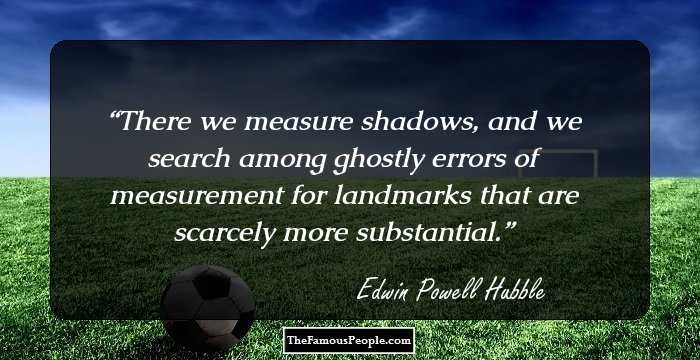 There we measure shadows, and we search among ghostly errors of measurement for landmarks that are scarcely more substantial.

The outstanding feature, however, is the possibility that the velocity-distance relation may represent the de Sitter effect, and hence that numerical data may be introduced into discussions of the general curvature of space. 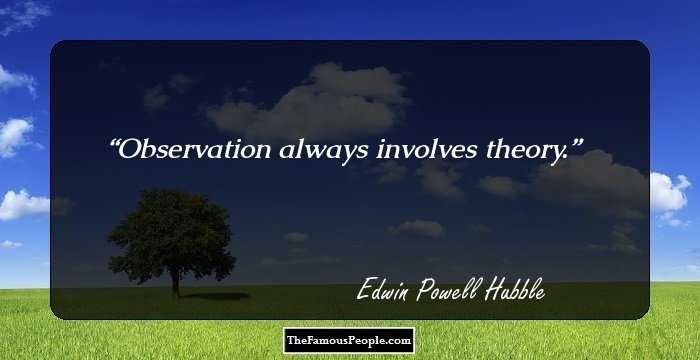 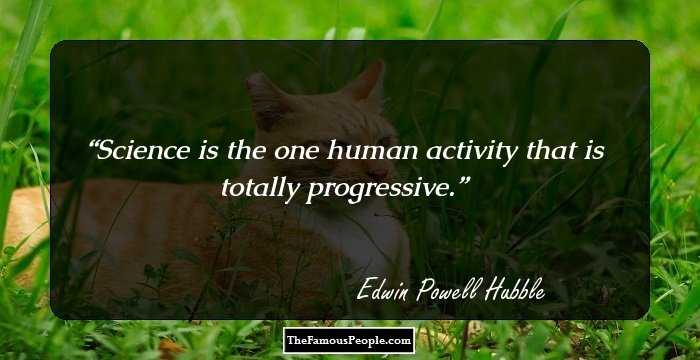 Science is the one human activity that is totally progressive. 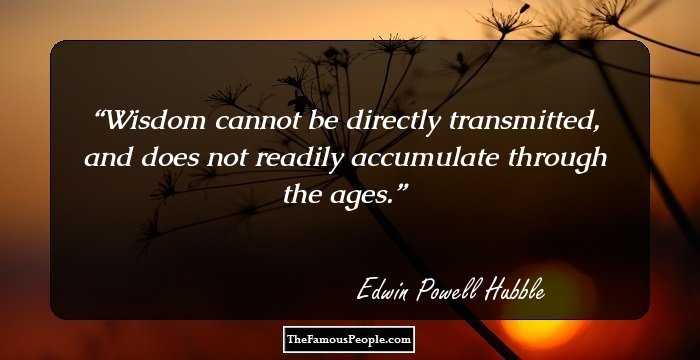 Wisdom cannot be directly transmitted, and does not readily accumulate through the ages. 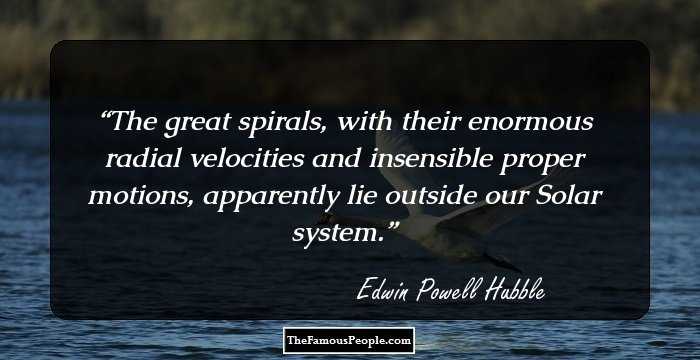 The great spirals, with their enormous radial velocities and insensible proper motions, apparently lie outside our Solar system. 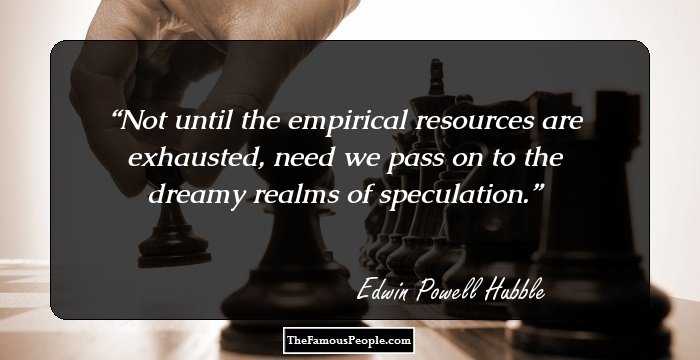 Not until the empirical resources are exhausted, need we pass on to the dreamy realms of speculation. 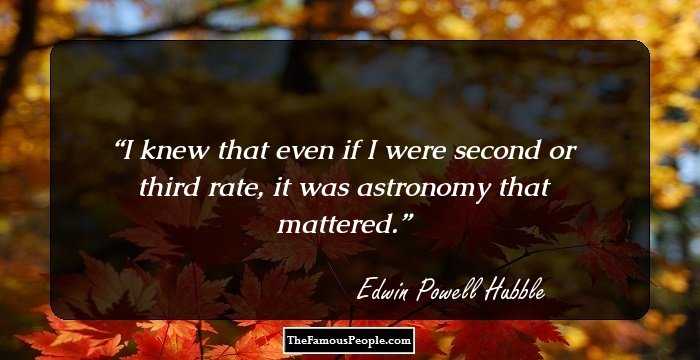 I knew that even if I were second or third rate, it was astronomy that mattered.

Equipped with our five senses - along with telescopes and microscopes and mass spectrometers and seismographs and magnetometers and particle accelerators and detectors sensitive to the entire electromagnetic spectrum - we explore the universe around us and call the adventure science.

A scientist naturally and inevitably ... mulls over the data and guesses at a solution. He proceeds to testing of the guess by new data-predicting the consequences of the guess and then dispassionately inquiring whether or not the predictions are verified.

With increasing distance, our knowledge fades, and fades rapidly. Eventually, we reach the dim boundary-the utmost limits of our telescopes. There, we measure shadows, and we search among ghostly errors of measurement for landmarks that are scarcely more substantial. The search will continue. Not until the empirical resources are exhausted, need we pass on to the dreamy realms of speculation.

At the last dim horizon, we search among ghostly errors of observations for landmarks that are scarcely more substantial. The search will continue. The urge is older than history. It is not satisfied and it will not be oppressed. 19 Notable Quotes By George Washington Carver, The Father of Chemurgy