Born Eric Lynn Wright, distinguished by his stage name Easy-E, was a celebrated American rapper who performed solo and in the hip-hop group âN.W.Aâ. His fans fondly called him âThe Godfather Of Gangsta Rapâ. He was definitely ahead of comparison. He was loved for his raw sex appeal, unique style of delivery and over-the-top lyrics. Coming from an impoverished family in Crompton, Easy-E nurtured the dream of becoming famous and rich. During his mid-teens he dropped out of school and flourished notoriously in the drug business. He earned a lot of money through his illegal deeds and then decided to embark upon a more respectable career as a rapper. Soon he formed a partnership with his friend âJerry Hellerâ and formed âRuthless Recordsâ. He was going up the ladder of fame swiftly when he was diagnosed with AIDS that gulped his life at the age of 31. Following are some popular thoughts and quotes by Easy-E. Go through the quotes and sayings by Easy-E that will give you a glimpse of his mind. 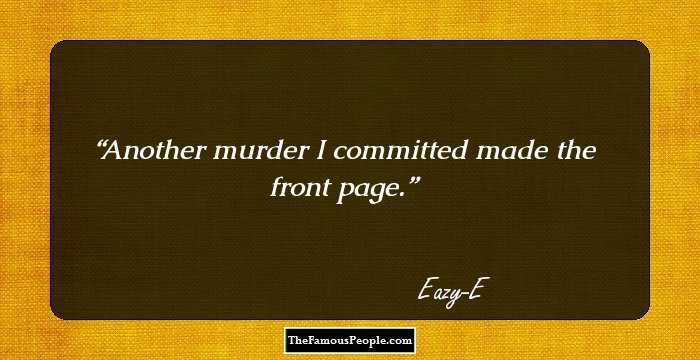 Another murder I committed made the front page. 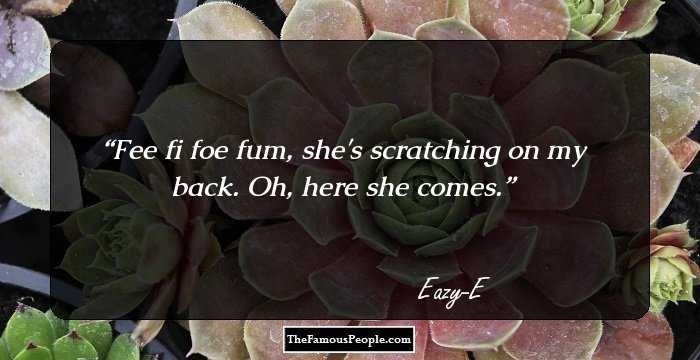 Fee fi foe fum, she's scratching on my back. Oh, here she comes. 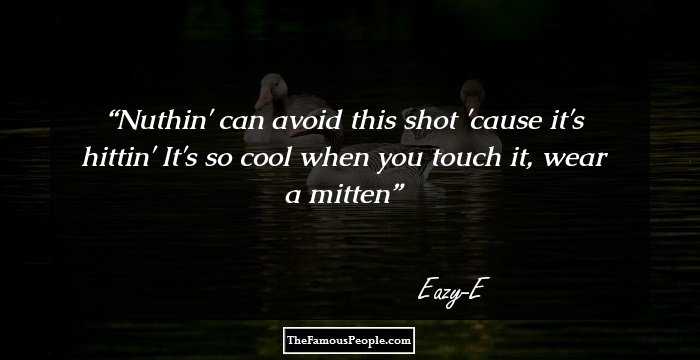 Nuthin' can avoid this shot 'cause it's hittin' It's so cool when you touch it, wear a mitten 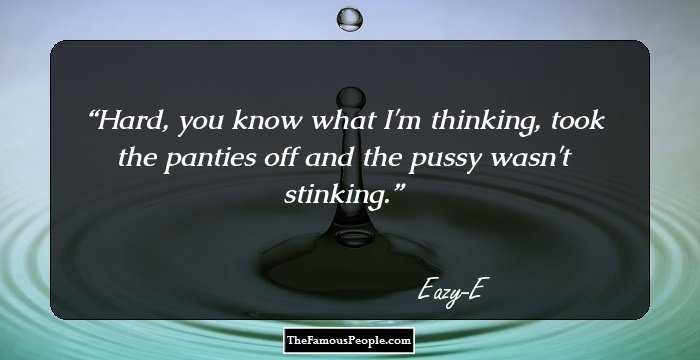 Hard, you know what I'm thinking, took the panties off and the pussy wasn't stinking. 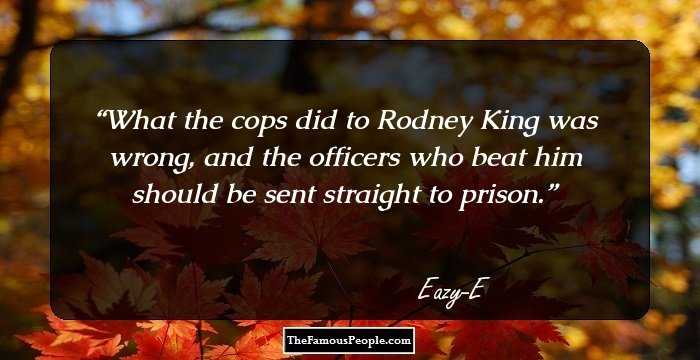 What the cops did to Rodney King was wrong, and the officers who beat him should be sent straight to prison. 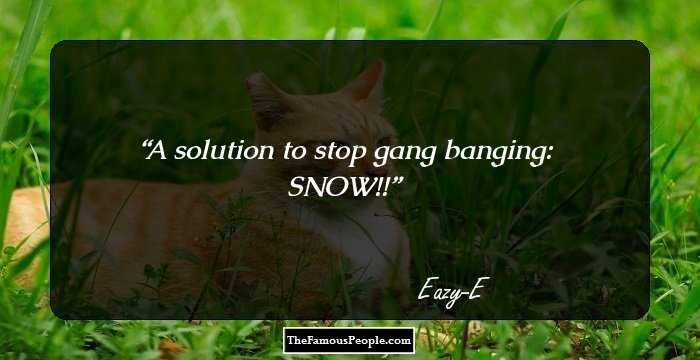 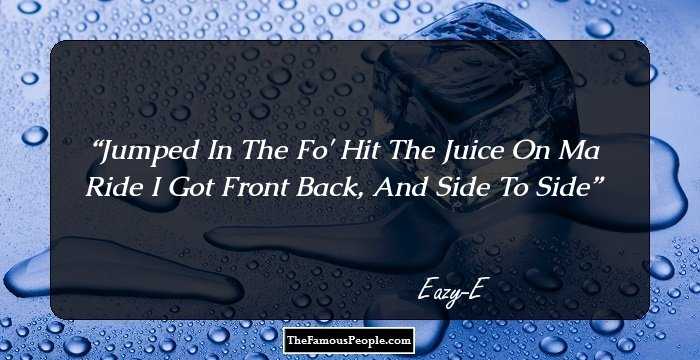 Jumped In The Fo' Hit The Juice On Ma Ride I Got Front Back, And Side To Side 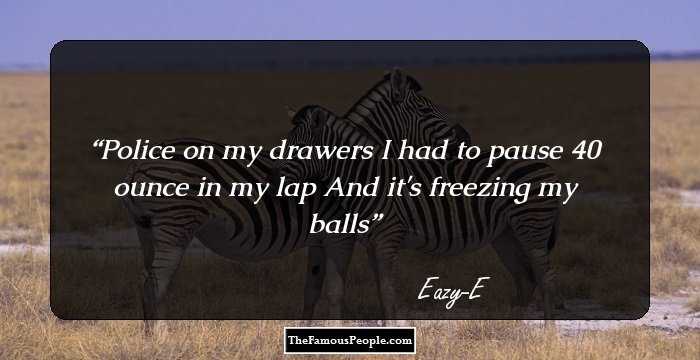 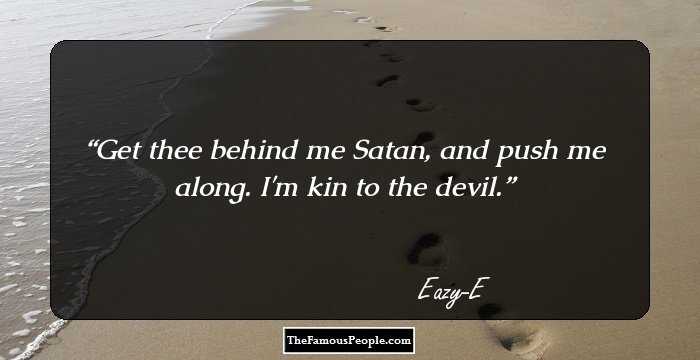 Get thee behind me Satan, and push me along. I'm kin to the devil. 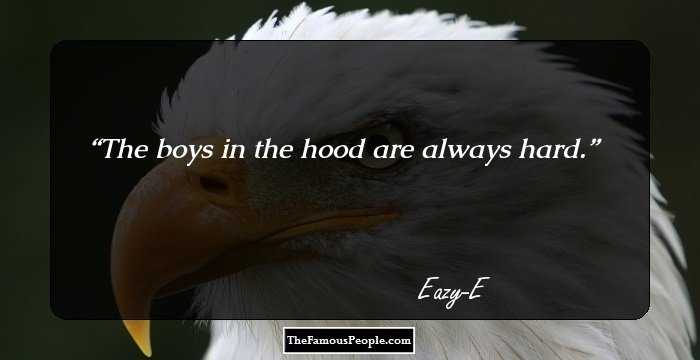 The boys in the hood are always hard. 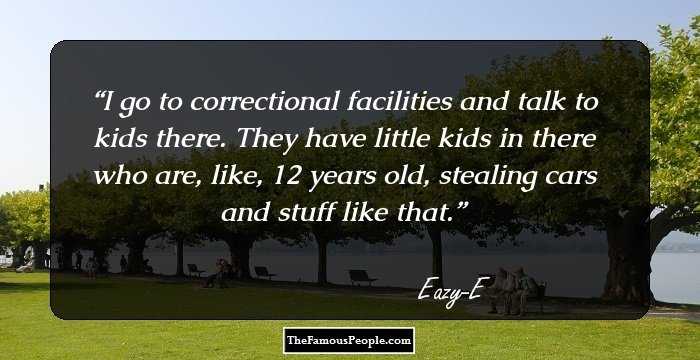 I go to correctional facilities and talk to kids there. They have little kids in there who are, like, 12 years old, stealing cars and stuff like that. 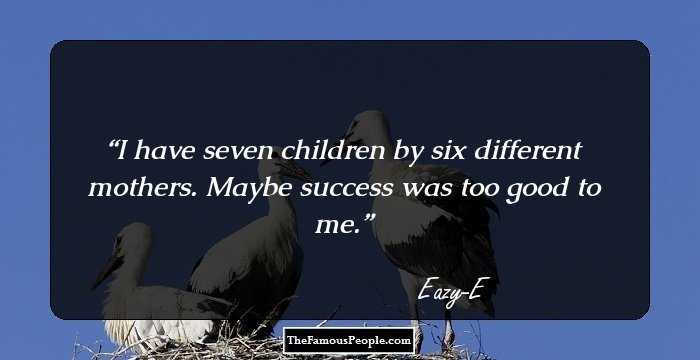 I have seven children by six different mothers. Maybe success was too good to me.

Me Children I
Eazy E 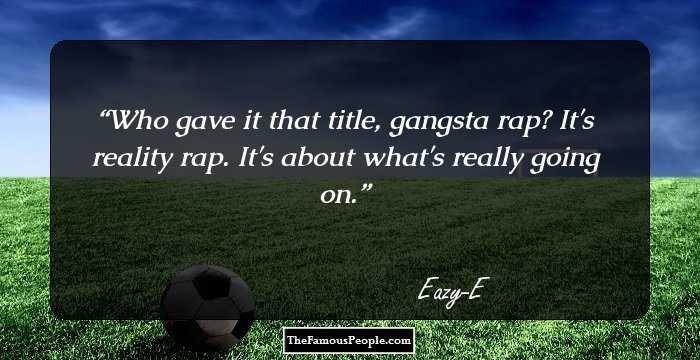 Who gave it that title, gangsta rap? It's reality rap. It's about what's really going on. 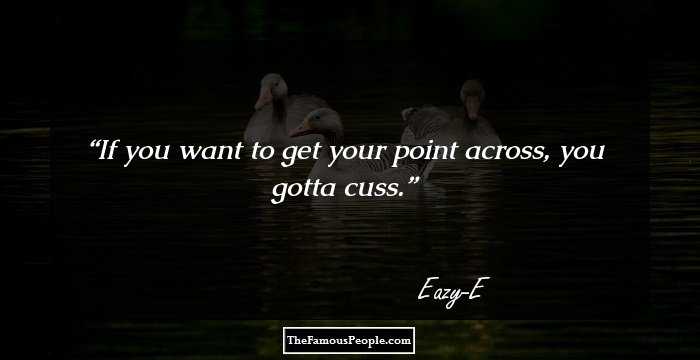 If you want to get your point across, you gotta cuss.

The kids from the streets don't want preaching or messages. They want what they can identify with. They want to hear about the reality of their situation, not fairy tales. They don't care if it's ugly; they just want reality.

Why do you think the fans like us - why they prefer our street raps over all that phony stuff out there? Because we're telling the real story of what it's like living in places like Compton. We're giving them reality. We're like reporters. We give them the truth. 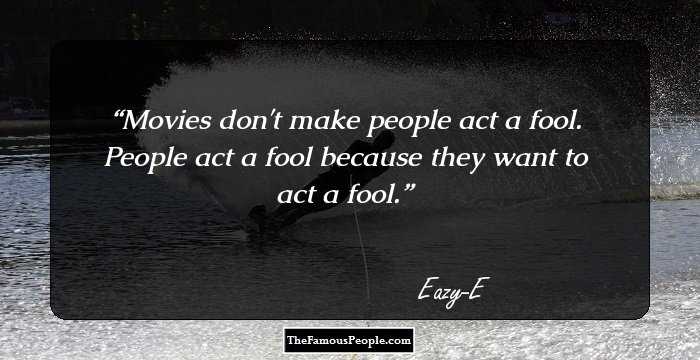 Yeah, I was a brother on the streets of Compton doing a lot of things most people look down on but it did pay off. Then we started rapping about real stuff that shook up the LAPD and the FBI. But we got our message across big time, and everyone in America started paying attention to the boys in the hood.

I'm not saying this because I'm looking for a soft cushion wherever I'm heading, I just feel that I've got thousands and thousands of young fans that have to learn about what's real when it comes to AIDS. Like the others before me, I would like to turn my own problem into something good that will reach out to all my homeboys and their kin. Because I want to save their asses before it's too late. 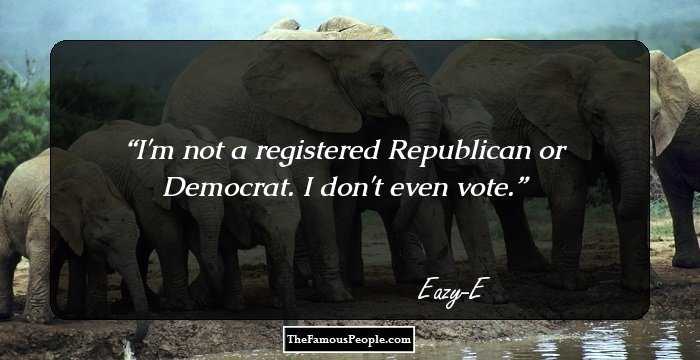 I'm not a registered Republican or Democrat. I don't even vote. 91 Insightful Quotes By Michael Franti For A Lyrical Day 26 Great Quotes By Cole Porter For Your Perfect Romantic Evening 48 Famous Quotes By Bobby Brown That Will Widen Your Horizon