Famous As: Talk Show Host
Born On: November 3, 1953
Born In: Pittsburgh, Pennsylvania, United States
Age: 69 Years
Dennis Miller is an acclaimed American comedian, actor and talk-show host known for his prolific humor skills. During the initial days of his career he did stand-ups in many local clubs and his skills fascinated the famous producer Lorne Michaels. He offered him a significant role in his popular show âSaturday Night Liveâ where he was appreciated and it turned out to be a major breakthrough in his career. He got instant fame due to his comic skill and played his character successfully for the next six seasons. He further went on to host âThe Dennis Miller Showâ but his show was unsuccessful and was soon went off the air. He further co-produced and hosted his own show called âDennis Miller Liveâ, which turned out to be a great success and brought him a couple of 'Emmy Awardsâ. Miller is a multi-faceted person and he has been successful in various other fields apart from comedy. He worked as a sports commentator for a popular sports television series titled "Monday Night Footballâ. He has also worked in some successful movies like âDisclosure in 1994â and âThe Netâ and has even produced a movie titled âTales From the Crypt Presents: Bordello of Bloodâ. His continues to entertain his audience with his shows, comic timing, work, thoughts, writings and movies. We have collected his popular quotes from hiw shows, films and life. Presenting a collection of quotations and sayings by Dennis Miller which will give you your share of gaiety.
Listed In:
Actors
Film & Theater Personalities
Comedians
Media Personalities 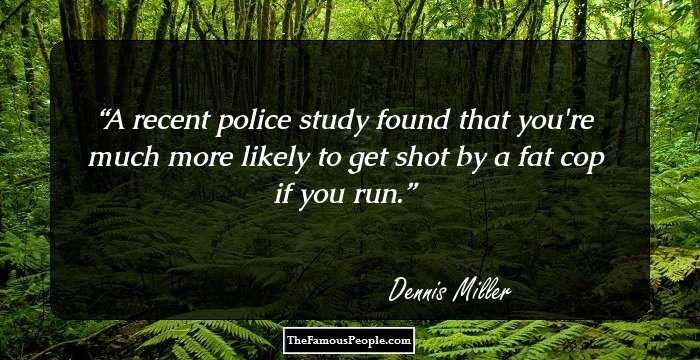 A recent police study found that you're much more likely to get shot by a fat cop if you run. 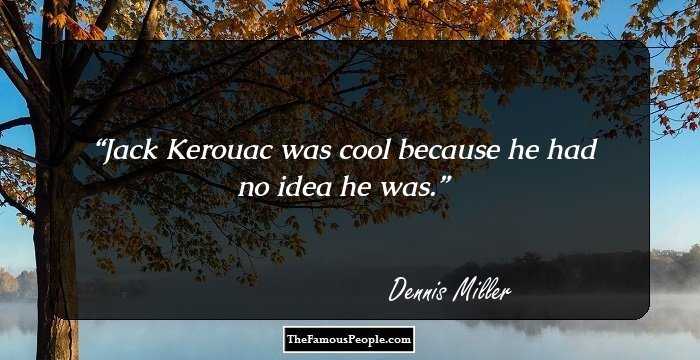 Jack Kerouac was cool because he had no idea he was. 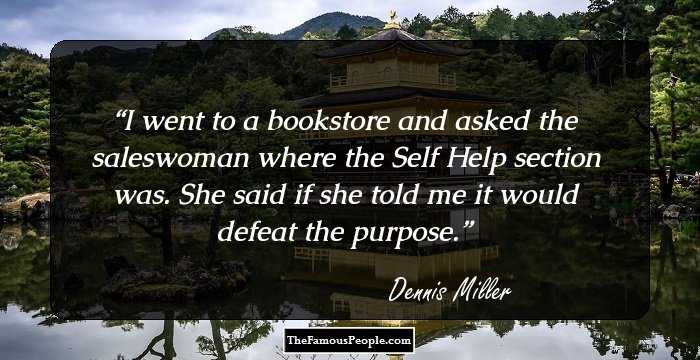 I went to a bookstore and asked the saleswoman where the Self Help section was. She said if she told me it would defeat the purpose.

Me I
Dennis Miller 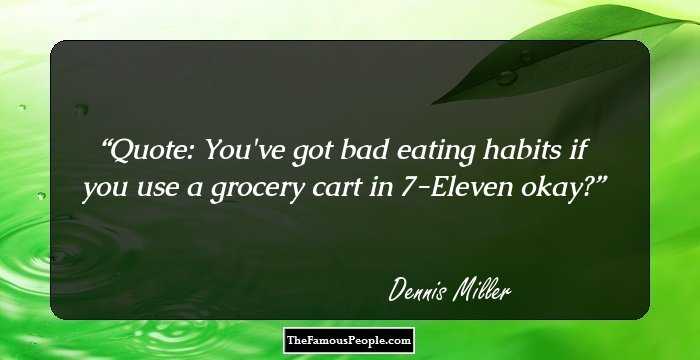 Quote: You've got bad eating habits if you use a grocery cart in 7-Eleven okay? 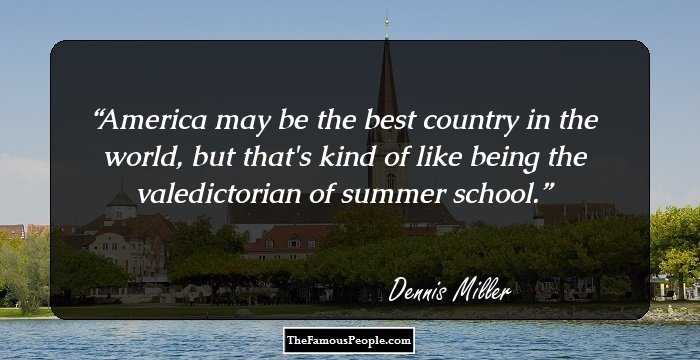 America may be the best country in the world, but that's kind of like being the valedictorian of summer school. 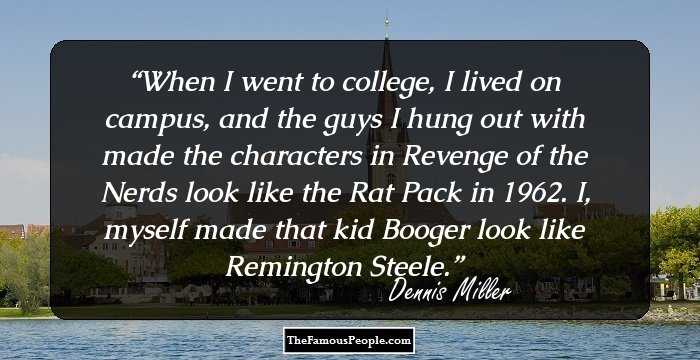 When I went to college, I lived on campus, and the guys I hung out with made the characters in Revenge of the Nerds look like the Rat Pack in 1962. I, myself made that kid Booger look like Remington Steele. 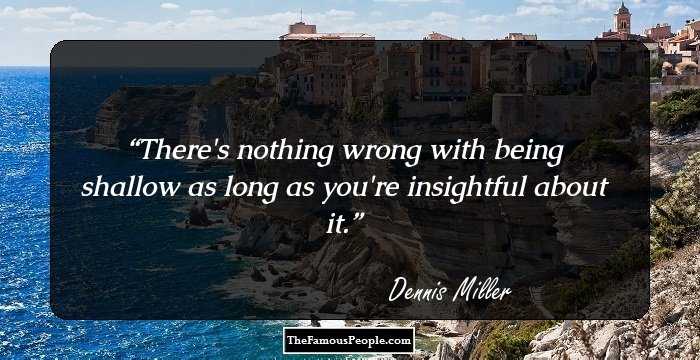 There's nothing wrong with being shallow as long as you're insightful about it. 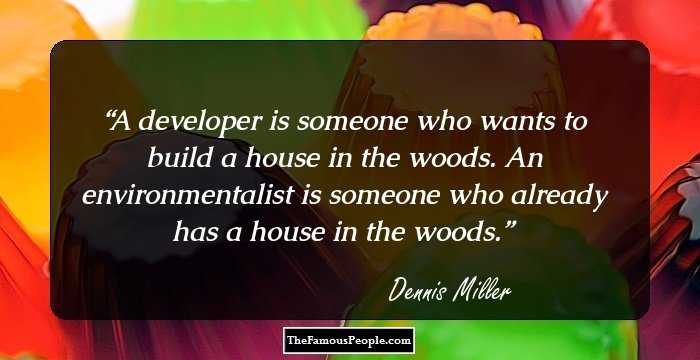 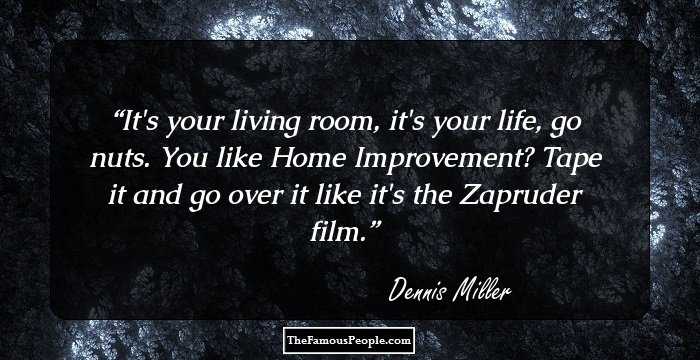 It's your living room, it's your life, go nuts. You like Home Improvement? Tape it and go over it like it's the Zapruder film. 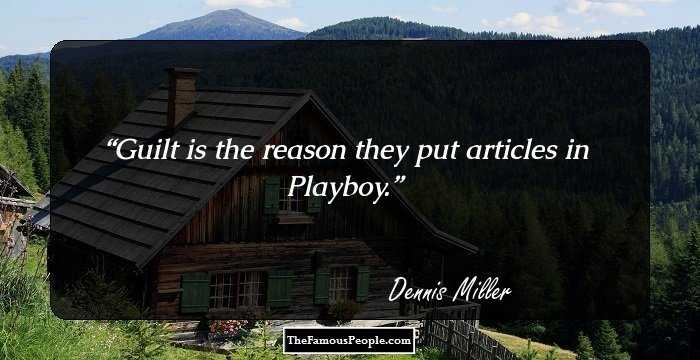 Guilt is the reason they put articles in Playboy. 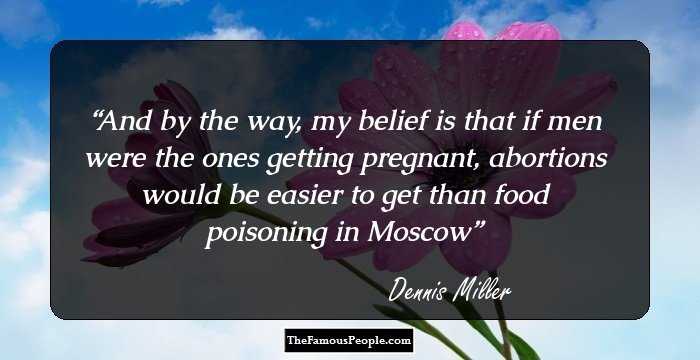 And by the way, my belief is that if men were the ones getting pregnant, abortions would be easier to get than food poisoning in Moscow 65 Motivational Quotes By Don Cheadle That You Can Count On