A collection of quotes and sayings by Charles Perrault on in Cinderella, cupid, love, fairy-tales, marriage, fiction, humorous, Italian, country, and stories. 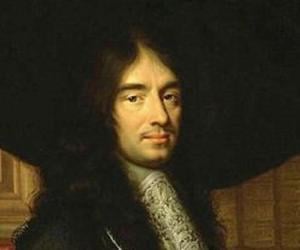 Famous As: Author
Born On: January 12, 1628
Died On: May 16, 1703
Born In: Paris, France
Died At Age: 75
Charles Perrault was an august French author, fairy tale writer, and a member of the 'Academie Francaise.' He laid the foundation of the fairy tale genre, with his thoughts, writings, and works obtained from pre-existing folk tales. Some of his notable works include, âPuss in Boots,â âThe Sleeping Beauty,â âLittle Red Riding Hood,â âBluebeard,â âCinderella.â More than 100 years later, Perraultâs versions of old stories inspired Brothers Grimm, who then published their German versions. One of the most defining figures of the 17-century, Perraultâs writings, thoughts, works, and stories are till date printed, have a large readership, and have been adapted into films, opera, theatre, and ballet. We have rounded the most famous and insightful quotes and sayings by Charles Perrault. Read through the motivational quotations and thoughts by Charles Perrault.
Listed In:
Writers 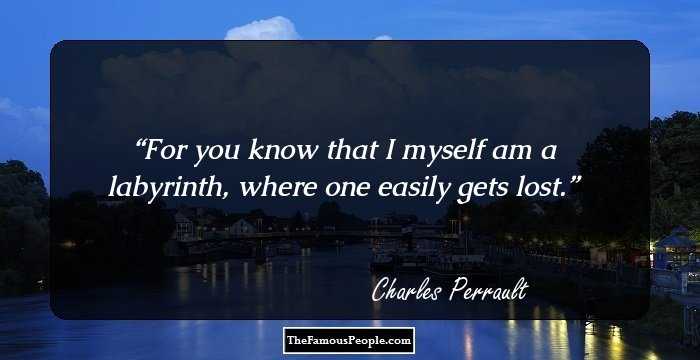 For you know that I myself am a labyrinth, where one easily gets lost.

You I
Charles Perrault 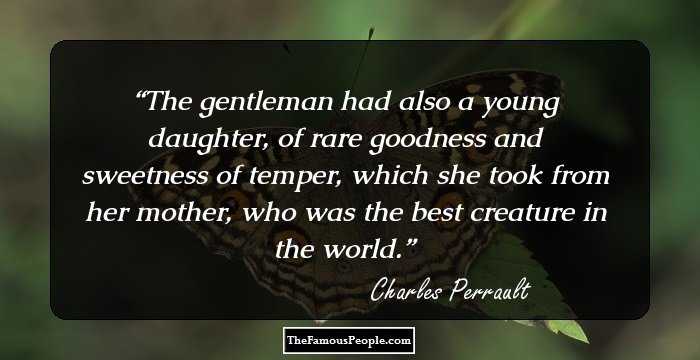 The gentleman had also a young daughter, of rare goodness and sweetness of temper, which she took from her mother, who was the best creature in the world. 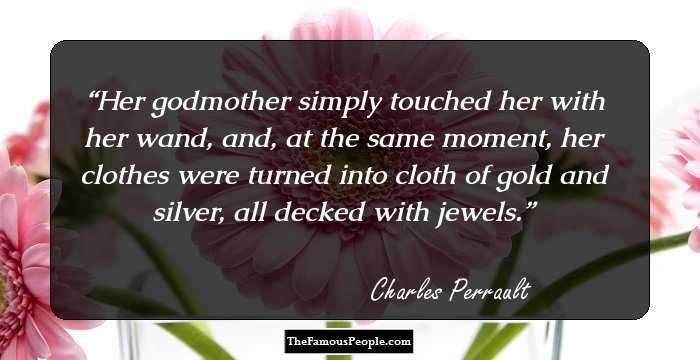 Her godmother simply touched her with her wand, and, at the same moment, her clothes were turned into cloth of gold and silver, all decked with jewels. 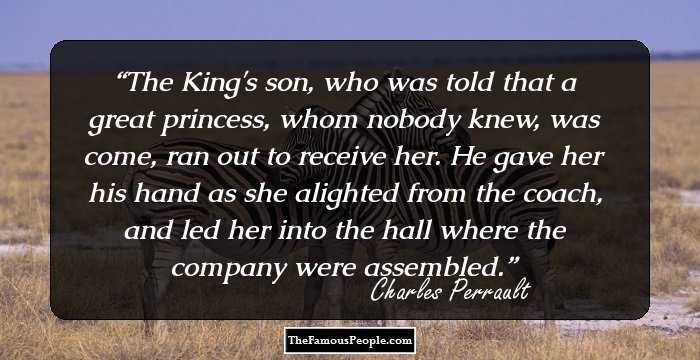 The King's son, who was told that a great princess, whom nobody knew, was come, ran out to receive her. He gave her his hand as she alighted from the coach, and led her into the hall where the company were assembled. 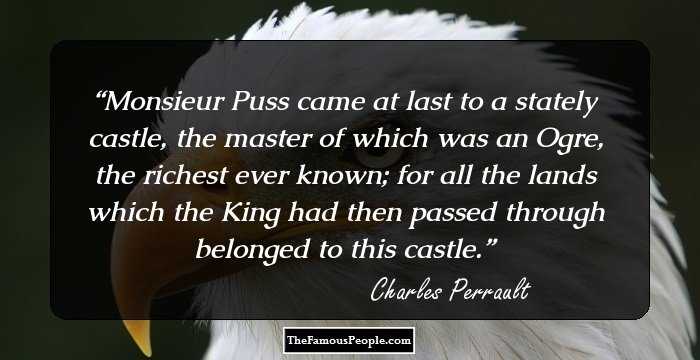 Monsieur Puss came at last to a stately castle, the master of which was an Ogre, the richest ever known; for all the lands which the King had then passed through belonged to this castle.

Once upon a time there was a Queen who had a son so ugly and so misshapen that it was long disputed whether he had human form. A fairy who was at his birth said, however, that he would be very amiable for all that, since he would have uncommon good sense. 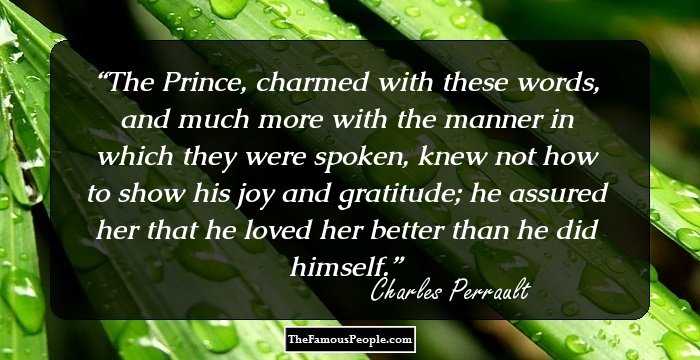 The Prince, charmed with these words, and much more with the manner in which they were spoken, knew not how to show his joy and gratitude; he assured her that he loved her better than he did himself.

After a hundred years the son of the King then reigning, who was of another family from that of the sleeping Princess, was a-hunting on that side of the country, and he asked what those towers were which he saw in the middle of a great thick wood. 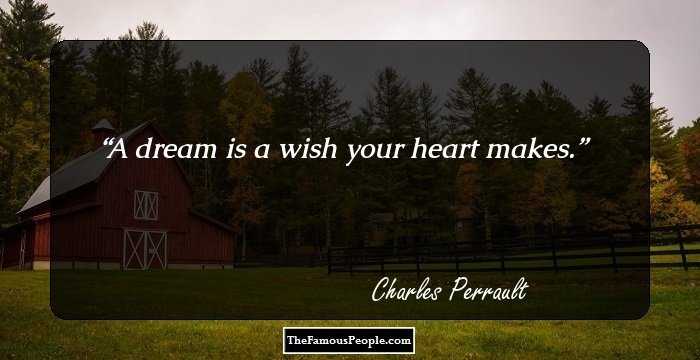 A dream is a wish your heart makes. 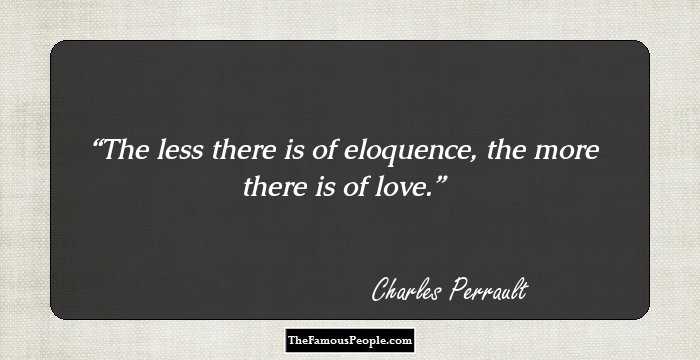 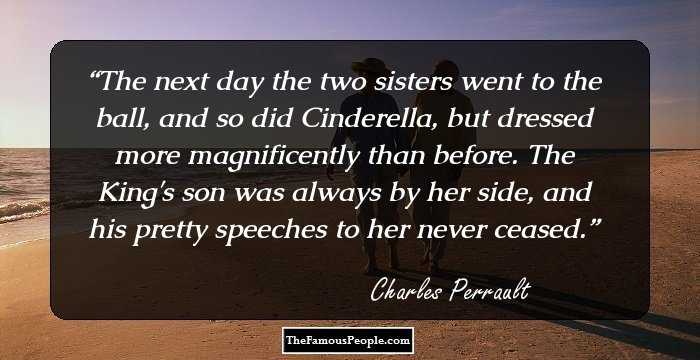 The next day the two sisters went to the ball, and so did Cinderella, but dressed more magnificently than before. The King's son was always by her side, and his pretty speeches to her never ceased. 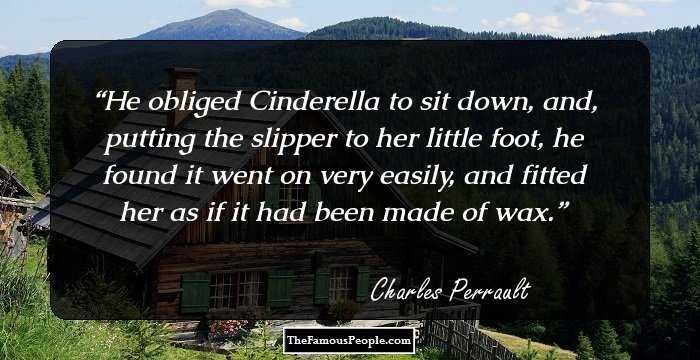 He obliged Cinderella to sit down, and, putting the slipper to her little foot, he found it went on very easily, and fitted her as if it had been made of wax. 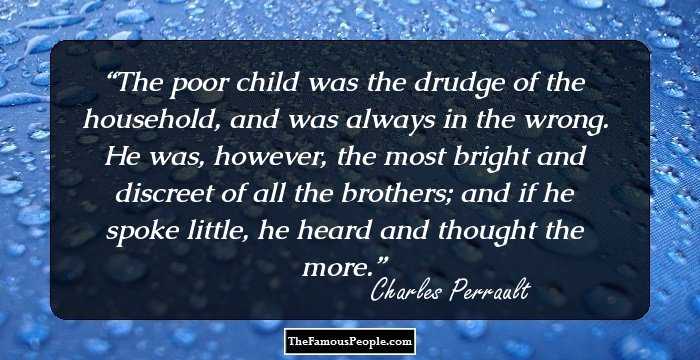 The poor child was the drudge of the household, and was always in the wrong. He was, however, the most bright and discreet of all the brothers; and if he spoke little, he heard and thought the more. 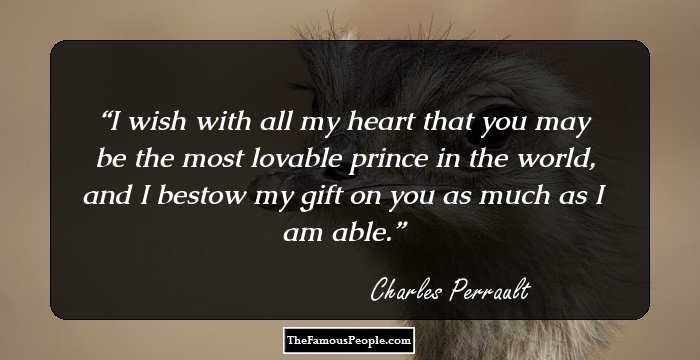 I wish with all my heart that you may be the most lovable prince in the world, and I bestow my gift on you as much as I am able. 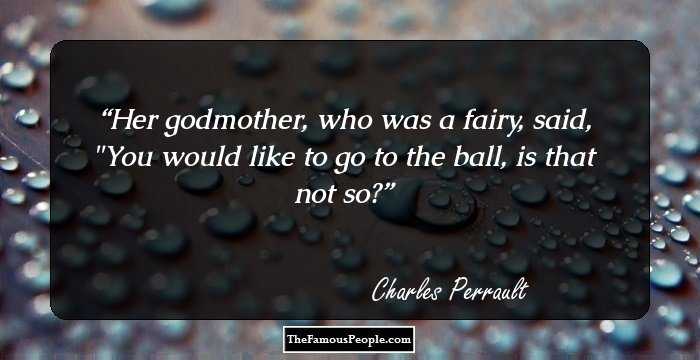 Her godmother, who was a fairy, said, "You would like to go to the ball, is that not so? 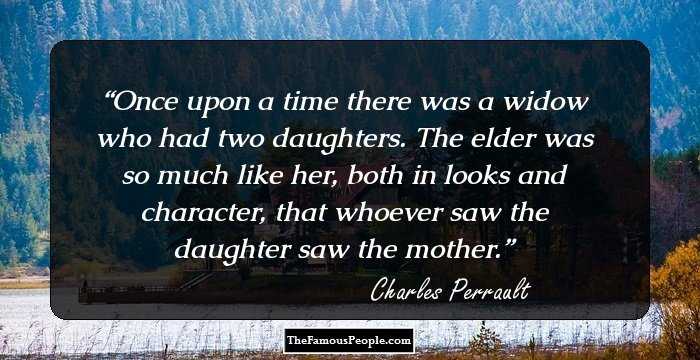 Once upon a time there was a widow who had two daughters. The elder was so much like her, both in looks and character, that whoever saw the daughter saw the mother. 100 Top Quotes By Alexandre Dumas, The Author of The Three Musketeers 100 Famous Quotes by Jules Verne, The Author of Around the World in Eighty Days