Famous As: Former President of Russia
Born On: February 1, 1931
Died On: April 23, 2007
Born In: Butka
Died At Age: 76
Boris Yeltsin was a Russian politician who served as the president of Russia from 1991 until 1999. He was a communist leader for much of his political life, but he eventually went with democratic and free market reforms, thereby playing a crucial role in the collapse of the former Soviet Union. Despite his successfull efforts at ushering Russia in a freer and more open society, Russia faced economic hardships, increased instances of corruption and crime, and a violent war in Chechnya. In addition to all these woes, Russiaâs influence on world affairs diminished. Being a global leader, he shared his views on several issues. We have rounded some of Boris Yelstin's top quotes from his speeches, interviews, articles, and general observations.
Listed In:
Leaders 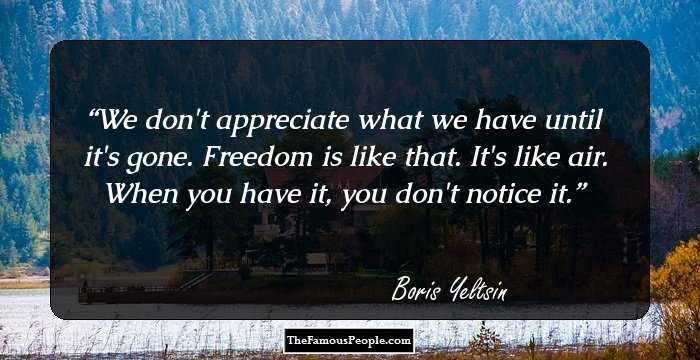 We don't appreciate what we have until it's gone. Freedom is like that. It's like air. When you have it, you don't notice it. 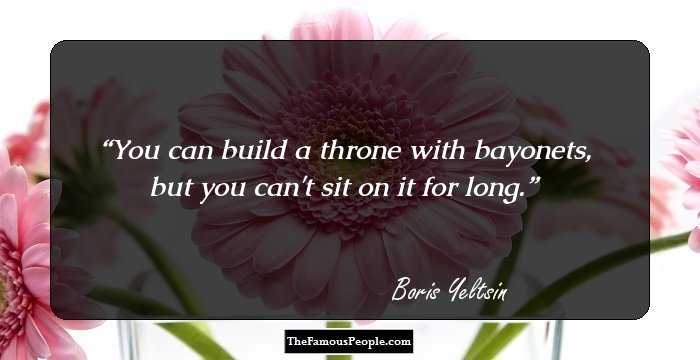 You can build a throne with bayonets, but you can't sit on it for long. 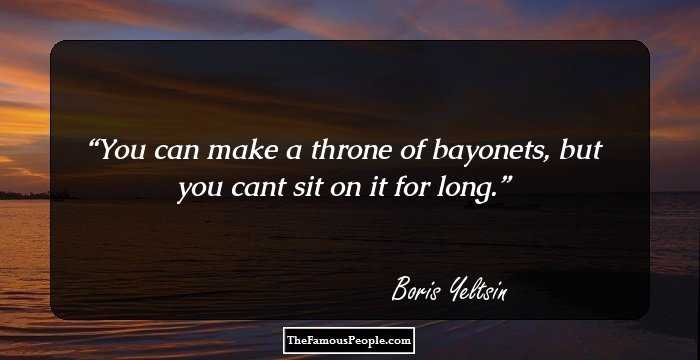 You can make a throne of bayonets, but you cant sit on it for long. 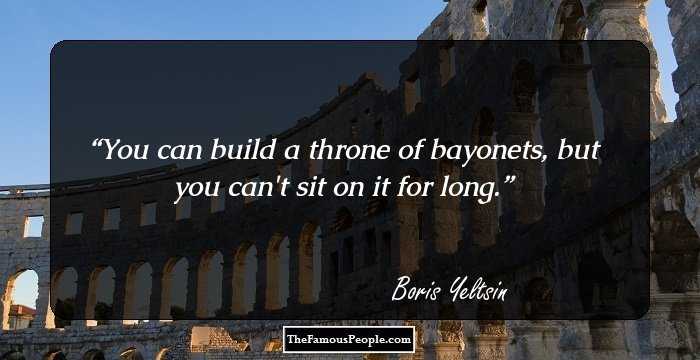 You can build a throne of bayonets, but you can't sit on it for long. 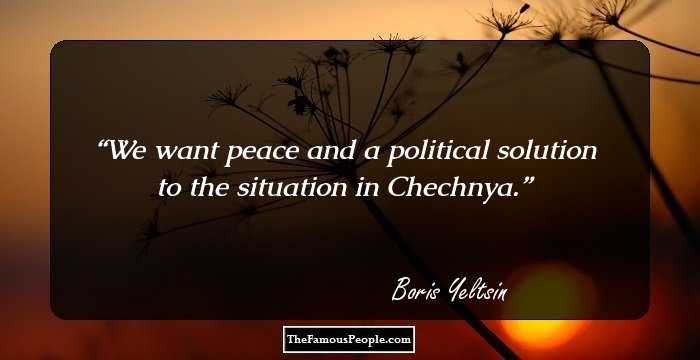 We want peace and a political solution to the situation in Chechnya. 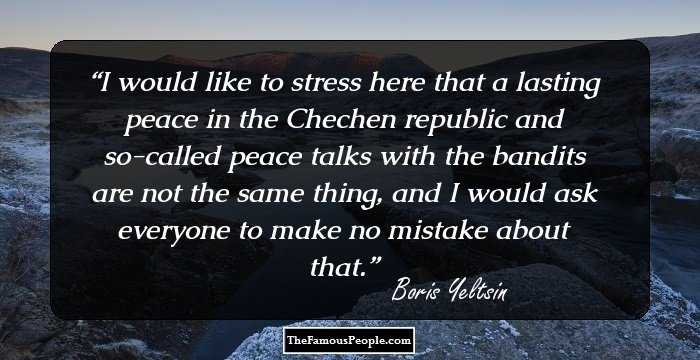 I would like to stress here that a lasting peace in the Chechen republic and so-called peace talks with the bandits are not the same thing, and I would ask everyone to make no mistake about that. 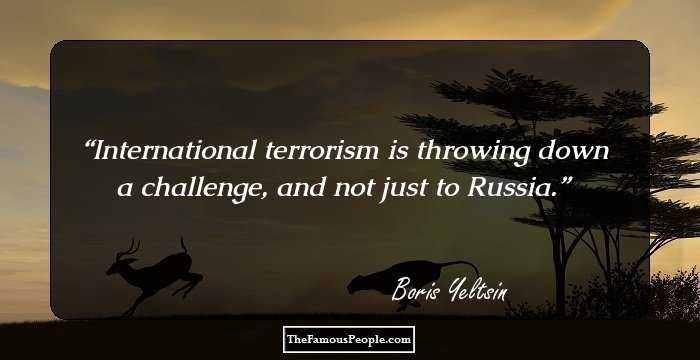 International terrorism is throwing down a challenge, and not just to Russia. 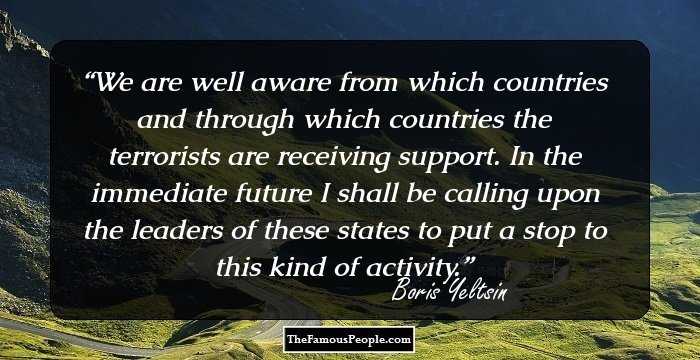 We are well aware from which countries and through which countries the terrorists are receiving support. In the immediate future I shall be calling upon the leaders of these states to put a stop to this kind of activity. 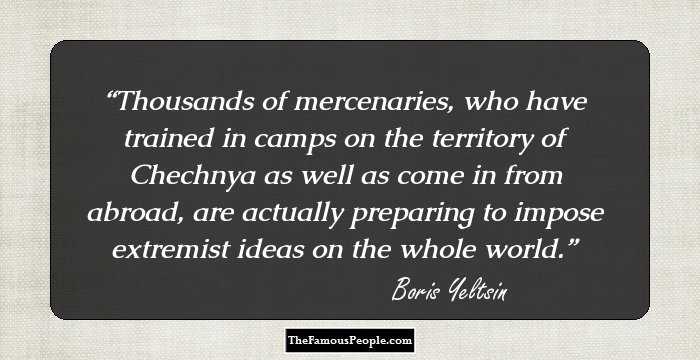 Thousands of mercenaries, who have trained in camps on the territory of Chechnya as well as come in from abroad, are actually preparing to impose extremist ideas on the whole world. 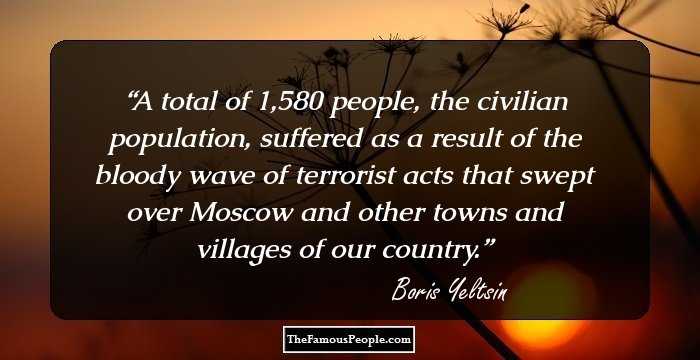 A total of 1,580 people, the civilian population, suffered as a result of the bloody wave of terrorist acts that swept over Moscow and other towns and villages of our country. 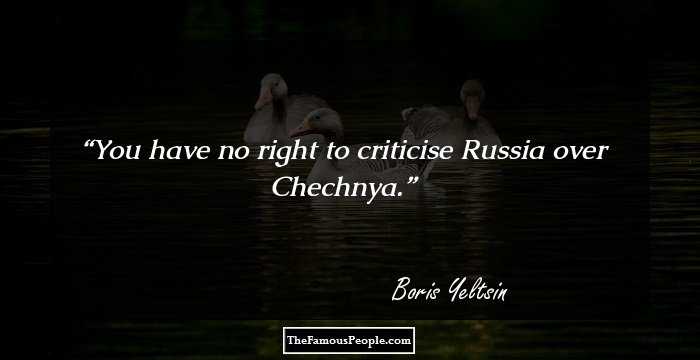 You have no right to criticise Russia over Chechnya. 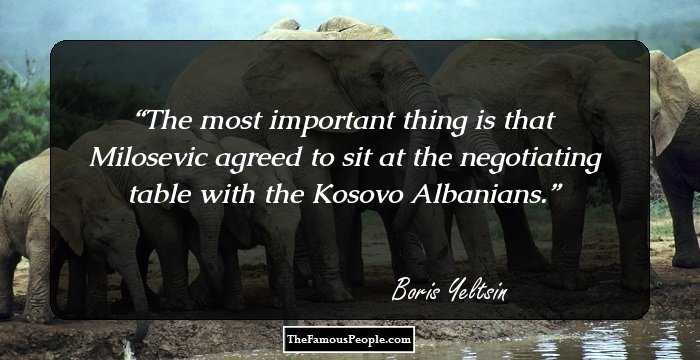 The most important thing is that Milosevic agreed to sit at the negotiating table with the Kosovo Albanians. 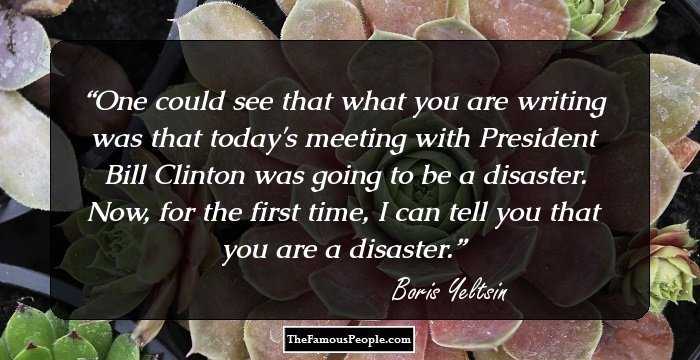 One could see that what you are writing was that today's meeting with President Bill Clinton was going to be a disaster. Now, for the first time, I can tell you that you are a disaster. 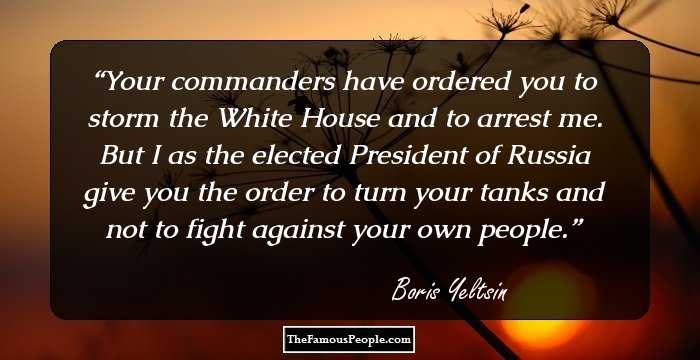 Your commanders have ordered you to storm the White House and to arrest me. But I as the elected President of Russia give you the order to turn your tanks and not to fight against your own people. 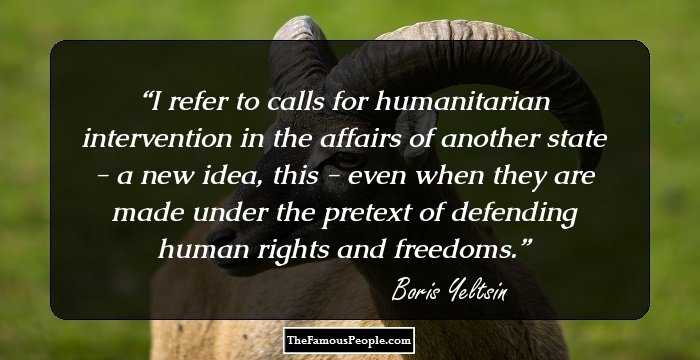 I refer to calls for humanitarian intervention in the affairs of another state - a new idea, this - even when they are made under the pretext of defending human rights and freedoms. 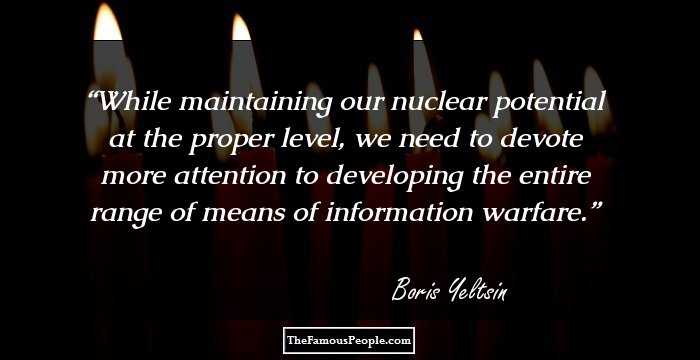 While maintaining our nuclear potential at the proper level, we need to devote more attention to developing the entire range of means of information warfare. 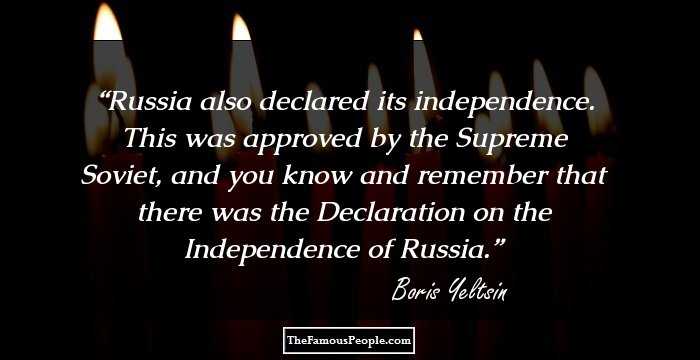 Russia also declared its independence. This was approved by the Supreme Soviet, and you know and remember that there was the Declaration on the Independence of Russia. 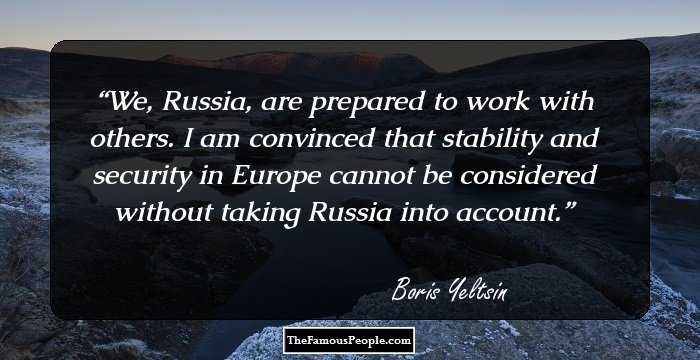 We, Russia, are prepared to work with others. I am convinced that stability and security in Europe cannot be considered without taking Russia into account. 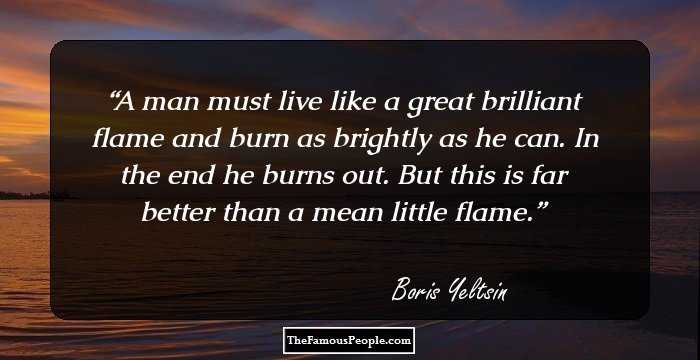 A man must live like a great brilliant flame and burn as brightly as he can. In the end he burns out. But this is far better than a mean little flame. 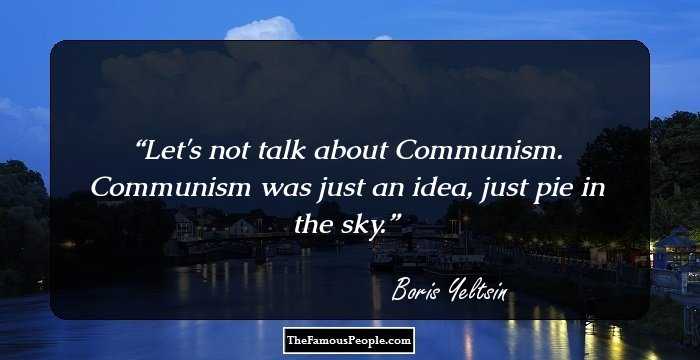 Let's not talk about Communism. Communism was just an idea, just pie in the sky. 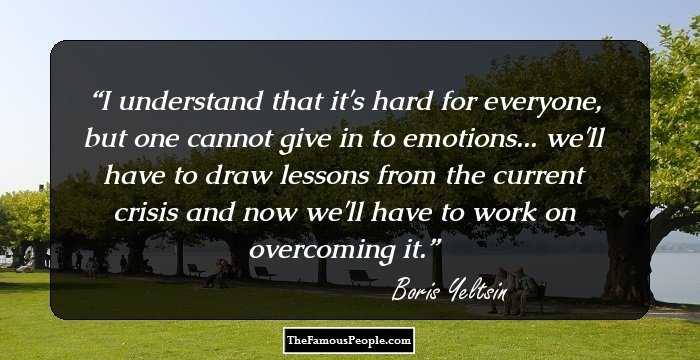 I understand that it's hard for everyone, but one cannot give in to emotions... we'll have to draw lessons from the current crisis and now we'll have to work on overcoming it.

It is especially important to encourage unorthodox thinking when the situation is critical: At such moments every new word and fresh thought is more precious than gold. Indeed, people must not be deprived of the right to think their own thoughts.

We all have an equal interest in stability and security throughout Europe. The years the OSCE has existed, and particularly this year, have given rise to great expectations and at the same time to powerful disappointments.

There are numerous bugbears in the profession of a politician. First, ordinary life suffers. Second, there are many temptations to ruin you and those around you. And I suppose third, and this is rarely discussed, people at the top generally have no friends.

Europe has found itself confronted with fresh challenges - challenges of a global character, the nature of which is directly connected with changes in the international climate and the difficulties of seeking new models for co-operation.

There were no strategic mistakes that could affect Russia's history and it further development. No, there were no such mistakes. Tactical errors were made in some less significant options, problems and so on. But, on the whole, Russia embarked on a correct path and it changed.