19 Interesting Quotes By Bob Black That Challenge The Existing Norms

Famous As: American author
Born On: January 4, 1951
Born In: Detroit, Michigan
Age: 71 Years
Bob Black is a distinguished American anarchist and author. He is regarded as one of the prime post-left anarchists. He strongly criticized work and called for its eradication. While the leftist asked for full-employment, Bob felt that the society should not revolve around production and consumption. His style has been described as savagely satirical, and according to him work is a forced labor. Some of his notable works are âBeneath the Underground,â âFriendly Fire,â âDefacing the Currency,â âThe Abolition of Work and Other Essays,â âAnarchy After Leftism,â and a number of other political essays. Following is a collection of quotes and sayings by Bob Black, which have been corralled from his books, thoughts, writings, works, and life. Let us browse through the quotes and sayings by Bob Black and see what we can learn from them.
Listed In:
Philosophers
Intellectuals & Academics 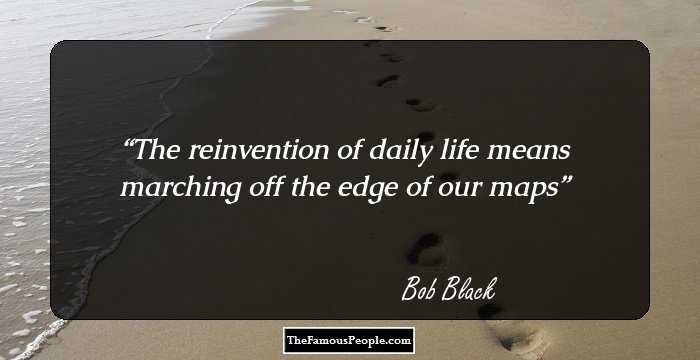 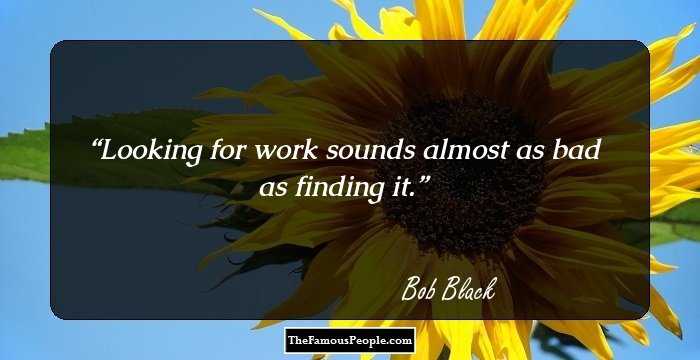 Looking for work sounds almost as bad as finding it. 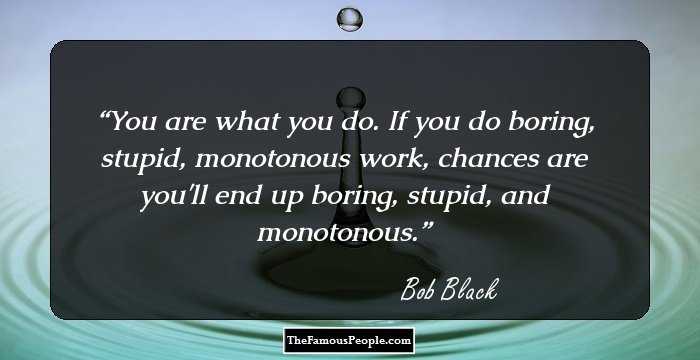 You are what you do. If you do boring, stupid monotonous work, chances are you'll end up boring, stupid and monotonous. Work is a much better explanation for the creeping cretinization all around us than even such significant moronizing mechanisms as television and education. 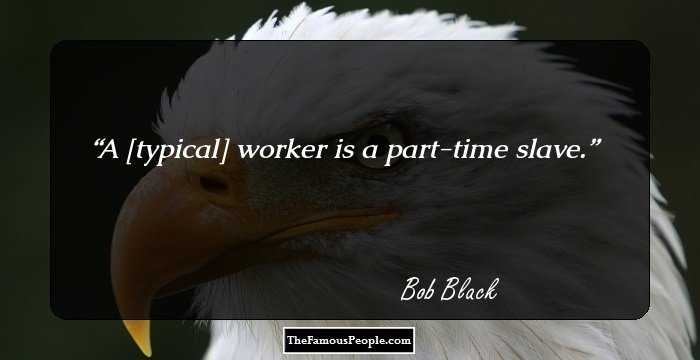 A [typical] worker is a part-time slave. 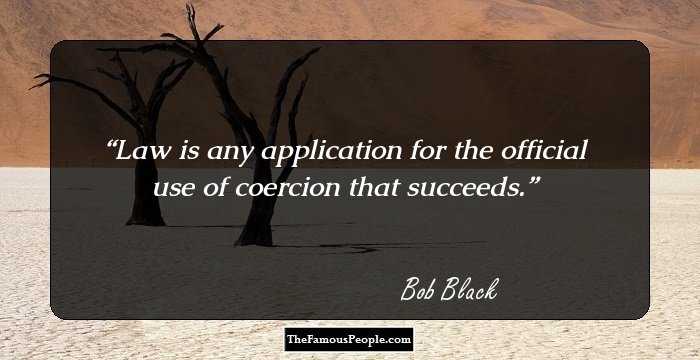 Law is any application for the official use of coercion that succeeds. 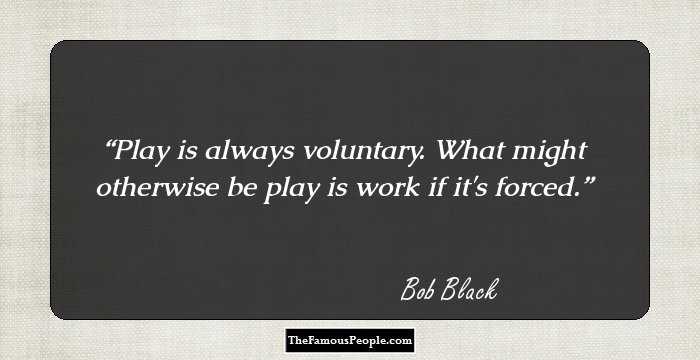 Play is always voluntary. What might otherwise be play is work if it's forced. 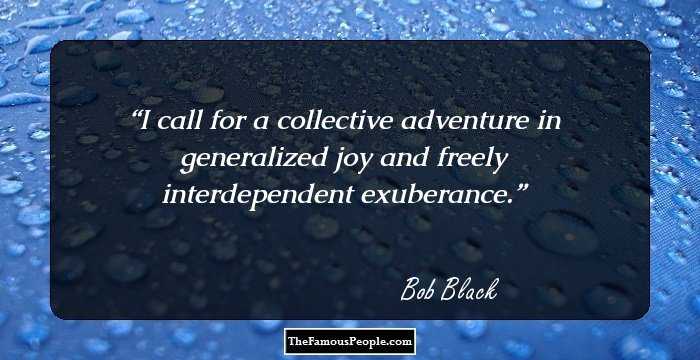 I call for a collective adventure in generalized joy and freely interdependent exuberance. 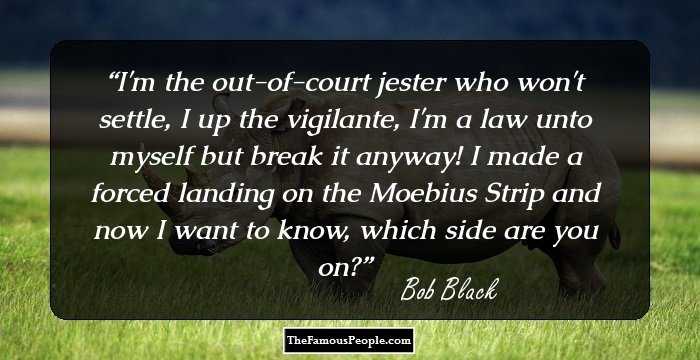 I'm the out-of-court jester who won't settle, I up the vigilante, I'm a law unto myself but break it anyway! I made a forced landing on the Moebius Strip and now I want to know, which side are you on? 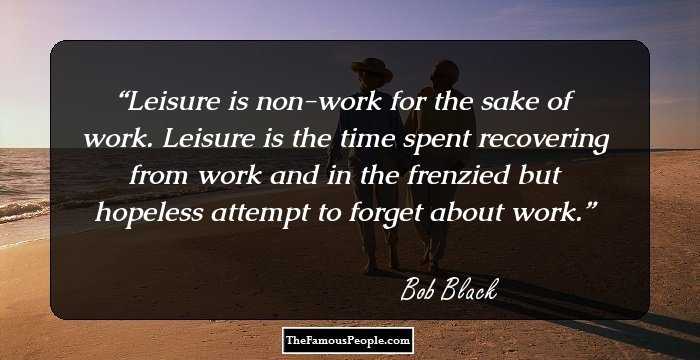 Leisure is non-work for the sake of work. Leisure is the time spent recovering from work and in the frenzied but hopeless attempt to forget about work. 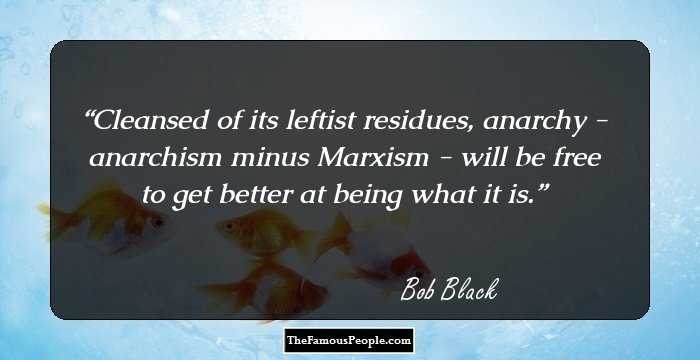 Cleansed of its leftist residues, anarchy - anarchism minus Marxism - will be free to get better at being what it is. 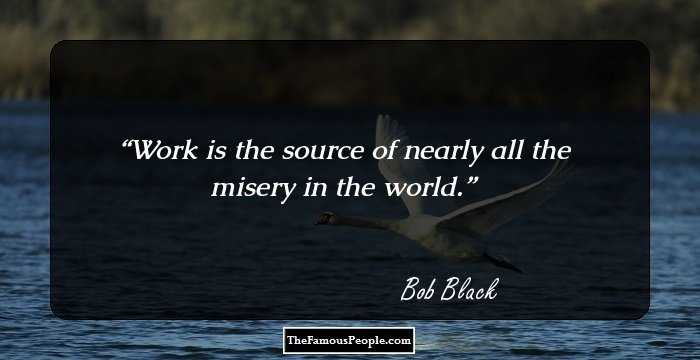 Work is the source of nearly all the misery in the world. 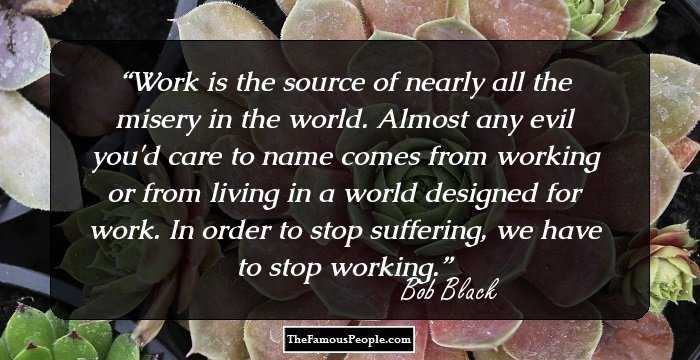 Work is the source of nearly all the misery in the world. Almost any evil you'd care to name comes from working or from living in a world designed for work. In order to stop suffering, we have to stop working. 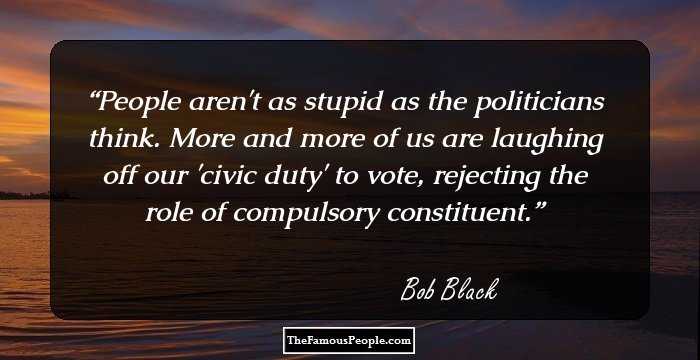 People aren't as stupid as the politicians think. More and more of us are laughing off our 'civic duty' to vote, rejecting the role of compulsory constituent. 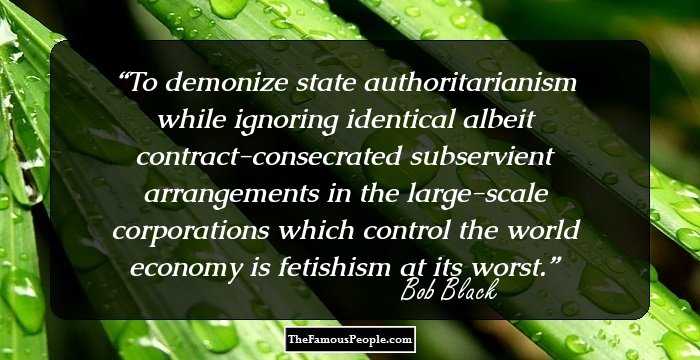 To demonize state authoritarianism while ignoring identical albeit contract-consecrated subservient arrangements in the large-scale corporations which control the world economy is fetishism at its worst. 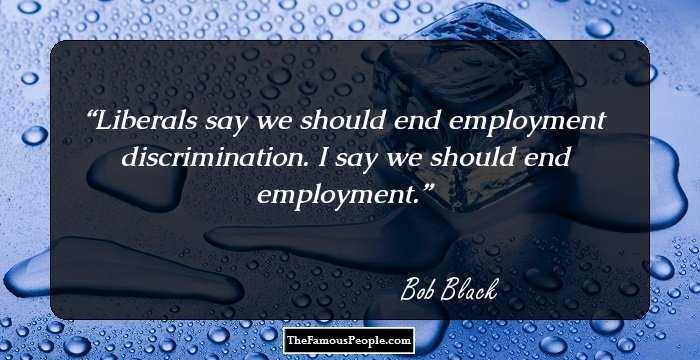 [Libertarians] don't denounce what the state does, they just object to who's doing it. This is why the people most victimized by the state display the least interest in libertarianism. Those on the receiving end of coercion don't quibble over their coercers' credentials. If you can't pay or don't want to, you don't much care if your deprivation is called larceny or taxation or restitution or rent. If you like to control your own time, you distinguish employment from enslavement only in degree and duration.

... the place where [adults] pass the most time and submit to the closest control is at work. Thus, without even entering into the question of the world economy's ultimate dictation within narrow limits of everybody's productive activity, it's apparent that the source of the greatest direct duress experienced by the ordinary adult is _not_ the state but rather the business that employs him. Your foreman or supervisor gives you more or-else orders in a week than the police do in a decade.

Unlike side issues like unemployment, unions, and minimum-wage laws, the subject of work itself is almost entirely absent from libertarian literature. Most of what little there is consists of Randite rantings against parasites, barely distinguishable from the invective inflicted on dissidents by the Soviet press....