Famous As: Actor and Filmmaker Best Known for His TV Series 'Big Love'
Born On: May 17, 1955
Died On: February 25, 2017
Born In: Fort Worth, Texas, United States
Died At Age: 61
Bill Paxton was an eminent American director and actor. He started off his career with roles in television series. His first big break in Hollywood came with âThe Terminator.â Some of his other notable works include, âTitanic,â âEdge of Tomorrow,â âWeird Science,â âPredator,â âAliens,â and many others. He was part of âBig Love,â an HBO drama series for which he bagged in three âGolden Globe Awardâ nominations. His performance in âHatfields & McCoys,â a History channel miniseries, was also well-received by the audience. He starred in âThe Circle,â which was his last performance and released posthumously. Following is a compilation of inspiring quotes and thoughts by Bill Paxton. Take a look at the interesting and memorable lines, words, quotes and sayings by Bill Paxton which have been excerpted from his works, thoughts, one liner, roles, dialogues, movies, interviews, and life.
Listed In:
Actors
Film & Theater Personalities 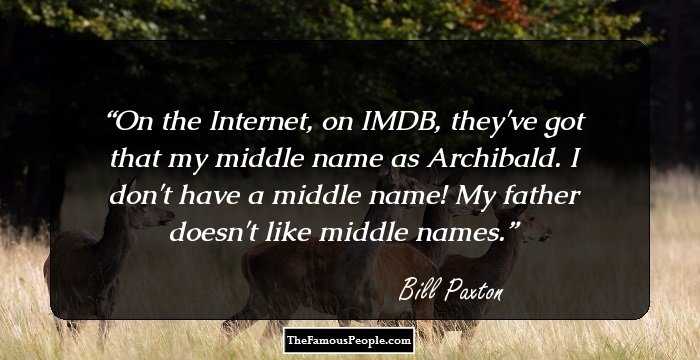 On the Internet, on IMDB, they've got that my middle name as Archibald. I don't have a middle name! My father doesn't like middle names. 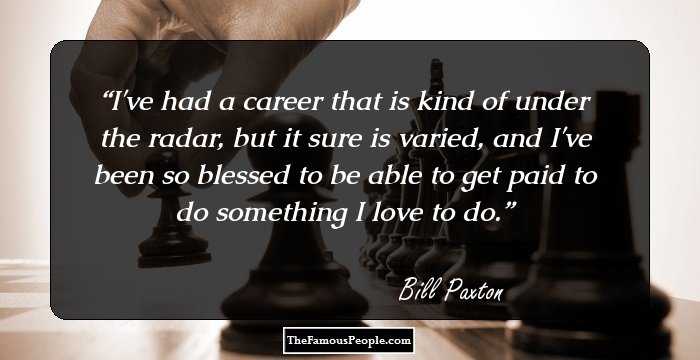 I've had a career that is kind of under the radar, but it sure is varied, and I've been so blessed to be able to get paid to do something I love to do. 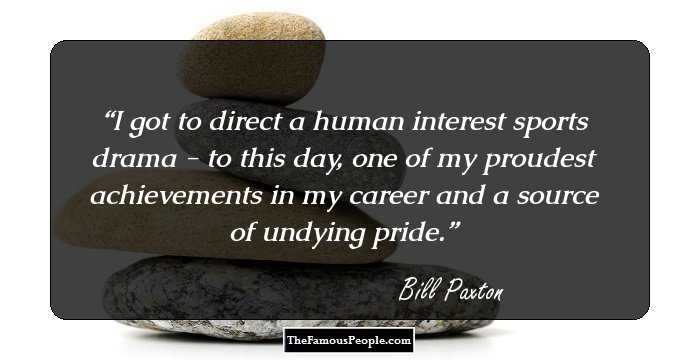 I got to direct a human interest sports drama - to this day, one of my proudest achievements in my career and a source of undying pride. 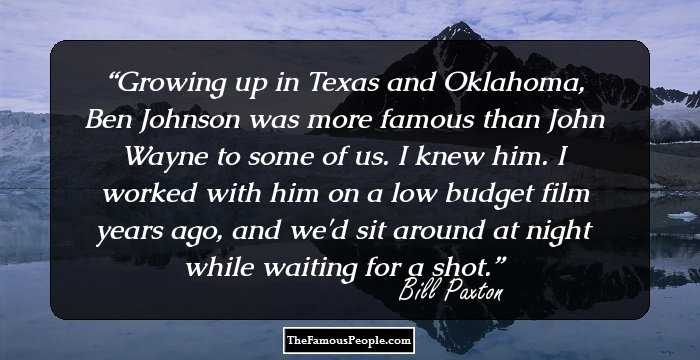 Growing up in Texas and Oklahoma, Ben Johnson was more famous than John Wayne to some of us. I knew him. I worked with him on a low budget film years ago, and we'd sit around at night while waiting for a shot. 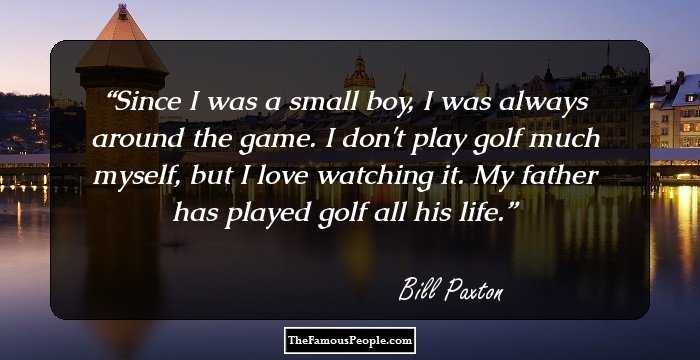 Since I was a small boy, I was always around the game. I don't play golf much myself, but I love watching it. My father has played golf all his life. 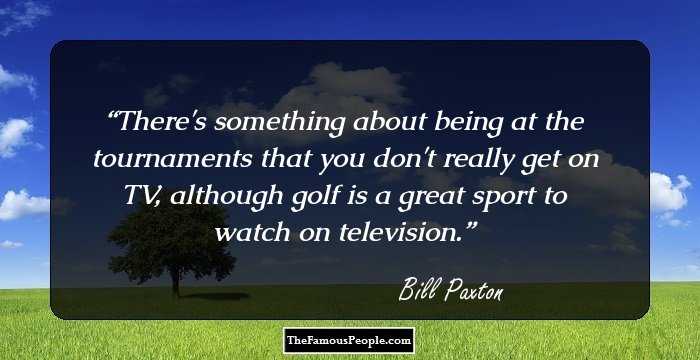 There's something about being at the tournaments that you don't really get on TV, although golf is a great sport to watch on television. 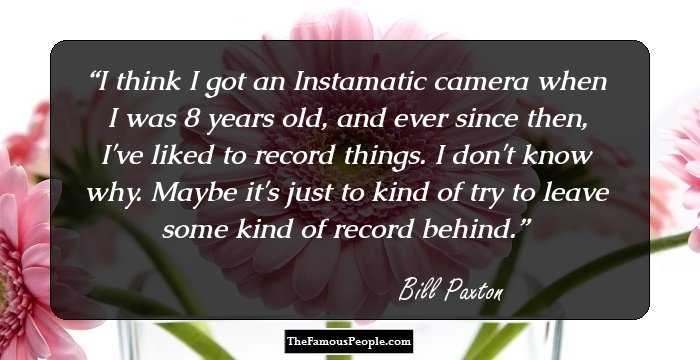 I think I got an Instamatic camera when I was 8 years old, and ever since then, I've liked to record things. I don't know why. Maybe it's just to kind of try to leave some kind of record behind. 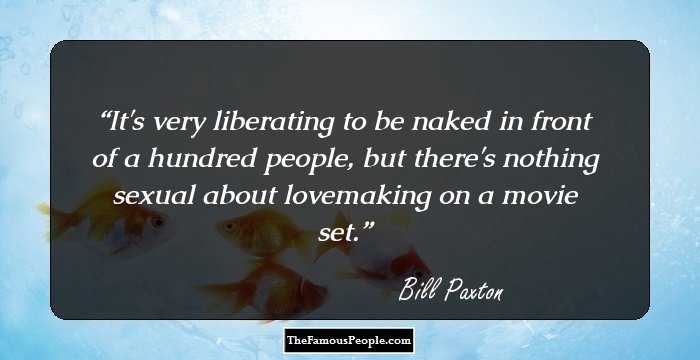 It's very liberating to be naked in front of a hundred people, but there's nothing sexual about lovemaking on a movie set. 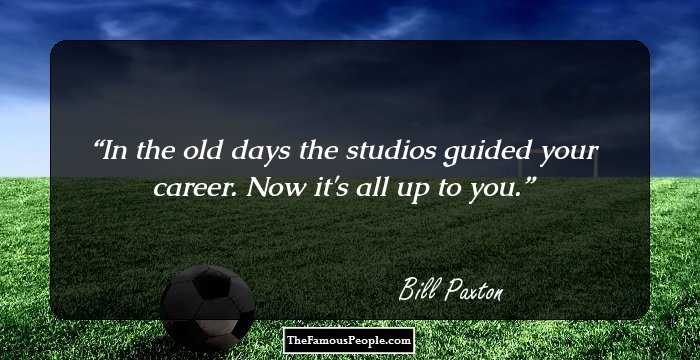 In the old days the studios guided your career. Now it's all up to you. 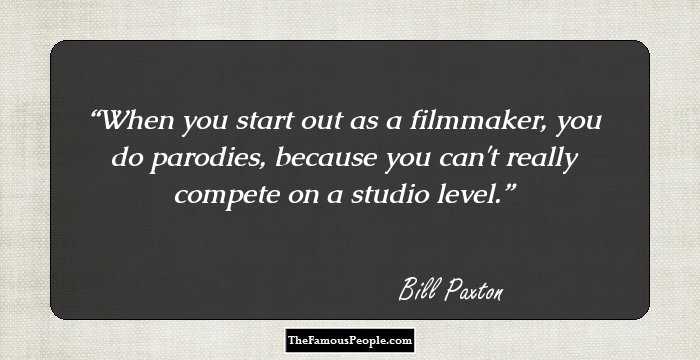 When you start out as a filmmaker, you do parodies, because you can't really compete on a studio level. 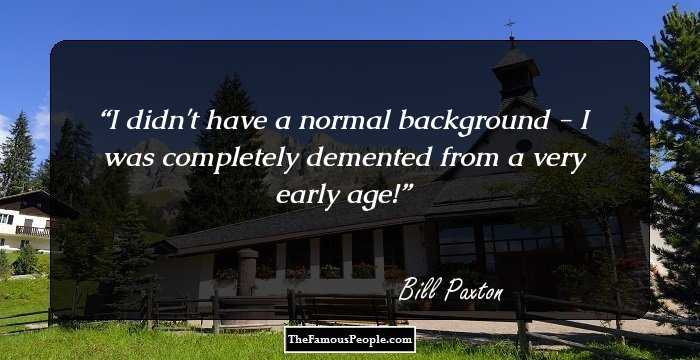 I didn't have a normal background - I was completely demented from a very early age! 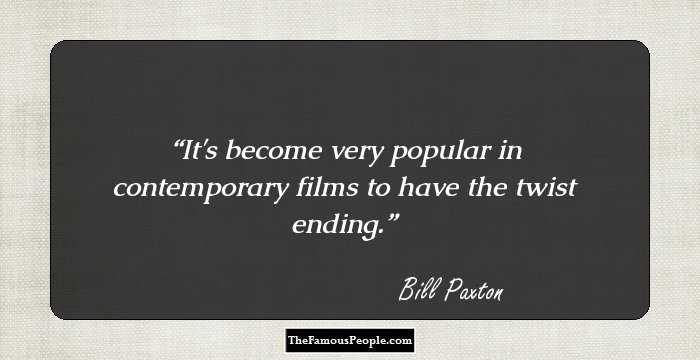 It's become very popular in contemporary films to have the twist ending. 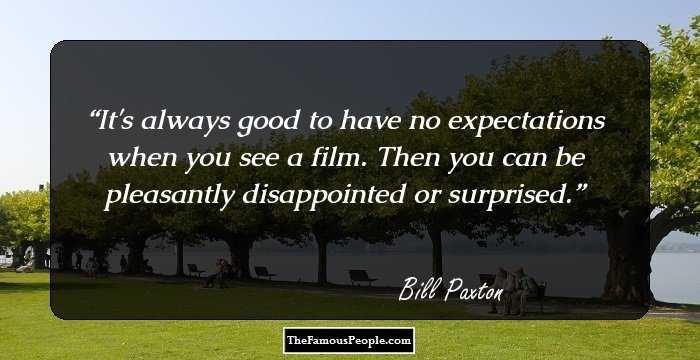 It's always good to have no expectations when you see a film. Then you can be pleasantly disappointed or surprised. 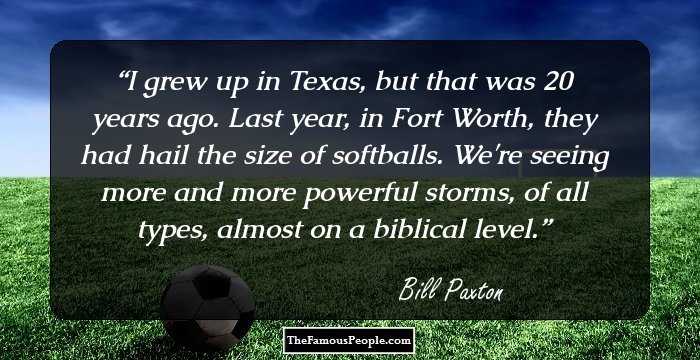 I grew up in Texas, but that was 20 years ago. Last year, in Fort Worth, they had hail the size of softballs. We're seeing more and more powerful storms, of all types, almost on a biblical level. 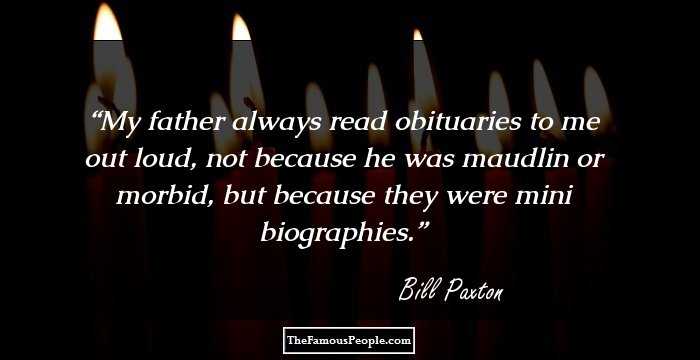 My father always read obituaries to me out loud, not because he was maudlin or morbid, but because they were mini biographies. 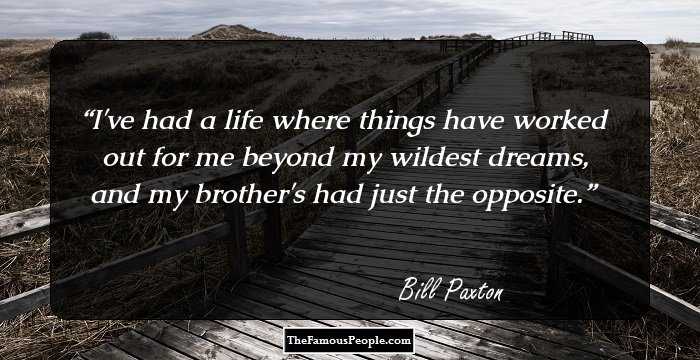 I've had a life where things have worked out for me beyond my wildest dreams, and my brother's had just the opposite. 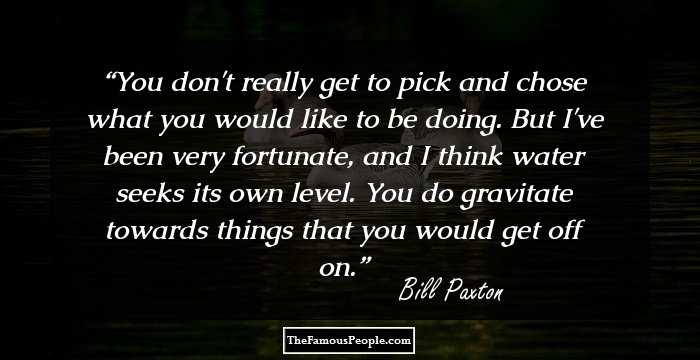 You don't really get to pick and chose what you would like to be doing. But I've been very fortunate, and I think water seeks its own level. You do gravitate towards things that you would get off on. 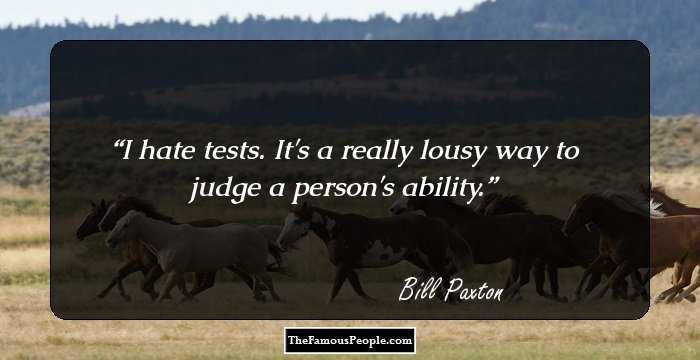 I hate tests. It's a really lousy way to judge a person's ability. 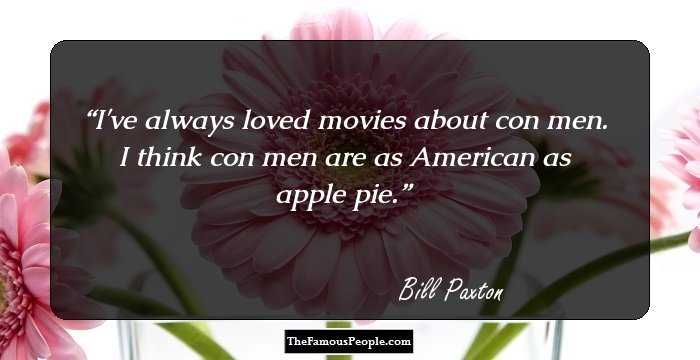 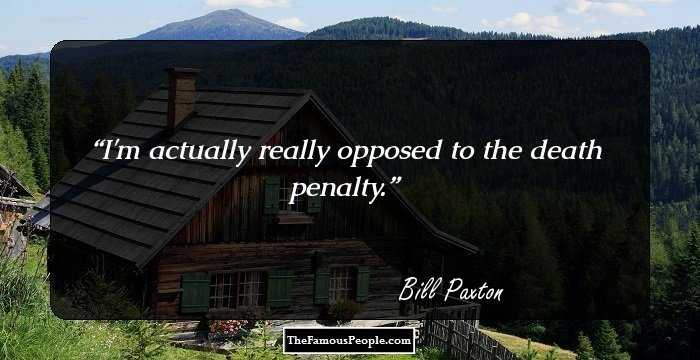 My first film was a movie shot in 1974. I was 18 on that movie set. It was called 'Big Bad Mama.' I turned 19 on the next movie I worked on, which was a black 'Blazing Saddles.' I worked in the art department. It was called 'Darktown Strutters.'

I came out to Hollywood when I was just 18, and my dad, he was really into Hollywood and theater and art, and I guess growing up, he exposed me to a lot of culture, and I just started making Super-8 films in high school and decided I wanted to be a filmmaker.

I don't care how much hardware you throw at an audience. If they are not emotionally invested in the thing, it's zero. I can name a slew of films, but I have no ax to grind. I understand the commerce of Hollywood probably better than anyone.

It's easy to get jaded. It's easy to get lazy. It's easy to get too self-centric, like, 'Why me? What about my needs?' It has nothing to do with that. But you see, you are the thing you are selling whether you are a director or an actor in this business. It's very tough. The town doesn't realize that its greatest resource is its people.

What's been nice is that I've been able to direct from a very idealistic place. I've never had to make my living as a director, which gave me a chance to choose material I feel passionate about. The directing allows me to not have to grab any acting role that comes along. I can pick and choose a little bit.

In our game, it's your vanity that keeps you in shape. I've got a little gym set up, and I ride a single-speed bike up the hills behind my house. Lately I've been kind of a slacker. Usually it's a film role that makes me start getting in shape. Between roles, I try to do a little maintenance, but I'm not a workout fanatic at all.

It was so weird that I would end up directing 'The Greatest Game Ever Played,' because, y'know, I'm not a big golfer myself. But I grew up around the game. My mom and dad kind of built their dream house off the 11th fairway of Shady Oaks Country Club in Fort Worth.