13 Motivational Quotes By Bernie Taupin For All Music Lovers

Bernie Taupin is a prolific English lyricist. He is renowned for his collaboration with Elton John. He has written the lyrics of a number of Johnâs songs. They have collaborated on more than thirty albums. Taupin has worked with various other artists, including Alice Cooper, Tom Robinson, David Ackles, Gary Bernstein and Gary Osborne. Some of his notable works include âSaturday Nightâs Alright for Fighting,â âRocket Man,â âSad Songs,â âDonât Let The Sun Go Down On Me,â âDaniel,â âGoodbye Yellow Brick Road,â âThe Bitch Is Back,â and many more. Let us browse through quotes by Bernie Taupin on poetry, lyrics, writing, world, songs, interviews, albums, mother, life, work, quitting, and more. 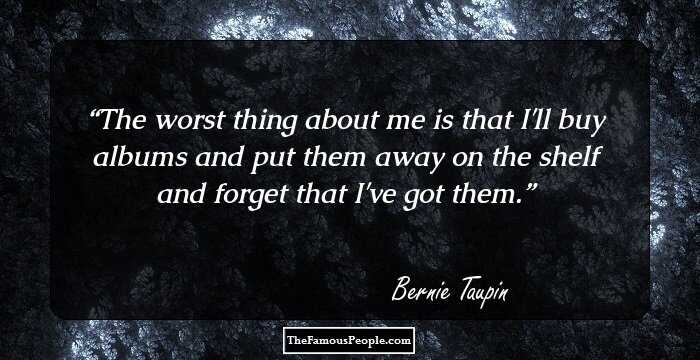 The worst thing about me is that I'll buy albums and put them away on the shelf and forget that I've got them. 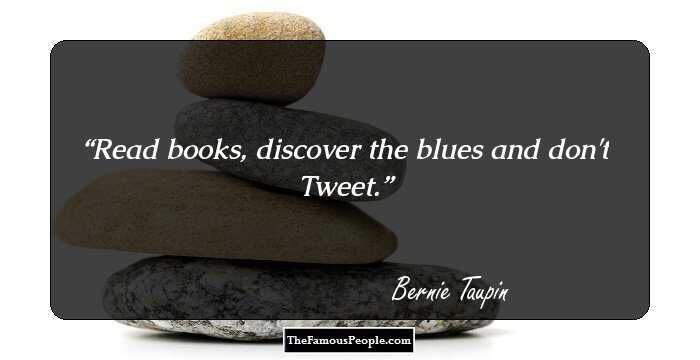 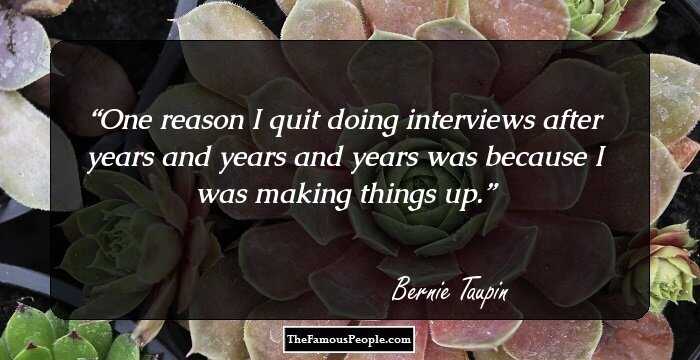 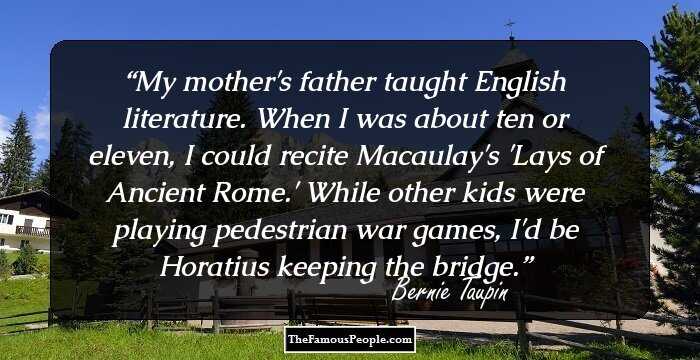 My mother's father taught English literature. When I was about ten or eleven, I could recite Macaulay's 'Lays of Ancient Rome.' While other kids were playing pedestrian war games, I'd be Horatius keeping the bridge. 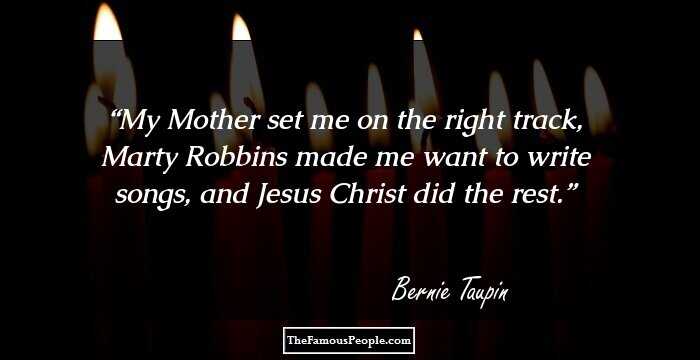 My Mother set me on the right track, Marty Robbins made me want to write songs, and Jesus Christ did the rest. 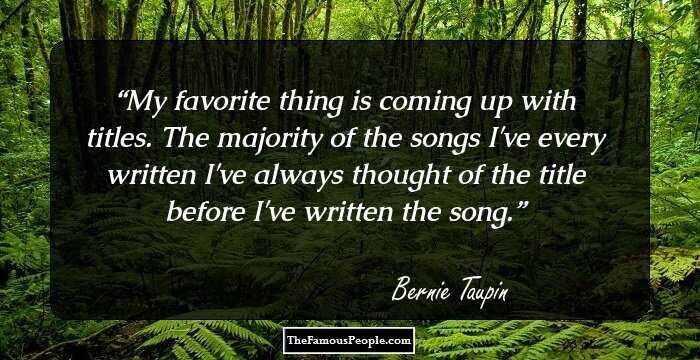 My favorite thing is coming up with titles. The majority of the songs I've every written I've always thought of the title before I've written the song. 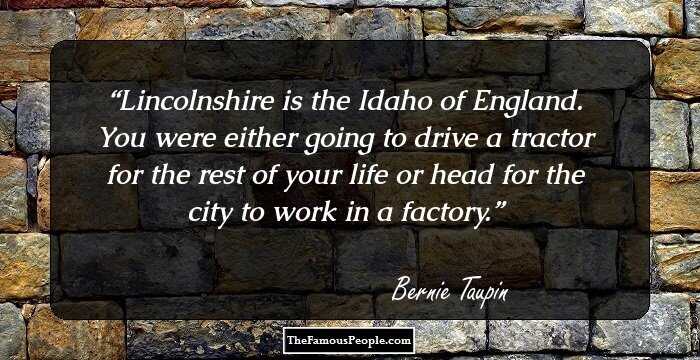 Lincolnshire is the Idaho of England. You were either going to drive a tractor for the rest of your life or head for the city to work in a factory. 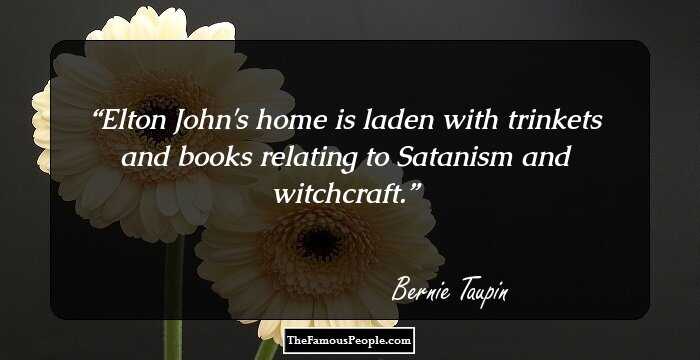 Elton John's home is laden with trinkets and books relating to Satanism and witchcraft. 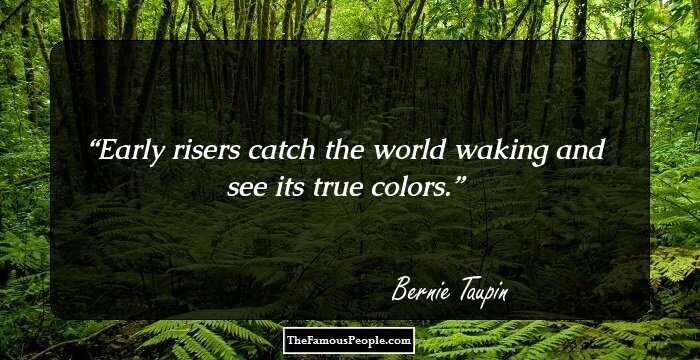 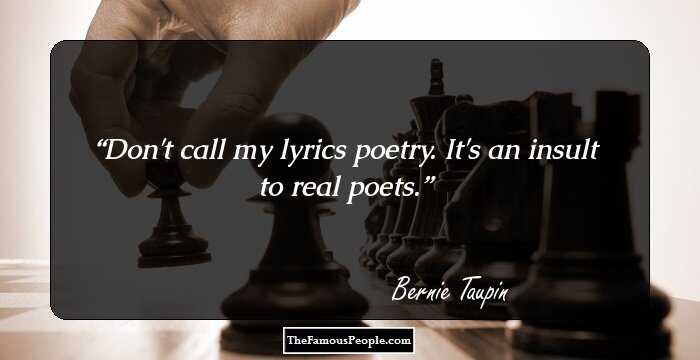 Don't call my lyrics poetry. It's an insult to real poets. 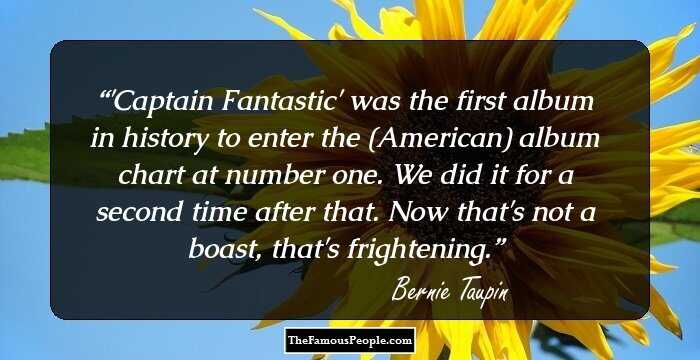 'Captain Fantastic' was the first album in history to enter the (American) album chart at number one. We did it for a second time after that. Now that's not a boast, that's frightening.

Basically it takes me very little time to write a song. If I find myself taking more than an hour to do it I usually forget it, and try something else. I like to work quickly; I never like to waste any time. I never write half a song and come back to it later at all. It all has to be done at once. I lose interest if it doesn't.

I am a simple vessel with complex overtones, opinionated on occasions but willing to listen. Comfortable with reclusiveness and devoted to privacy and family. Patriotic to a fault and allergic to cruelty, ignorance and bad music. 23 Barbara Palvin Quotes That Will Make You Feel Good