Famous As: Founding Father of the United States
Born On: January 4, 1746
Died On: April 19, 1813
Born In: Byberry, Philadelphia, United States
Founder / Co Founder: American psychiatry, Dickinson College
Died At Age: 67
The Founding Father of the United States, Benjamin Rush was an illustrious civic leader from Philadelphia, where he was an educator, physician, founder of Dickinson College, politician, humanitarian, and a social reformer. He patronized the Continental Congress and initialized the Declaration of Independence. He served the Continental Army as its surgeon and also became a professor of medical theory, clinical practice and chemistry at the University of Pennsylvania. He was an ardent supporter of American Revolution and an important part of the American Enlightenment. He played a pivotal role in a number of reforms especially in the areas of education and medicine. We bring to you a collection of thought-provoking sayings and quotes by Benjamin Rush, which have been collected from the vast sea of his writings, thoughts, findings, speeches, works, and life.Â
Listed In:
Leaders 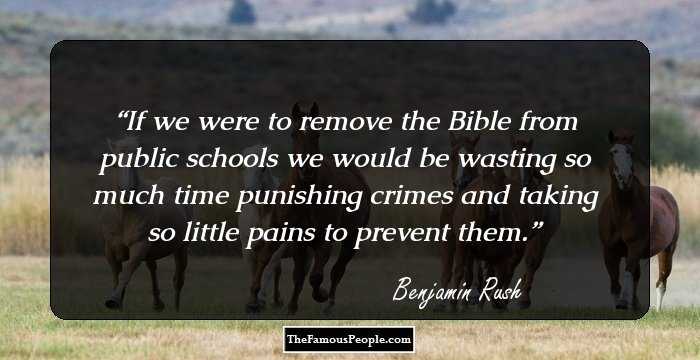 If we were to remove the Bible from public schools we would be wasting so much time punishing crimes and taking so little pains to prevent them. 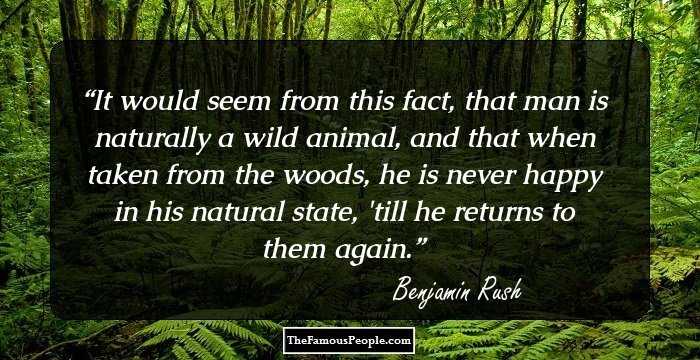 It would seem from this fact, that man is naturally a wild animal, and that when taken from the woods, he is never happy in his natural state, 'till he returns to them again. 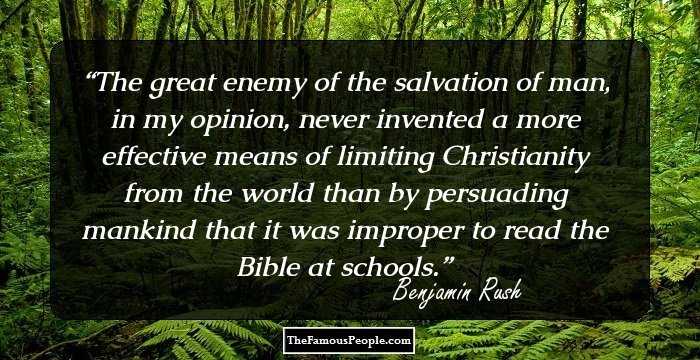 The great enemy of the salvation of man, in my opinion, never invented a more effective means of limiting Christianity from the world than by persuading mankind that it was improper to read the Bible at schools. 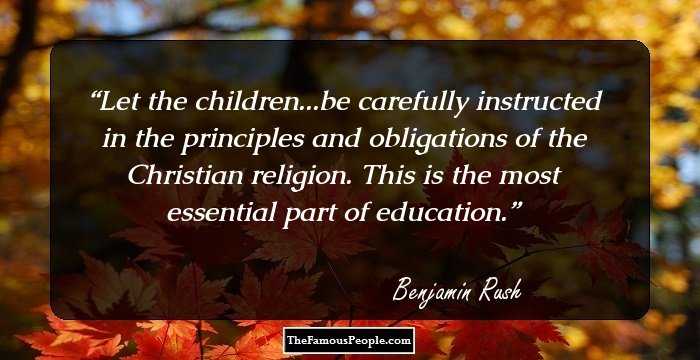 Let the children...be carefully instructed in the principles and obligations of the Christian religion. This is the most essential part of education. 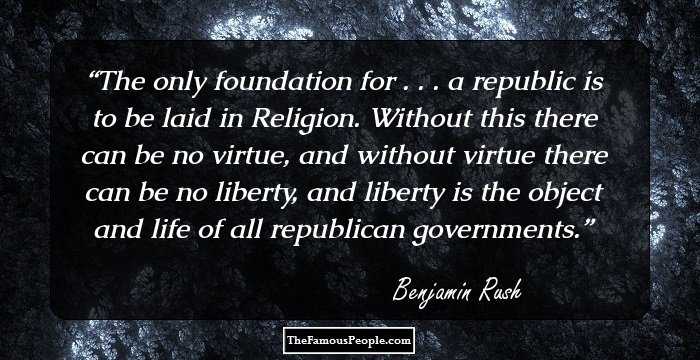 The only foundation for . . . a republic is to be laid in Religion. Without this there can be no virtue, and without virtue there can be no liberty, and liberty is the object and life of all republican governments. 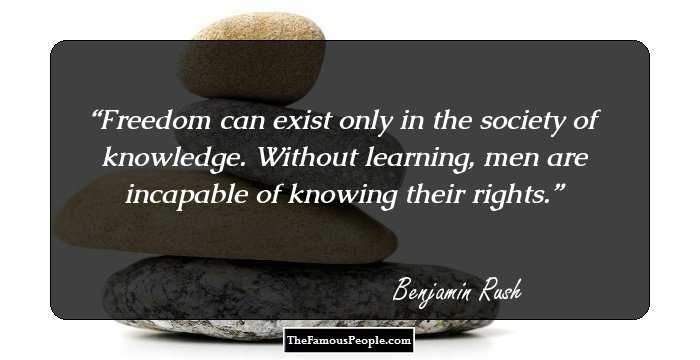 Freedom can exist only in the society of knowledge. Without learning, men are incapable of knowing their rights. 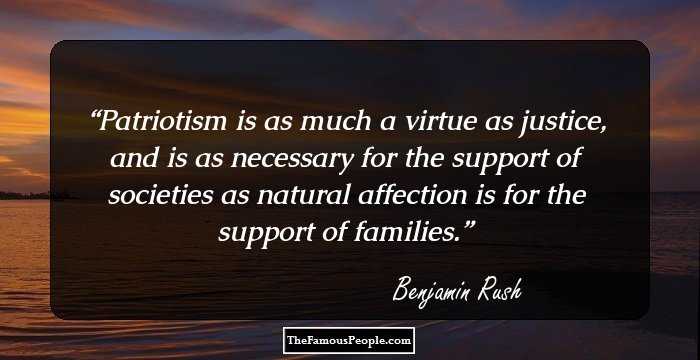 The Bible, when not read in schools, is seldom read in any subsequent period of life...The Bible...should be read in our schools in preference to all other books because it contains the greatest portion of that kind of knowledge which is calculated to produce private and public happiness. 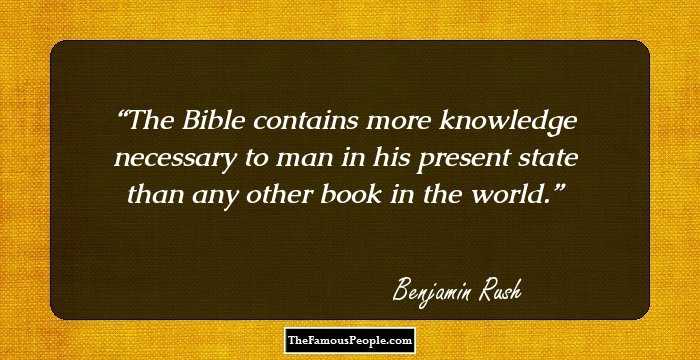 The Bible contains more knowledge necessary to man in his present state than any other book in the world. 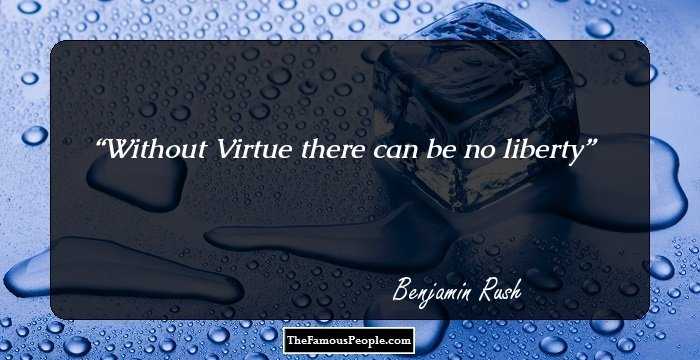 Without Virtue there can be no liberty 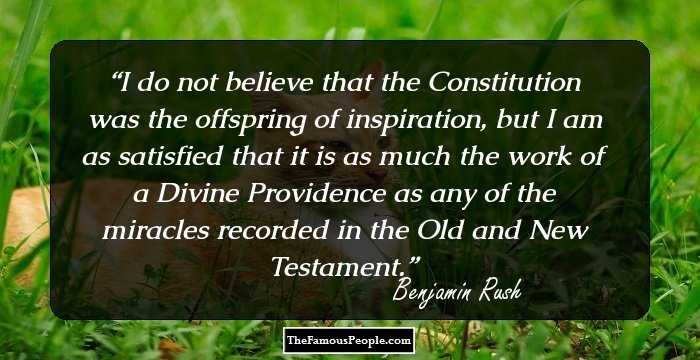 I do not believe that the Constitution was the offspring of inspiration, but I am as satisfied that it is as much the work of a Divine Providence as any of the miracles recorded in the Old and New Testament. 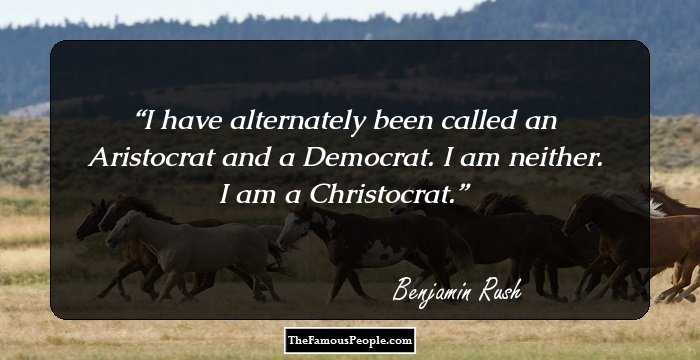 I have alternately been called an Aristocrat and a Democrat. I am neither. I am a Christocrat. 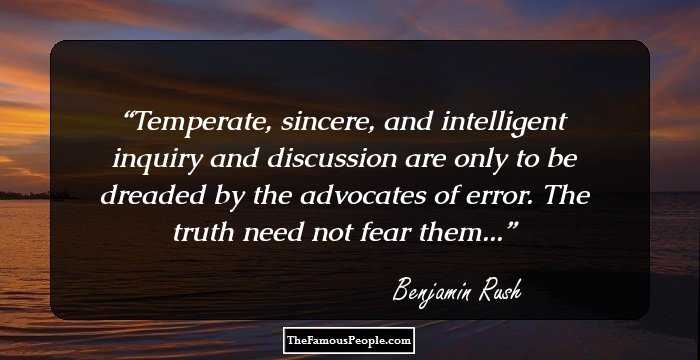 Temperate, sincere, and intelligent inquiry and discussion are only to be dreaded by the advocates of error. The truth need not fear them... 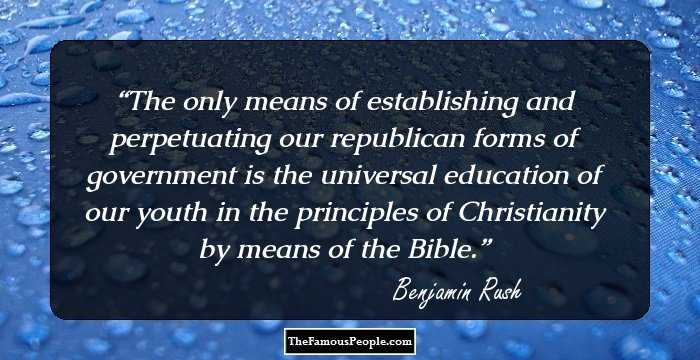 The only means of establishing and perpetuating our republican forms of government is the universal education of our youth in the principles of Christianity by means of the Bible. 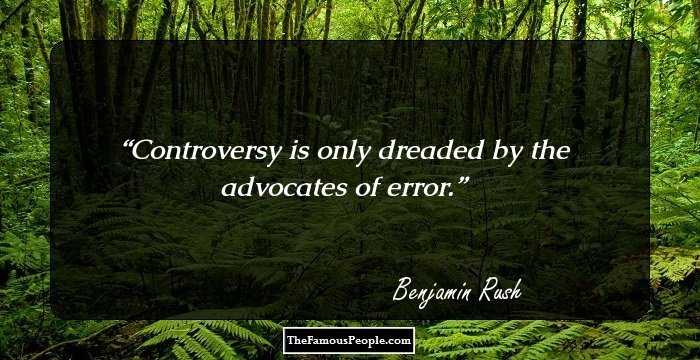 Controversy is only dreaded by the advocates of error.

...This large and expensive stock of drugs will be unnecessary. By...doses of...medicines...multiplying...combining them properly, 20 to 30 articles, aided by the common resources of the lancet, a garden, a kitchen, fresh air, cool water, exercise, will be sufficient to cure all the diseases that are at present under the power of medicine. 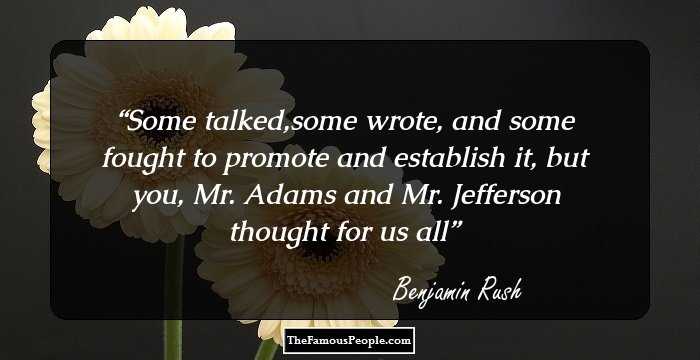 Some talked,some wrote, and some fought to promote and establish it, but you, Mr. Adams and Mr. Jefferson thought for us all 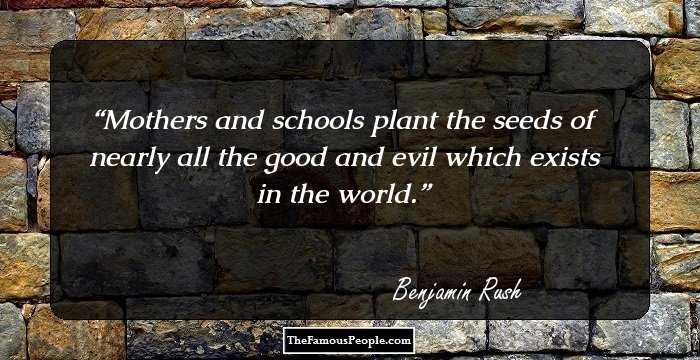 Mothers and schools plant the seeds of nearly all the good and evil which exists in the world. 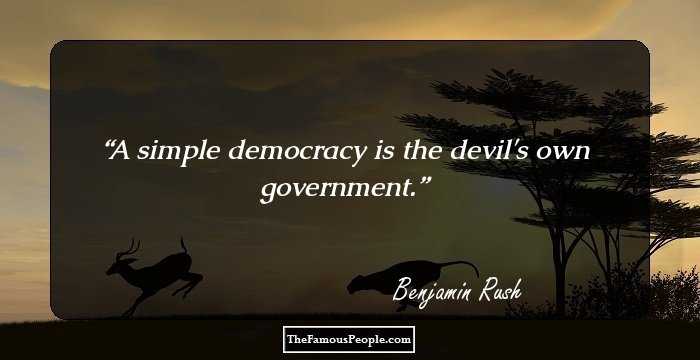 A simple democracy is the devil's own government.

If moral precepts alone could have reformed mankind, the mission of the Son of God into all the world would have been unnecessary. The perfect morality of the gospel rests upon the doctrine which, though often controverted has never been refuted: I mean the vicarious life and death of the Son of God. 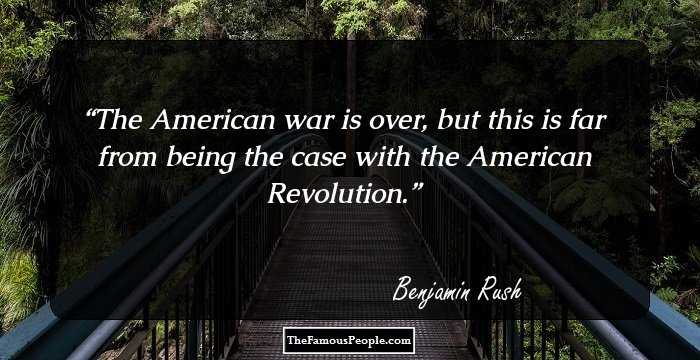 The American war is over, but this is far from being the case with the American Revolution.

The American war is over; but this far from being the case with the American revolution. On the contrary, nothing but the first act of the drama is closed. It remains yet to establish and perfect our new forms of government, and to prepare the principles, morals, and manners of our citizens for these forms of government after they are established and brought to perfection. 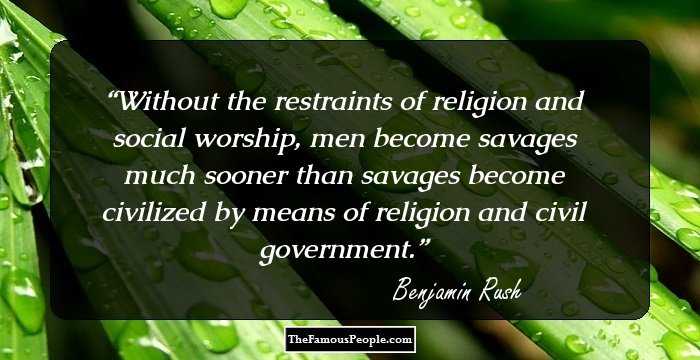 Let us show the world that a difference of opinion upon medical subjects is not incompatible with medical friendships; and in so doing, let us throw the whole odium of the hostility of physicians to each other upon their competition for business and money.

While the business of education in Europe consists in lectures upon the ruins of Palmyra and the antiquities of Herculaneum, or in disputes about Hebrew points, Greek particles, or the accent and quantity of the Roman language, the youth of America will be employed in acquiring those branches of knowledge which increase the conveniences of life, lessen human misery, improve our country, promote population, exalt the human understanding, and establish domestic social and political happiness.