Audrey Tautou is a renowned French actress. She was signed by an agent at the age of seventeen and she made her television debut at the age of eighteen. She made her film debut in 1999 with French romantic comedy âVenus Beauty Institute.â She bagged in the âCesar Award for Most Promising Actressâ and critical acclaim for the same. She earned global recognition when she starred in âAmelie,â which was not only commercially successful but earned critical acclaim. Some of her other notable works include, âThe Da Vinci Code,â âA Very Long Engagement,â âPriceless,â âCoco Avant Chanel,â and âDirty Pretty Things. Zoom through interesting sayings and quotes by Audrey Tautou, which have been excerpted from her movies, thoughts, public utterances, interviews, and dialogues. 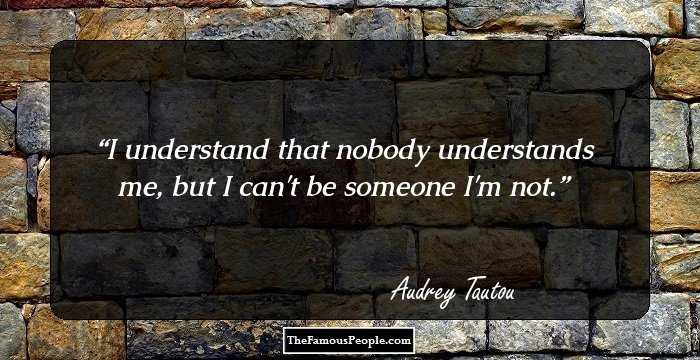 I understand that nobody understands me, but I can't be someone I'm not. 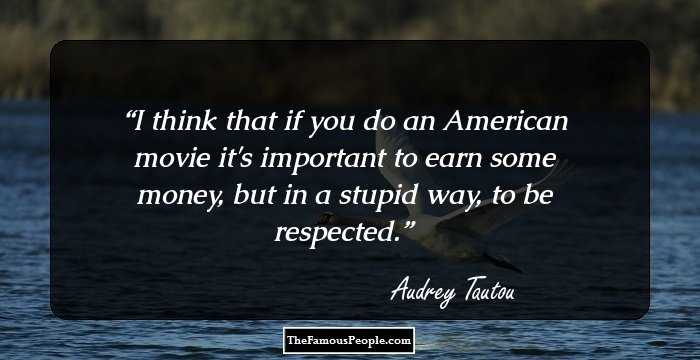 I think that if you do an American movie it's important to earn some money, but in a stupid way, to be respected. 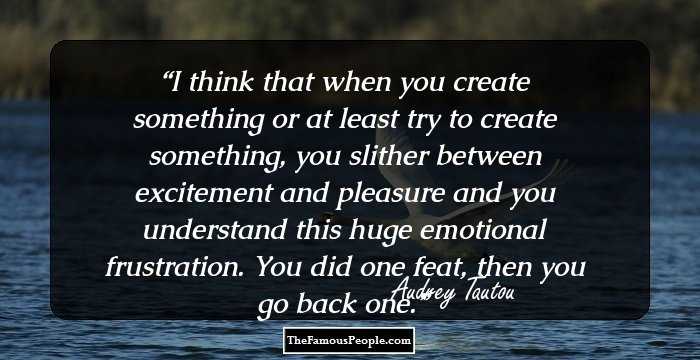 I think that when you create something or at least try to create something, you slither between excitement and pleasure and you understand this huge emotional frustration. You did one feat, then you go back one. 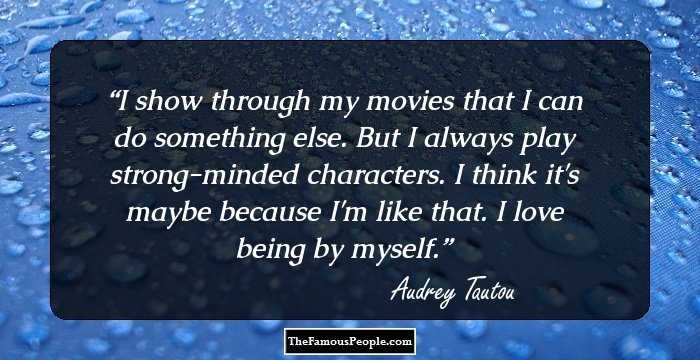 I show through my movies that I can do something else. But I always play strong-minded characters. I think it's maybe because I'm like that. I love being by myself. 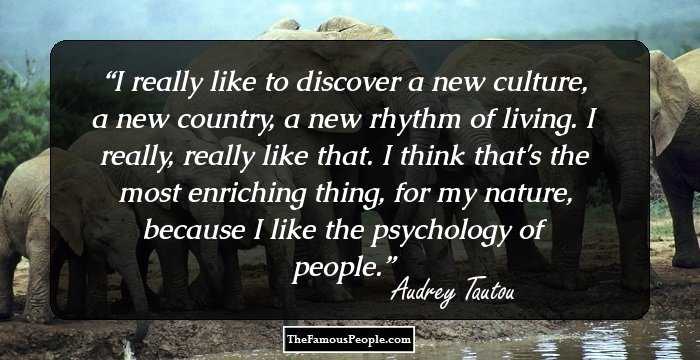 I really like to discover a new culture, a new country, a new rhythm of living. I really, really like that. I think that's the most enriching thing, for my nature, because I like the psychology of people. 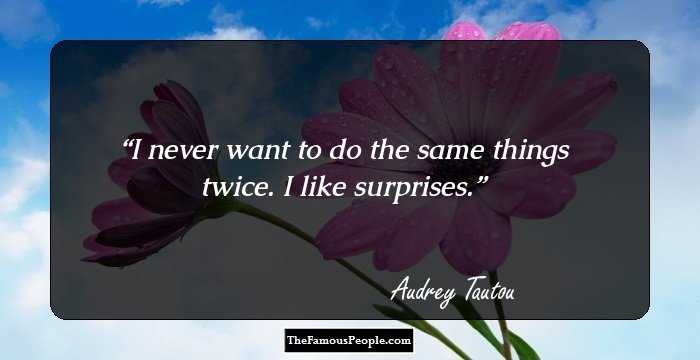 I never want to do the same things twice. I like surprises. 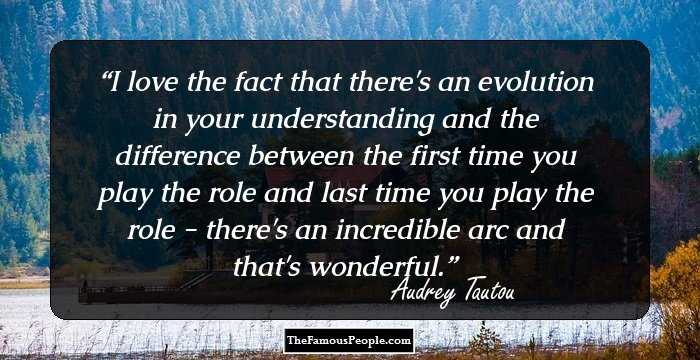 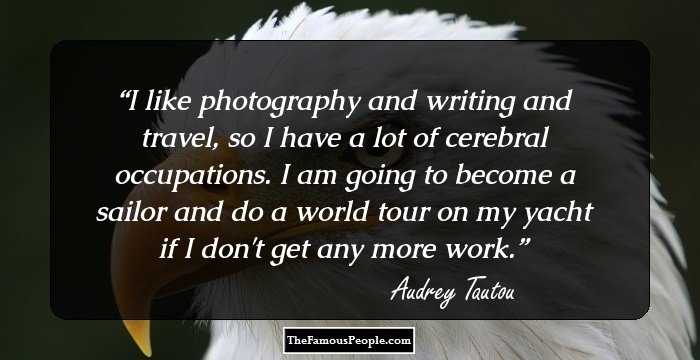 I like photography and writing and travel, so I have a lot of cerebral occupations. I am going to become a sailor and do a world tour on my yacht if I don't get any more work. 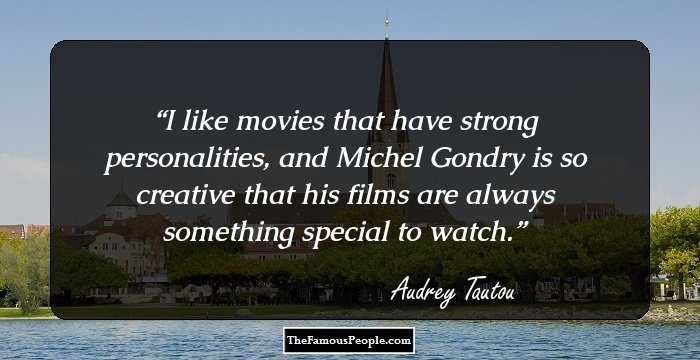 I like movies that have strong personalities, and Michel Gondry is so creative that his films are always something special to watch. 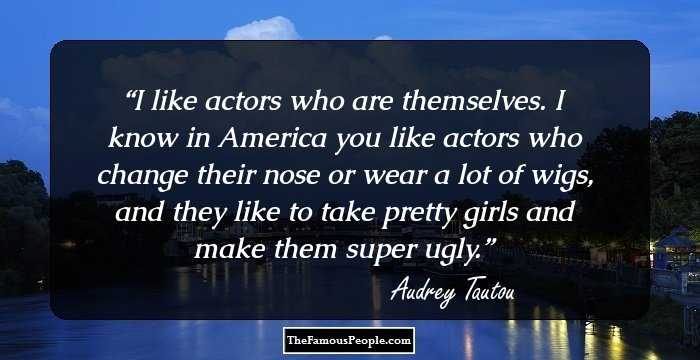 I like actors who are themselves. I know in America you like actors who change their nose or wear a lot of wigs, and they like to take pretty girls and make them super ugly. 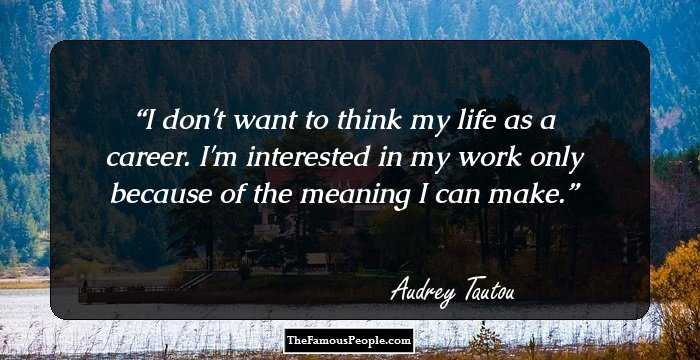 I don't want to think my life as a career. I'm interested in my work only because of the meaning I can make. 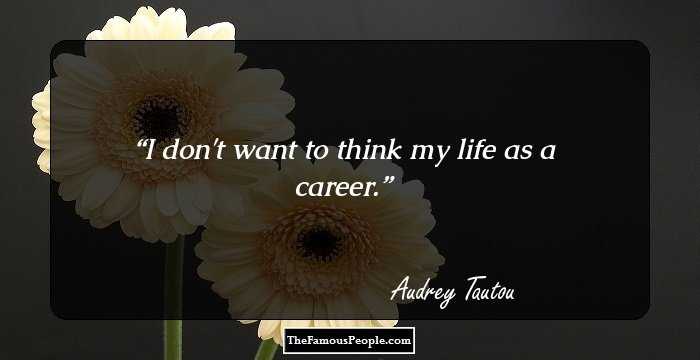 I don't want to think my life as a career. 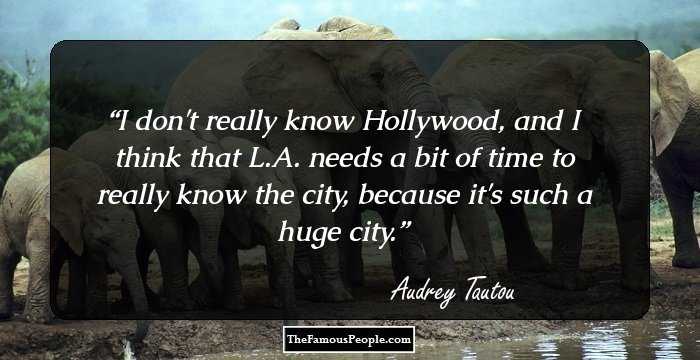 I don't really know Hollywood, and I think that L.A. needs a bit of time to really know the city, because it's such a huge city. 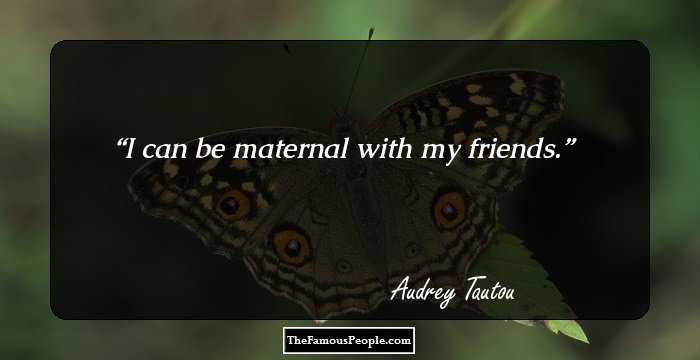 I can be maternal with my friends. 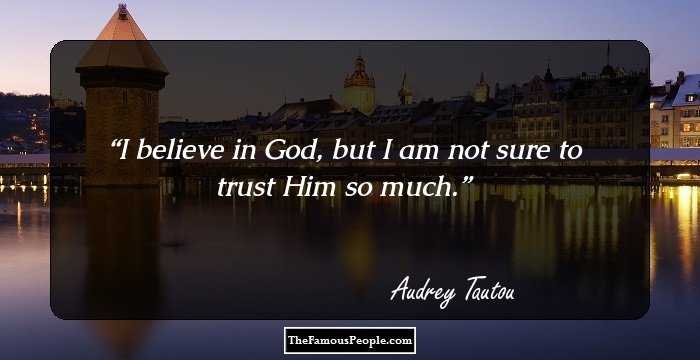 I believe in God, but I am not sure to trust Him so much. 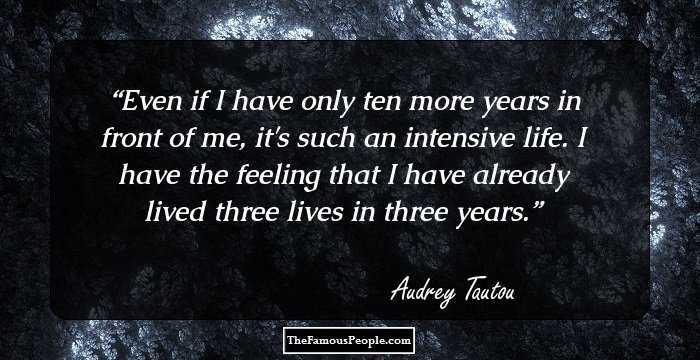 Even if I have only ten more years in front of me, it's such an intensive life. I have the feeling that I have already lived three lives in three years. 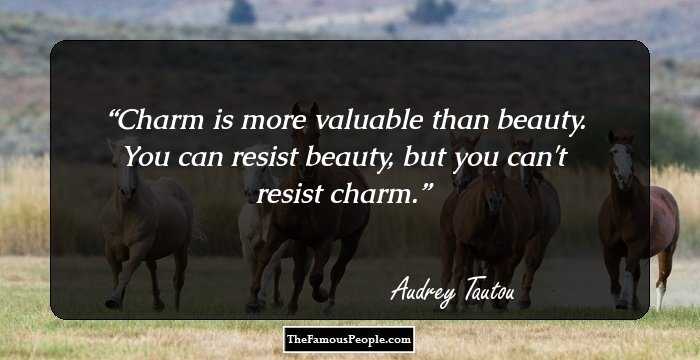 Charm is more valuable than beauty. You can resist beauty, but you can't resist charm. 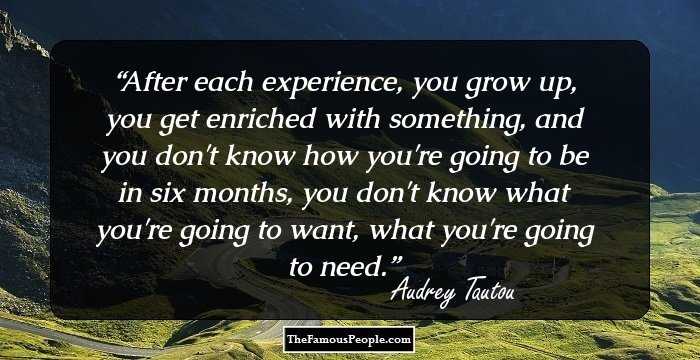 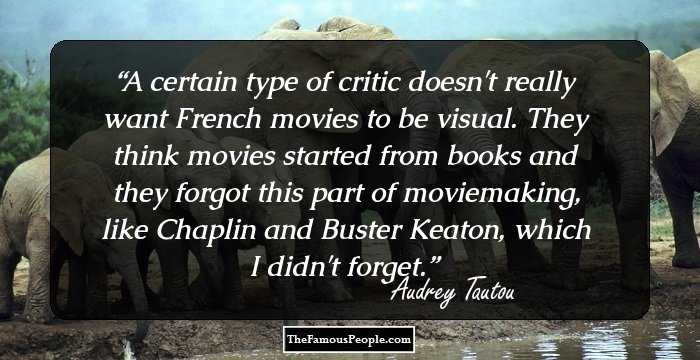 A certain type of critic doesn't really want French movies to be visual. They think movies started from books and they forgot this part of moviemaking, like Chaplin and Buster Keaton, which I didn't forget.

Coco Chanel really wanted to have freedom of a man, and at first the only way she could find that freedom was through the clothes. They freed her movement; she got rid of the corset. This imposed her not as a decoration but as a real personality. She invented a new way of seductions through these clothes.

I don't know where I'm going to be in three years. Because I have the feeling that the future is so full of possibilities, to stop being an actress, to do something else... for me, the future is just a huge bunch of discoveries.

I don't want to become more famous than what I am. I'm not interested in being in movies that are going to be shown all around the world and get a massive audience, so I'm interested in doing foreign movies as long as it stays an exceptional case and is exotic, but I don't want to go there [Hollywood].

I like the light that comes off metal shutters at siesta time in the summer, having a break from driving in the shops at motorway services, the odour of petrol at petrol stations, rolling down little slopes. I hate it when you tread in a puddle and the water soaks your socks.

I like to think in camera, but at the last minute the most important thing is that there is something happening between the actors. But good actors can have a lot of scenes going around them but sometimes it sort of helps the performance because it takes their mind off of who they are supposed to be.

I think when you're an adult you start to like the very things that make you different. If you obsess about some defect, you make it obvious to everyone, and suddenly everyone is staring at just that defect. It's always like that. The more you hide something, the more it shows. But when you accept your defect, suddenly no one on earth sees it anymore.