25 ASAP Rocky Quotes That Are Sure To Rock You

Rakim Mayers is a popular American singer, songwriter, rapper, actor, model and record producer, recognized by his stage name ASAP Rocky. He arrogated this moniker from his hip hop group A$AP Mob. In 2011, he received critical acclaim for his debut mixtape âLive.Love.A$APâ. He followed this album with âLong.Live.A$APâ and âAt.Long.Last.A$APâ and both the albums were received well. Both his albums debuted at number one on the âBillboard 200â. Besides this, Rocky has also directed some music videos. He is also a well-known record producer, producing under the sobriquet Lord Flacko. Rocky has become a hit especially among the young audiences not only because of his dope lyrics but also for his clothing and fashion. The renowned rapper raised his net worth by striking deals with companies like Adidas. Rocky believes in speaking his mind. Here is a collection of thoughts and views that the New York rapper has shared through his interviews, tweets, lyrics, songs, work and public utterances. Go through the compilation of thoughts and quotes by ASAP Rocky which are frequently being quoted extensively. Hope you enjoy his swag from his braids to his shoes. 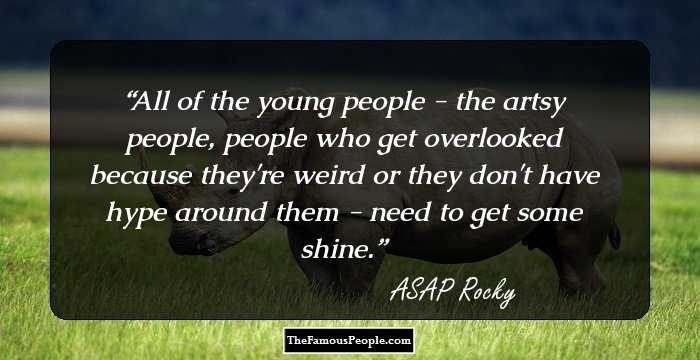 All of the young people - the artsy people, people who get overlooked because they're weird or they don't have hype around them - need to get some shine. 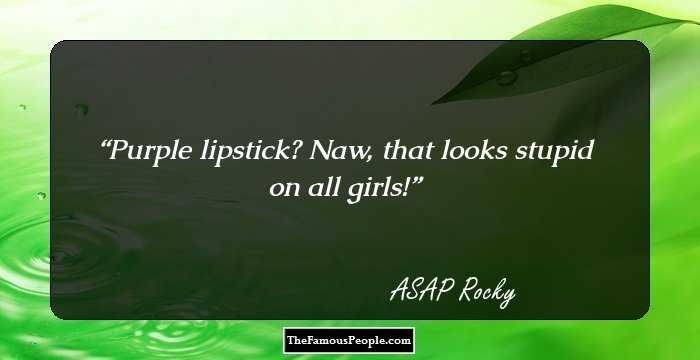 Purple lipstick? Naw, that looks stupid on all girls! 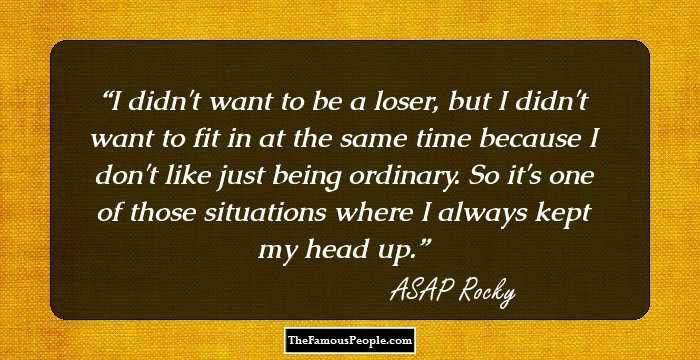 I didn't want to be a loser, but I didn't want to fit in at the same time because I don't like just being ordinary. So it's one of those situations where I always kept my head up. 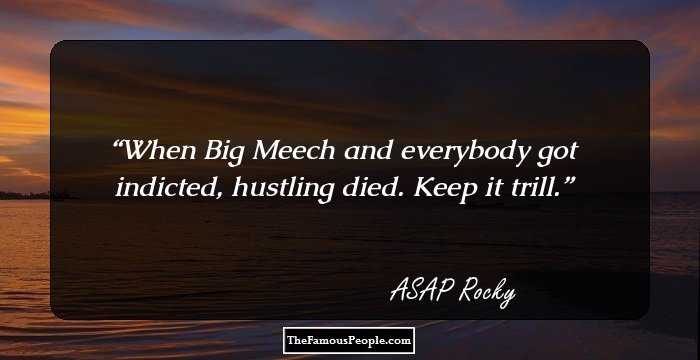 When Big Meech and everybody got indicted, hustling died. Keep it trill. 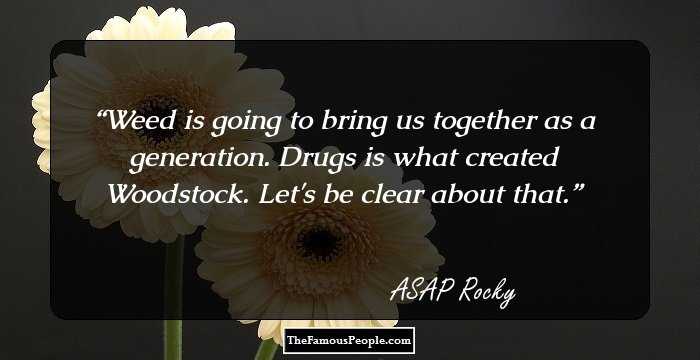 Weed is going to bring us together as a generation. Drugs is what created Woodstock. Let's be clear about that. 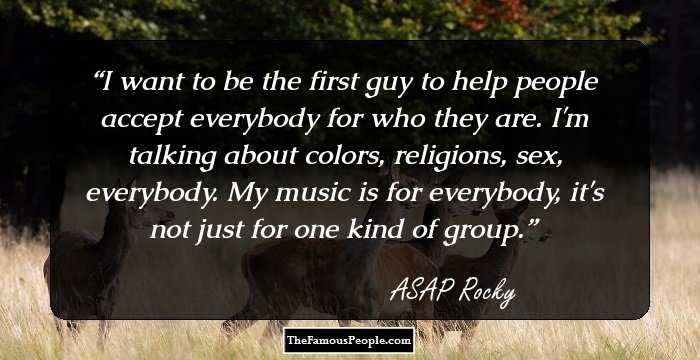 I want to be the first guy to help people accept everybody for who they are. I'm talking about colors, religions, sex, everybody. My music is for everybody, it's not just for one kind of group. 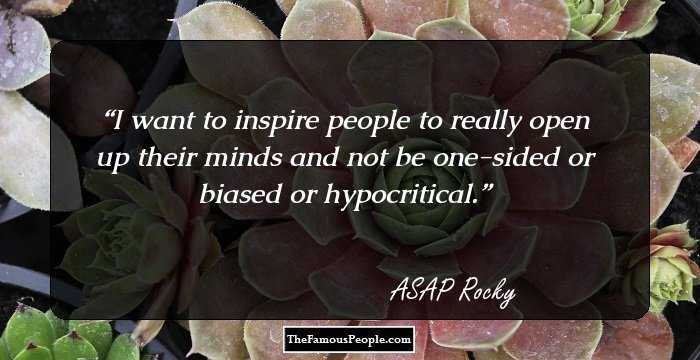 I want to inspire people to really open up their minds and not be one-sided or biased or hypocritical. 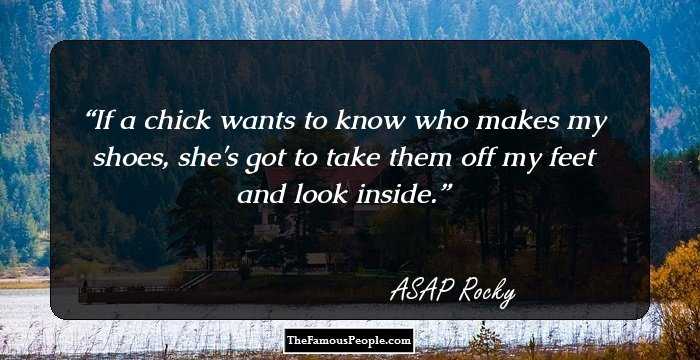 If a chick wants to know who makes my shoes, she's got to take them off my feet and look inside. 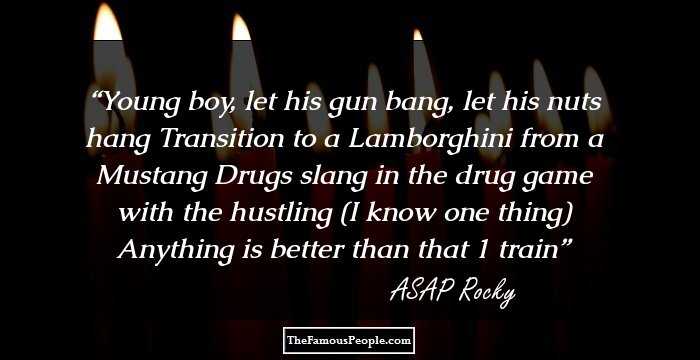 Young boy, let his gun bang, let his nuts hang Transition to a Lamborghini from a Mustang Drugs slang in the drug game with the hustling (I know one thing) Anything is better than that 1 train 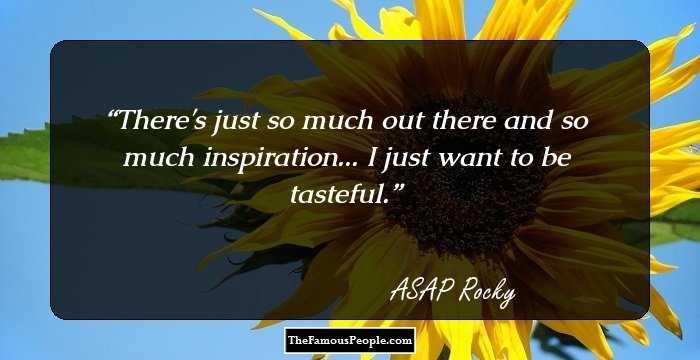 There's just so much out there and so much inspiration... I just want to be tasteful. 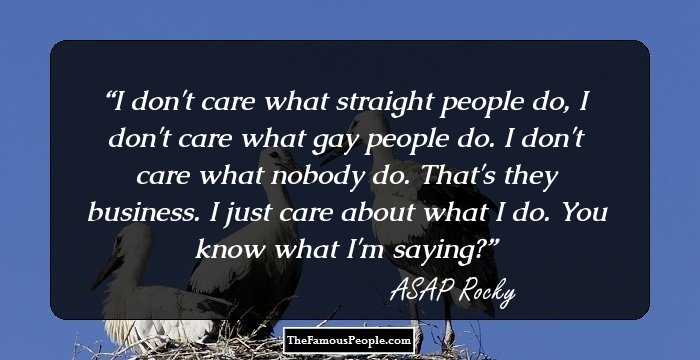 You Business I
ASAP Rocky 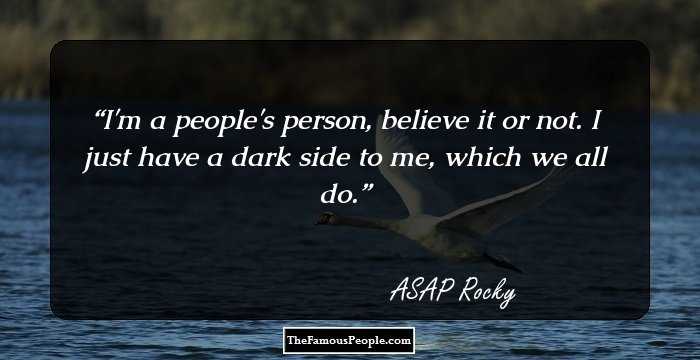 I'm a people's person, believe it or not. I just have a dark side to me, which we all do.

Me Believe I
ASAP Rocky 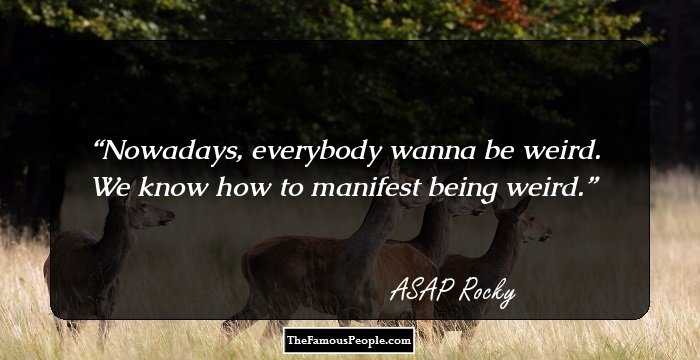 Nowadays, everybody wanna be weird. We know how to manifest being weird. 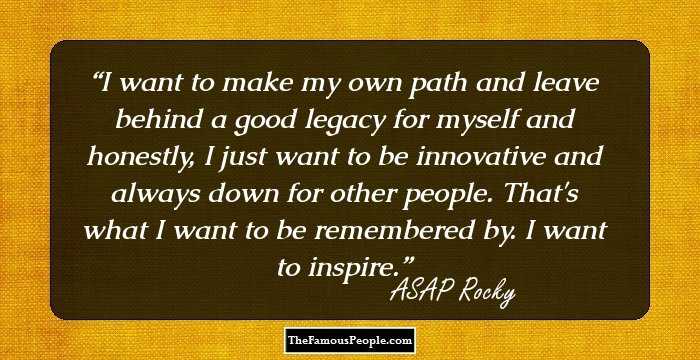 I want to make my own path and leave behind a good legacy for myself and honestly, I just want to be innovative and always down for other people. That's what I want to be remembered by. I want to inspire. 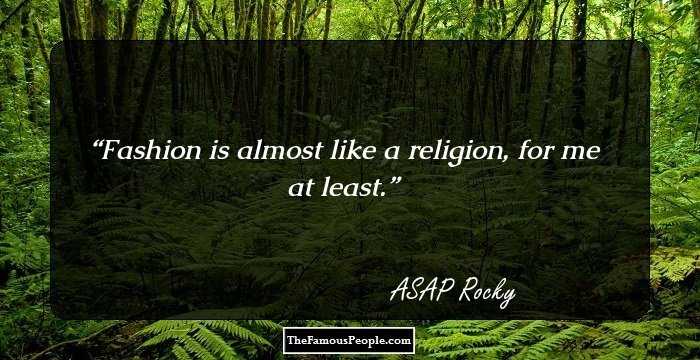 Fashion is almost like a religion, for me at least. 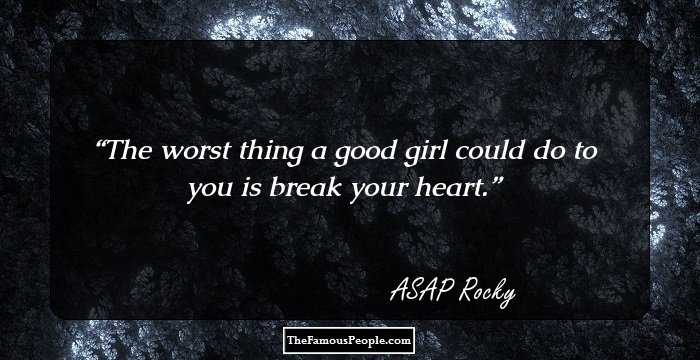 The worst thing a good girl could do to you is break your heart. 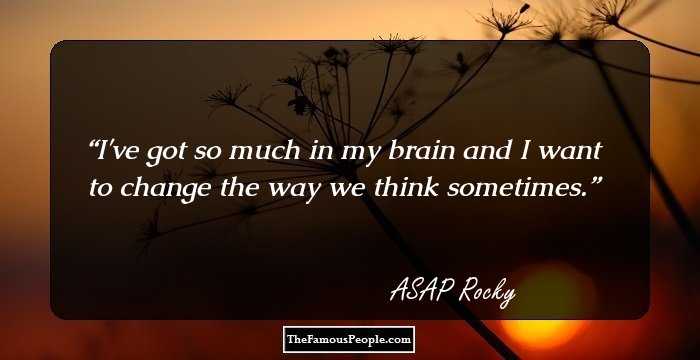 I've got so much in my brain and I want to change the way we think sometimes. 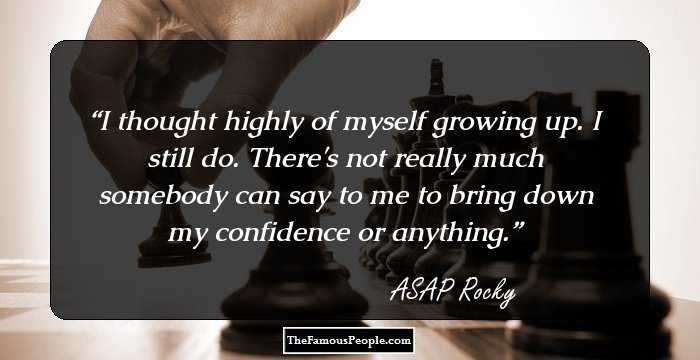 I thought highly of myself growing up. I still do. There's not really much somebody can say to me to bring down my confidence or anything.

Me I
ASAP Rocky 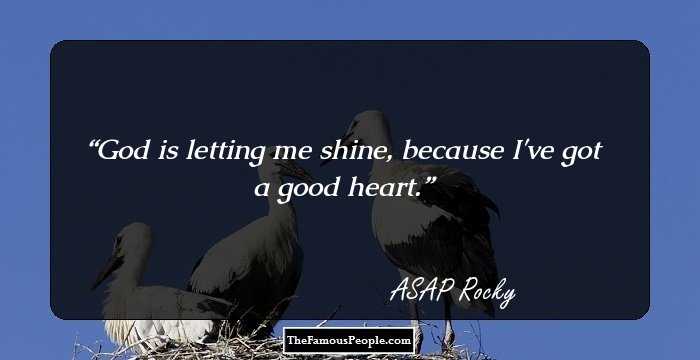 God is letting me shine, because I've got a good heart. 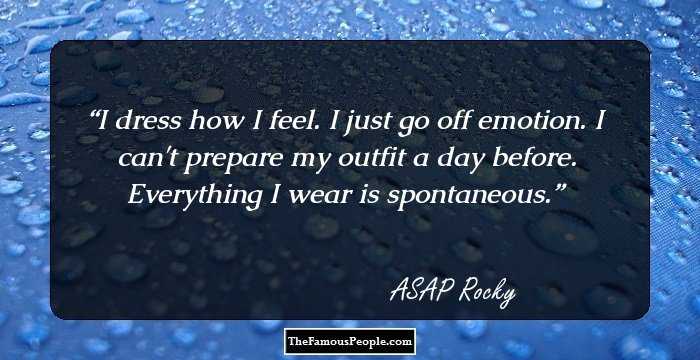 I dress how I feel. I just go off emotion. I can't prepare my outfit a day before. Everything I wear is spontaneous. 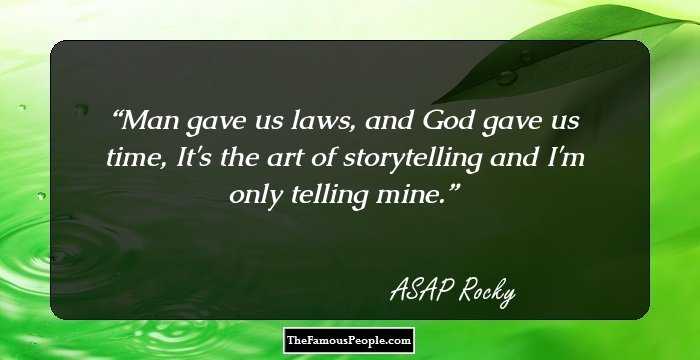 Man gave us laws, and God gave us time, It's the art of storytelling and I'm only telling mine.

We could fight the fuss till we get like friends, Or somebody bite the dust and we split like ends. Even in our wildest moments, girl, I'm on it cause you're worth it. Practice makes perfect, so we fightin' for a purpose.

Everybody should be able to enjoy their life, because you only live once. So I just want to get it all out there and be the best role model that I can be, if people want to put me in that kind of predicament. I mean, I didn't ask to be a role model, because I'm not perfect.

You Life Me I
ASAP Rocky

You ready? I have gold teeth, I have braids, I'm wearing Rick Owens moon boots, I have rips in my denim, a biker vest, I love artsy girls, my favourite artists are Jimi Hendrix and John Lennon. I'm obsessed with being different.

You Love I
ASAP Rocky

I strive for perfection, but Im not perfect. But what I can say is my morals are totally different than any other 24-year-old rapper my age now. I look at life totally different. A whole other aspect. I have different views and morals on life in general. And opinions.