Famous As: French Author, Poet and Member of the National Assembly for SaÃ´ne-Et-Loire from 1849 to 1851
Born On: October 21, 1790
Died On: February 28, 1869
Born In: MÃ¢con, France
Died At Age: 78
Alphonse de Lamartine was a renowned poet, historian, and statesman known as one of the influential figures of the âRomantic Movement in French Literatureâ. During the initial days of his career, he traveled a lot to write many poetic verses. This helped him publish his first poetry collection titled âLes MÃ©ditations PoÃ©tiquesâ which turned out to be a huge success as it brought comprehensive change in the French Literature. He even joined the diplomatic corps as a secretary to the French Embassy at Naples. He further went on to write a couple of books including âMeditations PoÃ©tiquesâ before being awarded as the âLegion of Honorâ by Charles X. His reputation as a poet inducted him into the âFrench Academyâ where he looked into the problems faced by the French language. He further traveled to various countries including Syria and during this period the death of his daughter made him leave diplomatic services and turn towards politics for the betterment of the society. He actively participated in politics and also published some of his great books including his most notable work titled âRecueillements PoÃ©tiquesmeâ. He was even elected as the minister of foreign affairs in the new provisional government but with the return of Napoleon he was compelled to return to writing for survival. He is noted for his insightful thoughts on power, politics, love, life, enchanted, heart, Islam, Muhammad, God, soul, human and truth. The below collection of Alphonse de Lamartineâs most famous quotes have been excerpted from his writings, poems, books and thoughts. We bring to you a collection of sayings and quotations by Alphonse de Lamartine.
Listed In:
Writers 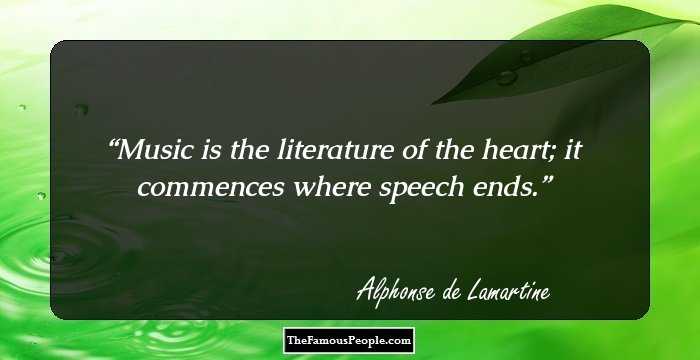 Music is the literature of the heart; it commences where speech ends. 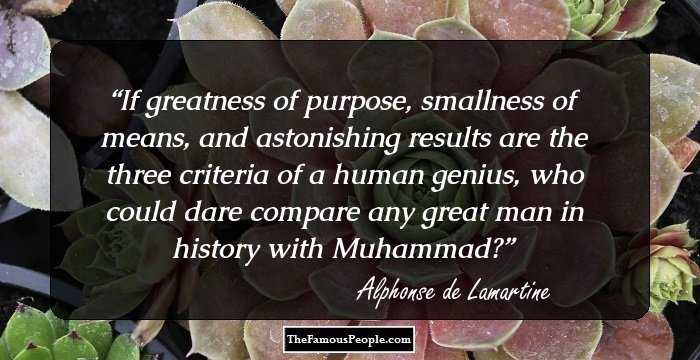 If greatness of purpose, smallness of means, and astonishing results are the three criteria of a human genius, who could dare compare any great man in history with Muhammad? 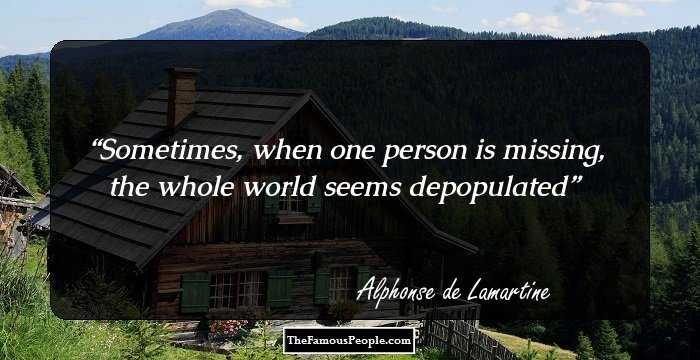 Sometimes, when one person is missing, the whole world seems depopulated 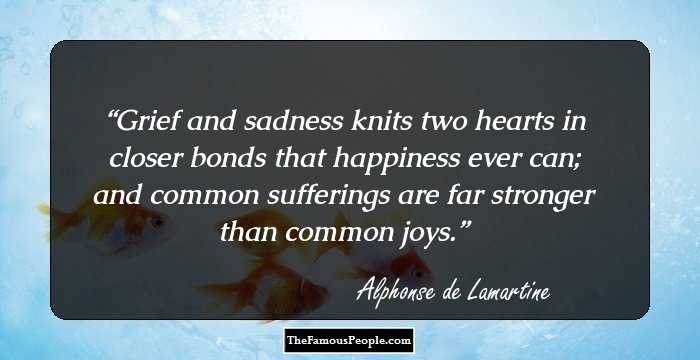 Grief and sadness knits two hearts in closer bonds that happiness ever can; and common sufferings are far stronger than common joys. 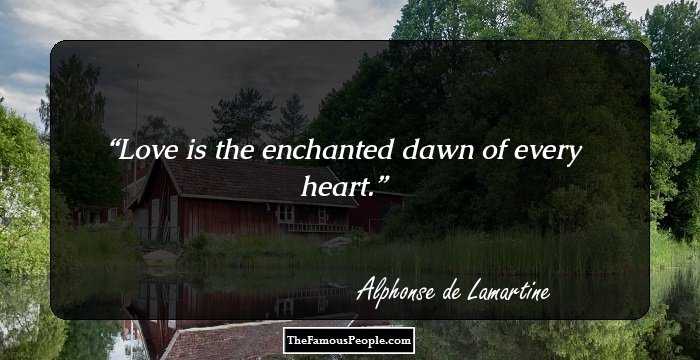 Love is the enchanted dawn of every heart. 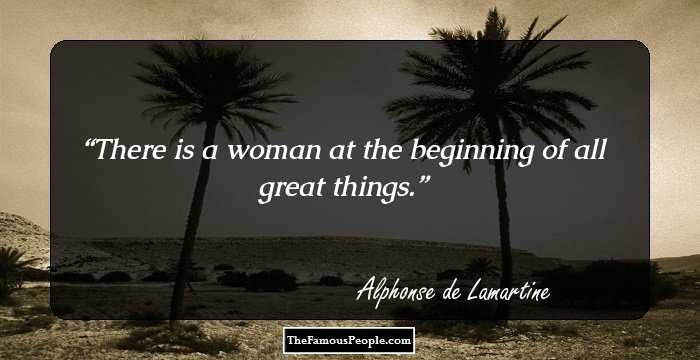 There is a woman at the beginning of all great things. 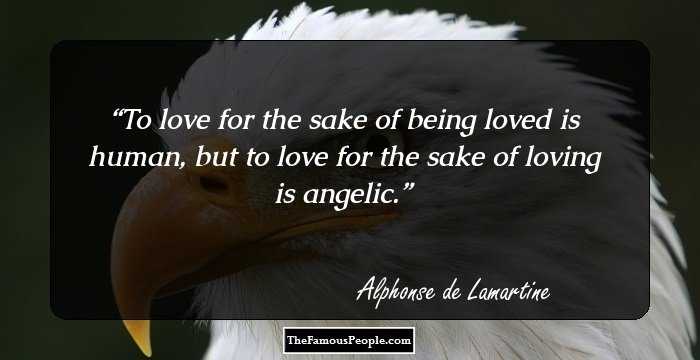 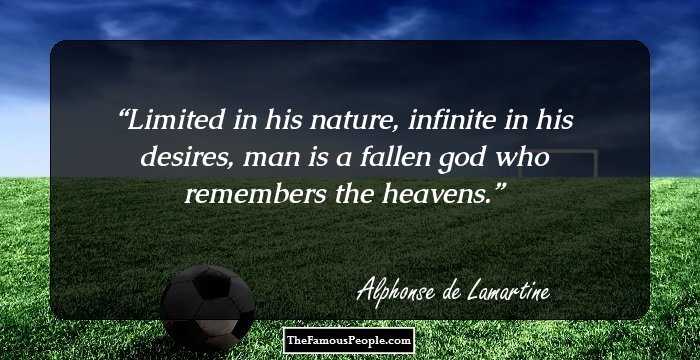 Limited in his nature, infinite in his desires, man is a fallen god who remembers the heavens. 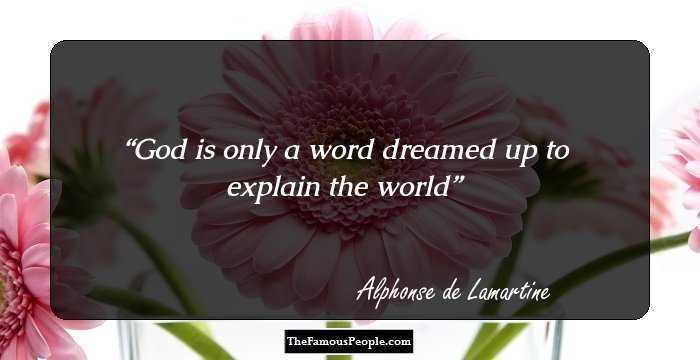 God is only a word dreamed up to explain the world 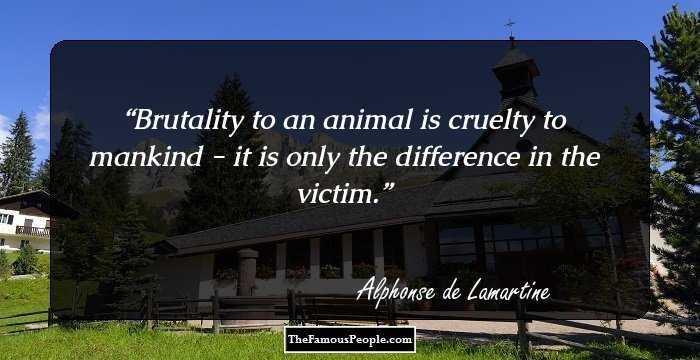 Brutality to an animal is cruelty to mankind - it is only the difference in the victim. 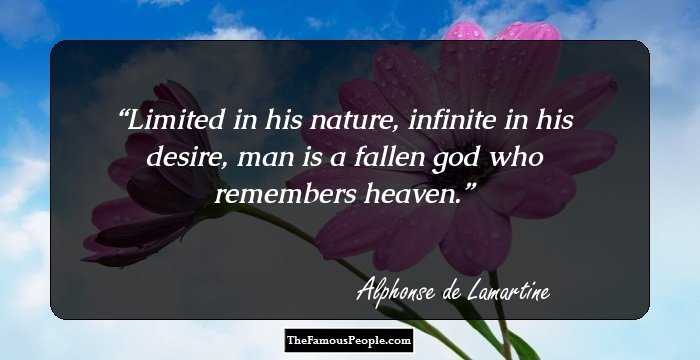 Limited in his nature, infinite in his desire, man is a fallen god who remembers heaven. 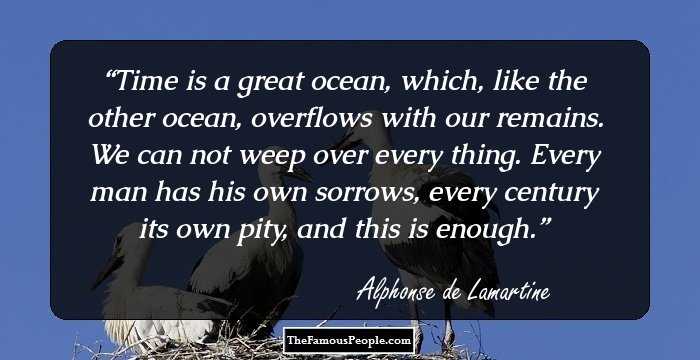 Time is a great ocean, which, like the other ocean, overflows with our remains. We can not weep over every thing. Every man has his own sorrows, every century its own pity, and this is enough. 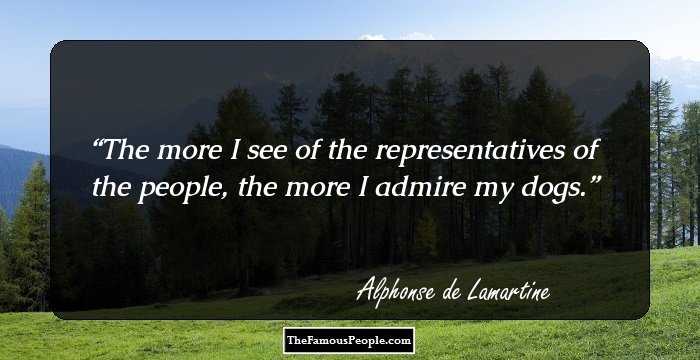 The more I see of the representatives of the people, the more I admire my dogs. 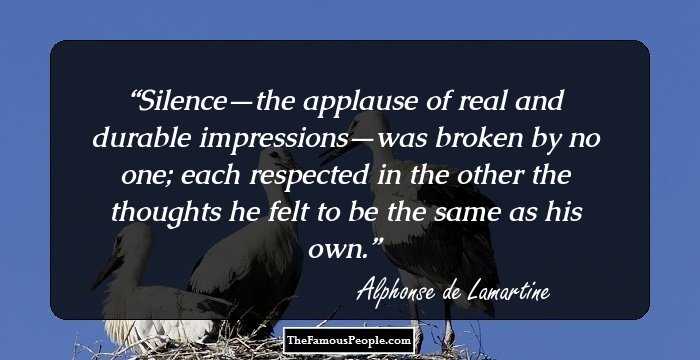 Silenceâthe applause of real and durable impressionsâwas broken by no one; each respected in the other the thoughts he felt to be the same as his own. 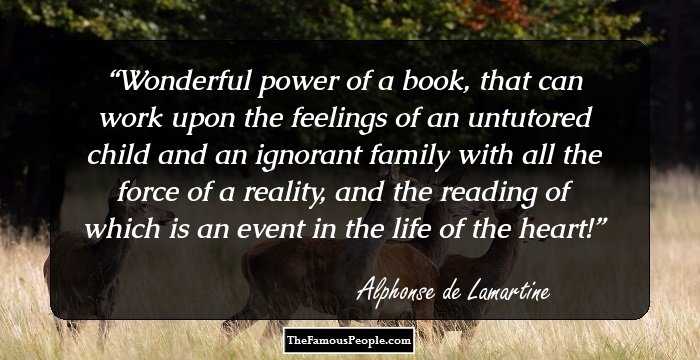 Wonderful power of a book, that can work upon the feelings of an untutored child and an ignorant family with all the force of a reality, and the reading of which is an event in the life of the heart! 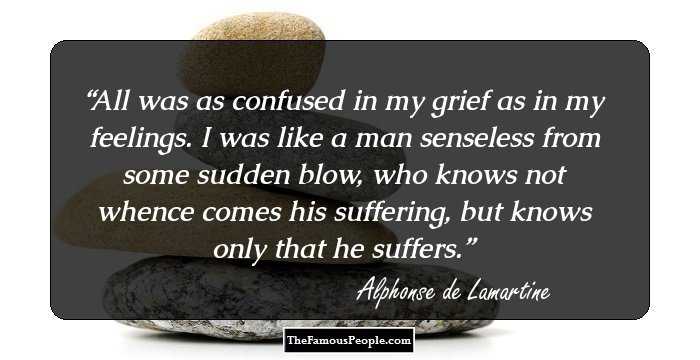 All was as confused in my grief as in my feelings. I was like a man senseless from some sudden blow, who knows not whence comes his suffering, but knows only that he suffers. 31 Top Peter Tosh Quotes That You Must Know 15 Famous Quotes By Joey Ramone That Will Rock Your World