Famous As: Author of Many Non-Fiction Books
Born On: August 5, 1929
Died On: September 23, 2019
Born In: London, England
Died At Age: 90
Al Alvarez is an illustrious English novelist, critic, poet, and essayist. Born in London, he pursued his education from âThe Hall School,â and âCorpus Christi College, Oxford.â In his late twenties he became a full-time writer after teaching briefly at Oxford. He has authored a number of non-fiction books and is particularly renowned for âThe Savage God,â his study of suicide. In 1999, he published his biography titled, âWhere Did It All Go?â He has expressed his thoughts on various subjects including his hobbies of poker, divorce, mountaineering, loneliness, mourning, solitary, self-reliance, oil industry, dreams, and other subjects. Some of his sought-after works include, âFeeding The Rat,â âOffshore,â âLie After Marriage,â âThe New Poetry,â âPond Life,â âNightâ etc. We bring to you a treasure trove of insightful quotations and sayings by Al Alvarez. Zoom through the interesting collection of thoughts and quotes by Al Alvarez and get inspired.
Listed In:
Writers
Poets 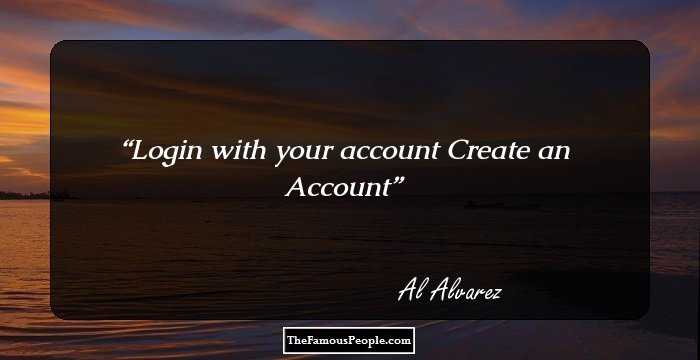 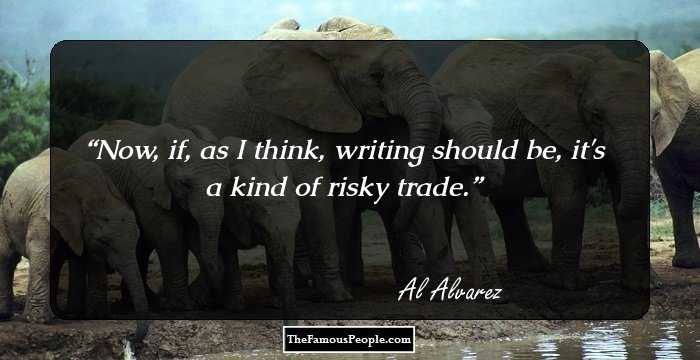 Now, if, as I think, writing should be, it's a kind of risky trade. 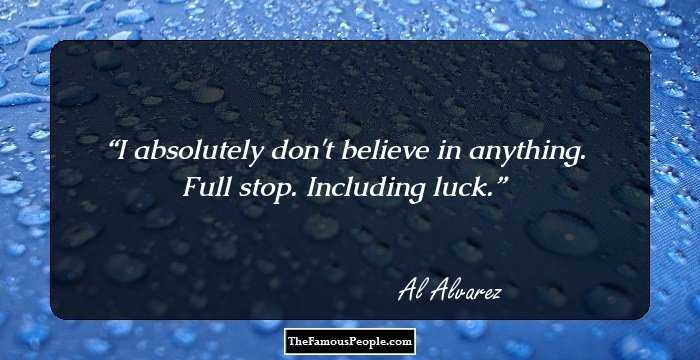 I absolutely don't believe in anything. Full stop. Including luck. 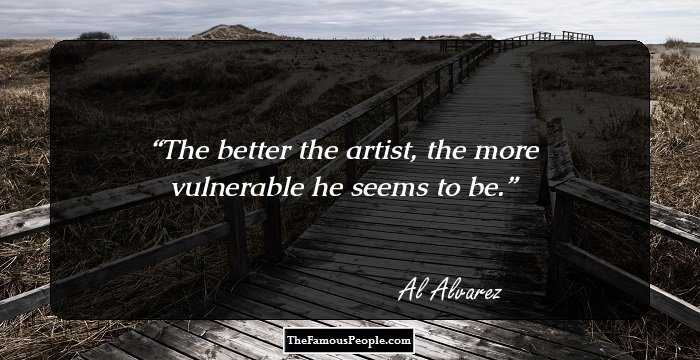 The better the artist, the more vulnerable he seems to be. 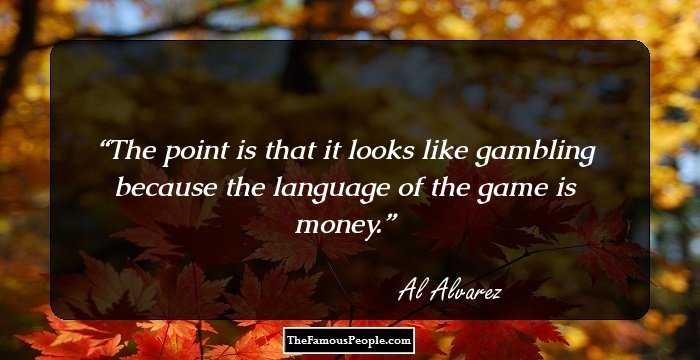 The point is that it looks like gambling because the language of the game is money. 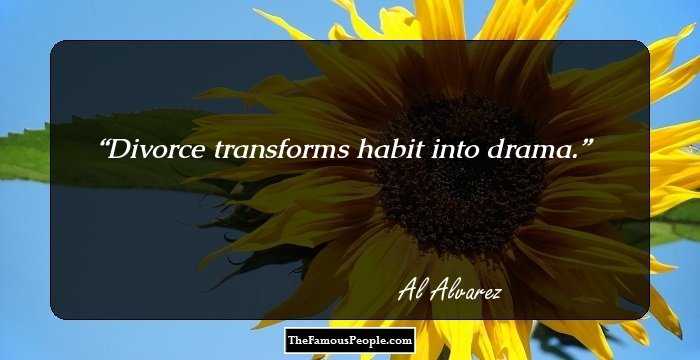 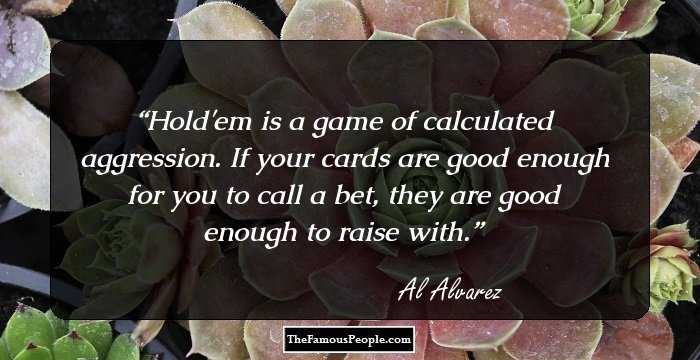 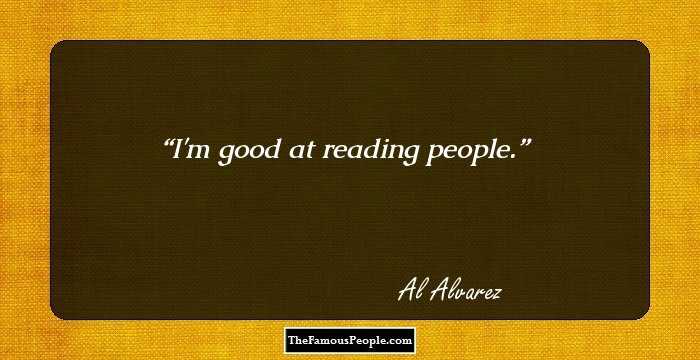 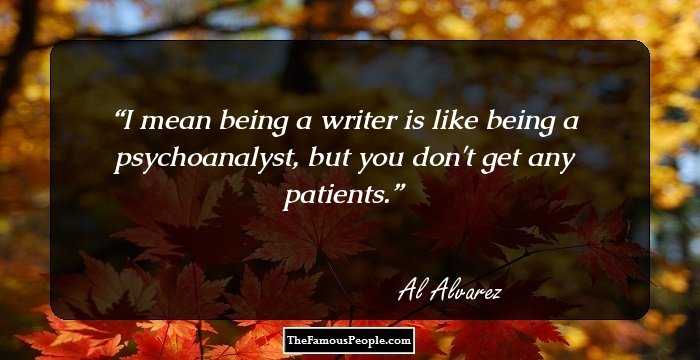 I mean being a writer is like being a psychoanalyst, but you don't get any patients. 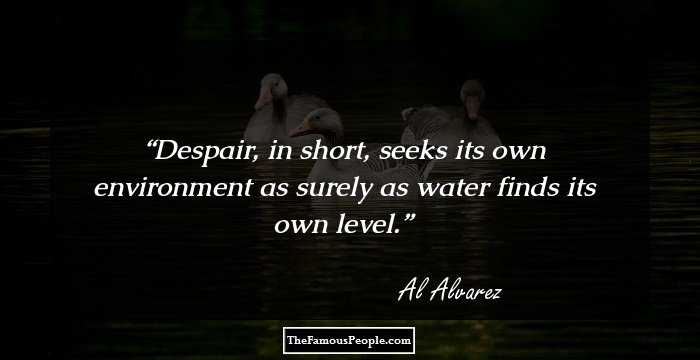 Despair, in short, seeks its own environment as surely as water finds its own level. 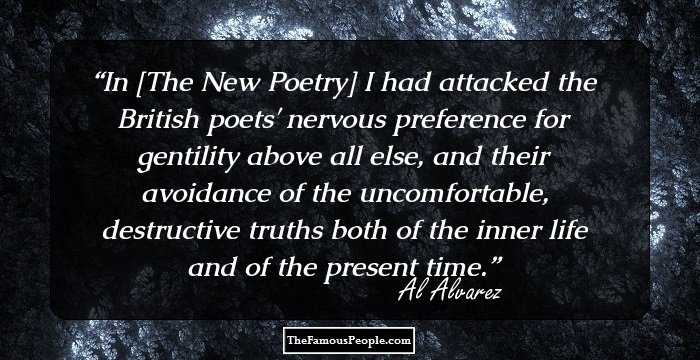 In [The New Poetry] I had attacked the British poets' nervous preference for gentility above all else, and their avoidance of the uncomfortable, destructive truths both of the inner life and of the present time. 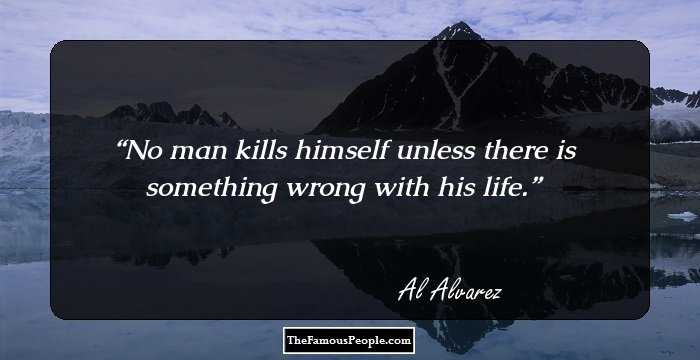 No man kills himself unless there is something wrong with his life. 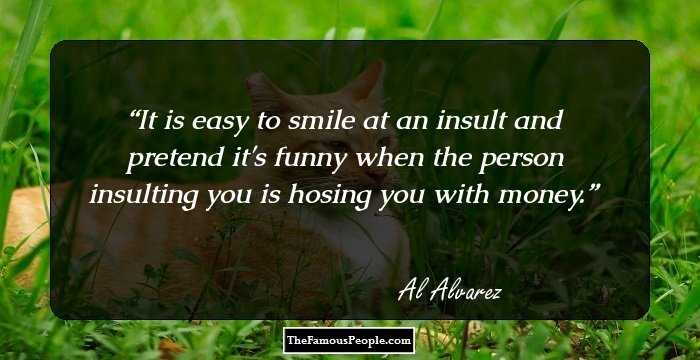 It is easy to smile at an insult and pretend it's funny when the person insulting you is hosing you with money.

Despite the hundreds of attempts, police terror and the concentration camps have proved to be more or less impossible subjects for the artist; since what happened in them was beyond the imagination, it was therefore also beyond art and all those human values on which art is traditionally based.

To put yourself into a situation where a mistake cannot necessarily be recouped, where the life you lose may be your own, clears the head wonderfully. It puts domestic problems back into proportion and adds an element of seriousness to your drab, routine life. Perhaps this is one reason why climbing has become increasingly hard as society has become increasingly, disproportionately, coddling.

Mass democracy, mass morality and the mass media thrive independently of the individual, who joins them only at the cost of at least a partial perversion of his instincts and insights. He pays for his social ease with what used to be called his soul - his discriminations, his uniqueness, his psychic energy, his self.

The real resistance now is to an art which forces its audience to recognize and accept imaginatively, in their nerve ends, not the facts of life but the facts of death and violence: absurd, random, gratuitous, unjustified, and inescapably part of the society we have created.

Twentieth-century art may start with nothing, but it flourishes by virtue of its belief in itself, in the possibility of control over what seems essentially uncontrollable, in the coherence of the inchoate, and in its ability to create its own values.

Each sporadic burst of work, each minor success and disappointment, each moment of calm and relaxation, seemed merely a temporary halt on my steady descent through layer after layer of depression, like an elevator stopping for a moment on the way down to the basement.

When neither high purpose nor the categorical imperatives of religion will do, the only argument against suicide is life itself. You pause and attend: the heart beats in your chest; outside, the trees are thick with new leaves, a swallow dips over them, the light moves, people are going about their business.