Famous As: Solo R&B and Hip-Hop Artist to Hold Both No.1 & No.2 Position at Billboard Hot 100 Simultaneously Twice
Born On: April 16, 1973
Born In: St. Louis, Missouri, United States
Founder / Co Founder: Konvict Muzik, KonLive Distribution
Age: 49 Years
Akon is a celebrated American-born Senegalese songwriter, singer, actor, record producer and businessman who shot to fame with âLocked Upâ, which was the first single from his debut album âTroubleâ. He followed up this success with his second album âKonvictedâ which bagged in two Grammy nominations. Akon is also the founder of two buoyant record labels namely âKon Live Distributionsâ and âKonvict Muzikâ. He also holds the record for being the first solo artist who simultaneously held the number one and two spots on the Billboard Hot 100 Chart two times. Akon has also recorded songs in Spanish, Tamil and Hindi. He also holds the âGuinness Book Of World Recordsâ for being the best-selling artist for master ringtones in the world. Here is a compilation of famous lines, words, thoughts, opinions and views that the renowned artist has shared through his songs, lyrics, writings, music, tweets and interviews. Read through the quotes and sayings by Akon which are sure to strike a chord with you.
Listed In:
Musicians
Singers 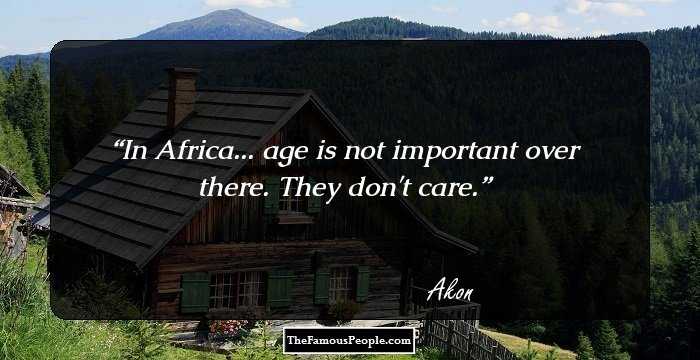 In Africa... age is not important over there. They don't care. 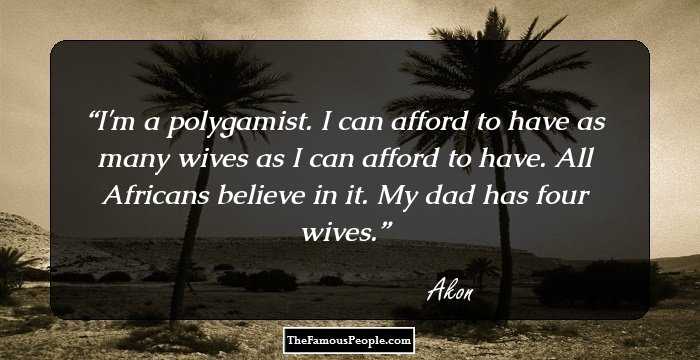 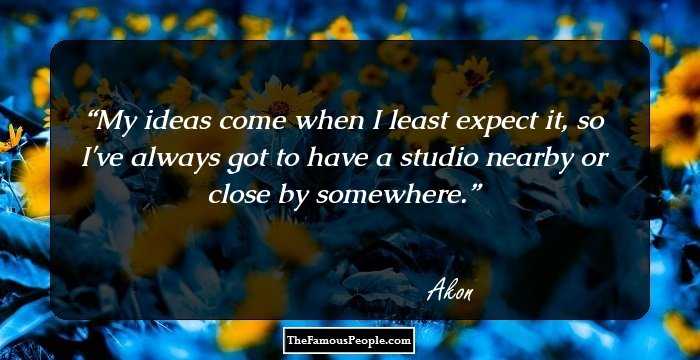 My ideas come when I least expect it, so I've always got to have a studio nearby or close by somewhere. 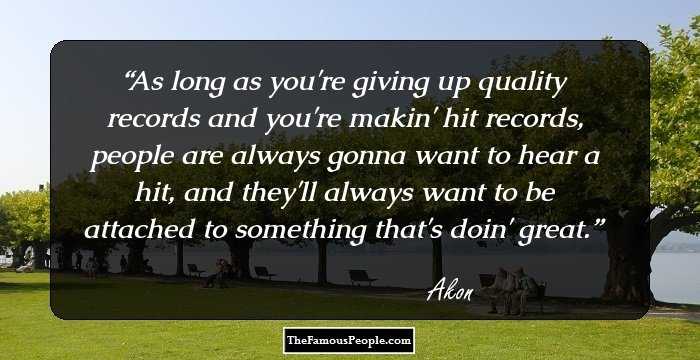 As long as you're giving up quality records and you're makin' hit records, people are always gonna want to hear a hit, and they'll always want to be attached to something that's doin' great. 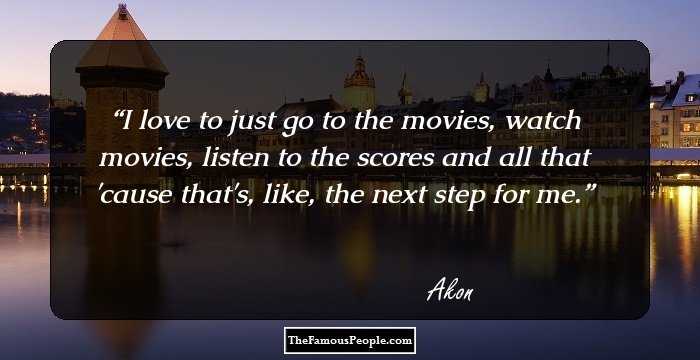 I love to just go to the movies, watch movies, listen to the scores and all that 'cause that's, like, the next step for me. 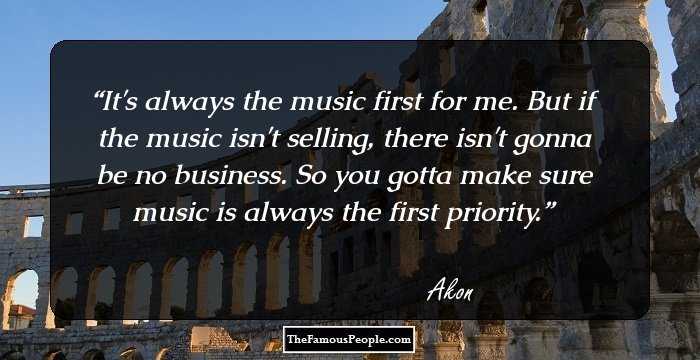 It's always the music first for me. But if the music isn't selling, there isn't gonna be no business. So you gotta make sure music is always the first priority.

You Me Business Music
Akon 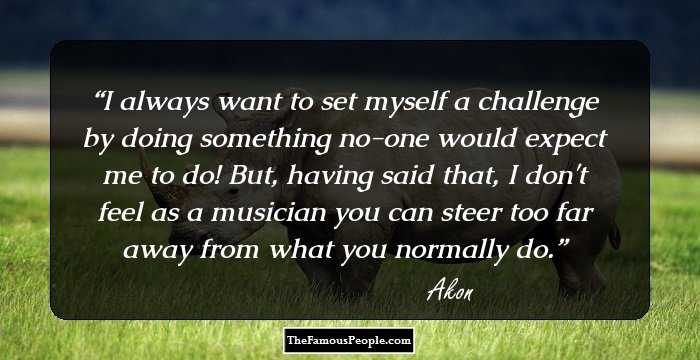 I always want to set myself a challenge by doing something no-one would expect me to do! But, having said that, I don't feel as a musician you can steer too far away from what you normally do.

You Me I
Akon 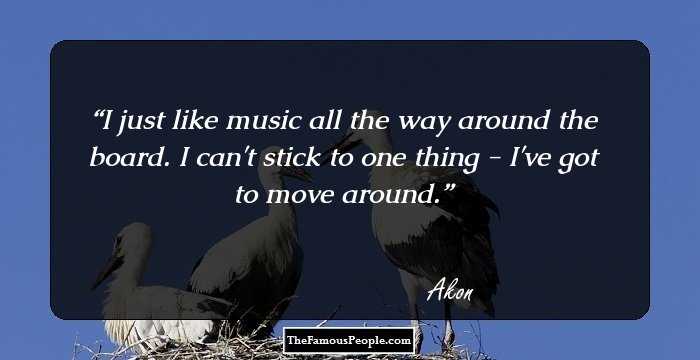 I just like music all the way around the board. I can't stick to one thing - I've got to move around. 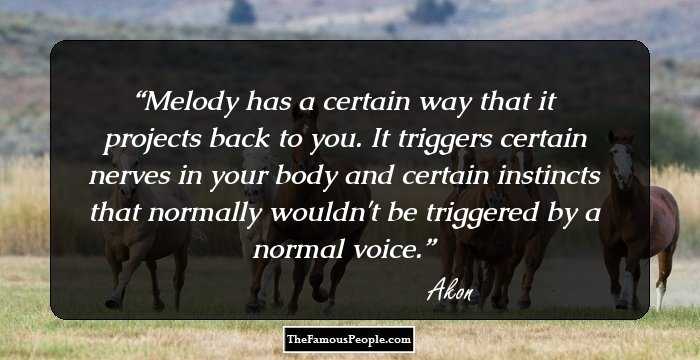 Melody has a certain way that it projects back to you. It triggers certain nerves in your body and certain instincts that normally wouldn't be triggered by a normal voice. 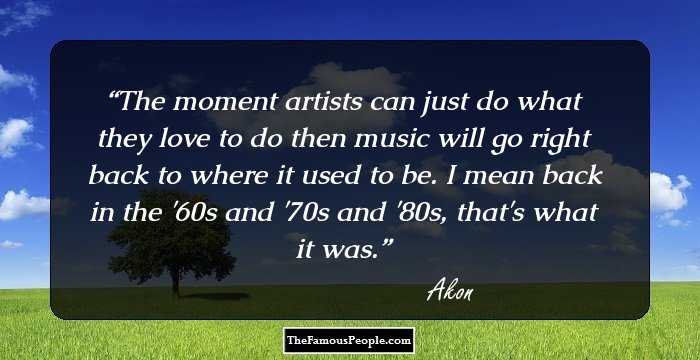 The moment artists can just do what they love to do then music will go right back to where it used to be. I mean back in the '60s and '70s and '80s, that's what it was.

Love Will Music I
Akon 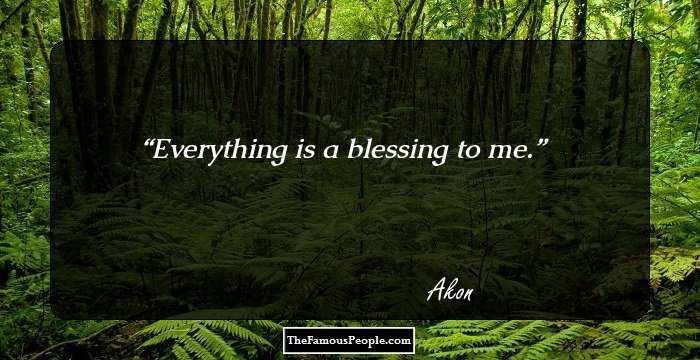 Everything is a blessing to me. 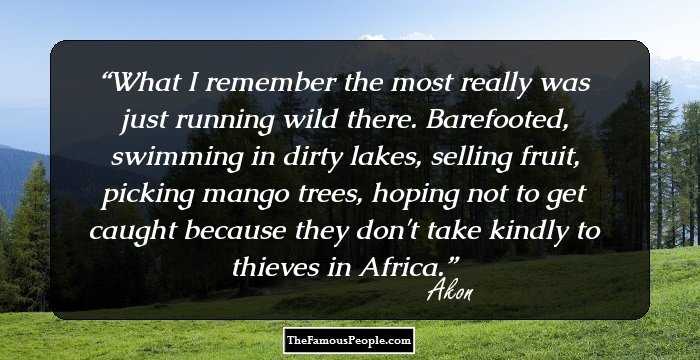 What I remember the most really was just running wild there. Barefooted, swimming in dirty lakes, selling fruit, picking mango trees, hoping not to get caught because they don't take kindly to thieves in Africa. 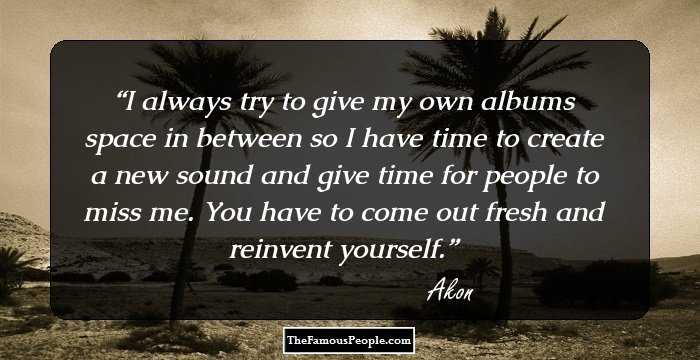 I always try to give my own albums space in between so I have time to create a new sound and give time for people to miss me. You have to come out fresh and reinvent yourself.

You Me Time Yourself I
Akon 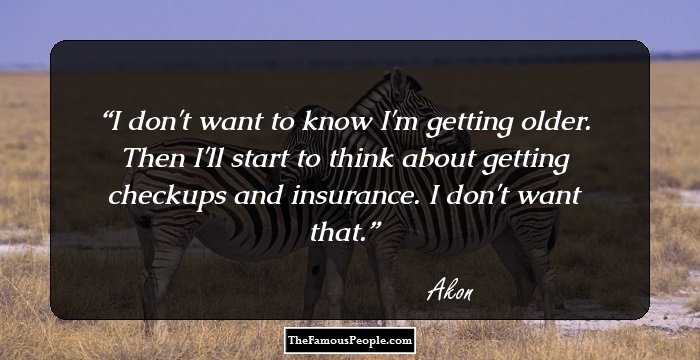 I don't want to know I'm getting older. Then I'll start to think about getting checkups and insurance. I don't want that.

I always feel like 'as long as I'm doin' what I love to do, the money's naturally gonna come.' When you start thinkin' business and you start thinkin' 'What's hot? What's the wave? Who is hot? Let's get at that person,' it becomes a point where you're tryin' to strategize to make money. And that's always a gamble.

Whatever obstacle comes your way, you gotta be prepared to jump over it! And I think that's what separates the legends from the regular artists. It's all in how you manage that success, and how you deal with the controversy when it actually comes.

You Think I
Akon

That's my actual payment, the fact that I can actually make something that I actually enjoy and put on repeat, and it's not related to anything else or anyone else's thoughts and ideas, it all came from me; I just love that aspect of it.

Me Love I
Akon

Any album that you pick up of mine, you know it's an Akon album. The guests are very limited, and you get to really feel the experience. You get the Akon experience when you get the albums. I always want to make sure that stays the way it is. I don't want to flood the album to where you lose focus on why you bought it.

You Experience I
Akon

While I'm here, I'm gonna milk it for all I can, so when I'm no longer hot - and I know that day is coming - I will step over here and enjoy everything I've created up to this point. The music is just opening all these doors, so I can relax.

Will Music I
Akon 36 Famous Quotes By Nick Cave, The Prince Of Darkness