Actor-producer Adrien Brody gained recognition with his role as Wladyslaw Szpilman in the film âThe Pianistâ. He became the youngest actor to win the âAcademy Awardâ for âBest Actorâ at the age of 29. Born to a Jewish father and a Catholic mother, he did not have much affiliation to either of the faiths. He grew up a mischievous wild kid. He was passionate about painting, music, photography, and visual art. Despite gaining fame at a relatively young age, he remained grounded. He believed that one had to work hard to survive in this competitive world. Besides acting and producing films, he hopes to be sitting in the directorâs chair one day. We have curated Adrien Brodyâs quotes from his films, interviews, etc. A look at some of Adrien Brody quotes on kindness, attention, integrity, success, hard work, imagination, trying, etc. 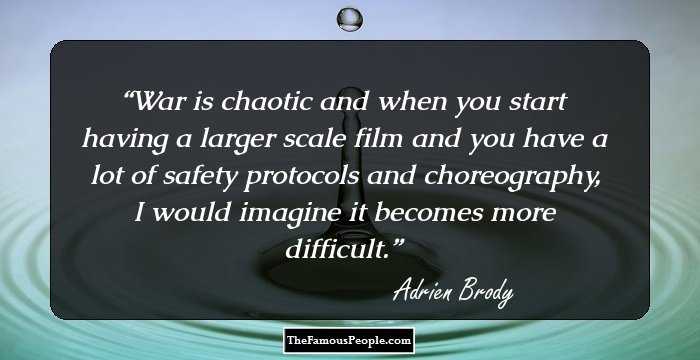 War is chaotic and when you start having a larger scale film and you have a lot of safety protocols and choreography, I would imagine it becomes more difficult. 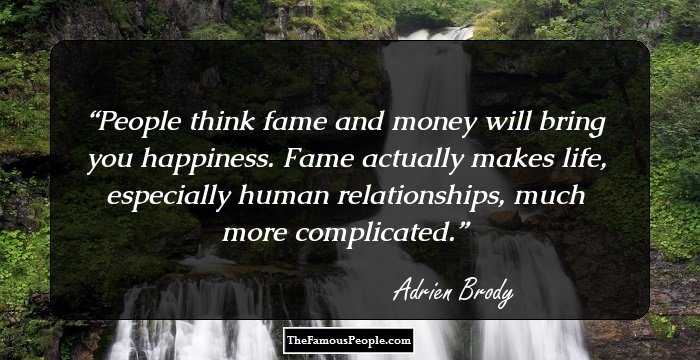 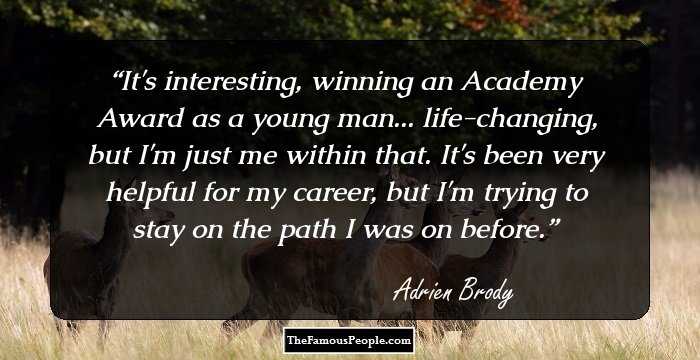 It's interesting, winning an Academy Award as a young man... life-changing, but I'm just me within that. It's been very helpful for my career, but I'm trying to stay on the path I was on before. 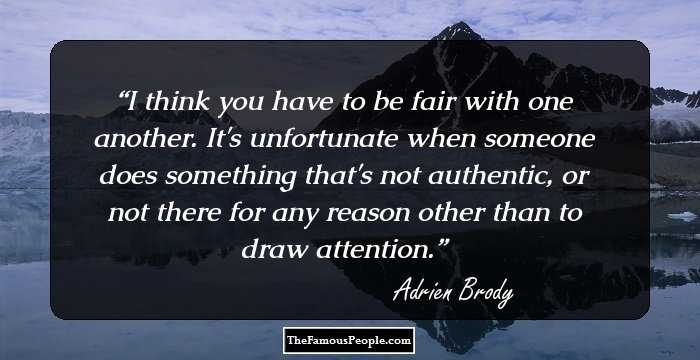 I think you have to be fair with one another. It's unfortunate when someone does something that's not authentic, or not there for any reason other than to draw attention. 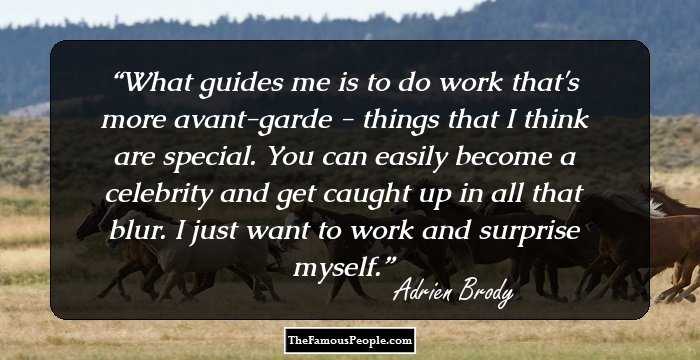 What guides me is to do work that's more avant-garde - things that I think are special. You can easily become a celebrity and get caught up in all that blur. I just want to work and surprise myself. 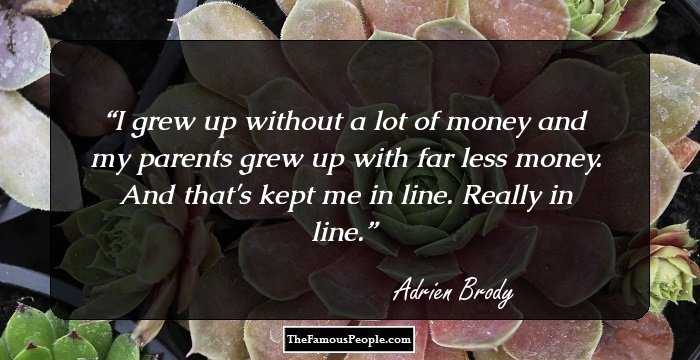 I grew up without a lot of money and my parents grew up with far less money. And that's kept me in line. Really in line. 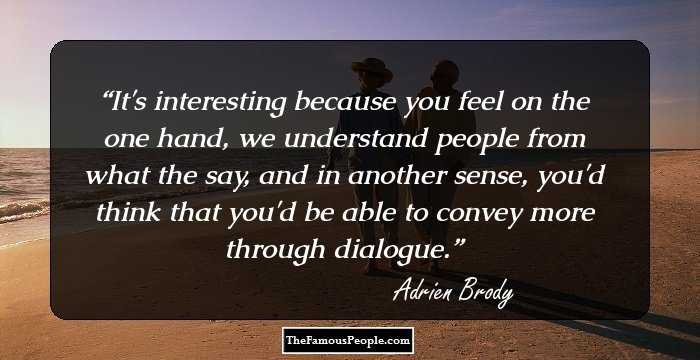 It's interesting because you feel on the one hand, we understand people from what the say, and in another sense, you'd think that you'd be able to convey more through dialogue. 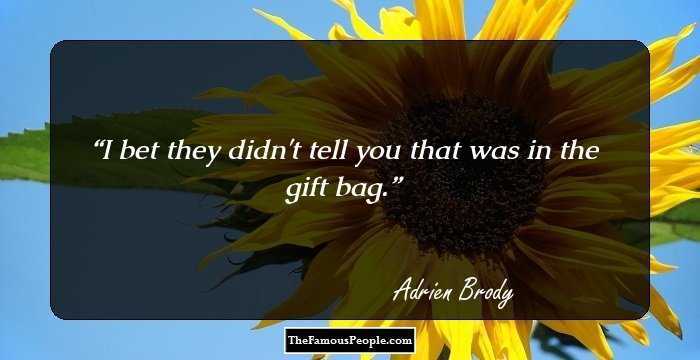 I bet they didn't tell you that was in the gift bag. 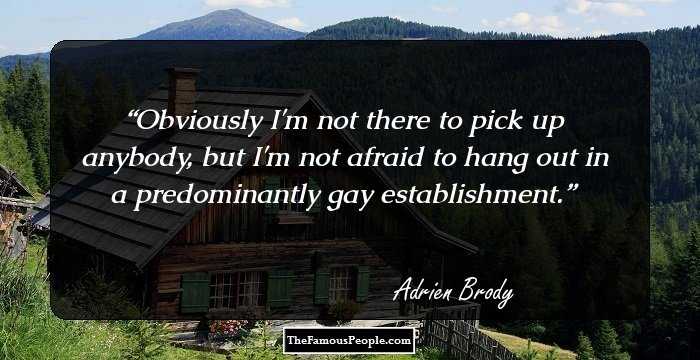 Obviously I'm not there to pick up anybody, but I'm not afraid to hang out in a predominantly gay establishment. 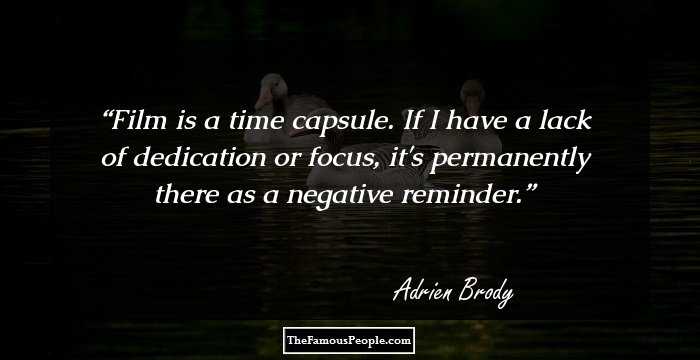 Film is a time capsule. If I have a lack of dedication or focus, it's permanently there as a negative reminder. 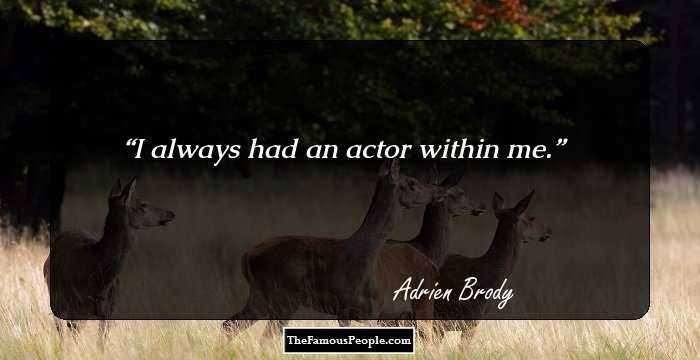 I always had an actor within me. 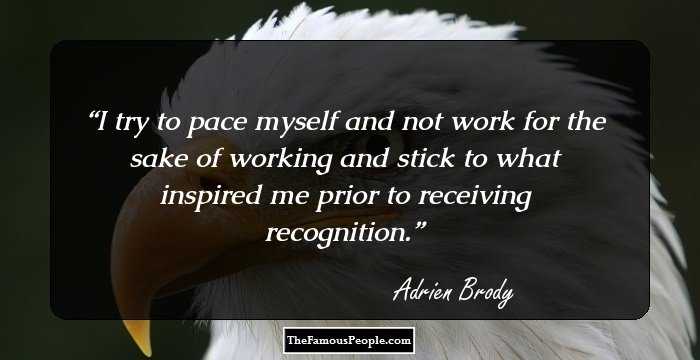 I try to pace myself and not work for the sake of working and stick to what inspired me prior to receiving recognition. 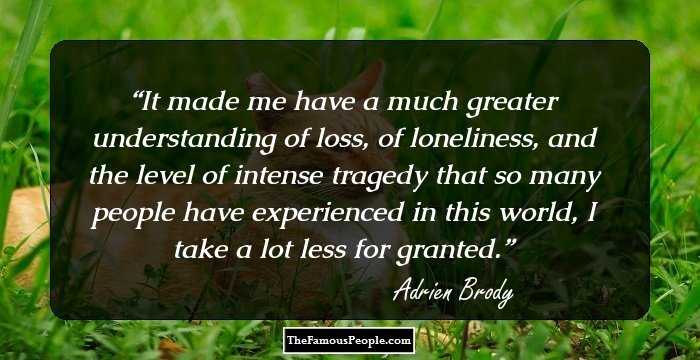 It made me have a much greater understanding of loss, of loneliness, and the level of intense tragedy that so many people have experienced in this world, I take a lot less for granted. 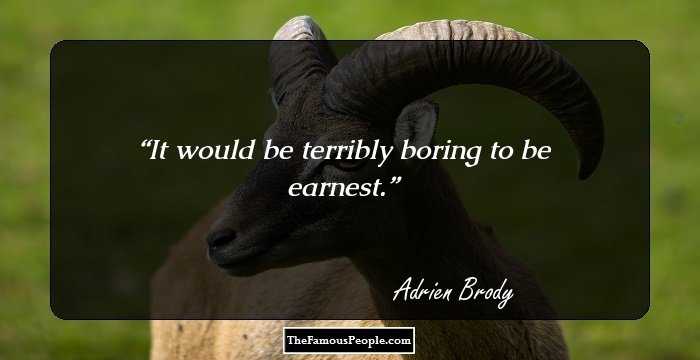 It would be terribly boring to be earnest. 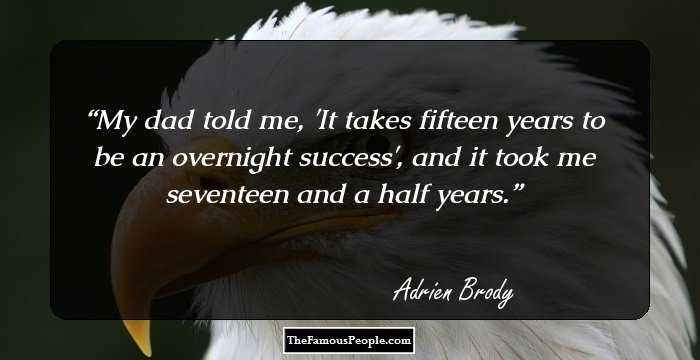 My dad told me, 'It takes fifteen years to be an overnight success', and it took me seventeen and a half years. 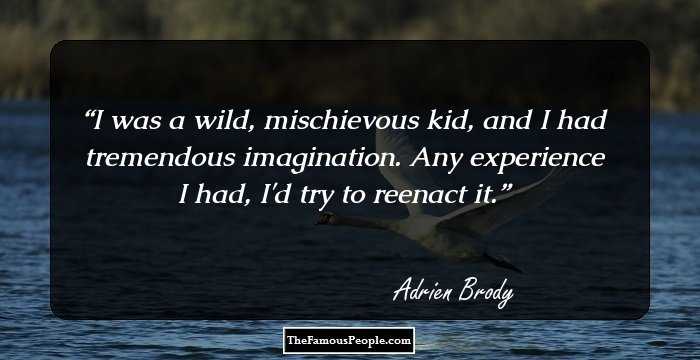 I was a wild, mischievous kid, and I had tremendous imagination. Any experience I had, I'd try to reenact it. 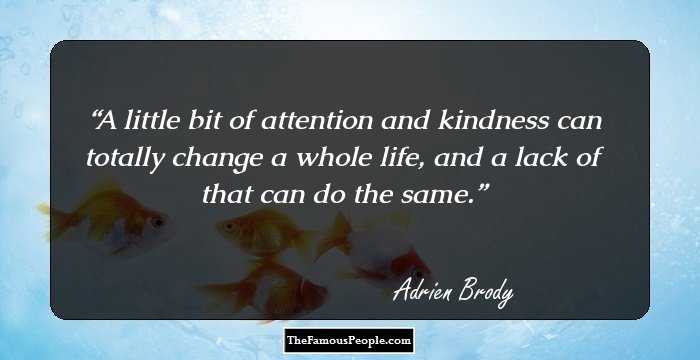 A little bit of attention and kindness can totally change a whole life, and a lack of that can do the same. 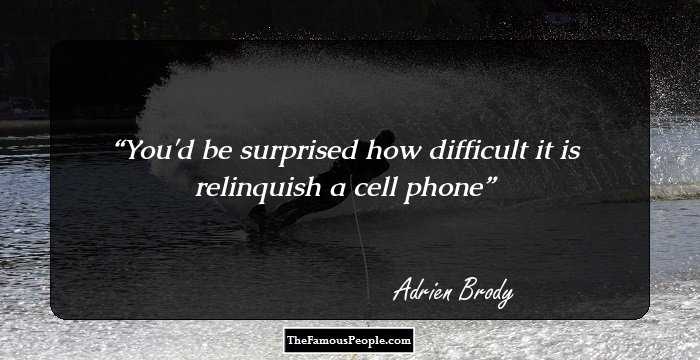 You'd be surprised how difficult it is relinquish a cell phone

There are the obstacles of your position as an actor, not being a commodity enough to be hired by the big directors for projects that have some kind of integrity, because the successful actors who've been in the game for a while want those roles. So there's more competition, so you have to work harder and be right for it.

Part of what attracted me to the village was it had a lot of parallels to contemporary issues. Like, fear and the way fear controls us. How the governing body of a town, or a nation, controls us through fear. They might mean well by it, but we are conditioned to be afraid of things. Fear of the unknown. Fear of terrorism. And it's unfortunate.

It's great when people appreciate your work, but I don't know how seriously to take it. The amazing thing is that I found something so early that I can support myself doing, and that can even be extremely lucrative, but I love it either way.

Doing interviews is very different from working as an actor, because it's up to the journalist not only to understand what I'm trying to convey, but to convey that understanding through their process. And often times it gets manipulated, sometimes intentionally, by pulling things out of context. Some people may not appreciate your work and some may be incredibly moved by it. So that isn't the concern. You have to do what you can do, and share what you feel is appropriate to share in the moment. And then, it's out of your control.

My parents have raised me with a sense of what's really important and have given me decent values, and I'm comfortable, but I haven't lived an excessive lifestyle in the least. And I've kept my expenses to a minimum so that I have the freedom to wait.

The normal routine is always the same thing whether it's on a new movie or a new job - there's always a process of getting to know one another. I think part of what makes movies special is that it is a relatively intimate environment and it's pretty short-lived - you get to know one another very quickly.

Depending on what my job requirement is, my techniques change. If something is incredibly difficult to connect to, and painful, then I have to do a lot of work to connect to that and not joke around or lose sight of my job.

The problem is when you become so well known that everyone is watching you and you don't have an opportunity to observe. It's something that I don't want to lose. I like being unnoticed when I don't feel like being noticed. It's not like I crave attention all the time. Something that I've always loved and appreciated is the chance to see something about someone's character, observe and kind of retain it, and study it without feeling like I'm studying it. I have an intense curiosity. And it would be a shame if I lose the ability to do that.

I did a real boot camp once which with The Thin Red Line which was learning military exercises and this was far less strenuous. I really had a blast. We were all kind of thrown into the woods and we didn't have any of the modern conveniences that we take for granted. Learned how to survive without anything. 79 Adam Sandler Quotes That Will Make Your Day