22 Notable Quotes By A. E. Van Vogt For Sci-Fi Scribblers

Famous As: One of the Most Popular and Influential Practitioners of Science Fiction Writers in the Mid-20th Century
Born On: April 26, 1912
Died On: January 26, 2000
Born In: Gretna, Canada
Died At Age: 87
A. E. van Vogt was a distinguished Canadian science fiction author. He is considered as one of the most ingenious writers of his genre in the Golden Age. He started his writing career with pulp magazine taking up true-confession style writing. However, after few years he shifted to writing science fiction which he enjoyed writing more. In 1941, he quit his job at the Canadian Department of National Defence and became a full-time writer. With a career spreading over six decades the prolific writer wrote around 39 novels and a number of short-stories. Some of his popular novels include âThe Universe Makerâ, âSlanâ, âEmpire Of The Atomâ, âThe Voyage Of The Space Beagleâ and âBlack Destroyerâ amongst others. His thoughts, writings, works and stories revolved around temporal conundrum theme. Read through the corpus of quotes and sayings by A. E. van Vogt which have been extricated from his books, writings, novels, short stories, work and life.
Listed In:
Writers 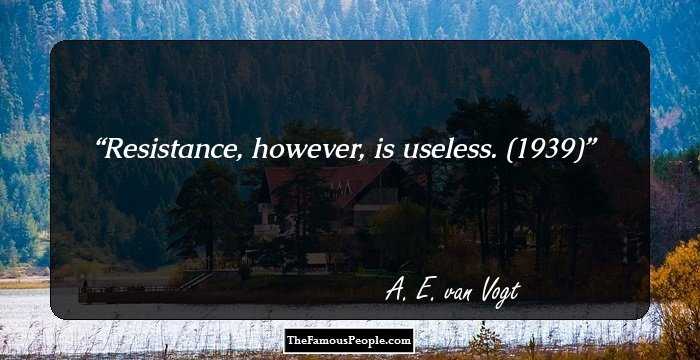 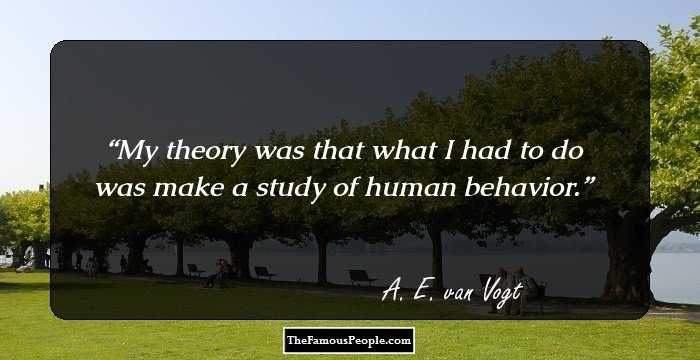 My theory was that what I had to do was make a study of human behavior. 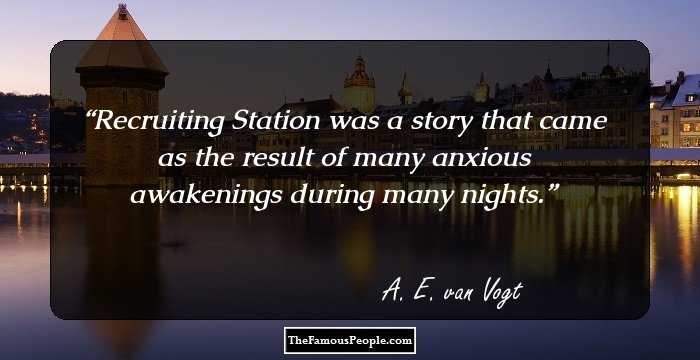 Recruiting Station was a story that came as the result of many anxious awakenings during many nights. 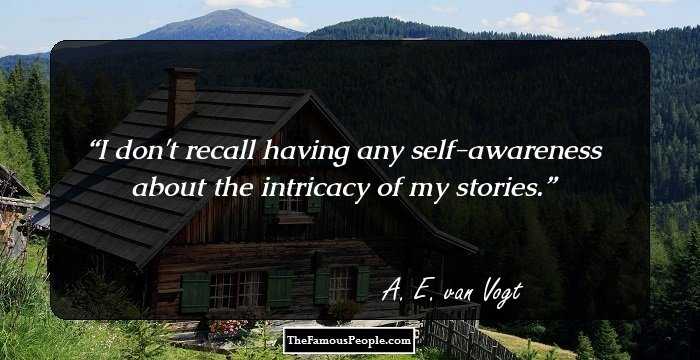 I don't recall having any self-awareness about the intricacy of my stories. 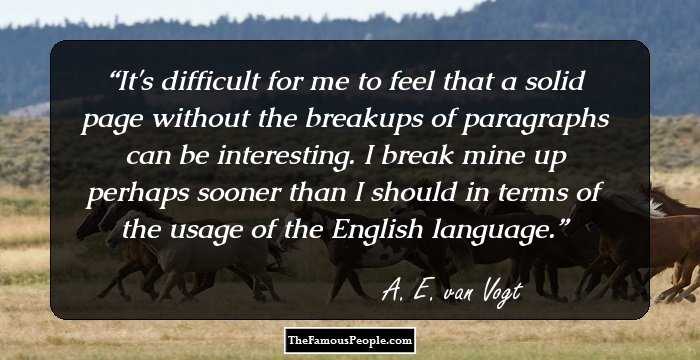 It's difficult for me to feel that a solid page without the breakups of paragraphs can be interesting. I break mine up perhaps sooner than I should in terms of the usage of the English language. 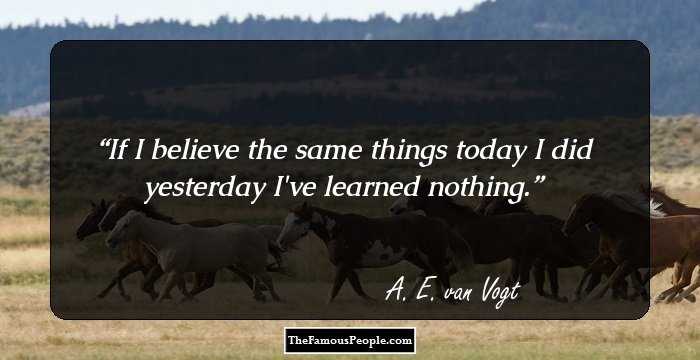 If I believe the same things today I did yesterday I've learned nothing.

Believe I
A. E. van Vogt 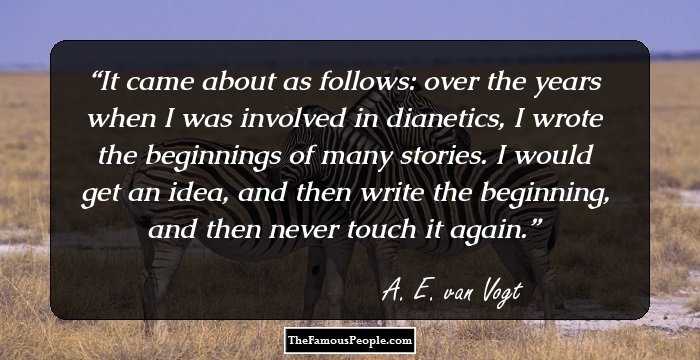 It came about as follows: over the years when I was involved in dianetics, I wrote the beginnings of many stories. I would get an idea, and then write the beginning, and then never touch it again. 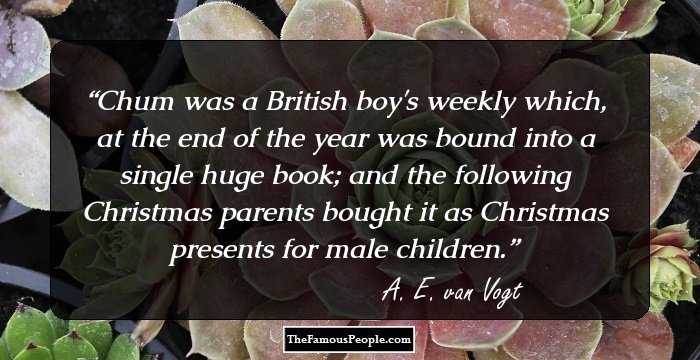 Chum was a British boy's weekly which, at the end of the year was bound into a single huge book; and the following Christmas parents bought it as Christmas presents for male children. 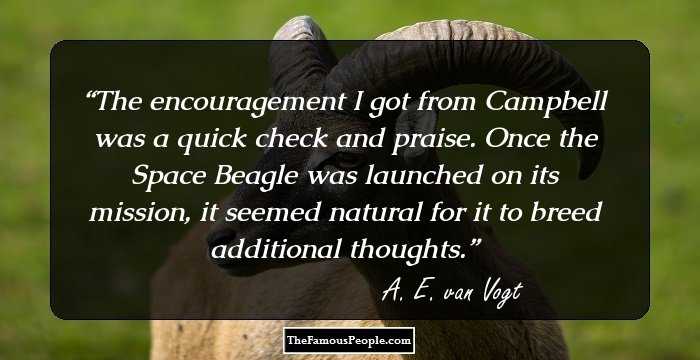 The encouragement I got from Campbell was a quick check and praise. Once the Space Beagle was launched on its mission, it seemed natural for it to breed additional thoughts. 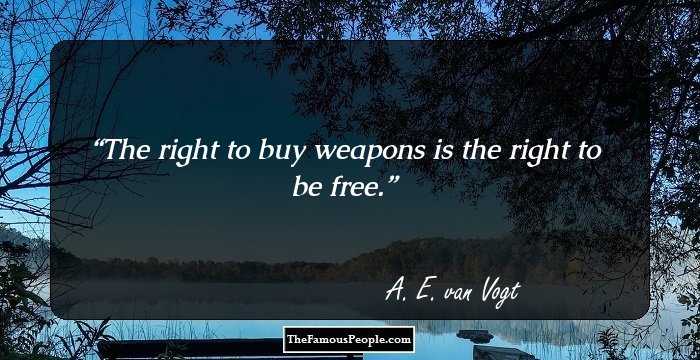 You have to remember that I was a bright but simple fellow from Canada who seldom, if ever, met another writer, and then only a so-called literary type that occasionally sold a story and meanwhile worked in an office for a living.

You Living I
A. E. van Vogt 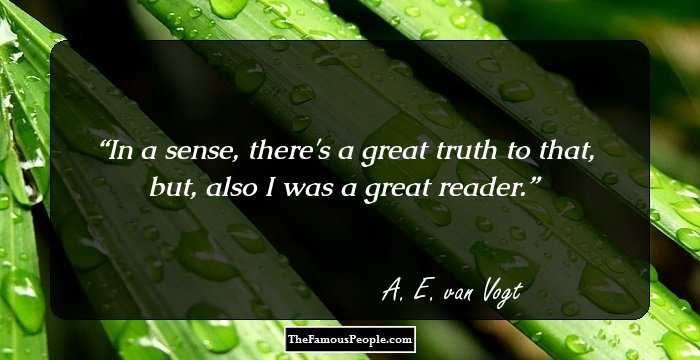 In a sense, there's a great truth to that, but, also I was a great reader. 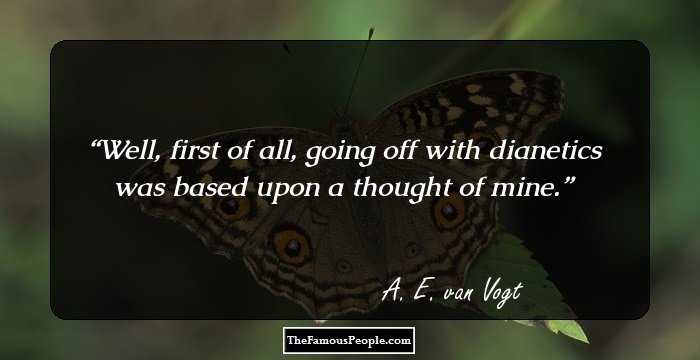 Well, first of all, going off with dianetics was based upon a thought of mine. 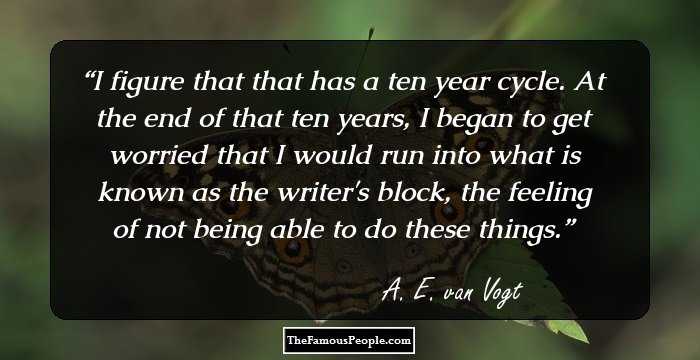 I figure that that has a ten year cycle. At the end of that ten years, I began to get worried that I would run into what is known as the writer's block, the feeling of not being able to do these things. 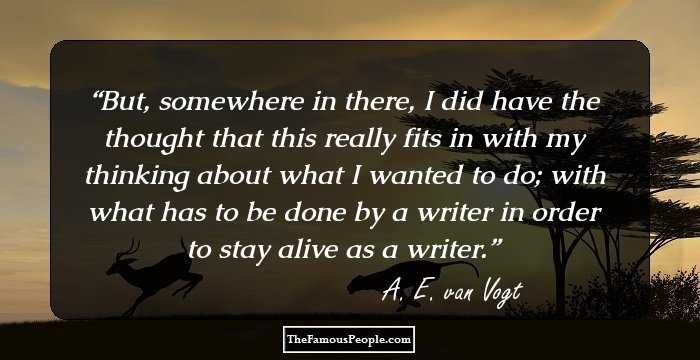 But, somewhere in there, I did have the thought that this really fits in with my thinking about what I wanted to do; with what has to be done by a writer in order to stay alive as a writer. 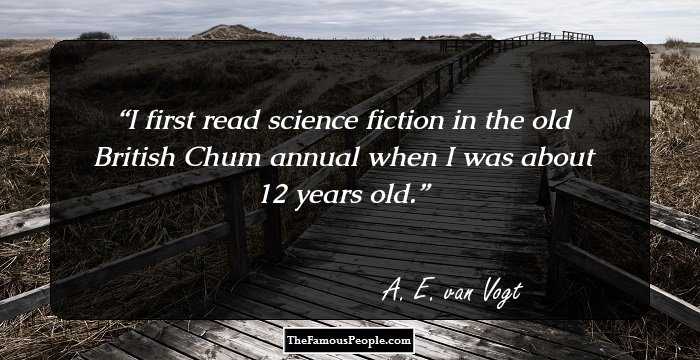 I first read science fiction in the old British Chum annual when I was about 12 years old. 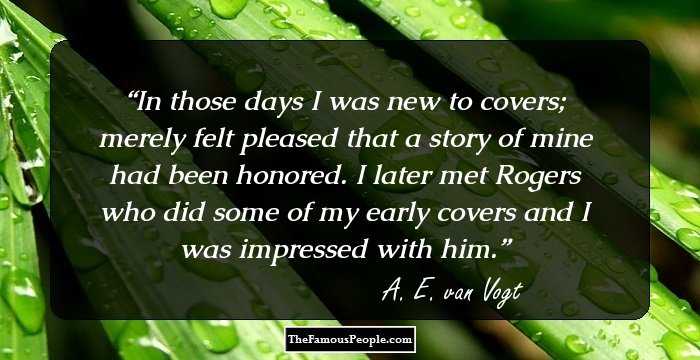 In those days I was new to covers; merely felt pleased that a story of mine had been honored. I later met Rogers who did some of my early covers and I was impressed with him. 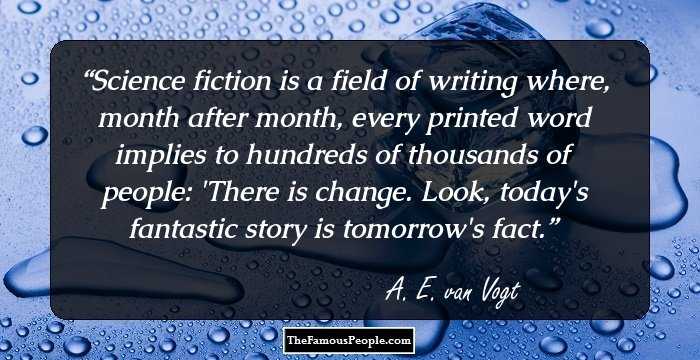 Science fiction is a field of writing where, month after month, every printed word implies to hundreds of thousands of people: 'There is change. Look, today's fantastic story is tomorrow's fact. 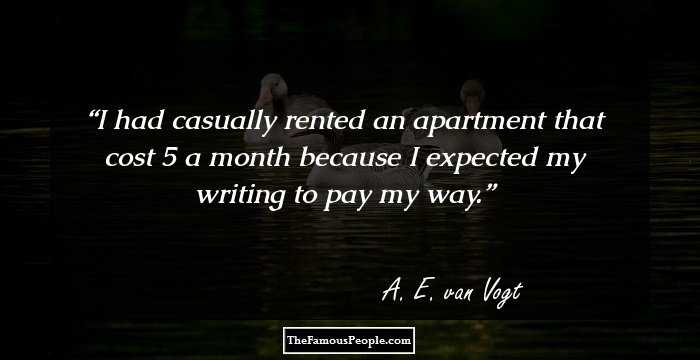 I had casually rented an apartment that cost $75 a month because I expected my writing to pay my way. 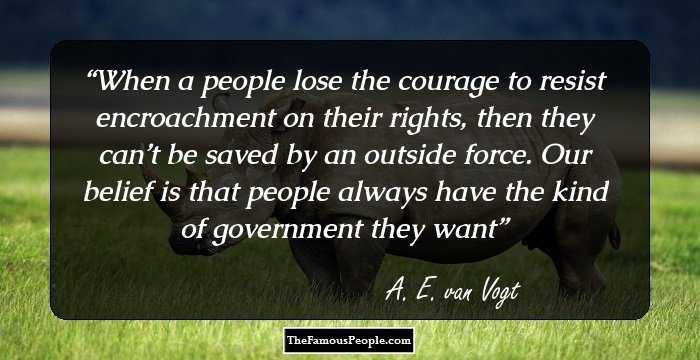 When a people lose the courage to resist encroachment on their rights, then they canât be saved by an outside force. Our belief is that people always have the kind of government they want 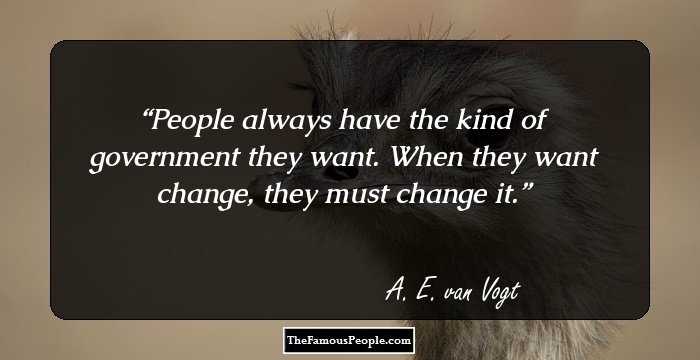 People always have the kind of government they want. When they want change, they must change it. 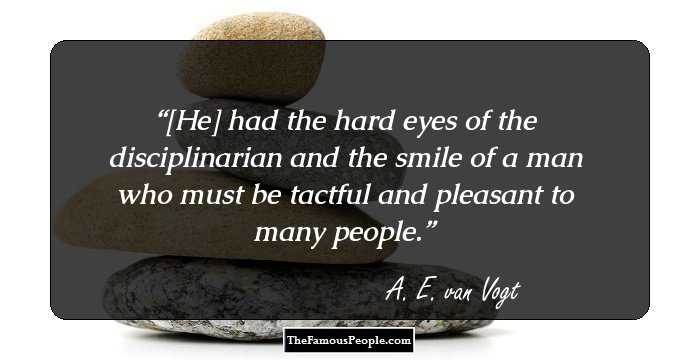 [He] had the hard eyes of the disciplinarian and the smile of a man who must be tactful and pleasant to many people. 227 Powerful Quotes By Margaret Atwood That Will Enlighten You 90 Inspiring Quotes by Alice Munro, The Author of Open Secrets